Accessibility links
America Is Angry, Very Angry. Why That's Not All Bad We've gone through angry times before in this country: Vietnam, Redbaiting, the Depression, Reconstruction and the Civil War. But historically, eventually, we always seem to sort of get over it. What can we learn from the anger-recovery periods of American history?

America Is Angry, Very Angry. Why That's Not All Bad

America Is Angry, Very Angry. Why That's Not All Bad 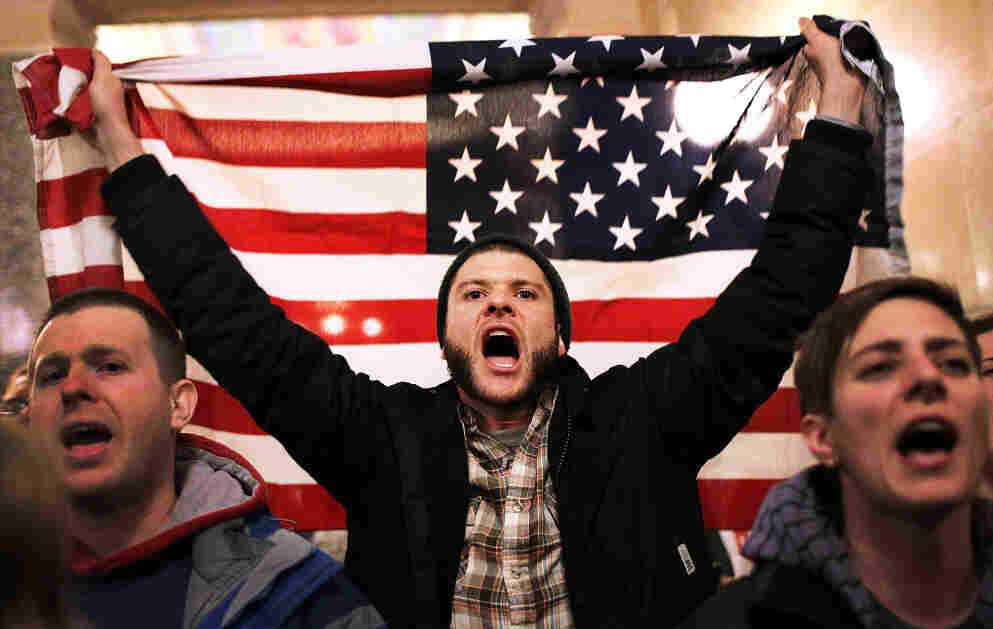 For so many reasons, Americans are seething. Here, a protester shouts as he holds an American flag after storming the Wisconsin state Capitol in Madison last March, after Republicans in the state Senate voted to curb collective bargaining rights for public workers. Justin Sullivan/Getty Images hide caption 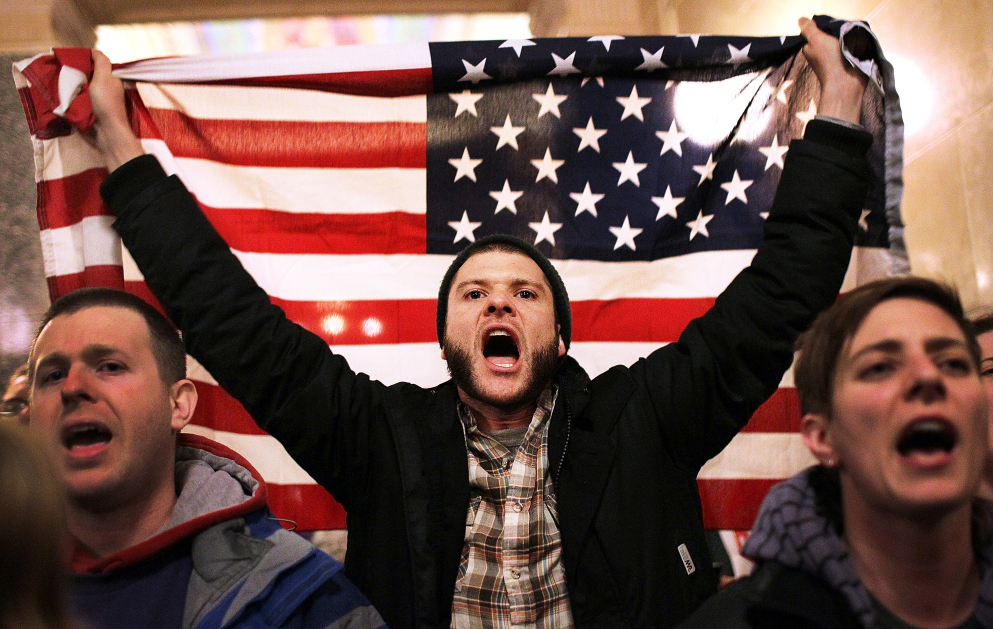 For so many reasons, Americans are seething. Here, a protester shouts as he holds an American flag after storming the Wisconsin state Capitol in Madison last March, after Republicans in the state Senate voted to curb collective bargaining rights for public workers.

Through the smog and the smeariness of the seemingly ceaseless process of selecting a president, one thing is clear: Americans are seething.

Some Americans are livid over illegal immigration. Others are ticked off about Obamacare. President Obama himself is not too happy about the way things are. "If one emotion came through in President Obama's State of the Union address," Forbes magazine notes, "it was anger."

Newt Gingrich growls every chance he gets: "I am angry, and every American should be angry" about what he calls Mitt Romney's dishonesty. Recently rising Rick Santorum tells Fox News that Romney's health plan is "something to get mad about."

Tempers flared during Florida's primary in January, and former Gov. Charlie Crist told MSNBC that he was struck by the tone of the Republican Party. "This past week or 10 days in Florida," Crist said, "it has been a very angry tone, and regrettably, amazingly negative. My hope is, as a Floridian, as an American, we can get away from that negative tone."

Good luck. We are in an angry, angry time. On the right, the Tea Party stages protests. On the left, the Occupy movement occupies. The Arizona governor wags an angry finger in the president's face. Candidates snarl at one another. Voters yell at candidates. Everybody is angry about something, even if it's just about the anger of everybody else.

We've gone through angry times before in this country: Vietnam, Redbaiting, the Depression, Reconstruction and the Civil War. The Revolution itself was sparked by a bunch of choleric colonists. So it's in our collective DNA.

But historically, eventually, we always seem to sort of get over it. So how did we do that? Are there lessons to be learned in the anger-recovery periods of history?

Why assume that anger is always something to 'get over?'

An individual who needs to get over being outraged in order to live a more productive and harm-free life can sometimes get help. Anger managers have strategies for escorting people through periods of pique.

The emotion of anger, explains Rich Pfeiffer, president of the National Anger Management Association, "activates the 'primitive' human brain — sometimes called the limbic system — which is automatic and impulsive, and if you are functioning out of the primitive part of your brain, you tend to want to punish, hurt, get back at, teach a lesson, or do something destructive to the person triggering your anger."

Anger managers tell us that we should slow down our reaction to anger "in order to have time to respond out of our more evolved brain — sometimes called the neocortex — which has the capacity to be reasonable, rational and logical," Pfeiffer says.

Courses in managing fury suggest taking deep breaths, going for a walk — anything to separate yourself from the source of your anger.

A nation, on the other hand, doesn't always have time to count to 10 or the ability to get away from itself. It doesn't always recover quickly or easily from periods of anger. And some historians are not so sure that it should.

"Why assume that anger is always something to 'get over?' " asks Jane Dailey, who teaches American history at the University of Chicago. "Is it always negative or unproductive? Obviously we don't want to devolve into assaults on the floor of the Senate — although I can think of one or two people who might benefit from caning — but there are times when rage is productive."

Ushering the country through angry, divisive periods, says Mary Niall Mitchell, an American history professor at the University of New Orleans, has traditionally required a couple of things — a sort of two-step recovery program.

The first step, Mitchell says, is some crisis or occurrence "that took the collective attention away from the source of anger."

The second step is "a great deal of forgetting," she says. "That forgetting — which is not to say forgiving — depended, in part, on the telling of new stories about the recent past."

The creation of a new historical memory, one that was at odds with the historical record, Mitchell says, "generally came at a great cost."

She uses the Civil War and Reconstruction to illustrate. The crises that distracted the angry nation in the wake of the war, she says, were a financial panic and wars against Native Americans in the West. The forgetting was the explanation by certain historians of the war's aftermath "as one of reunion between the North and South achieved by rewriting the history of the Civil War," Mitchell explains. "It was no longer a war to end slavery — in this interpretation — but rather a war over 'states' rights,' indeed, a war between brothers; and it was time, many argued in the 1890s and later, for the brothers to bury the hatchet."

The Confederacy took on a romantic glow — with the myth of the "Lost Cause" — Mitchell says, and the South was portrayed in movies such as Birth of a Nation and Gone with the Wind "as a 'lost civilization' where all slaves were happy and all hell broke loose with emancipation."

Mitchell says that, as historian David Blight has pointed out, Frederick Douglass foresaw the revisionism coming and the worsening plight of African-Americans as the nation set about getting past its anger.

"Douglass, of course, was angry having fought so hard for African-American freedom and citizenship," Mitchell says. And "you could argue that the leaders of the civil rights movement carried forward Douglass' anger and frustration, and were able to restore the rights that Reconstruction's aftermath had eliminated."

So, says Mitchell, "with my historian's hat on, I'm leery of the notion of getting over the anger. The lesson, I suppose, is to always remember exactly why we were angry in the first place."

There are, then, ways for a nation to soldier through angry eras. We have seen in recent times how a crisis — say Sept. 11 or the Tucson shootings — can refocus our attention and repurpose our emotions.

But in this day and age, forgetting may not be as simple — or as acceptable — as it once was. With our deep databases, powerful search engines and countless websites, blogs and bulletin boards and interminably talkative media, it is arguably easier to remember — and easier to remind others — about the inaction or injustice that originally made us mad. Really, really mad.