Accessibility links
The Ballad Of The Tearful: Why Some Songs Make You Cry A musical device called an appoggiatura creates tension and emotions, says one musical psychologist. Also, "a good song allows us, the listeners, to walk through the songwriter or composer's thoughts and emotions as they wrote the song," says Dan Wilson, who co-wrote "Someone Like You" with Adele.

Listen
The Ballad Of The Tearful: Why Some Songs Make You Cry 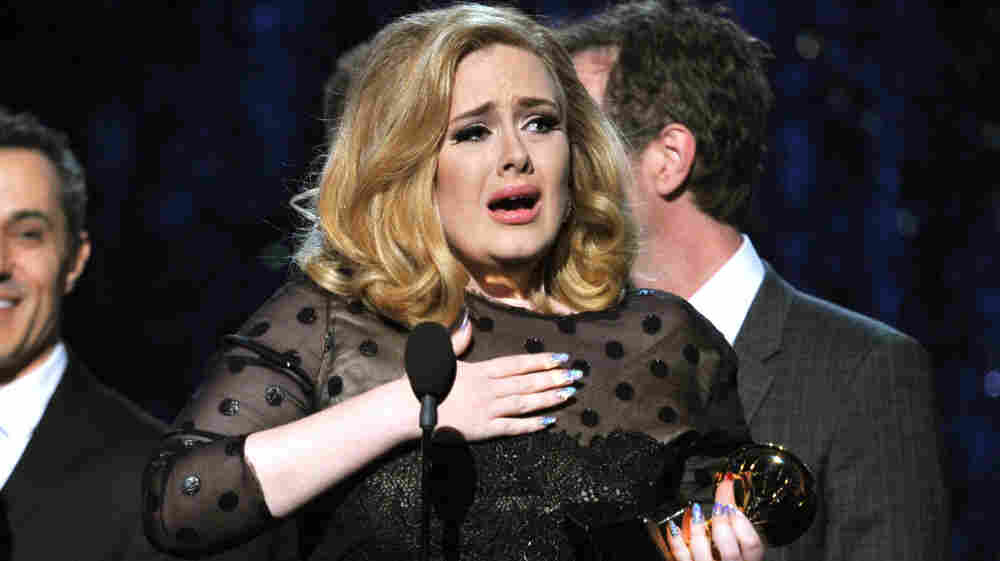 Adele won the song of the year category at this year's Grammy Awards for her tear-jerker "Someone Like You." Kevin Winter/Getty Images hide caption

Note: A number of listeners responded to this story and said the definition of appoggiatura was incorrect. Music commentator Rob Kapilow has a second opinion here.

British singer Adele won six Grammy Awards on Sunday night, including one for her aching ballad "Someone Like You." What is it that makes a song like hers such an emotional powder keg?

You know the feeling. It's one like this: "Your hair's standing up on end, shivers going down your spine, a lump coming into your throat, even tears running down your eyes," says John Sloboda, a professor of music psychology at London's Guildhall School of Music and Drama. Sloboda has studied physical reactions to music and found that one musical ornament in particular triggers a strong emotional reaction.

It's called an appoggiatura, from the Italian word "to lean." And while it's tough to define, it's not unlike a grace note. It's sometimes dissonant and resolves into a main note. The Wall Street Journal, which wrote about the appoggiaturas in Adele's song, says it can be easily heard when Adele sings the word "you" in the chorus. Have a listen:

According to Sloboda, that little vocal dip in there on the word "you" — that's the key to triggering an emotional response in a listener.

The Tears Are Universal

"Our brains are wired to pick up the music that we expect," says Sloboda. So when we're listening to music, our brain is constantly trying to guess what comes next. "And generally music is consonant rather than dissonant, so we expect a nice chord. So when that chord is not quite what we expect, it gives you a little bit of an emotional frisson, because it's strange and unexpected."

When Adele bounces around the note on "you," there's a tension that is then released, Sloboda explains.

"The music taps into this very primitive system that we have which identifies emotion on the basis of a violation of expectancy," he says. "It's like a little upset which then gets resolved or made better in the chord that follows."

All Things Considered host Melissa Block put Sloboda's theory to someone with a bit of insider knowledge about Adele's song: Dan Wilson, who co-wrote "Someone Like You" with Adele.

Wilson says he first heard of the term appoggiatura in the Journal article. "[The article] sort of talked about how Adele and I had used this secret trick about putting appoggiaturas in, but I didn't know what that was."

He has another theory about the song's roiling emotions.

"A good song allows us, the listeners, to walk through the songwriter or composer's thoughts and emotions as they wrote the song," he says. "That's why when you listen to The Replacements, you get this kind of giddy drunk feeling, probably because they were drunk when they recorded and wrote their song."

"With Adele, we wrote this song that was about a desperately heartbreaking end of a relationship, and she was really, really feeling it at the time, and we were imaginatively creating," Wilson says. "That walked her back through that experience. And when you and l listen to that song, we walk through her shoes through that heartbreaking experience — but it's in our imagination. And so instead of being devastating, we're like children play-acting. We get to have an imaginative experience."

"Hey, if I had a scientific method for making a heartbreaking hit, I would do it every day," Wilson says with a chuckle. "But it's not so easy."