Accessibility links
Mendocino Snuffing Medical Marijuana Experiment The federal government is cracking down on California's medical marijuana industry. On Tuesday, the county that's gone the furthest in embracing the pot economy is expected to throw in the towel. Mendocino County in California plans to shut down its program that issued permits to pot growers. 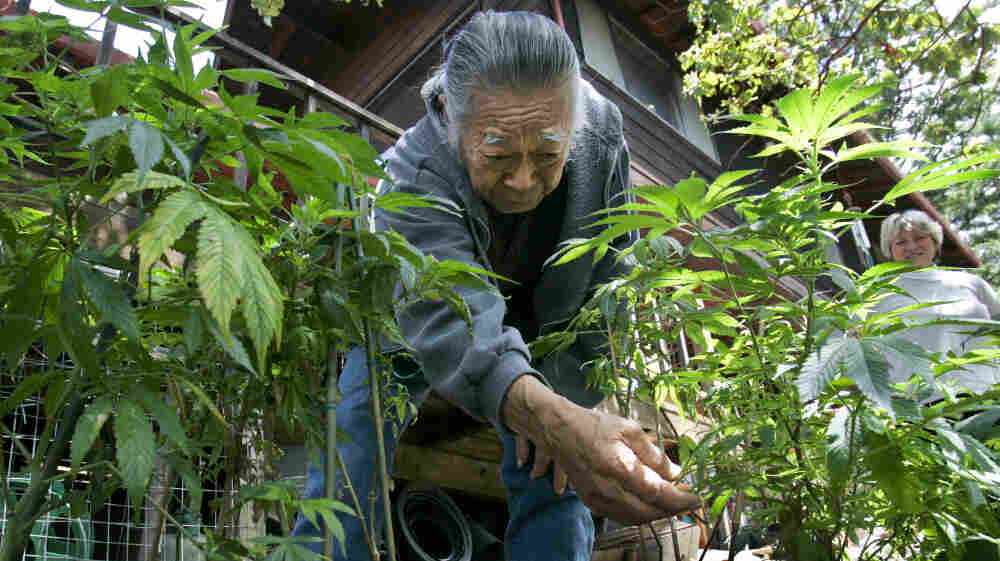 George Hanamoto inspects some marijuana plants he's growing as his wife, Jean, looks on at their home in Mendocino County, Calif., in 2008. Rich Pedroncelli/AP hide caption 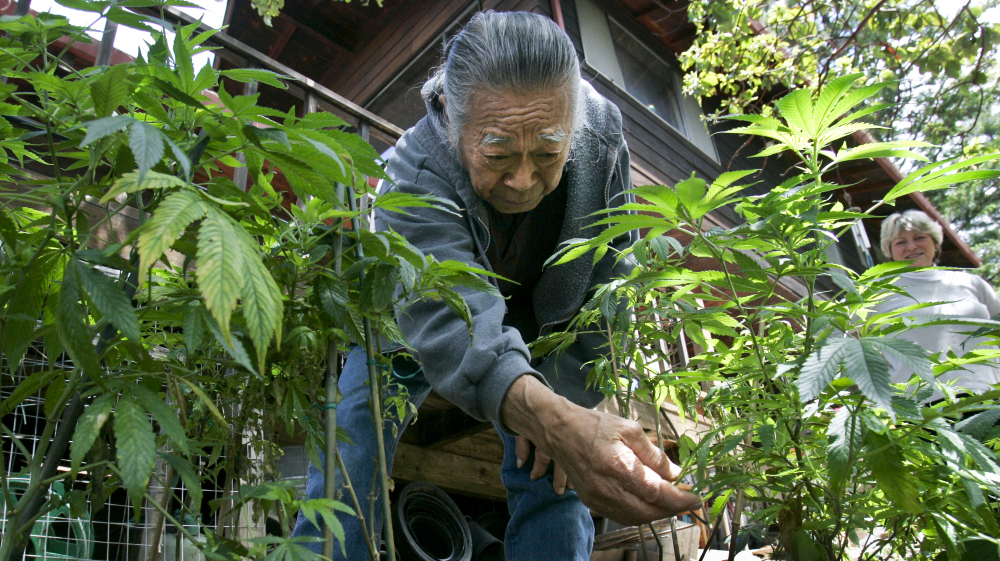 George Hanamoto inspects some marijuana plants he's growing as his wife, Jean, looks on at their home in Mendocino County, Calif., in 2008.

This story is part of a collaboration between member station KQED and the Center for Investigative Reporting's California Watch.

Mendocino County in Northern California is expected Tuesday to end an unusual program that put pot growing under supervision of the local sheriff. It was the first effort of its kind in the nation and proved a success, at least in the eyes of many locals. But federal officials had a different view.

'Finally Part Of The County'

They gave the job to a barrel-chested sheriff's sergeant named Randy Johnson. The program earned the sheriff's department more than half a million dollars and enlisted nearly 100 growers.

One of those, George Unsworth, says he grew marijuana "guerrilla-style" for decades before he joined the county's cultivation program. He says he loved finally being on the right side of the law

"I cannot describe the joy of feeling that we were finally part of the county, not the outcasts," Unsworth says.

After California voters legalized medical marijuana use 16 years ago, the state never determined how pot should be produced. It left such regulations to local authorities and so far, only Mendocino has taken on the challenge.

But in October, federal prosecutors went on the offensive against California's marijuana industry, closing dozens of storefront dispensaries and seizing properties.

"The law has been hijacked by profiteers who are motivated not by compassion but by money," Haag says.

She also warned cities and counties that marijuana-licensing schemes were against federal law. Soon after, heavily armed Drug Enforcement Administration agents raided a farm in Mendocino owned by one of the county's legal growers.

Former federal prosecutor Joe Russoniello says allowing sick people to use medical marijuana is one thing, but it's quite another for a county like Mendocino to issue permits to marijuana growers and allow them to sell their product around the state.

"As soon as you cross county lines, packaging it, suggesting you have a client base or patients or members, you are basically a commercial enterprise for profit and in violation of state and federal law," Russoniello says.

Mendocino Given An Ultimatum

"It made me a little bit distrustful. I'm hoping this wasn't intentional saber rattling," he says. "I'm hoping they weren't saying, 'Well if we show Mendocino County that we mean business, then all these other counties are going to back off.' Really?"

The issue finally came to a head at a board of supervisors meeting. In a packed conference room, dozens of anxious growers spoke out in support of the regulations, including Unsworth.

"I voluntarily would do anything to keep the program going," Unsworth said. "And I think I speak for most of the other people who were in my position, that would run in the woods when the helicopters came flying."

"This ordinance has subjected the entire medical cannabis community of Mendocino County and the state of California to intense federal scrutiny, which we don't want or need," Johnson says. "To me, it wasn't worth the trouble it caused."

Fight May Not Be Over

In the end, Mendocino officials concluded they couldn't afford a legal fight with the federal government, and agreed to gut the regulations. They're expected to formally end the program on Tuesday.

All of it left County Board Chairman John McCowen exasperated.

But the fight might not be over. A group of Mendocino growers is hoping to revive the program in time for the spring planting as a voluntary and private effort.