Accessibility links
A Pragmatic Princeling Next In Line To Lead China The son of a communist revolutionary hero who was later imprisoned, Xi Jinping is set to become China's next leader. Family members and friends paint a portrait of a humble man with an appetite for knowledge, who is an efficient administrator and an open-minded politician. 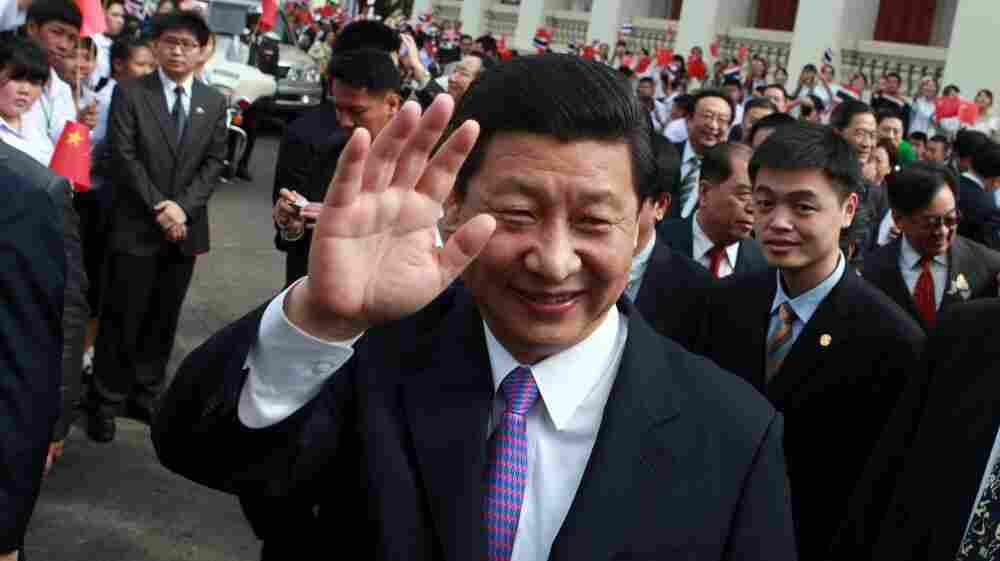 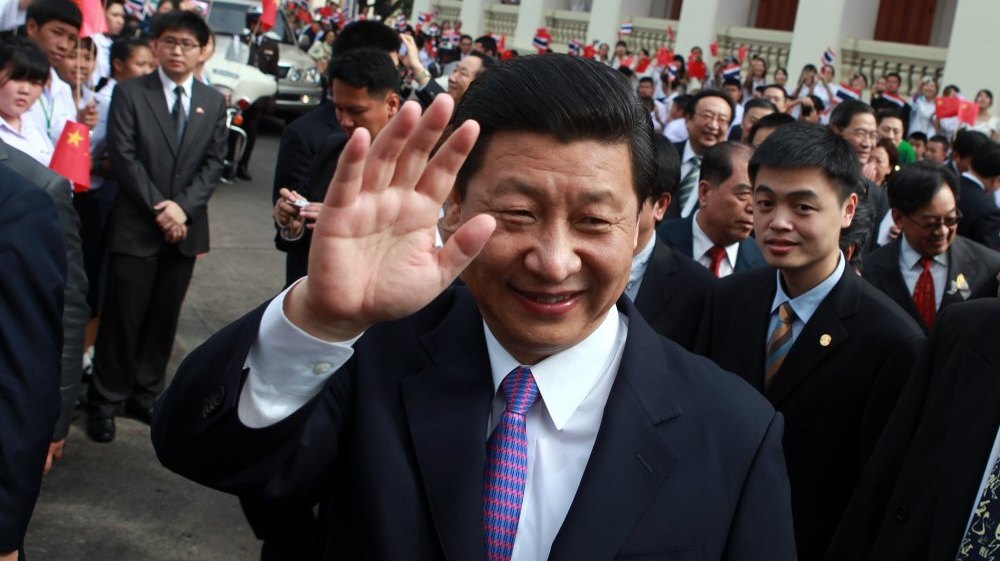 Chinese Vice President Xi Jinping, shown here in December 2011 waving to students during a visit to Bangkok, Thailand, is in line to become China's leader next year.

In northwestern China's Shaanxi province, a neatly manicured and landscaped memorial park the size of six soccer fields is one sign of the revolutionary lineage of Xi Jinping, the man set to become China's next leader.

Known as a Communist Party princeling, Xi is the 58-year-old son of Xi Zhongxun, a deputy prime minister and revolutionary hero who died in 2002.

The elder Xi was born in Fuping county in Shaanxi, more than 600 miles southwest of Beijing, and is considered a hometown hero.

On a recent day at the memorial park, a man who gives his name as Li says Xi Zhongxu "liberated the poor masses, and allowed us to live a good life." The man is referring to Xi's role as the architect of Deng Xiaoping's special economic zones, which played an important role in China's process of reform and opening up.

But in the memorial hall devoted to Xi, decades of his life are undocumented. That's because he fell out of favor in 1962, accused of disloyalty to the party. He spent many of the intervening 16 years in jail, some of it in solitary confinement, until he was rehabilitated in 1978. 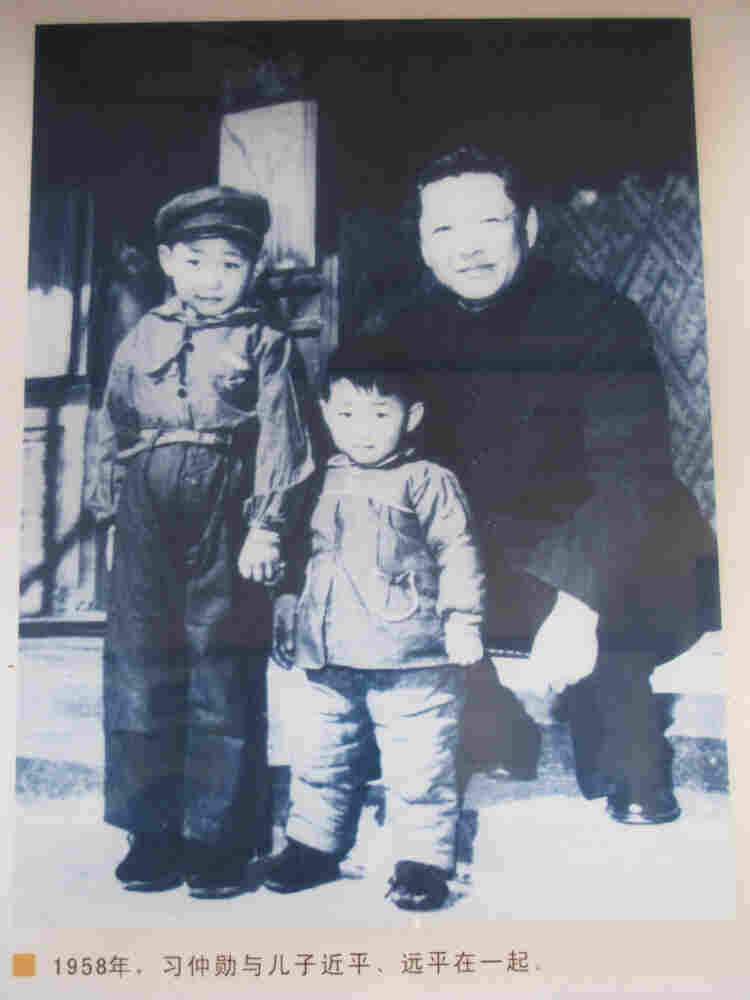 A family photograph from 1958 showing Xi Jinping (left), 5, with his brother Yuanping and father, Xi Zhongxun, is on display at a museum in Xi Zhongxun's hometown in China's Shaanxi province. Louisa Lim/NPR hide caption

His son, Xi Jinping, also suffered: He was labeled a "reactionary student" when he was just 14 years old, according to the state-run Shaanxi Farmers' Daily newspaper.

Despite that, the younger Xi — China's current vice president — spent much of that time trying to join the very Communist Party that was persecuting his father, applying as many as 10 times before his application was accepted in 1974, according to the Hong Kong newspaper Ming Pao, citing an article said to be written by Xi himself.

"At that time, if you want to have a career, you do need to have that ticket," says Cheng Li, a senior fellow at the Brookings Institution, explaining how joining the Communist Party was the only chance of social mobility in the political context of that era.

An Understanding Of Rural Life

From age 15, Xi Jinping was sent to live in the countryside, spending seven years in a remote Shaanxi village, first as an ordinary farmer, then as a low-level official.

"He told Chinese official media many times that was his formative experience. He learned a lot of things: humanity, humility, adaptability and endurance," Li says. "Certainly it also gave him a chance to understand rural China."

Xi's relatives still live at the ancestral home where his father grew up in Zhonghe village. His 81-year-old uncle, Xi Zhongfa, uses the one-story earthen hut with dirt floors as storage space. Eighteen years younger than Xi Zhongxun, the old man simply says of his older brother, "He was good to me."

Life is still hard in the village. These elderly relatives still don't have hot water inside their house, and depend on an outside faucet for cold water. They say they don't enjoy any perks, and the only sign of their famous relative is a small, broken plastic sign on the wall of the ancestral home, attesting to the fact that Xi Zhongxun lived there.

Xi Jinping has been back to the village at least twice to visit, and many neighbors appear to have been impressed as much by his generous girth as the low-key manner of his visit.

According to Xi's aunt, Ding Fengqin, he gave the relatives a coded warning against corrupt or unseemly behavior. 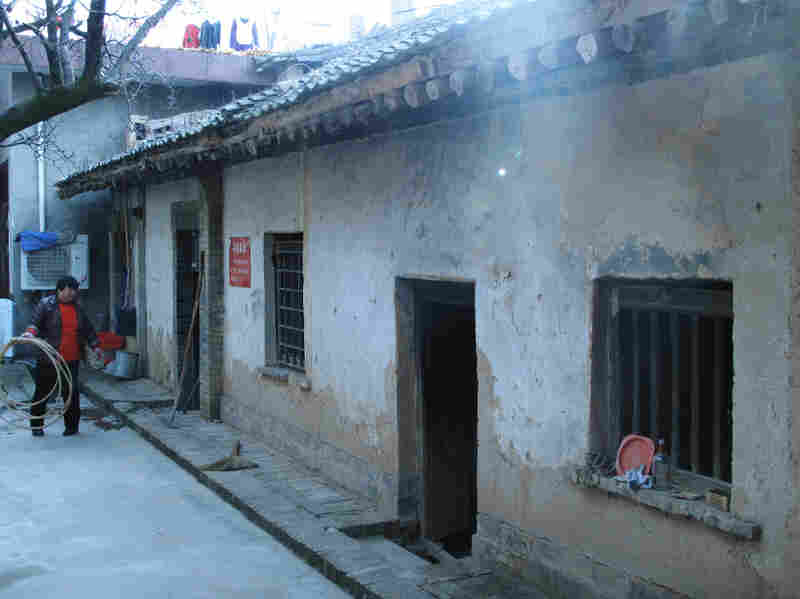 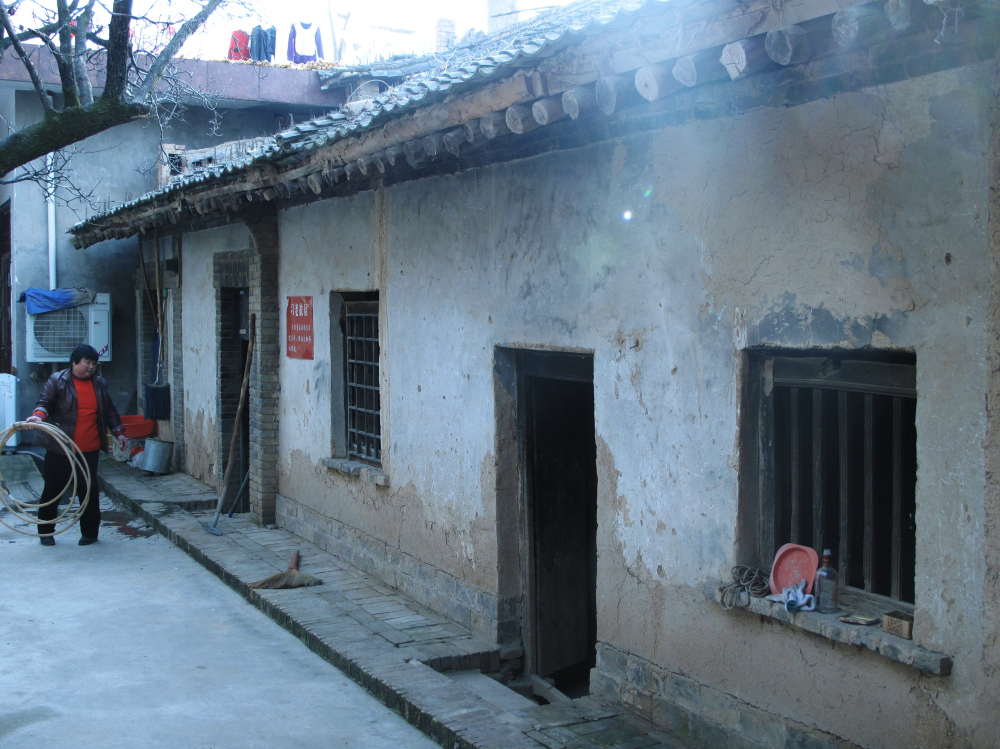 "He called for family unity among the cousins. He told them to act according to national rules, and not to cause trouble," she says.

For much of his life, Xi's fame has been overshadowed by his second wife, Peng Liyuan, who is a major-general in the army and a very popular singer. For Xi's part, on graduating from Tsinghua University in Beijing, his first job was as secretary to Geng Biao, a powerful military bureaucrat and then defense minister.

After that, most of Xi's career has been far from the center, in the rich, eastern coastal provinces of Fujian and Zhejiang and the city of Shanghai. He is seen as being business-friendly and having a no-nonsense attitude unusual among Chinese officials. Li Shih-wei, chairman of Ten Fu tea company and head of a Taiwanese investment association, describes their meetings in the 1990s.

"When he held meetings with us Taiwanese businessmen, he made sure the heads of the relevant government departments were present," Li recalls. "If we raised a problem, he'd ensure it was resolved then and there. He works very efficiently and in a very straightforward way."

Wang Jing, a businesswoman and chief executive of the Newland computer group, is another old friend. In 1993, she considered leaving Fuzhou, the provincial capital of Fujian, because of the bureaucratic difficulties in starting a business there. At the time, Xi was party secretary in Fuzhou, and Wang changed her mind after getting his help.

"He put much effort into supporting high-tech businesses," she says, describing him as being consistently ahead of the curve in his concerns. "Now the government is concerned about food safety. But back then, in Fujian, they were already looking at it. Another interest was building an ecological, environmentally friendly city."

Hsuan describes Xi's voracious appetite for knowledge, saying the mainland Chinese politician has read widely about Taiwan's economic development and its democratization. He says Xi met a wide circle of Taiwanese in Fujian, including members of the opposition Democratic Progressive Party, which favors formal independence from Beijing.

In 1994, while on an official trip to Germany, Hsuan accompanied Xi on a stopover in Amsterdam. Hsuan says Holland's liberal policies toward drugs and prostitution fascinated Xi.

"I remember he asked so many questions, and I thought, 'Wow, he doesn't look like a communist,' " Hsuan says. "He was amazed at why the Dutch government has opened up this, but have pretty good control. He may not think it's a good idea to have this kind of thing in China, but he likes to learn." 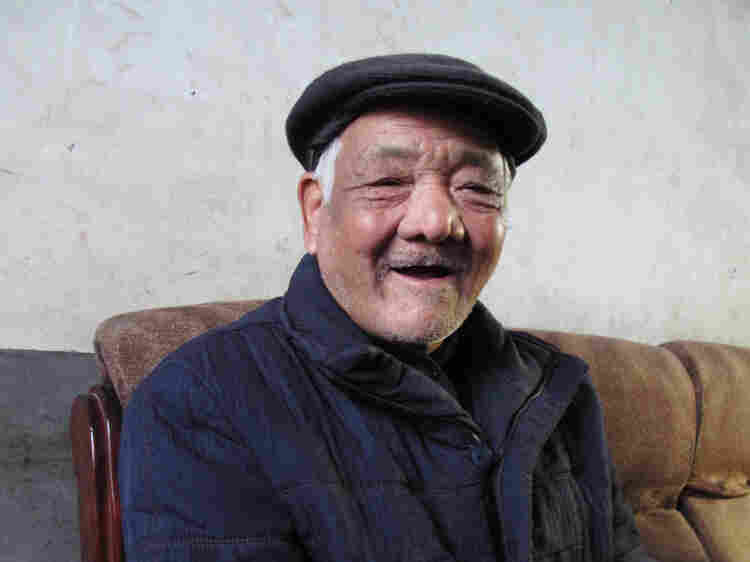 Xi Zhongfa, 81, is the uncle of Xi Jinping, the man who is almost certainly China's next president, but the elder Xi's living conditions are very basic, with no hot water inside his house and little heating. Louisa Lim/NPR hide caption 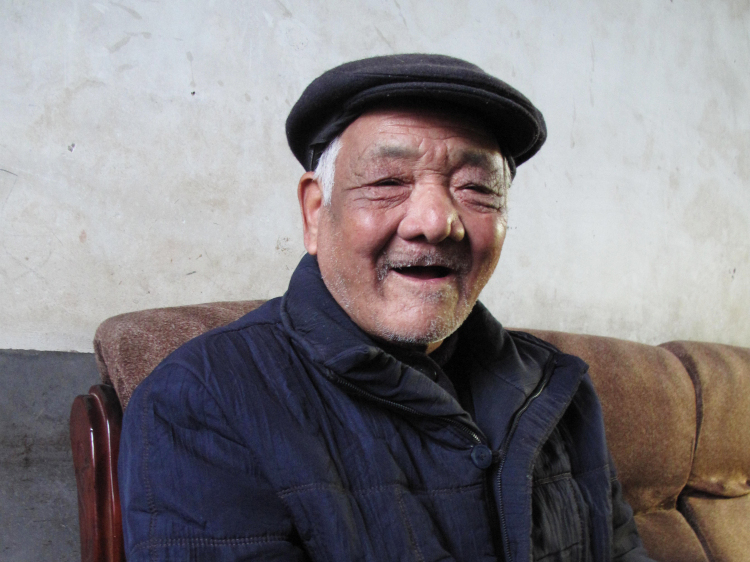 Xi Zhongfa, 81, is the uncle of Xi Jinping, the man who is almost certainly China's next president, but the elder Xi's living conditions are very basic, with no hot water inside his house and little heating.

Hsuan says Xi has always shunned ostentation, preferring to eat simple food like dumplings or noodles with minced pork. The pair used to play tennis together, but normally played at what Hsuan says was "a very average" court at a local school, rather than the more rarefied surroundings inside the government guesthouse.

Xi has twice been sent in to clean up after major corruption scandals. Sources say his daughter, who studies at Harvard under an assumed name, leads a low-key existence, unlike some of the flashier offspring of princelings, who have made headlines with their champagne-swilling, high-society lifestyles.

Friends describe Xi as genial and loyal, willing to travel out of the way to catch up with old companions. According to Hsuan, Xi has a "very strong" sense of humor.

As an example, he describes an incident in 1992, when the pair tried to visit Pearl Harbor, in Hawaii, during a tropical storm. Unwittingly they strayed onto the grounds of a military base, and were stopped by guards and asked to leave. On leaving, Hsuan says Xi joked, "Well, Jason, we have successfully occupied Pearl Harbor without any sacrifice of soldiers."

But that humor has not been on public display. Xi Jinping's most well-known public statement, and one indication of a more acerbic side to his personality, emerged on a tour of Mexico three years ago. Then, he criticized what he called "some foreigners with full bellies and nothing better to do than engage in finger-pointing."

Nationalists at home went wild; others feared the comment was not statesmanlike.

Now, the stakes are higher. Faced with a political transition complicated by factional infighting, Xi needs a successful U.S. trip to burnish his credentials overseas and build political capital at home.