Accessibility links
Study: 1.8 Million Dead People Still Registered To Vote A new report finds that about one in eight U.S. voter registrations are invalid or inaccurate. While there are few documented cases of voter fraud, the study finds that cooperation among states could improve the accuracy of voter registration lists nationwide. 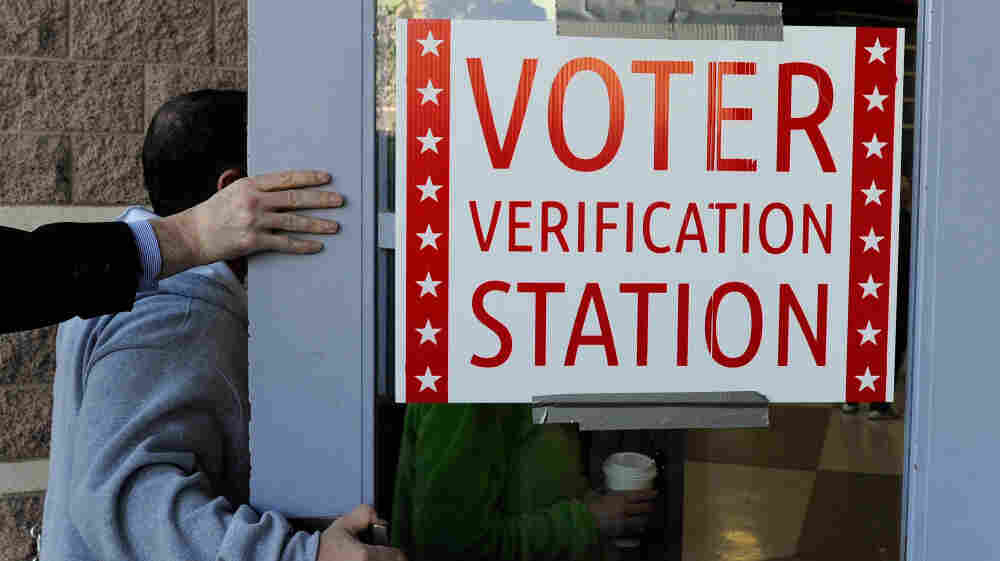 Democrats and Republicans don't agree on much. But they do agree that voter registration lists across the country are a mess.

A new report by the Pew Center on the States finds that more than 1.8 million dead people are currently registered to vote. And 24 million registrations are either invalid or inaccurate.

There's little evidence that this has led to widespread voter fraud, but it has raised concerns that the system is vulnerable.

Election officials say one problem is that Americans move around a lot. And when they do, they seldom alert the local election office that they've left.

Ben Skupien, a registered voter who now lives in Northern Virginia, is pretty typical. He has moved repeatedly over the years and says he's probably registered to vote in about a half-dozen states.

"The assumption, I would think, is that they would do the courtesy of letting the other states know that if you're registered with a new state, [the old registration] would no longer apply," said Skupien.

In fact, states seldom share such information. The Pew study found that almost 3 million people are registered to vote in more than one state.

"If a John Smith lives in Maryland and goes to another state, say on vacation, and dies," Lamone said, "the law of the state where John Smith dies dictates whether or not the Maryland vital statistics people can share that information with me."

And even when they do — or if a person dies in-state — there's often a delay before election officials are alerted. It's also not always clear that the individual on the death certificate is the same one who's registered to vote. Election officials still have to do a lot more digging to avoid accidentally taking someone off the rolls who is very much alive.

Washington Secretary of State Sam Reed says it's amazing how many times his state has come across names on the voter rolls that appear to be the same person, but turn out not to be.

"We've even had cases, in very small counties, people [with the] same name and same birth dates," added Reed.

He said that has led to inaccurate reports that "dead" people are voting. He admits there have been a few cases in his state where widows or widowers have cast ballots for former spouses, but he said such fraud is very rare.

Still, election officials say it's important that the public have confidence in the system.

So Washington and seven other states — Oregon, Colorado, Delaware, Maryland, Virginia, Utah and Nevada — are joining a pilot program to share more voter information and other databases, to try to make their lists more accurate.

David Becker, director of election initiatives at Pew, which organized the project, said he hopes to have the program implemented in time for November's general election.

"What this system will do is it will take in data from the states who choose to participate, specifically motor vehicles data and voter registration data, and it will be matched, along with some data that many states use already, like national change of address data from the Postal Service," said Becker.

The data will be matched with other government databases as well, such as death records from the Social Security Administration.

Becker thinks that should help states weed out duplicates and mistakes more quickly and accurately. He said the program will also allow states to identify some of the more than 50 million Americans who are eligible to vote but aren't registered.

It all sounds great to Lillie Coney of the Electronic Privacy Information Center, a research group in Washington, D.C. But she and other privacy advocates say they'll be watching closely to make sure all this new data-sharing actually leads to more accurate voter rolls.

"We do know that there are a lot of people who want to believe that that in fact will be the case, but we want to see the numbers," said Coney.

Coney recalled another data-matching program in Florida where legitimate voters were confused with convicted felons and mistakenly removed from the rolls.

Becker said no one's name will be deleted automatically. Officials are required by law to try to contact the voter first.