Accessibility links
The Nation: The Romantic-Industrial Complex The economics of love is serious business. Samhita Mukhopadhyay of The Nation relates how Valentine's Day has been overcome by commercial interests and argues that people should break the mold of heteronormative expectations.

The Nation: The Romantic-Industrial Complex

The Nation: The Romantic-Industrial Complex 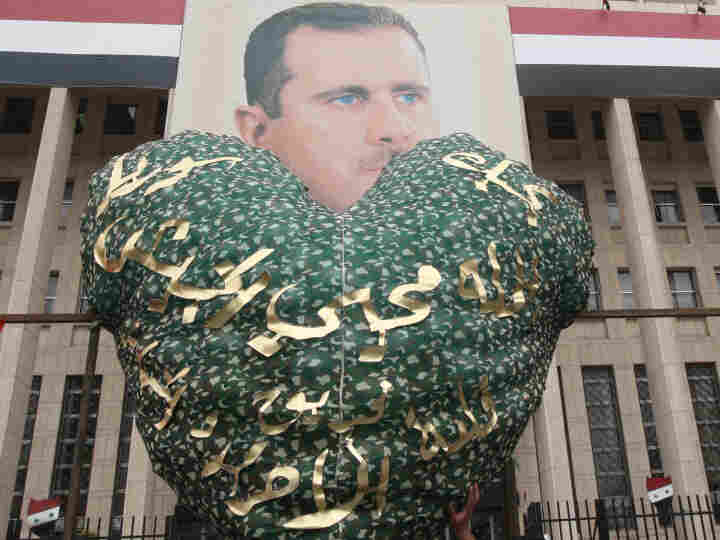 Syrian demonstrators hold up a balloon for Valentine's Day in front of a portrait of President Assad, during a rally to show their support for their leader Damascus on Feb. 14, 2012. In the U.S., some fear that Valentine's Day has become serious business. Louai Beshara/AFP/Getty Images hide caption 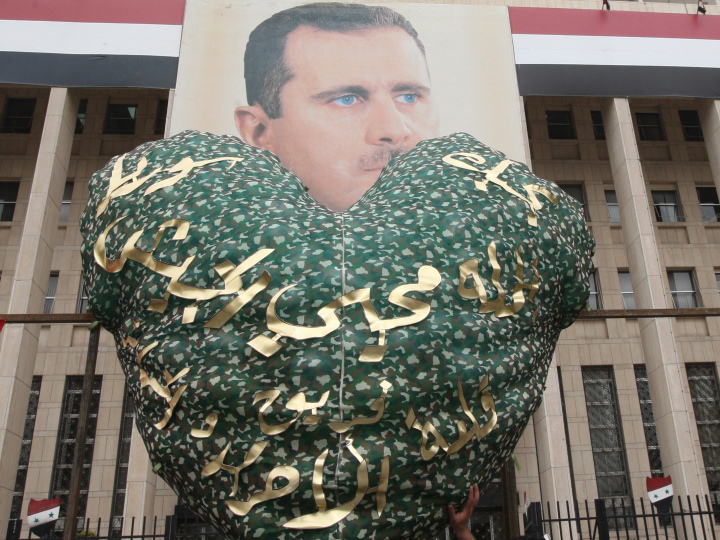 Syrian demonstrators hold up a balloon for Valentine's Day in front of a portrait of President Assad, during a rally to show their support for their leader Damascus on Feb. 14, 2012. In the U.S., some fear that Valentine's Day has become serious business.

Samhita Mukhopadhyay is the Executive Editor of Feministing.com and the author of Outdated: Why Dating is Ruining Your Love Life.

This Valentine's Day, enthusiasts are expected to spend approximately $17.6 billion on romance-related goods — jewelry, cards, flowers and chocolates — a ten-year high, according to the National Retail Federation. That's not even the whole picture, when you include all the other things that go along with the "perfect" romantic experience: heart shaped doohickeys, sexy lingerie, bikini waxes, fancy dinners, candle lit romantic massages for two, romantic getaways, puppies and couples counseling. Clearly, the economics of love is serious business.

But despite evidence of how much love costs these days and cultural norms that are evolving away from traditional gender roles in romantic relationships, the commercialization of Valentine's Day continues to communicate traditional and conventional fantasies about gender and love. It's what theorists call heteronormativity: the structures and norms that privilege heterosexual monogamy, while simultaneously stigmatizing behavior that deviates from this model. How is it that heteronormativity still has such a stronghold on the public imagination, despite the fact that more and more people are choosing to delay or forgo marriage or despite the fact in more and more states across the country, marriage is no longer limited to people who are straight? How has it still intact after the Kim Kardashian marital disaster saga, or the notorious marital flameouts between Kevin Federline and Britney Spears or Katy Perry and Russell Brand? How has it weathered scandal after scandal in which the most ardent supporters of "marriage between a man and a woman" are unable to stay faithful?

Well, it's the economy, stupid — except you're not stupid. There is a romantic-industrial complex that nets billions of dollars from Valentine's Day and weddings, and it needs you to "buy into" outdated ideas of love and marriage. The more you express your love through candies, chocolates, diamonds, rentals and registries, the more the RIC makes! Valentine's Day is only one manifestation of the RIC: Americans spend $70–80 billion on weddings each year. With the average American wedding costing $27,000, marriage itself has become a luxury item. This is more than a struggle between old and new traditions — this is about money.

In fact, trends in marriage rates appear to be falling right in line with whether one can afford a wedding or not. In a recent study, the Brookings Institute found that in the past forty years, the marriage rate of the top 10 percent of female earners has increased or held steady, while dropping by more than 15 percent for the bottom 70 percent. The same study found that "men that experienced the most adverse economic changes also experienced the largest declines in marriage." The least decrease in marriage rates were with the wealthiest 10 percent of male earners, age 30 to 50, but the sharpest decline was with men in the bottom twenty-fifth percentile of earnings, with a decrease from 86 percent in 1970 to 50 percent today. The researchers concluded that the single most significant reason that marriage rates have fallen is the number of men that feel they do not have the resources to marry.

Continued At The Nation