Accessibility links
Iran Can Disrupt Key Waterway, But For How Long? Iran's threats to close the strategic Strait of Hormuz have caused oil markets to gyrate, but few think Iran can really deliver on its threat. Also, Gulf states are reassured by promises of international military assistance. 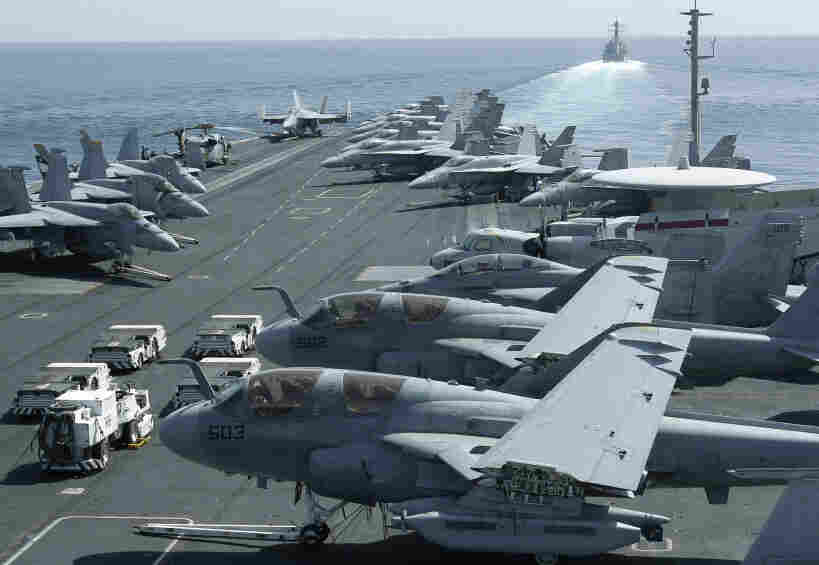 The USS Abraham Lincoln sailed from the Persian Gulf through the Strait of Hormuz on Tuesday. This photo was taken from the bridge of the aircraft carrier and shows U.S. aircraft parked on its flight deck. In the background, a U.S. destroyer patrols. Hassan Ammar/AP hide caption 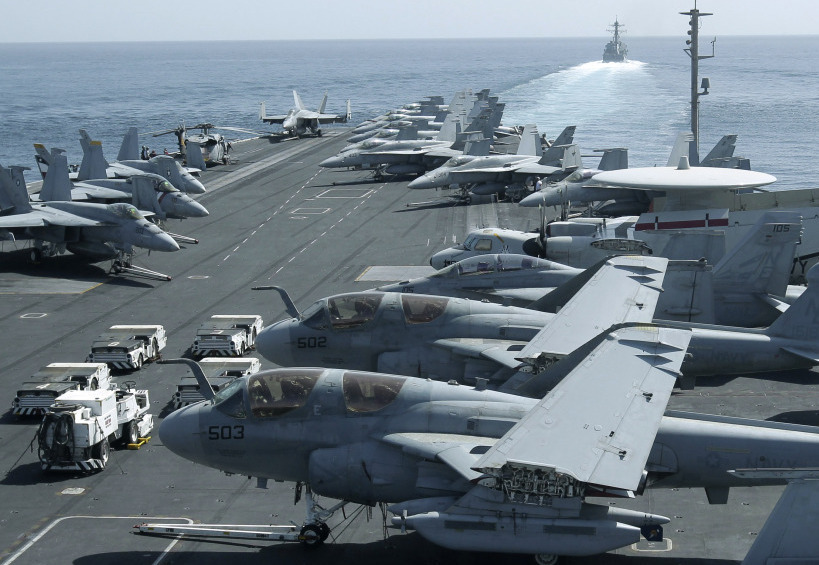 The USS Abraham Lincoln sailed from the Persian Gulf through the Strait of Hormuz on Tuesday. This photo was taken from the bridge of the aircraft carrier and shows U.S. aircraft parked on its flight deck. In the background, a U.S. destroyer patrols.

The dispute over Iran's nuclear program has again rocked oil markets. And Iran is threatening to close the Strait of Hormuz, which is just 34 miles wide yet serves as the passageway for 20 percent of the world's oil.

This is not a new drama. In fact, it was a recurring issue in the 1980s. Still, there's been relatively little activity among Gulf oil producers to find alternative routes to get their oil to market.

The United Arab Emirates is one of the few that has made a serious effort. It has completed construction of a new 230-mile pipeline that bypasses the strait, traveling from Abu Dhabi on the Persian Gulf in the west to Fujairah on the Gulf of Oman in the east.

But local energy reporters say there's less there than meets the eye. Technical problems have delayed use of the line by several months. And even when fully operational, the pipeline won't even cover Abu Dhabi's daily production, let alone anyone else's.

Mirza says of the major Gulf oil producers, only the UAE and Saudi Arabia have pipeline alternatives to shipping oil through the Strait of Hormuz. Mirza says by converting a petroleum products pipeline to carry crude across the desert, the Saudis could make up a fraction of their current production should traffic in the strait be disrupted.

"Saudi Arabia ... has a production capacity of 12.5 million barrels a day. They can only transport a maximum of 5 million barrels a day from the east coast to the Gulf of Suez," Mirza explains. "Other countries, such as Qatar and Kuwait, would be entirely blocked out, as would Iraq. If you take into account the whole of the Gulf, it would knock out possibly two-thirds of export capacity."

So why have world oil markets, despite some jittery moments, remained relatively calm about the worst-case scenario for the Strait of Hormuz? 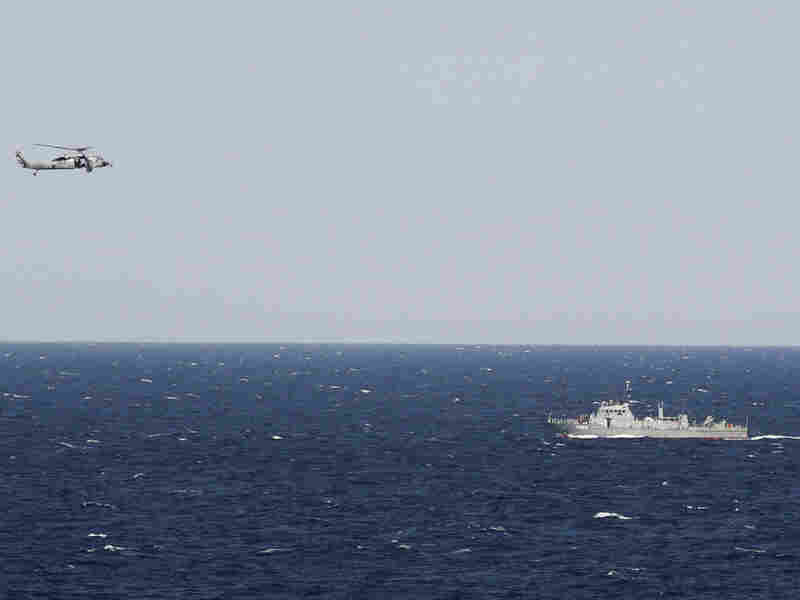 A helicopter from the aircraft carrier USS Abraham Lincoln hovers over an Iranian patrol ship during a transit through the Strait of Hormuz on Tuesday. Jumana El Heloueh/Reuters/Landov hide caption 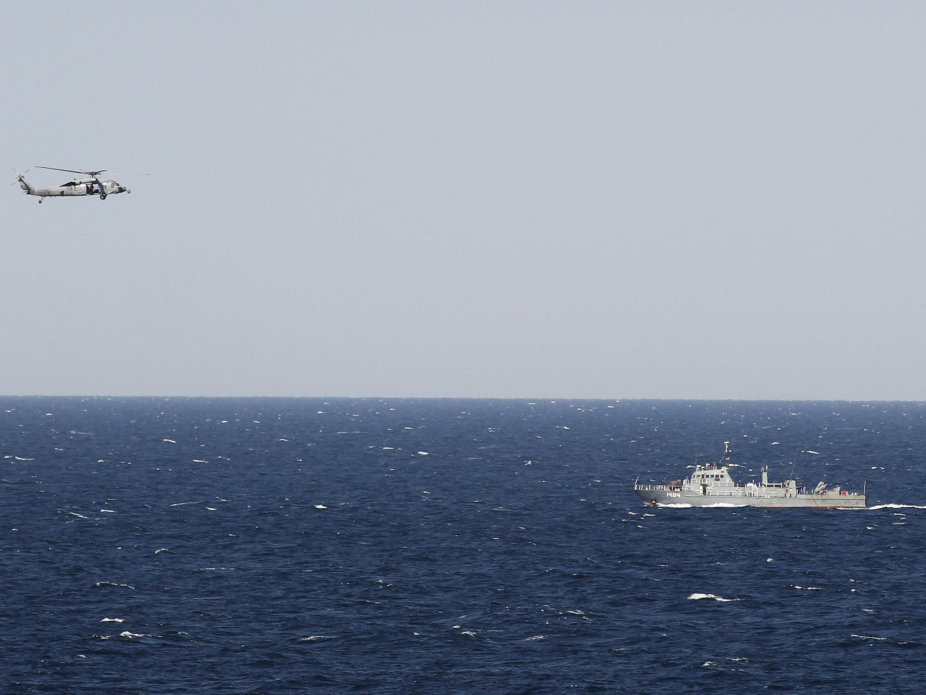 A helicopter from the aircraft carrier USS Abraham Lincoln hovers over an Iranian patrol ship during a transit through the Strait of Hormuz on Tuesday.

Mustafa Alani of the Geneva-based Gulf Research Center says there are several factors weighing against Iran's ability to close the strait. Hormuz is classified as an international waterway by the United Nations, meaning international military action to keep it open would not only be permitted but is expected.

The shipping channels are actually on the Omani side of the strait, not the Iranian side, and as a practical matter, Alani says Iran has already demonstrated during the Iran-Iraq War in the 1980s that it couldn't keep the strait closed.

For eight years, he says, the Iranians tried to close Hormuz. They used all the means at their disposal, utilizing their air force and navy, and including strategies such as mining and speed boats.

"[They] tried to close Hormuz and to prevent the transport of oil. They failed," Alani says.

U.S. and European military officials have also said they don't believe Iran can close the strait for any length of time. Some analysts, however, say a temporary closure may be possible.

Theodore Karasik with the Institute for Near East and Gulf Military Analysis in Dubai estimates that the strait could be closed for 10 to 15 days, maximum.

Despite what he calls a "robust" international military presence near the strait, Iran could cause problems with asymmetrical attacks.

But he agrees with other analysts that Iran could not keep the strait closed. Meanwhile, Iran's Revolutionary Guard is scheduling more naval exercises in the strait later this month.