Accessibility links
Egyptians Harbor Suspicions About U.S. Aid Groups Egyptians may be dissatisfied with their ruling generals, but they generally support the move to prosecute American and other pro-democracy groups for allegedly operating illegally and fomenting unrest. Even those who have benefited from the foreign groups are hesitant to speak out. 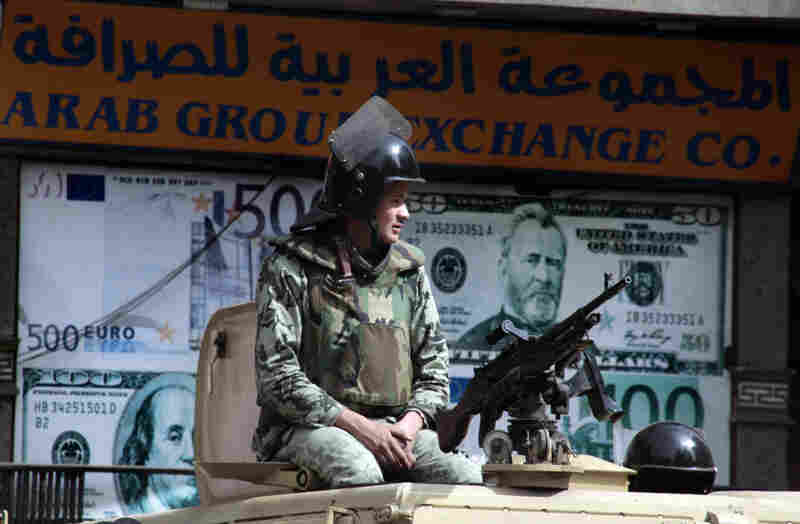 An Egyptian soldier on an armored vehicle guards an exchange office in Cairo on Monday. Tensions between the U.S. and Egypt are rising over Cairo's investigation of aid workers, many of them American. An Egyptian Cabinet minister, Faiza Aboul Naga, recently accused the U.S. of directly funding pro-democracy groups in order to create chaos in Egypt. Amr Nabil/AP hide caption 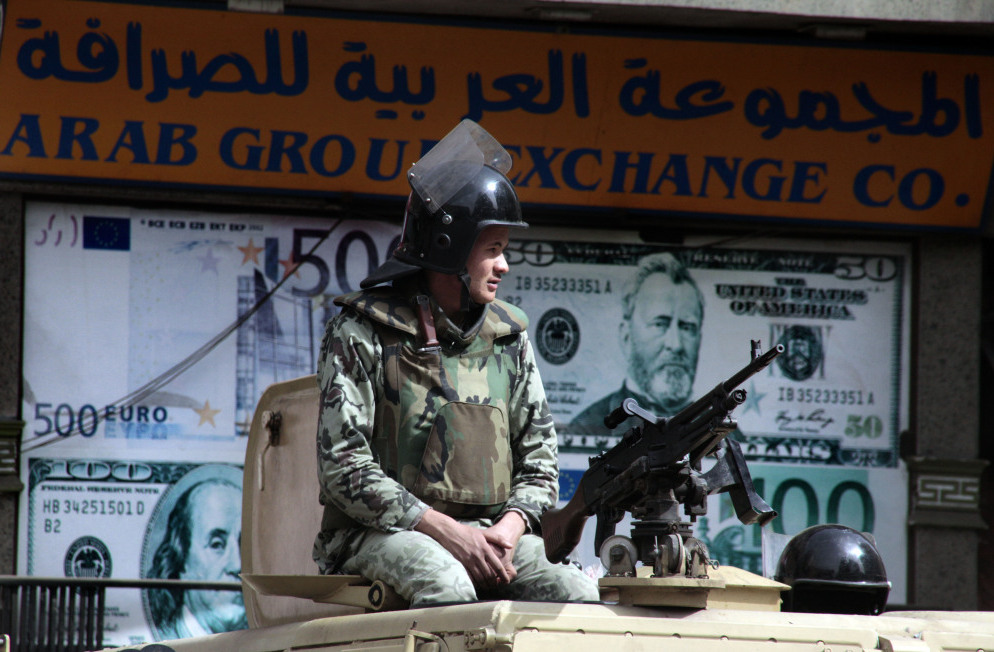 An Egyptian soldier on an armored vehicle guards an exchange office in Cairo on Monday. Tensions between the U.S. and Egypt are rising over Cairo's investigation of aid workers, many of them American. An Egyptian Cabinet minister, Faiza Aboul Naga, recently accused the U.S. of directly funding pro-democracy groups in order to create chaos in Egypt.

The Egyptian government has further escalated tensions with Washington by accusing U.S. officials of directly funding nonprofit groups to create chaos in the Arab country.

The latest comments were made by an Egyptian Cabinet member to prosecutors conducting a criminal probe into the activities of 43 aid workers, many of them American.

Such claims anger U.S. officials, who have threatened to hold back more than $1 billion in military aid if the crackdown on private, pro-democracy organizations doesn't end.

We have no experience in democracy. We are going to have to learn from someone. I would rather learn from the Americans than the Saudi Arabians, frankly.

Yet the comments are forging a rare bond between the ruling generals and the Egyptian people, who have long been suspicious of American actions.

Stories about how America is trying to undermine Egypt are rife in the country's newspapers and on TV.

On a talk show on independent ONTV recently, for example, guests debated whether U.S. funding for their country comes with a sinister agenda.

And a recent cartoon in the state-controlled Al-Akhbar newspaper depicted a scowling Uncle Sam aiming a small pistol labeled "U.S. aid" at an Egyptian official with a much larger cannon representing national dignity.

Official media outlets are even more aggressive about stoking the xenophobia generated by the criminal probe into U.S.-funded pro-democracy groups in Egypt.

State TV repeatedly aired comments by investigators who more or less accused the American NGO workers of being spies with maps showing how the U.S. planned to carve up Egypt.

The maps one judge held up for the cameras actually showed voting districts and election dates.

Still, the Egyptian public — which has long been at odds with its interim government — has largely embraced the steady stream of allegations.

Many Egyptians approve of the crackdown on American NGOs. They view them as an extension of the U.S. government that for decades backed former President Hosni Mubarak's regime.

That some of the NGO employees — including the son of U.S. Secretary of Transportation Ray LaHood — sought shelter at the U.S. Embassy bolstered Egyptian suspicions that they have something to hide.

"The U.S. is such an easy and obvious target," says Nora Soliman, a spokeswoman for Egypt's Justice Party.

"Partly that's the fault of the Egyptian government for never wanting to give the U.S. and the U.S. aid programs credit," she says. "Partly it's USAID's fault for not going out and articulating the type of support they've provided Egypt over the years. And so they are shrouded in mystery."

Soliman is one of several Egyptians who have been very vocal in their defense of the NGOs. Candidates from her party were trained by the U.S. National Democratic Institute on how to run campaigns.

"Now granted, there were some people who were uncomfortable with some Americans coming to the party day in and day out, and doing all this training," Soliman says. "But they all recognized at the same time that this was something that we needed. We have no experience in democracy. We are going to have to learn from someone. I would rather learn from the Americans than the Saudi Arabians, frankly."

No Choice But A Trial

But other people the NGOs helped train — and there were many thousands — have been more reluctant to speak out. Some are afraid of being arrested. Others, like members of the ultraconservative Islamist Nour Party, don't see it as politically prudent.

Nour President Emad Abdel Ghaffour claims the people from his party who sought training from the Americans did so unofficially, adding that the criminal probe will ensure transparency and educate Egyptians on the role these groups play.

He also asks whether the U.S. government would act any differently if Egyptian groups were operating in the U.S.

Soliman of the Justice Party says she fears that with the public spectacle the Egyptian government created, it will have no choice but to put the Americans and others who are charged on trial.

"They may need to come out the other end having proved that they did not commit any crimes other than operating without a registration, which the government has allowed them to do for the past six years. But it won't be something that will just go away overnight," she says.

Official Egyptian media say a date for the trial will be announced this week.