Accessibility links
Movie Review - 'The Secret World of Arrietty' In a Borrowers adaptation from Japanese animators Studio Ghibli, a spirited, inches-tall girl and her family negotiate the hurdles and hazards of the oversized human world. Critic Bob Mondello says in an age of hyperactive kid flicks, this gentle, imaginative and visually lush film deserves a look. 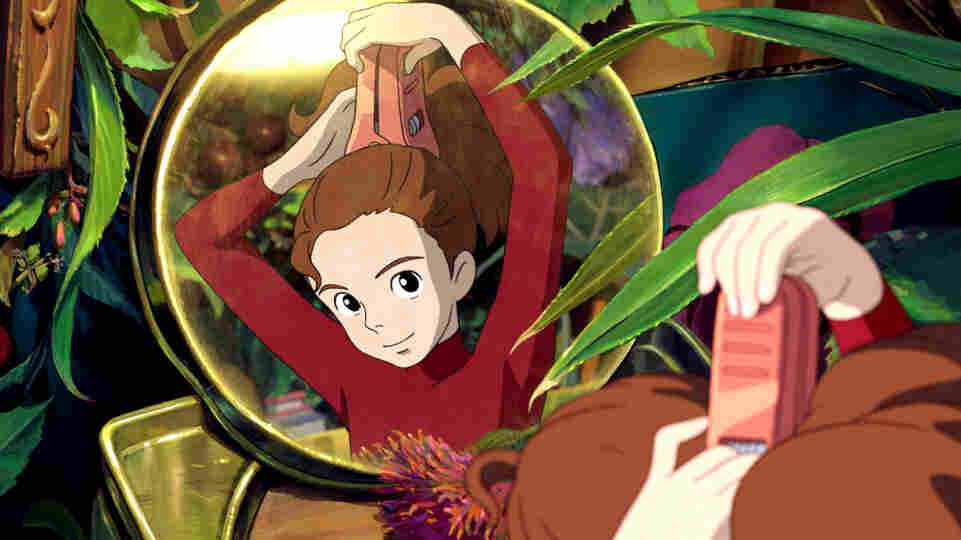 Small Wonder: Arrietty (voiced by Bridgit Mendler) is an inches-tall Borrower whose family lives within the walls of a human household. Walt Disney Pictures hide caption

The Secret World
of Arrietty

From 'The Secret World of Arrietty' - 'New Bean'

From 'The Secret World of Arrietty' - 'First Borrow'

From 'The Secret World of Arrietty' - 'Dreaming'

In a hyperactive kid-flick universe populated by kickboxing pandas, rampaging chipmunks and tap-dancing penguins, The Secret World of Arrietty — the tale of a girl who's barely 4 inches tall and possesses neither superpowers nor a toymaker's imprimatur — is almost startlingly delicate and calm.

Calm, let's note, despite the presence of a marauding house cat, a raven who'd love to make a quick snack of our heroine, and a housekeeper determined to root out the little people who live beneath her floorboards. Delicate, however, comes with the territory.

That's because Arrietty is the latest animated opus from Studio Ghibli, the Japanese animation house co-founded by the great auteur Hayao Miyazaki, director of such international animated smashes as the eco-friendly Princess Mononoke, the values-oriented Spirited Away and Howl's Moving Castle, which preceded Pixar's Up with its manse-on-the-move storyline.

Miyazaki was only peripherally involved in Arrietty, but director Hiromasa Yonebayashi appears to be a devoted disciple, domesticating the master's teeming visual style somewhat but maintaining his emphasis on intricate graphics, strong independent female characters and stories rooted in real-world concerns.

Arrietty's story, taken from the first book in Mary Norton's children's series The Borrowers, centers on the tiny Clock family — 14-year-old Arrietty Clock and her parents — who live in the walls of a house where a boy with a heart condition is resting up for an operation. Shawn (voiced by David Henrie) spots the diminutive Arrietty (Bridgit Mendler) when she and her father (Will Arnett) are foraging for food. A pea being enough to feed the whole family, they should be able to do this unnoticed, but when Arrietty drops a sugar cube, she's discovered. Shawn is lonely and wants to make friends, the elder Clocks are as terrified as their daughter is curious, and therein hangs the tale.

While there's not much in the way of incident — just the cat, the crow, the housekeeper (voiced by Carol Burnett) and Shawn's illness — the animators slip quite a bit of socially conscious content into a narrative that's chiefly about the ingenious ways the Clock family gets around in what is for them a wildly oversized landscape. The characters deal with friendship across cultural divides, the clever recycling of resources, frank talk of illness and the finality of death — and, when the Clock family realizes they need to move on, a shorthand look at the plight of refugees.

All of this while clambering from nail to nail and down staple-staircases inside the walls of the house, rappelling off a kitchen counter, and careening through a garden where even a close-cropped lawn amounts to an obstacle course. The filmmakers' approach is gentle and slightly humor-challenged, perhaps because they've invested so much imagination in capturing the world from brave little Arrietty's perspective — divining the texture of a raindrop, say (thick and viscous), when it's nearly the size of your fist and must pour from a dollhouse-sized teapot spout. Or the sound made by a straight pin (the clang of a sword) when it's drawn from the folds of Arrietty's tunic.

Whether the sophistication of Ghibli's conceptual work will prove attractive to American kids who've grown used to the more frantic, hard-edged world of computer animation is an open question. Disney has distributed Ghibli's last few pictures in the U.S. to steadily increasing though still modest box office. Internationally, though, the films gross in the hundreds of millions of dollars, appreciated worldwide for their lushly realized visuals and thought-provoking narratives. The Secret World of Arrietty may be too gentle and meditative to be the studio's breakout hit in this country, but it's another sweet advance, and further evidence that the Ghibli secret must soon out.