Accessibility links
For China's Likely Premier, A Western Influence Li Keqiang, who is in line to become China's next premier, has a very different resume than other Chinese leaders. He speaks English well, translated a book by a prominent British judge, and mingled with activist students when he attended Peking University three decades ago. 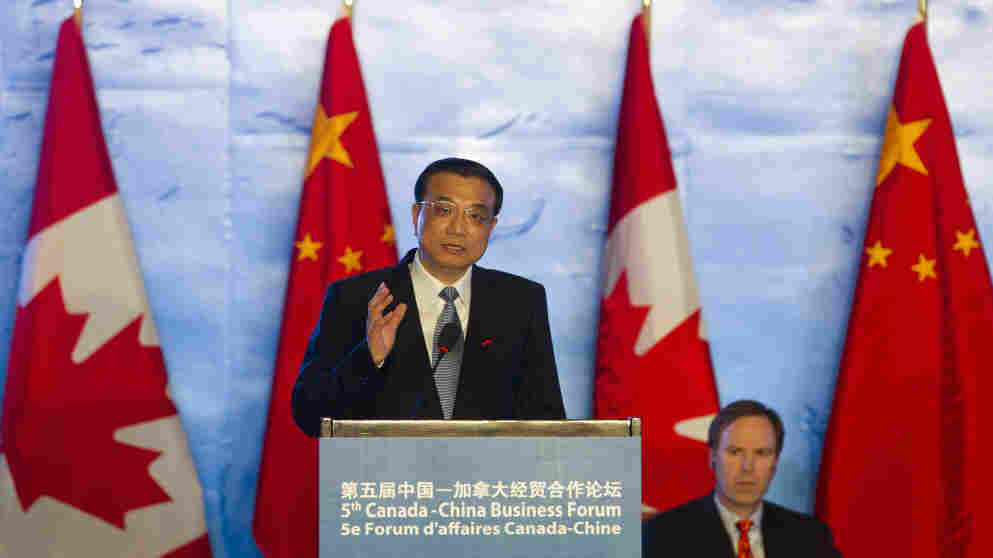 Chinese Vice Premier Li Keqiang, shown here delivering a speech at a Canada-China business forum in Beijing, on Feb. 9, 2012, is expected to become the country's next premier. In contrast to most other Chinese leaders, Li speaks English and has had considerable exposure to Western ideas. Diego Azubel/AP hide caption 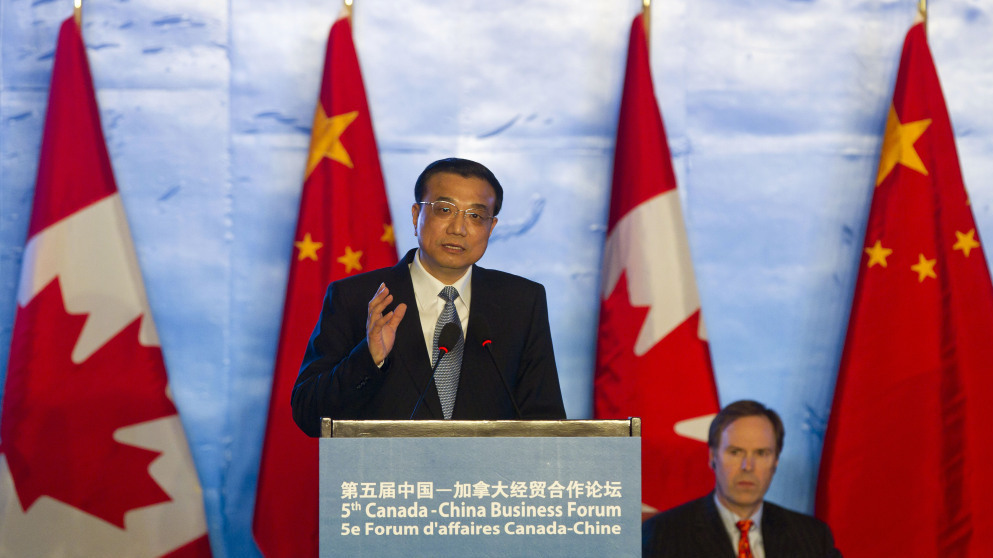 Chinese Vice Premier Li Keqiang, shown here delivering a speech at a Canada-China business forum in Beijing, on Feb. 9, 2012, is expected to become the country's next premier. In contrast to most other Chinese leaders, Li speaks English and has had considerable exposure to Western ideas.

The man who's expected to become China's president next year, Xi Jinping, is considered a princeling, the son of a prominent Chinese political figure. But the man who's likely to become premier, Li Keqiang, comes from very different stock.

The son of a minor party official, Li worked as a farmer for four years, before studying law at university.

And it's this education that makes him stand out from China's past leaders. Li entered Peking University in 1978, when it was a hotbed of student activism. He studied law. He even translated a book on due process by Lord Denning, the famous British judge.

The Western influence in his education has had an impact, according to Yang Baikui, who translated the book with Li.

"He definitely thought the book had value. I thought he was very capable. My first impression is that he was quite open-minded and tolerant. He was quite a realist, rather pragmatic. He wasn't very idealistic," Yang says with a laugh.

That was a time of intense intellectual and political ferment, with Peking University students holding competitive elections. Li Keqiang didn't stand for election, but he was appointed as president of the Student Federation.

[Li] didn't drink alcohol or go out singing or anything like that, because his aim was the very top. He wanted to be a politician. And politicians in China have no friends, because friends drag them down.

Yang Baikui, who translated a book with Li Keqiang, the man expected to be China's next premier

So he spent time with the most politically active students, including some who subsequently ended up in jail for their part in the 1989 Tiananmen Square protests. He even knew Chen Ziming, who was named the "black hand" behind the protests and sentenced to 13 years in jail.

"Then, Li Keqiang was a very idealistic, very ambitious person with wide knowledge. Has 30 years in the system eroded his spirit? I believe what you learn when you're young influences your whole life," Chen says.

It's a sign of how little Li gave away — even at that stage — that his fellow students can't agree on whether or not he was idealistic.

It's also a sign of his political ability that he could rise so high after being so closely linked with some of those at the very heart of the Tiananmen protests.

Yang, his co-translator, spent a year in detention. But Yang says he didn't count Li as a friend. In fact, he believes Li Keqiang didn't have any close friends.

"He didn't drink alcohol or go out singing or anything like that, because his aim was the very top. He wanted to be a politician. And politicians in China have no friends, because friends drag them down," Yang says.

A Crisis As Governor

Unlike his predecessors, Li speaks English well. After getting a doctorate in economics, he rose through the ranks of the Communist Party's Youth League, a training ground for reformist-leaning officials.

Then, in 1998, at age 43, he became the youngest governor in China, in Henan province. It's this spell in his career that has led to criticism.

Chen Bingzhong, a 79-year-old Communist Party member and the former head of China's National Institute of Health Education, has written three open letters detailing why he thinks Li is not fit to be China's next premier.

"His sense of values runs counter to the code of ethics followed by contemporary society," Chen says. "This kind of person is not suitable to be the leader of a country."

Before and during the time that Chen was governor of Henan, state-run blood banks infected tens of thousands of blood sellers with the HIV virus. Most of the infections happened before Li arrived. But Chen says Li was complicit in the cover-up.

"He hid the facts. He attacked the whistle-blowers. He did some work for sufferers, but not nearly enough. And he continued with the cover-up. That was very wrong," Chen says.

Yet this clearly did not hold Li Keqiang back. Nowadays as vice premier, he has a reputation for caring about social equity and closing the wealth gap. He also has an apparent skepticism of communist bureaucracy.

A WikiLeaks cable describes him telling the then-U.S. ambassador that Chinese economic figures are "man-made" and "for reference only." But despite his early flirtation with student radicals, it's telling that nobody who knows him really knows what Li Keqiang stands for, apart from his ambition to hold power.