Accessibility links
Syrian Activists Live Stream Their Revolution The Syrian government is now nearly two weeks into its bombardment of the city of Homs. The U.N. says at least 300 civilians have been killed. The offensive might have gone unreported had it not been for the activists and citizen journalists who are risking their lives to tell the stories. 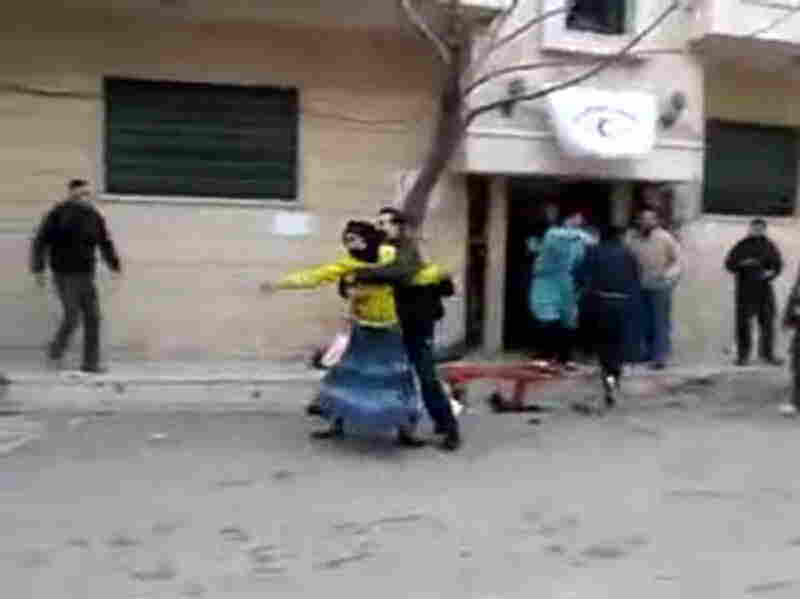 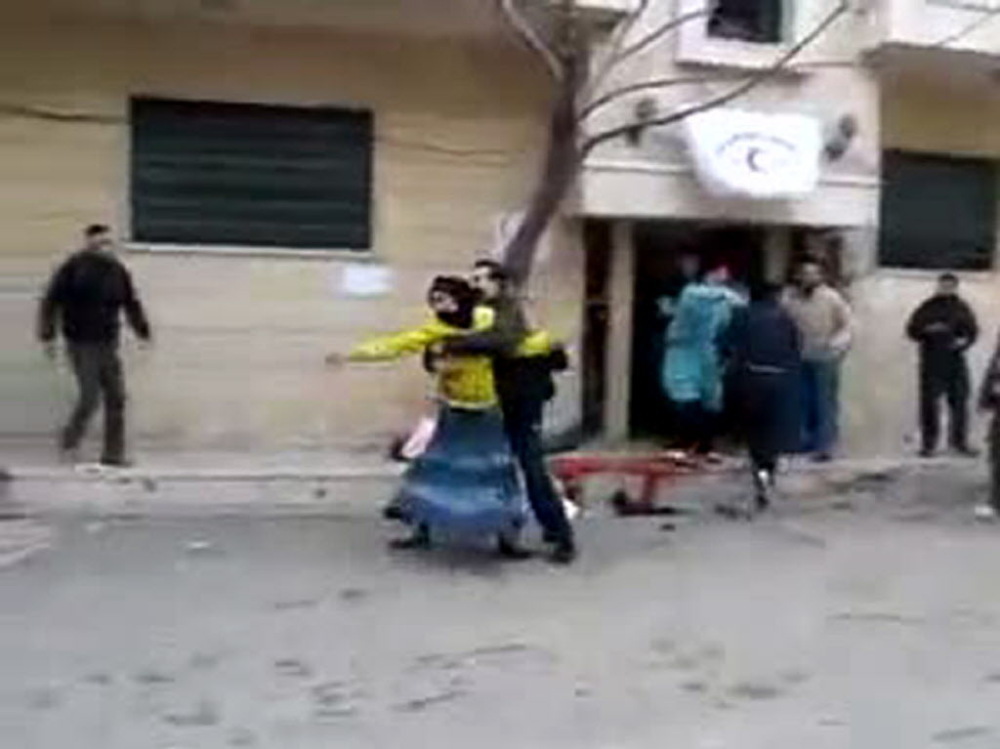 Activists say this image, taken from a video uploaded to YouTube, shows Syrians outside a field hospital in Homs last week.

Syrian troops have fired rockets and mortars at neighborhoods in the city of Homs that have most fiercely resisted the government throughout the uprising.

Mainstream journalists are barred from entering Homs, so a team of activists decided to record the offensive themselves. The activists positioned their cameras atop buildings in the city. Each morning the view is blue sky, a minaret, a sea of rooftops. Then come the booms.

The offensive is mainly centered on the neighborhood of Baba Amr, which has seen an increasing resistance by civilians who have taken up arms and soldiers who have defected from the army.

Day in and day out, the video stream is up and running, recording the government offensive in real time. Then, last Thursday, a rocket hit the house where the activists were stationed.

The screen goes gray with smoke, but the camera keeps rolling. The picture of the rooftops eventually comes back into view. Activists call out to God as they discover the bodies of four women in the basement who were killed by the blast.

Twitter and Skype are a flurry of messages. "Did I just watch someone die?" one activist writes. The rockets keep falling, volunteers help the injured and the camera team hits the streets.

'You Don't Think About Your Safety'

Danny Abdul Dayem is TV-ready with his curly black hair, droopy eyes and flawless English. He records this indignant standup in front of five bloodied children who were injured by a rocket that day.

Dayem has become a regular face in the coverage of the bombardment of Homs. With a Syrian father and a British mother, he's the perfect mix of local and international. His videos have been all over the BBC, CNN and Al Jazeera.

In one video, shot in a field hospital, Dayem walks through gruesome heaps of dead and injured people.

"We're not animals. We're human beings. We're asking for help," he says. "We're asking for your help. They're hitting us with rockets. They've not stopped with these for four hours now. They're gonna kill us all.

"If you don't help us now, they'll kill millions, and no one'll find out about us. Please, someone help us."

That same hospital itself was later hit by a rocket. The team immediately sent out a video of the aftermath.

Dayem recently left Homs and sat down for an interview. Before Syria's uprising, he studied business management. Now he's one of the most wanted men in the country.

"If they catch me, I'll be in pieces," he says. Still, Dayem says he'll go back to Homs soon.

Zeynep Tufekci, who researches the power of social media in the Arab uprisings at the University of North Carolina, says Dayem and the activists' work documenting the violence makes it impossible for the international community to stand by and do nothing. But, she says, it also could make it difficult for the regime to consider any kind of peace agreement.

"This kind of visual imagery of how horrific it all is might make it harder for the regime to negotiate something because they are probably thinking — and not all that incorrectly — that people are not going to forget this," she says.

As for Dayem, he says he hopes that once the Syrian revolution is over, he can just go back to being a regular guy.

"I just want to go back to my life — listening to music, seeing my friends — and forget about all this," he says.

But he acknowledges it might be a long, long time before he gets there — if ever.

Rima Marrouch and Lava Selo contributed to this report.