Accessibility links
Iran Ups The Ante With More Nuclear Moves Tehran has unveiled significant developments on two important components of its nuclear program. Iran also announced it was cutting off oil sales to some European countries, but quickly reversed itself. 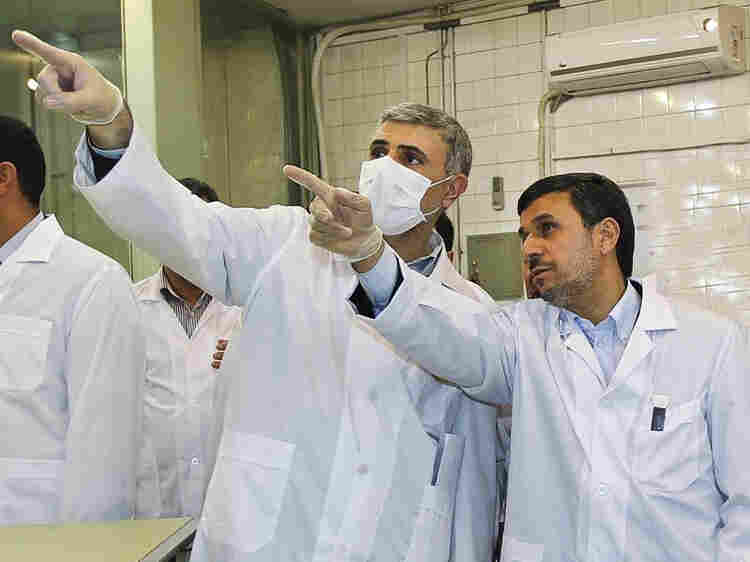 Iranian President Mahmoud Ahmadinejad (right) listens to a nuclear expert during a tour of the Tehran Research Reactor on Wednesday. Iran announced that for the first time it has produced the fuel plates that power that reactor. Iranian Presidency/AFP/Getty Images hide caption 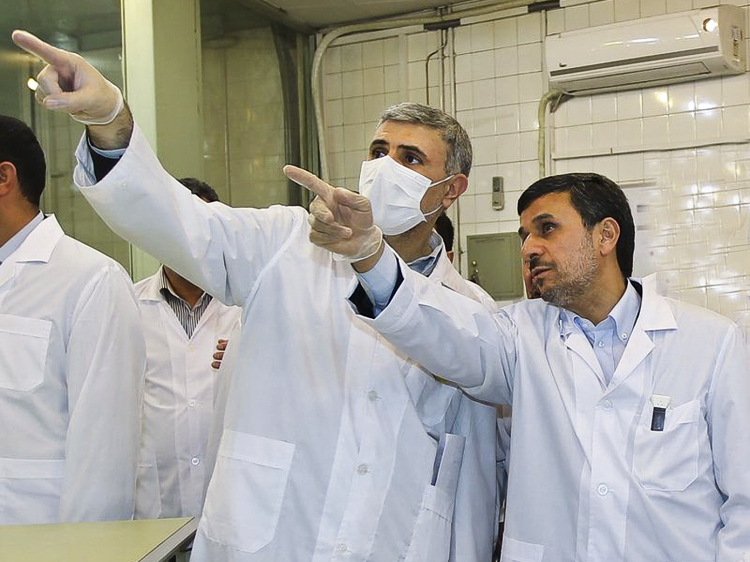 Iranian President Mahmoud Ahmadinejad (right) listens to a nuclear expert during a tour of the Tehran Research Reactor on Wednesday. Iran announced that for the first time it has produced the fuel plates that power that reactor.

Iran has unveiled significant developments on two important components of its nuclear program: the centrifuges used to enrich uranium and the uranium used to fuel a research reactor.

The country has made no secret of its work in these areas. But the news on Wednesday suggests that Iran may be making progress in its nuclear program.

Iran also announced that it is cutting off oil sales to several European nations, only to reverse itself hours later.

One of the developments involves a small nuclear reactor in Tehran — the Tehran Research Reactor — which was supplied to Iran in 1967 by the United States. It mainly produces nuclear isotopes used to treat cancer.

But it's been running out of fuel made from low-enriched uranium.

On Wednesday, Iran announced that for the first time it had produced the fuel plates that power that reactor. The news was expected, says David Albright, head of the Institute for Science and International Security in Washington.

"It's not a surprise that Iran can make a fuel element for the Tehran Research Reactor. It's been working on it for a couple years," he says.

But Iran did trumpet the development, as it's done numerous times in the past when it's claimed to have reached new levels of nuclear expertise. Often its claims have been premature.

Iranian television showed President Mahmoud Ahmadinejad visiting the reactor. He used the occasion to dismiss once again the concerns of the U.S. and other nations that Iran is pursuing nuclear weapons.

They are always saying it's about an atom bomb, Ahmadinejad said, and it's always those nations that already have the atom bomb.

At the same time, Iran announced it installed new, more advanced centrifuges in its enrichment facility at Natanz. These centrifuges, if they operate properly, can enrich uranium much faster than the older models Iran has relied on previously. But there are questions about them as well, says Albright.

"The surprise has been that they didn't start enriching earlier. And there's been speculation that there's been some problems in those centrifuges," he says.

Both the reactor in Tehran and the enrichment facility at Natanz are due for inspections by the International Atomic Energy Agency, and there should be a new IAEA report on these developments by the end of February.

The Iranian media also announced Wednesday that Iran would cut off oil sales to six European nations, including France and Italy, in retaliation for the recent decision of the European Union to impose an embargo on Iranian oil.

But there was confusion later in the day, when Iran's Foreign Ministry announced there would be no cut off of oil sales to Europe.

This is all taking place amid a backdrop of growing tension between Iran and Israel. The Israeli government continues to talk about the possibility of airstrikes against Iran's nuclear facilities.

And in the murky shadow war between the two, Israel accused Iran of targeting Israeli diplomats for assassination this week in Georgia, India and possibly Thailand.