Accessibility links
Syria's Neighbors Fear That Fighting Could Spread Syria borders several volatile countries in the Middle East, and there are mounting concerns that Syria's violence will lead to turmoil in neighboring states. A shootout in Lebanon last week was linked to the Syrian conflict. 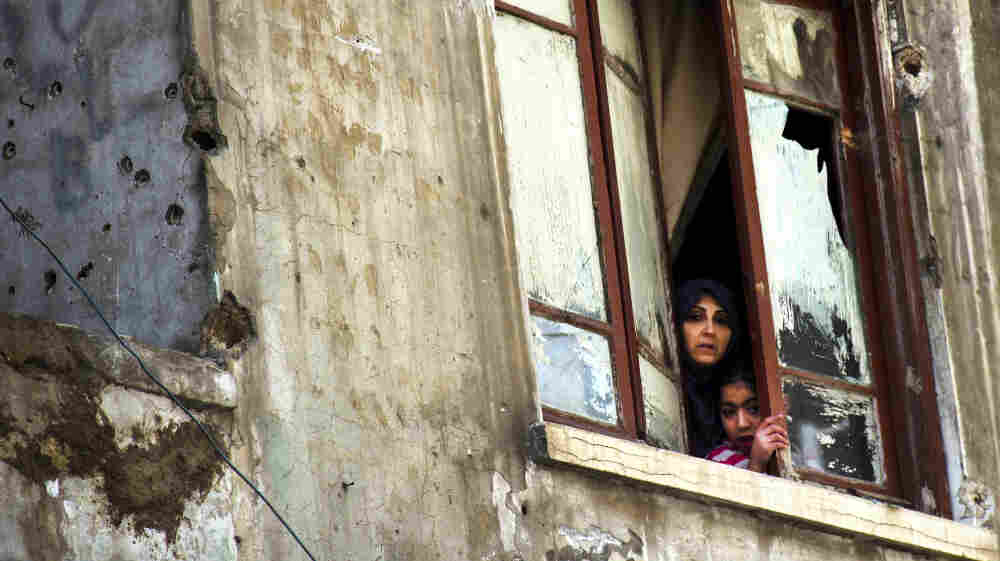 The fighting in Syria was seen as a spark for clashes in the Lebanese city of Tripoli last week. Here a Lebanese woman and her daughter look out the window of their bullet-pocked home in Tripoli on Sunday, Feb. 12. Adel Karroum/EPA /Landov hide caption 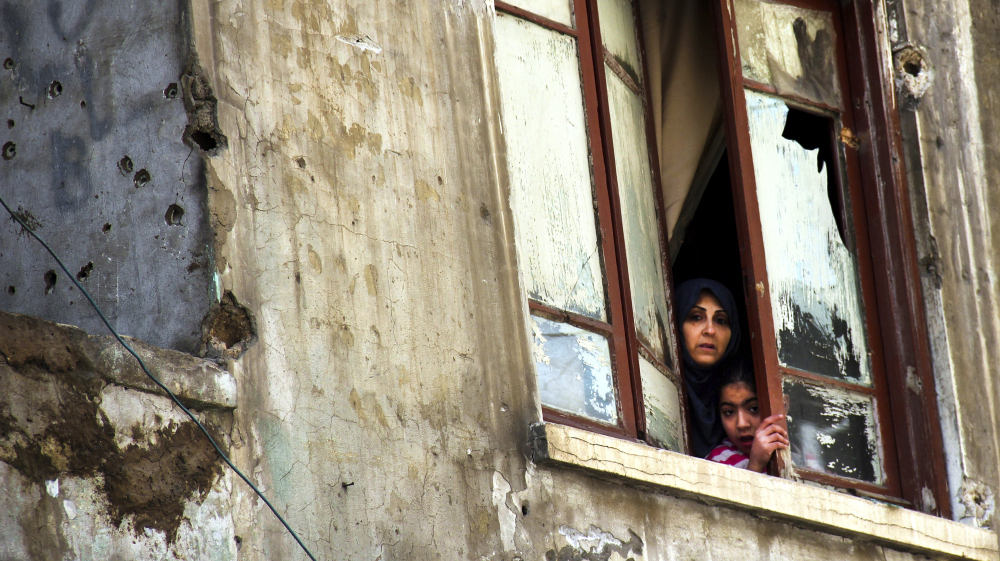 The fighting in Syria was seen as a spark for clashes in the Lebanese city of Tripoli last week. Here a Lebanese woman and her daughter look out the window of their bullet-pocked home in Tripoli on Sunday, Feb. 12.

Now that the uprising in Syria has turned into a heavily armed conflict, many in the region are worried that the violence will spread beyond its territory.

Syria borders Iraq, Turkey, Jordan and Israel, as well as Lebanon, where clashes erupted last Friday in the northern coastal city of Tripoli.

Sunni Muslims in one Tripoli neighborhood began protesting against Syrian President Bashar Assad. They put up a huge banner on the side of a mosque that had a picture of Assad, wearing a military uniform, with a big red X across his face.

Trouble is, that banner was in clear view of the next neighborhood over, which is made up of Alawites. The Alawites are an offshoot of Shiite Islam, and they support the Syrian president, who is also an Alawite.

As the protests swelled, shots started flying in Tripoli. Men from the two neighborhoods fired on each other with rifles and rocket propelled grenades. Building were pocked with bullets, and at the end of the day, three people were dead.

Some of the older streets have balconies that look like they're
falling down because they've been shot so many times. In fact, these bullet holes have been around for a long time. In some cases, for years.

That's because tensions between these two neighborhoods have existed for generations, and disputes are often played out with bullets.

Still, the latest flare-up has people in Lebanon and elsewhere in the region concerned that Syria's conflict could easily spread. After all, Lebanon had its own civil war from 1975 to 1990 and many of the old divisions still remain.

The conflict in Syria is exposing ethnic and sectarian divides. Syria is ruled by Assad and other Alawites, yet they make just a little over 10 percent of the population. Most Syrians are Sunnis. The country also has substantial Kurdish and Christian populations. 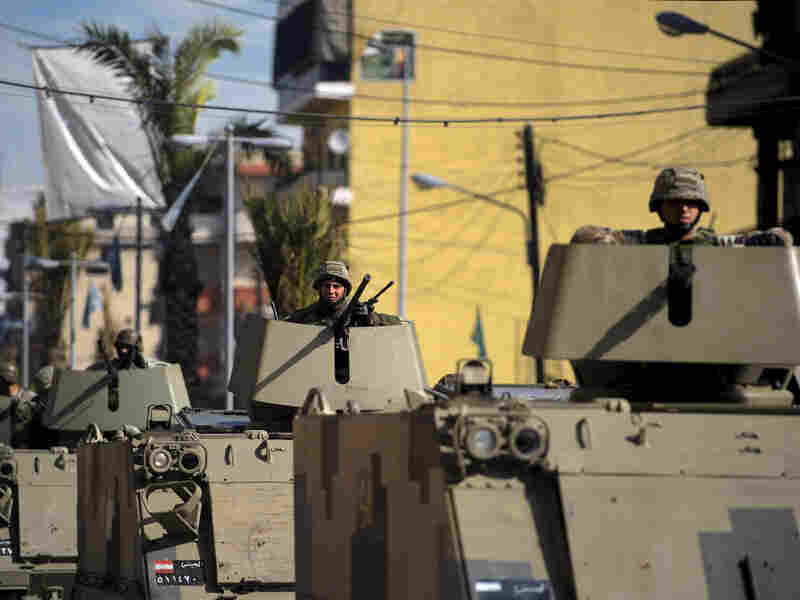 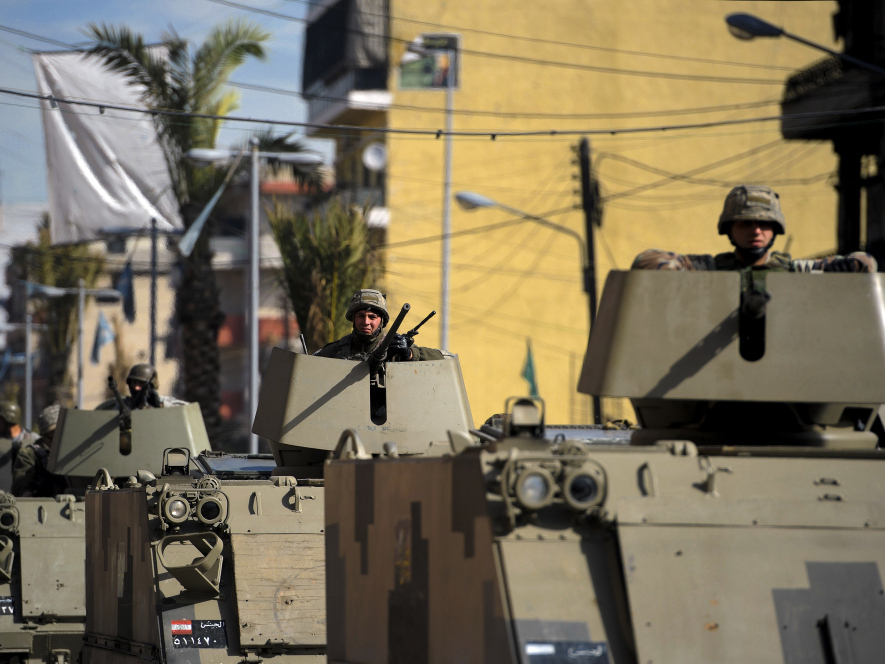 Lebanese soldiers patrol in the northern city of Tripoli on Sunday, Feb. 12, following clashes between Lebanese Sunni Muslims, who oppose Syria's regime, and Alawites, who support it. The rival Lebanese factions fired guns and rocket-propelled grenades at each other last week, killing three people.

Yezid Sayigh, with the Carnegie Middle East Center, says that as the Syrian regime's hold on the country erodes and the opposition gains strength, these divides will only sharpen.

"I think that the militarization of the opposition in Syria will lead not only to fragmentation of armed forces inside Syria, but that it will necessarily bring in the regional geo-political conflict and rivalries in a way [that] will destabilize neighbors," says Sayigh.

To imagine all the scenarios of a regional conflagration can make your head spin.

One possibility is that the Syrian regime will encourage various groups to act out against neighboring states. Turkey, for example, has gone from being a Syrian ally to a harsh critic of the Syrian regime over the past year.

Sayigh says the Syrian regime could encourage the Kurds of Syria to help Kurdish militants carry out attacks in Turkey. Or, he says the Syrian opposition, made up mostly of Sunnis, might embolden Sunni leaders in Iraq to try and break off into their own, independent region.

And then there's the Al Qaida factor.

In recent days, the head of al-Qaida, Ayman al Zawahiri, released a video calling on all Muslims to support the Syrian uprising. This feeds directly into the Syrian regime's narrative that the uprising is not a grassroots movement, but rather a grand act of terrorism, sponsored by America and Israel.

While the Syrians have not produced evidence to support such a theory, the bloodshed keeps getting worse. Two car bombs recently killed 28 people in the Syrian city of Aleppo. And Iraqis from notorious militant enclaves are pledging support and guns.

Andrew Tabler, with the Washington Institute for Near East policy, says it's still too soon to say that al-Qaida has entered the Syrian fray.

"The Syrian government permitted these groups to be in Syria for years, as long as they transited Syria and they went to places like Iraq or Lebanon to fight against the regime's enemies," Tabler said. "Now that technology, the technology of the car bomb is coming back to bite them. Is it actually al-Qaida? We're not exactly sure."

But the technology to do this, the know-how, and the people to do it have been in Syria, at the invitation of the Assad regime for almost a decade. So it's no surprise that people wanting to fight back would take matters into their own hands in such a way.

So far there's been no al-Qaida claim of responsibility for the Aleppo attack, or for similar, earlier attacks in Syria's capital, Damascus.

Still most analysts agree that the longer this conflict rages on, the more likely it is that many of these scenarios could play out.