Accessibility links
Mexican Cartels Push Meth Beyond U.S. Market Police in Mexico arrested a man they say is one of the country's largest methamphetamine producers. The arrest comes as Mexican drug gangs are moving aggressively to try to dominate methamphetamine markets not just in the U.S. but throughout Latin America and even Asia. 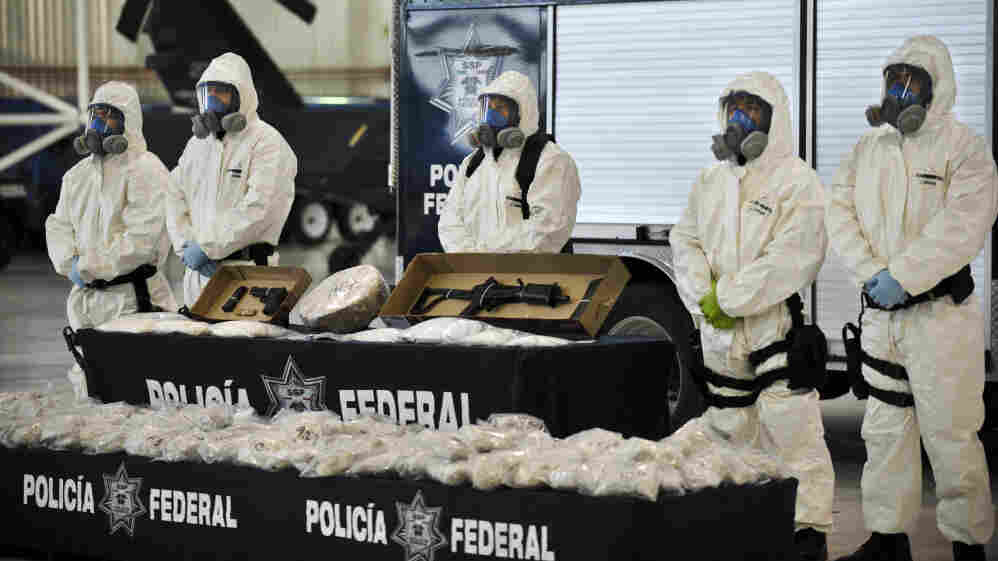 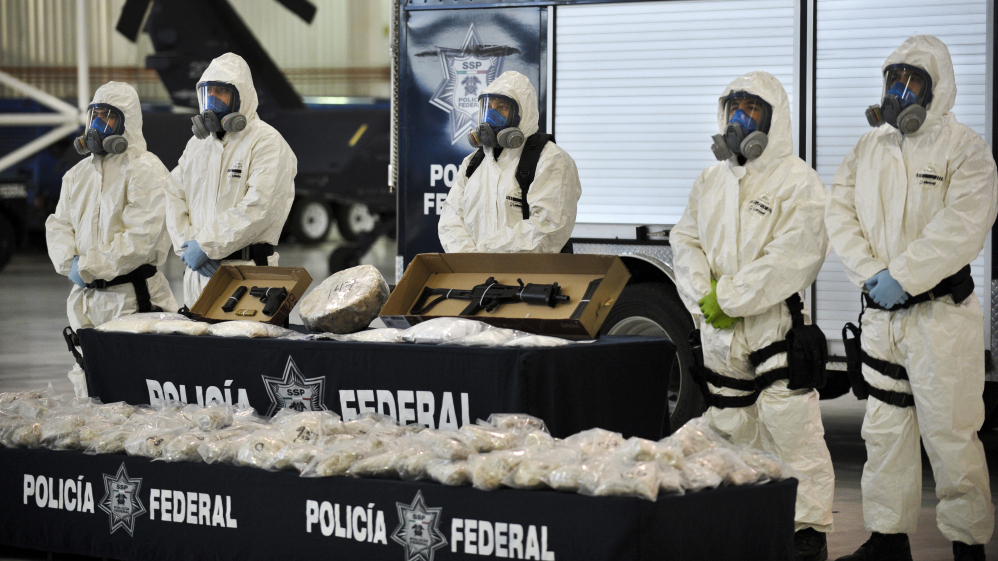 Mexican Federal Police, some of them covered head to toe in white hazardous-materials suits, paraded Jaime Herrera Herrera in front of the media in handcuffs this week. Officials say he was the methamphetamine mastermind for Mexico's most wanted man, Joaquin "El Chapo" Guzman, who runs the powerful Sinaloa cartel.

Ramon Eduardo Pequeno, the head of the anti-narcotics division of Mexico's federal police, says Herrera trafficked tons of methamphetamines into Southern California between 2008 and 2009 alone. The Mexican drug cartels started out smuggling marijuana. They then expanded into cocaine. Now they're making a major push into synthetic drugs.

Last week the Mexican Army raided a ranch in Jalisco, near Guadalajara, and seized what they claimed was 15 tons of methamphetamines. Announcing the bust, Gen. Gilberto Hernandez Andreu said the lab had 15 reactors for cooking the drugs. He called it a historic seizure.

Some drug experts have questioned whether this was really 15 tons of pure, street-grade product, an amount equivalent to half of all the methamphetamines confiscated worldwide in 2009. But even if the purity were low, this was still a huge laboratory capable of producing significant quantities of narcotics.

"Certainly [it] is a big blow to whoever was the owner of the shipments and the lab," says Antonio Mazzitelli, the regional representative for the U.N.'s Office on Drugs and Crime for Mexico, Central America and the Caribbean.

The U.N. says amphetamines are now the fastest-growing illicit drug in the world. Last year synthetic narcotics surpassed heroin and cocaine to become the second-most-used illegal substances on the planet after marijuana.

"The major drug-trafficking organizations, particularly the Mexican one, are trying to conquer new markets, to their methamphetamine production," Mazzitelli says. "That means Latin America, but ... also other markets such as the Asian one."

Methamphetamines are sold on the street as speed, crystal or ice. The drug can be highly addictive and ravages the bodies of long-term users.

In 2009 Weisheit came out with a book on the history of methamphetamines. He says the Mexican drug cartels are well-positioned to expand into the business.

"They're in a country where corruption is rampant, which means that getting the precursors isn't going to be that big of a challenge," he said.

And he says getting bulk shipments of those precursor chemicals is the biggest challenge facing anyone who wants to produce industrial quantities of methamphetamines.

Because the Mexican cartels already have sophisticated networks to smuggle marijuana and cocaine into the U.S., they can move their crystal through those same channels. Weisheit says over the past couple of years Mexican meth has moved steadily from California and the border region into the heartland.

"For a long time in the Midwest here, if you saw methamphetamine, it was almost entirely in rural areas and almost entirely homemade," he said. "To the extent it's not homemade anymore, it's Mexican and it's working its way across the country as they ramp up production."

He expects that in the coming years the amount of Mexican methamphetamines for sale on American streets is only going to grow.