Accessibility links
GOP Debates As Must-See TV? Why You Should Watch The monthlong lull in the Republican debate cycle may have come as a welcome break to some likely voters and political observers. The debates will be back soon enough. But turn away from them at your own risk — it's precisely at this point in the campaign season when they might be most decisive.

GOP Debates As Must-See TV? Why You Should Watch

GOP Debates As Must-See TV? Why You Should Watch 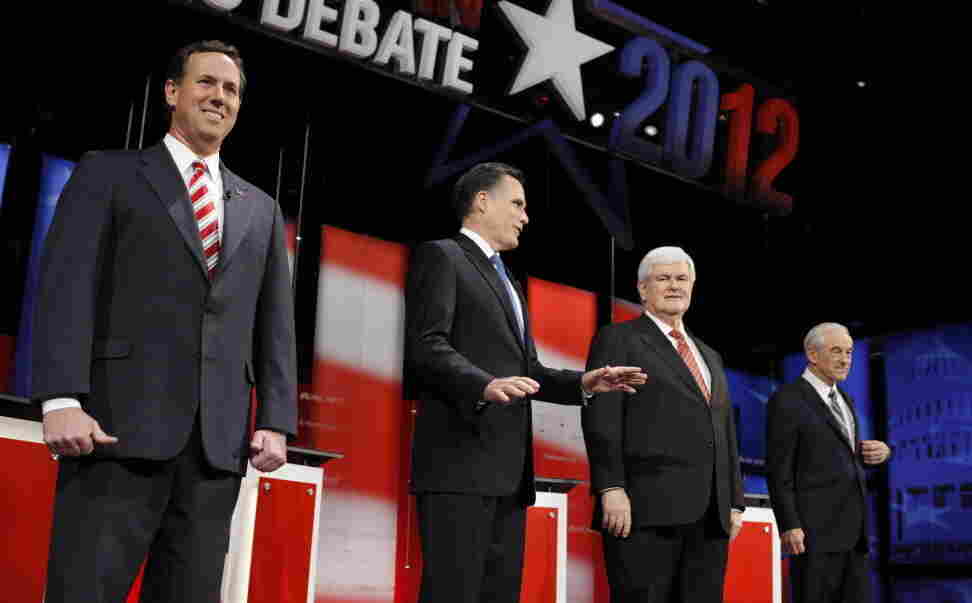 The Republican presidential candidates took the stage for a Jan. 23 debate at the University of South Florida in Tampa. Chip Somodevilla/Getty Images hide caption

We've had nearly a monthlong lull in the Republican presidential debates, but brace yourself — they'll be back soon enough.

Although TV ratings have been relatively high, many likely voters say they've got debate fatigue, and even some of those most interested in the debates' outcome are probably enjoying the break.

Fox News' Chris Wallace has said the GOP debates are "stupid" and that "it is ridiculous how many debates there have been." Karl Rove bemoaned their shortcomings in a Wall Street Journal op-ed: "Debates have nearly crippled campaigns, chewing into the precious time each candidate has to organize, raise money, set themes, roll out policy and campaign." And Arizona Sen. John McCain said the debates were simply "deteriorating into mudslinging."

Frankly, sometimes your goal is just to survive — get out without harm, particularly with these multiparty debates like we've seen so many times in the GOP primaries.

The 20th debate this campaign cycle takes place Wednesday in Arizona, and there are at least two more next month. But turn away at your own risk. While critics might decry their proliferation and negative tone, it's precisely at this point in the campaign season when the debates might be most decisive.

By this time in 2008, McCain was clearly looking like the Republican nominee. This year, the field is anything but settled — and unsettled is fertile soil for debates, says Alan Schroeder, a journalism professor at Boston's Northeastern University and author of Presidential Debates: 40 Years of High-Risk TV.

"There are still enough question marks out there about who the nominee should be that the debates continue to be important," Schroeder says.

In what has already proven to be one of the wildest primary rides in decades, he says, the debates have helped end some candidacies while throwing others a lifeline.

"The candidate who uses the most evidence — facts and statistics — is the one who is most often seen as losing the debate," he says.

Case in point: the October 1992, "town hall" debate between incumbent President George H.W. Bush and Bill Clinton. Bush struggled to answer a question from a woman in the audience about how the national debt personally affected each of the candidates' lives.

"At that point, candidate Clinton saw an opportunity and seized it," says Matt Eventoff, a communications consultant who owns Princeton Public Speaking.

Clinton "saw that that young woman was not getting the answer she was looking for. ... He looked right at her, direct eye contact. And if you watch the video clip, he didn't break eye contact," Eventoff says.

"It was a personal connection, and it was really a one-on-one conversation playing out before millions of people," he adds. "It was brilliant and I think that was one of the game-changers in the campaign."

"The first debate that Michele Bachmann took part in on June 13, she was really good in it. She had this really positive debate performance, so she was the headline. All eyes were on her," Schroeder says. "As we've gone through this, that focus has shifted greatly among the various candidates. Herman Cain was a favorite there for a while. Rick Perry, prior to his debate performance, but just as a new candidate, he was the one that all the focus was on."

Oops. A highly embarrassing debate moment for Perry changed all that, and the feeling that his candidacy was finished was almost palpable, says Mitchell McKinney, a political communications professor at University of Missouri-Columbia who has written several books on the presidential election process.

"Several of this cycle's 'oops' moments have been significant," McKinney says. Think of Mitt Romney's $10,000 bet with Perry.

By contrast, Newt Gingrich caught an updraft weeks later by forcefully redirecting a moderator's question in a debate ahead of the South Carolina primary. And Ron Paul was able to channel his supporters' anger over the perception that he was being ignored.

And now Rick Santorum, who started out on the fringes in the race, has slowly moved to center stage. The former Pennsylvania senator has had no real standout debate moments, but his performance has been credible.

Often, that's good enough, says Tom Ingram, who served as debate coach for Jon Huntsman before the former Utah governor and ambassador dropped out of the race last month.

"Frankly, sometimes your goal is just to survive — get out without harm, particularly with these multiparty debates like we've seen so many times in the GOP primaries," says Ingram, who also helped manage campaigns for Tennessee's then-Gov. Lamar Alexander and former Sen. Fred Thompson.

McKinney agrees that this year's Republican debates "have had a great effect on the primary race and influenced who is seen as the front-runner." But he points out that the debate tactics will have to change once the GOP nominee heads into the general election.

At their core, McKinney says, debates are more about likability than anything else, and the style that gave some candidates an edge in the primaries probably won't play well in the lead-up to November.

"In the primary, we have seen repeatedly that what carried the day," he says, "is playing to a partisan audience — quick retorts or a red-meat phrase that got that audience cheering and responding, that made the candidates seem like they won.

"You don't find that in the general election," McKinney says.