Accessibility links
The Woman Behind Egypt's Crackdown On Aid Groups Faiza Aboul Naga, a holdover from Hosni Mubarak's regime, is emerging as the driving force behind Egypt's efforts to clamp down on U.S.-funded pro-democracy groups. The female Cabinet minister says U.S. aid has been used to shape post-revolution Egyptian politics, stoking widespread xenophobia. 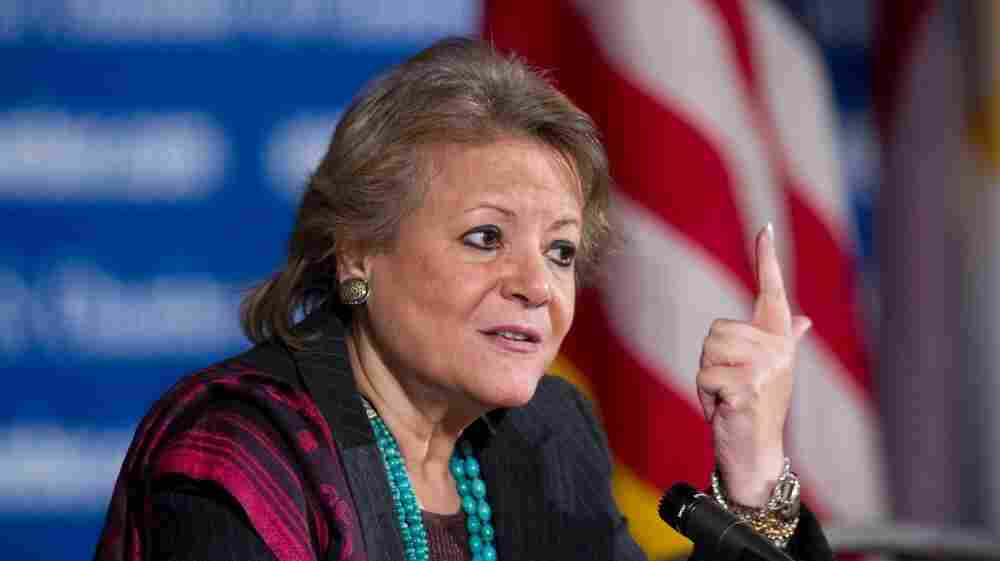 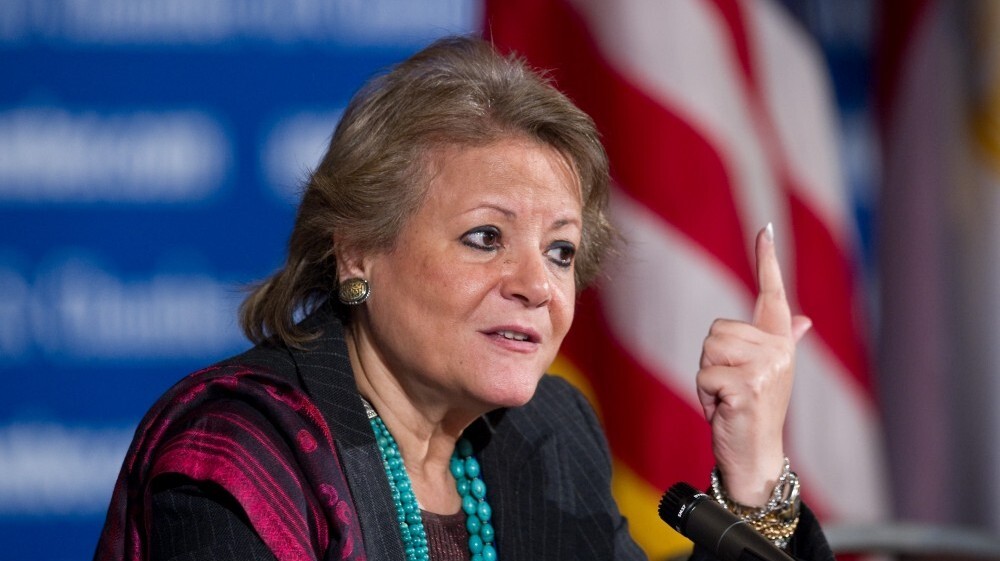 Egyptian Planning and International Cooperation Minister Faiza Aboul Naga (shown here in Washington, D.C., last April) has repeatedly warned Egyptians about the alleged danger foreigners pose to their country. She is the driving force behind recent efforts to prosecute 43 people, including American and other foreign democracy activists, for operating illegally in Egypt.

In Egypt, a female Cabinet minister has emerged as the driving force behind a crackdown on U.S.-funded pro-democracy groups.

The attacks of Faiza Aboul Naga — a holdover from the regime of ousted Egyptian President Hosni Mubarak — have made her a hero to many Egyptians who believe she is defending their country's honor. But the threat she poses to billions of dollars in U.S. aid and international loans could make her power short-lived.

Aboul Naga, minister of planning and international cooperation, has warned Egyptians time and again about what she sees as the danger foreigners pose to her country.

During a recent press conference broadcast on state television, the 61-year-old said American aid has been used to shape politics in Egypt since last year's revolution. That is something no country can allow, she said.

Such claims, which are now almost daily fodder in Egypt, are stoking widespread xenophobia.

Many foreign aid workers say they can't understand why the woman who spent many years in the West has them in her sights.

Les Campbell is the Middle East and North Africa director for the National Democratic Institute, one of the groups under attack.

"I don't think anyone really knows the exact reason. There are as many conspiracy theories as there are Egyptians," he says. "I think probably the best explanation is that this is a distraction, perhaps, from the very serious problems that are facing the country."

Those problems include a weakening economy, lack of services and rising crime.

Hossam Bahgat, who heads the Egyptian Initiative for Personal Rights, says Aboul Naga is using the issue of nongovernmental organizations to enhance the image of the interim government.

"Her statements clearly show that she believes any work to promote democracy or to promote human rights for that matter is just a front for intelligence or espionage work," Bahgat says.

As a result, 43 people — including many Americans and other foreigners working for pro-democracy groups — were charged with operating illegally in Egypt.

Those under investigation deny the charges. They say the training they've offered is standard fare for any developing democracy.

"So a dialogue, with her sitting down explaining how we work, the demand for our work, the partnership with Egyptians, would be very nice," he says.

But Aboul Naga has refused to meet with them. She also declined to be interviewed for this story.

Her critics say she is pursuing an agenda first laid out by her friend and former boss, Mubarak, who did not like being dependent on the West.

Those involved in development in Egypt say Aboul Naga has for years sought complete control of Western aid to Egypt. They say she wanted to make Egyptian groups and projects dependent on her.

So the minister balked when American officials began funding pro-democracy and other programs directly, to the tune of $160 million in the past 12 months.

But many in Egypt fear what Aboul Naga is doing will backfire in the long run. They say desperately needed grants and loans hang in the balance.

"I see her as pursuing a scorched-earth policy for Egypt," Soliman says. "You know, as Mubarak said before he left, 'Apres moi le deluge' — 'It'll be chaos when I leave.' And she is the source of a great deal of this chaos right now."