Accessibility links
Philadelphia Priest Faces Trial On Child Abuse Cover-Up Charges Monsignor William Lynn of Philadelphia is the first cleric to be criminally charged with covering up child sex abuse by a priest. Jury selection begins Feb. 21 in a case that will set enormous precedent for future sex abuse litigation. 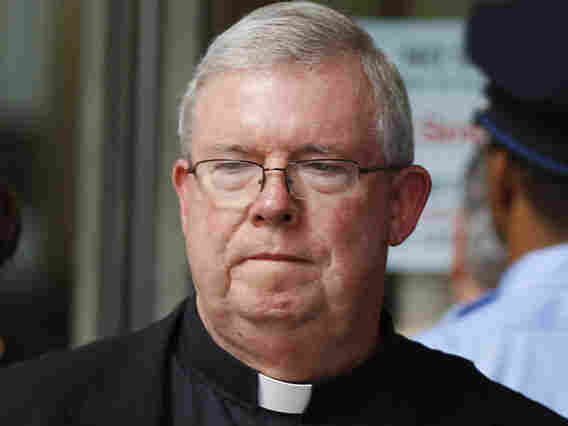 Monsignor William Lynn is charged with conspiracy and child endangerment for failing to act on reports of sex abuse in the Philadelphia archdiocese. Matt Rourke/AP Images hide caption 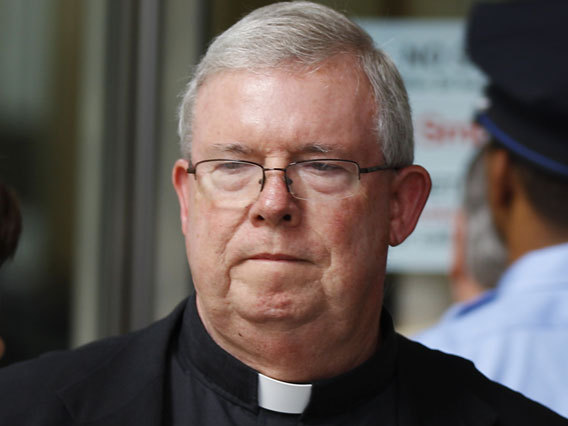 Monsignor William Lynn is charged with conspiracy and child endangerment for failing to act on reports of sex abuse in the Philadelphia archdiocese.

Between 1992 and 2004, Monsignor William Lynn was the Archdiocese of Philadelphia's point person for allegations of clerical abuse. When he heard a claim, he was supposed to investigate and, if warranted, remove or turn the priest over to police.

"He willingly oversaw numerous reports of child sex abuse," says Cardozo law professor Marci Hamilton, a consultant to the first grand jury. "And he willingly put these men in positions where they had second, third, fourth opportunities to abuse children in new settings."

In most of those cases, the statute of limitations barred prosecutors from bringing criminal charges. But two cases have not expired, and prosecutors say Lynn criminally endangered two young men, allegedly raped when they were 10 and 14, by looking the other way.

Now the case is headed for trial in a Philadelphia courtroom, with jury selection scheduled to begin Feb. 21. Lynn has been charged with endangering the welfare of the young men and conspiracy to cover up the abuse. Although other senior Catholic officials have been criminally charged for allegedly covering up sex abuse claims, Lynn is the first to go to trial.

Challenges For The Prosecution

Hamilton says the evidence against Lynn is extraordinary. Indeed, Lynn himself told the first grand jury that he let allegations "fall through the cracks" and failed to tell schools or parishes about the alleged abusers because "you don't always put all your dirty laundry out."

Church people are watching this around the country very, very closely.

Now the judge presiding over the case, Common Pleas Court Judge M. Teresa Sarmina, has ruled that some of that evidence can be introduced at trial — including how Monsignor Lynn handled the cases of 22 priests who were accused of abuse.

"That's very, very harmful to his case," Hamilton says. "It shows none of this was just random or arbitrary, but rather that he was engaged in a conspiracy to put children at risk — and he did it repeatedly."

Sarmina has prohibited all attorneys involved in the case from speaking about it. But Janis Smarro, a criminal law attorney in Philadelphia with no connection to the trial, says it may not be a slam dunk for prosecutors. Lynn may have a strong legal defense, she says, because it appears that the statute as written at the time does not cover him.

Under that statute, a person could be criminally prosecuted if he endangered the welfare of a child by being aware of the threat to the child and failing to protect him or her.

"Normally it covers the situation where the person has a direct duty to a specific child," like a parent, a guardian, a baby sitter or a nanny, Smarro says. "And you certainly don't have that in this case."

The law has since been revised to include those who supervise an alleged abuser. But Lynn's lawyers say the newer, stricter standard can't be applied to their client.

Lynn's trial is scheduled to begin in late March, and for the Catholic Church, it's a big deal.

Cafardi says most Catholic dioceses have cracked down on pedophile priests. But there are some, such as Philadelphia's, that have been slow to get the message. He says charging administrators in the church for covering up abuse may be the only way to stop it.

"These prosecutions hopefully will make chancery officials aware that they, in fact, can themselves be criminally liable whenever they do these kinds of things," he says.

Hamilton and many others believe that Lynn will reach an agreement with prosecutors before the case goes to the jury.

"He's going to have to go through a whole trial with the introduction of mountains of evidence that probably he and the Archdiocese don't want publicly aired," she says.

Hamilton notes that high-level Catholic officials in other dioceses have been called to testify in sex abuse cases, but they've always settled before the official has to take the stand.

The audio of this story, as did a previous Web version, incorrectly says that high-level Catholic officials in other dioceses have been charged with covering up sexual abuse. The officials referred to have been called to testify in abuse cases but were not themselves charged.