Accessibility links
Azerbaijan: Where East Meets West, A Den Of Spies Wedged between Russia, Turkey and Iran, the small Central Asian nation of Azerbaijan has long been a magnet for secret agents. Now, as tensions rise over Iran and its nuclear program, the former Soviet republic has been aligning itself with the West and Israel — despite traditional ties with Iran. 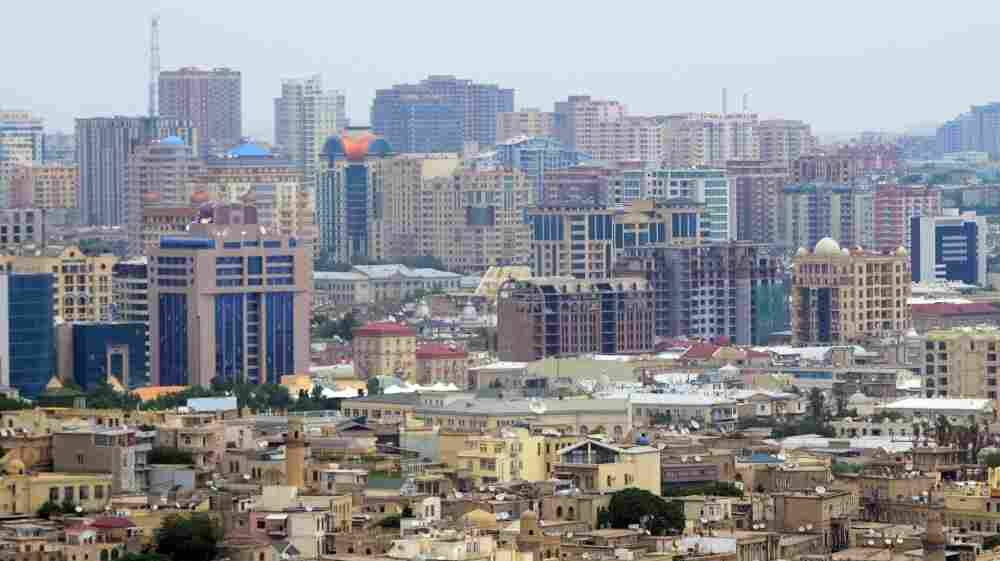 Thanks to its strategic location, the small Central Asian country of Azerbaijan has long been a hot spot for rival intelligence agents, from countries such as Russia, Turkey, Iran and Israel. Here, a view of Baku, the capital, in June 2011. Johannes Eisele/AFP/Getty Images hide caption 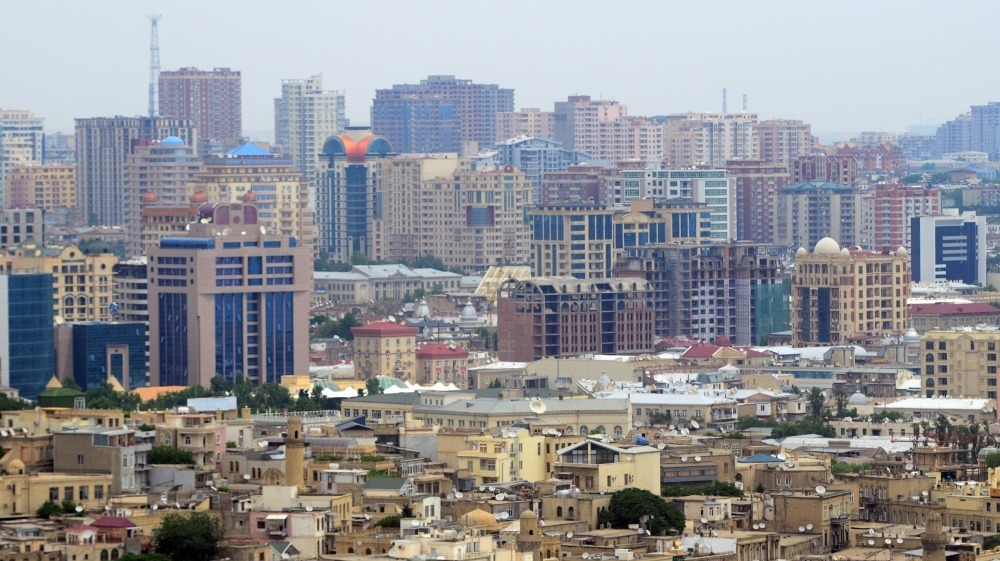 Thanks to its strategic location, the small Central Asian country of Azerbaijan has long been a hot spot for rival intelligence agents, from countries such as Russia, Turkey, Iran and Israel. Here, a view of Baku, the capital, in June 2011.

The small Central Asian country of Azerbaijan has found itself caught up in the rising international tensions over neighboring Iran and its nuclear program. Despite traditional ties with Iran, the former Soviet republic has increasingly aligned itself with the West, and with Israel.

An incident at a recent soccer match in the Iranian city of Tabriz is still a point of pride in Azerbaijan. In the middle of the match, hundreds of ethnic Azeris in the crowd broke out their national flags and began to chant that the city belongs to them.

The video was a big hit in Baku, the capital of Azerbaijan. It was a rare demonstration by Iran's ethnic Azeri minority, many of whom argue that northern Iran should be part of a greater Azerbaijan — a sentiment that is shared by many in Baku.

And that is not the only point of tension between the two Central Asian neighbors. Recently, Baku and Tehran have traded accusations of cross-border conspiracies and assassinations.

Wedged between more powerful neighbors Russia, Turkey and Iran, Azerbaijan has long served as an East-West meeting ground and something of a den of spies where rival intelligence agents keep a close eye on one another.

Mehman Aliyev is director of Turan, an independent Azerbaijani news agency. He says that Azerbaijan realizes its position as a kind of listening post.

"Of course Azerbaijan is the intersection of many foreign states, whether it's Russia, Iran, Turkey. It is where they mingle. And where they obviously collect intelligence," he says.

Arastun Orujlu, a former counterintelligence officer and director of the East-West Research Center in Baku, compares Azerbaijan's intelligence community to that of Norway or Casablanca during World War II. 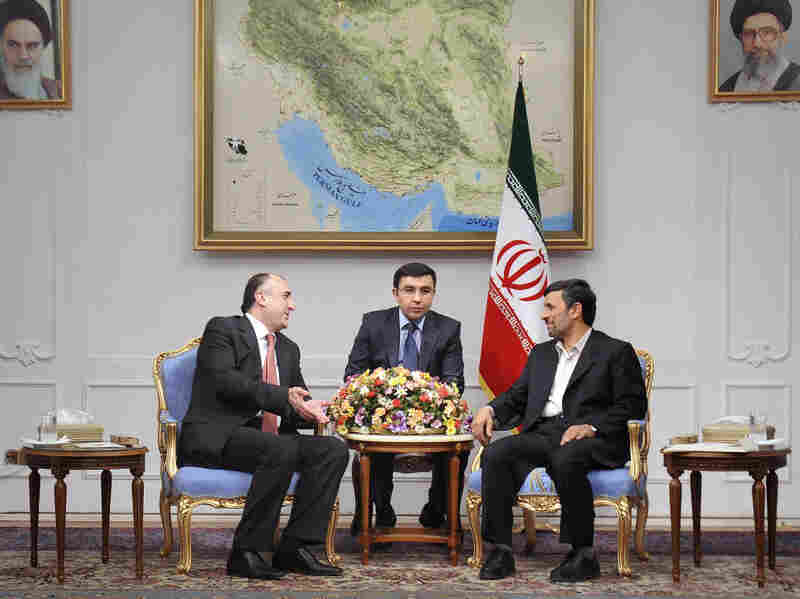 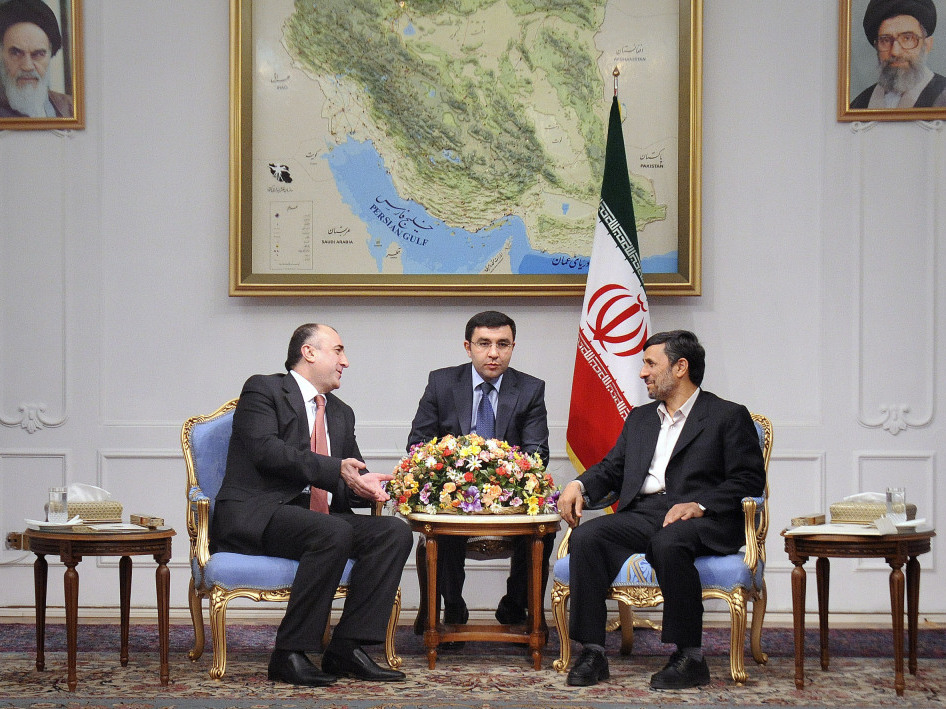 Iranian President Mahmoud Ahmadinejad (right) meets with Azerbaijan's foreign minister, Elmar Mammadyarov (left) in Tehran in March 2011. Tensions have been growing between the countries, including a recent incident in which Tehran summoned the Azerbaijani ambassador to protest alleged Israeli intelligence activity in Azerbaijan.

Western and Russian agents are deployed, and Orujlu estimates that thousands of Iranian agents operate in Azerbaijan.

Orujlu says Iran's intelligence is very active in Azerbaijan, which he says acts as a "buffer zone" between Iran and Russia, as well as Iran and the West.

According to Aliyev, the journalist, it's long been an open secret that Azerbaijan serves a purpose for Iran and for the West — including Israel, which also has intelligence agents on the ground in the country.

"Iran is trying to find out what are the military operations of the Western states intended for Iran," Aliyev says. "And of course Israel and the West [are] trying to use the opportunity of being here to find out what is happening in Iran," he says.

In fact, the Iranian state-run media recently reported that Tehran had summoned Azerbaijan's ambassador to protest alleged Israeli intelligence activity there, including allowing Israel to launch activities against Iran from Azerbaijani territory and aiding in the escape of Israeli agents Tehran says were behind the recent killings of Iranian nuclear scientists.

Israel's relationship with Azerbaijan has blossomed in recent years, fueled by lucrative military and business deals. Israel buys 30 percent of its oil from Azerbaijan, and recently awarded a lucrative gas-drilling contract off its Mediterranean coast to an Azerbaijani firm.

Orujlu says that the ties between Azerbaijanis and Israel have grown so deep, that in the event of an Israeli military strike on Iran's nuclear facilities, many Azerbaijanis would side with Israel.

But some feel that all that could change in the case of an actual war, especially if it included attacks on areas inhabited by Iran's ethnic Azeris.

Ilgar Ibrahimoglu is imam of the Juma mosque in a suburb of Baku with a large Iranian population. He says that phobia of Iran has been increasingly encouraged in Azerbaijan.

"Every Azerbaijani," he says, "understands that this war will affect Azeris in Iran and holy sites there."