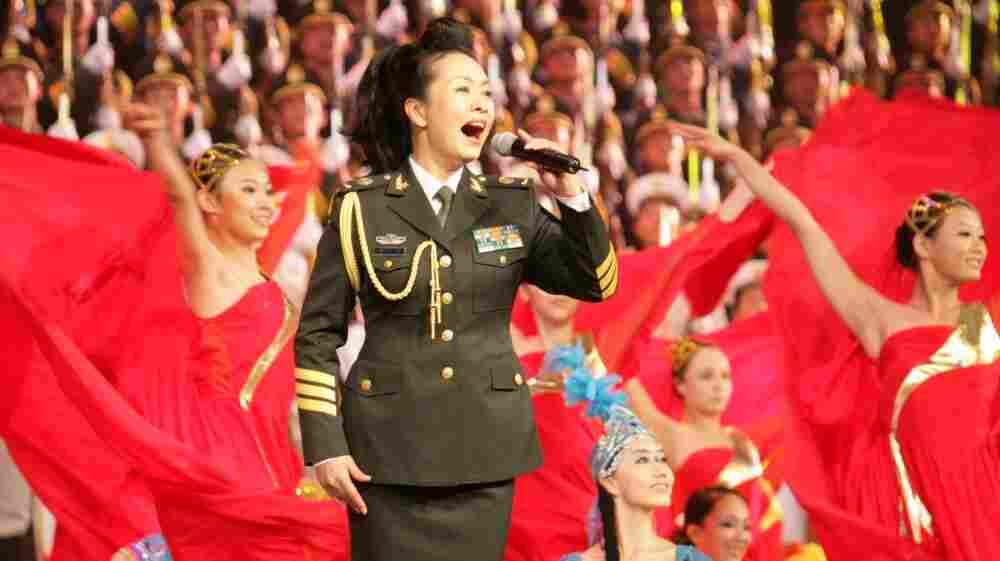 Peng Liyuan, the wife of Chinese Vice President Xi Jinping, sings during a July 2007 performance celebrating the 80th anniversary of the founding of the People's Liberation Army of China. Xinhua/Landov hide caption

There has been a lot of talk about China in the news this week in light of Vice President Xi Jinping's visit to the U.S. But there's one voice you probably haven't heard: the voice of Peng Liyuan, singing phrases like "The sweet aroma of grains drifts over the earth of China."

Peng is the wife of Vice President Xi and expected to be China's next first lady. She's also one of the most famous singers in China — so famous that it's been reported she stayed home while her husband met with President Obama and had an Iowa state dinner to avoid the possibility of upstaging her husband.

"Peng Liyuan has been touted now as sort of the Carla Bruni of China," says Ken Smith, a Hong Kong-based music critic for the Financial Times. He says that unlike France's pop-star-turned-first-lady, Peng met her husband before he hit the national stage, and her music isn't exactly topping today's pop charts in China.

"On The Good Earth Of China"

"On The Field Of Great Prospects"

"Her main claim to fame is that her work is very much rooted in a very nationalist style, just tailor-made for, you know, China's Central Television," Smith says.

Peng is a perennial performer on China's most-watched television event, CCTV's annual Spring Festival Gala, when she shows off her pipes and often her military stripes. Peng is also a major general in China's People's Liberation Army.

You can also find her on YouTube in puffy ball gowns and traditional costumes of China's ethnic minorities.

But her music "sounds simple but it's carefully calculated. It's meant to serve a national cause," Smith says. "It has all of the traditional elements that you think of as Chinese music. You have a big melody, a real stress on the high register of sound — nothing in the low to speak of. And when you think about it, these are all elements the listeners already know there, because that's what Peking opera is all about."

But her songs aren't all about the glory of China. They're also about good, old-fashioned love.