Accessibility links
Whitney Houston Fan: 'We Got Tears Outside The Perimeters' Celebrities joined Whitney Houston's family Saturday at a private funeral service for the pop superstar at her hometown church in Newark, N.J. On the streets outside, hundreds of fans gathered to pay their respects, but police barricades kept them several blocks away from the church. 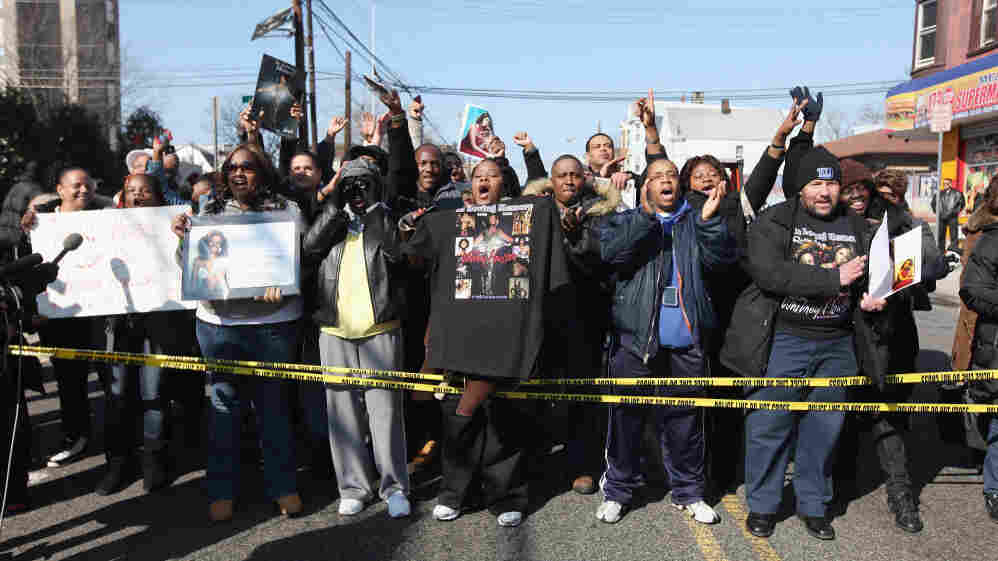 Fans mourn outside the funeral service for singer Whitney Houston in Newark, N.J., on Saturday. The pop superstar was found dead in a California hotel room a week ago. The cause of death has yet to be determined. Michael Nagle/Getty Images hide caption 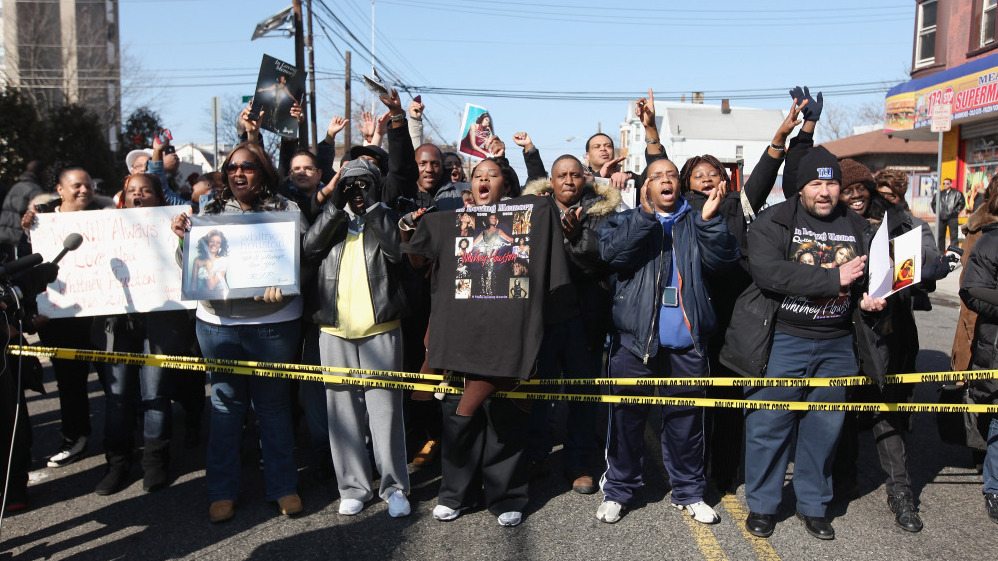 Fans mourn outside the funeral service for singer Whitney Houston in Newark, N.J., on Saturday. The pop superstar was found dead in a California hotel room a week ago. The cause of death has yet to be determined.

It was at the New Hope Baptist Church in Newark, N.J., where Whitney Houston first learned to sing, and it was there that friends and family gathered on Saturday to say goodbye to the pop superstar.

The star-studded service lasted more than three hours. Among those in attendance were Dionne Warwick, Kevin Costner and Alicia Keys.

Stevie Wonder performed his song "Ribbon in the Sky," while friends and family offered remembrances. Patricia Houston, the singer's sister-in-law, characterized Houston as a woman whose battles with addiction could not keep her from giving her fans what they wanted.

Whitney Houston was born in Newark, and the city has laid claim to her ever since. Though her family moved to a nearby suburb when she was 4, the Newark city council meetings are still preceded by Houston's performance of the Star-Spangled Banner.

On Saturday, hundreds of fans — many of them from Newark — gathered in the streets near the church to pay their respects.

"We love Whitney. We love her. I am Newark-born, Whitney was Newark-born," Felicia Nace said. "I have a lot of respect for her work and [I watched] her climb to her heights from where she was."

Many of the fans were disappointed to see barricades put up by police to keep crowds several blocks away from the church.

"The fan base supported her 100 percent. That's what made her the superstar she was and still is now for us," Edward Thomspon said. "Let the fans get closer and show the love. We got tears outside the perimeters."

Wearing a T-shirt with Houston's image on it, Maurice Thompson agreed with his brother's sentiments.

"We [are] pushed to the side. We [are] like, three, four blocks away. I cried my eyes out last night. I love Whitney," he said. "All due respect to the family, I feel as though we should be able to somehow grieve with them. All you can see is the steeple to the church. Come on."

Before Saturday, there had been talk of holding a public service in a nearby arena, but those plans did not materialize. Some fans said they felt a private ceremony was the appropriate choice for the family.

"I think that this was the best thing for her family to have this in privacy," Nikki Hughes said. "The world had her for 40 years. Let them lay her to rest in peace like this."

Despite the police barricades, several street vendors had set up shop, selling posters, T-shirts and DVDs. Sabrina Hoskins set up a table with Houston merchandise near her pick-up truck, which blasted a mix of Houston's hit songs.

"Whitney had a voice like a bird, like a soaring bird. And when she sang, it was like the world was uplifted," Hoskins said. "I love her, and I pray for her daughter, because she's so young to [have] lost her mom. I guess God said it was time to come home."