Accessibility links
The Deep-Seated Meaning Of The American Sofa NBA supernova Jeremy Lin reportedly slept on one before the Knicks' winning streak. And Steve Jobs obsessed over finding the perfect specimen for his living room. During many periods of our lives, the sofa is at the epicenter. It is home base, North Star, study carrel, dining booth and royal throne rolled into one.

The Deep-Seated Meaning Of The American Sofa

The Deep-Seated Meaning Of The American Sofa 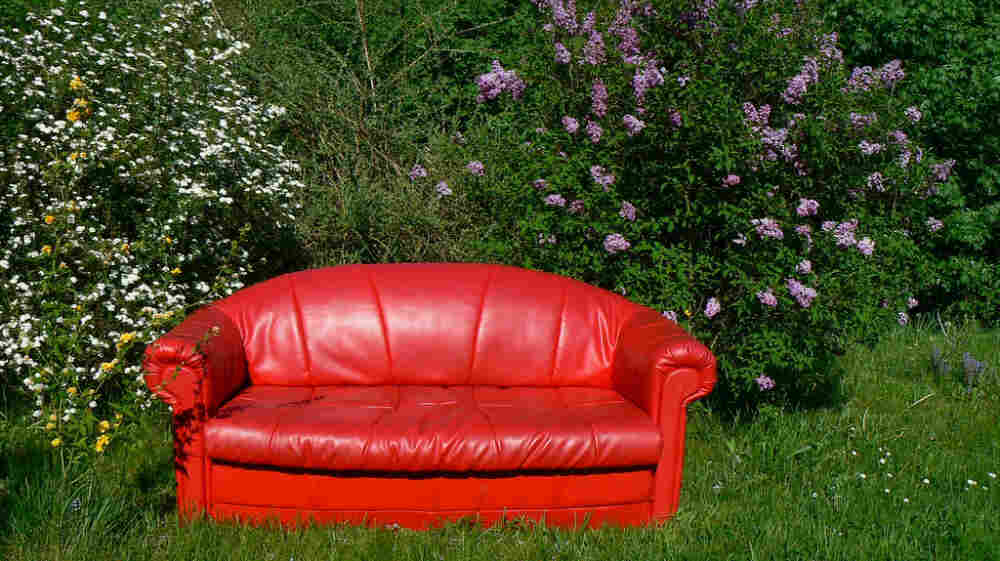 The sofa can be the epicenter of our lives. It is home base, North Star, study carrel, dining booth and royal throne rolled into one. Dierk Schaefer/Flickr hide caption 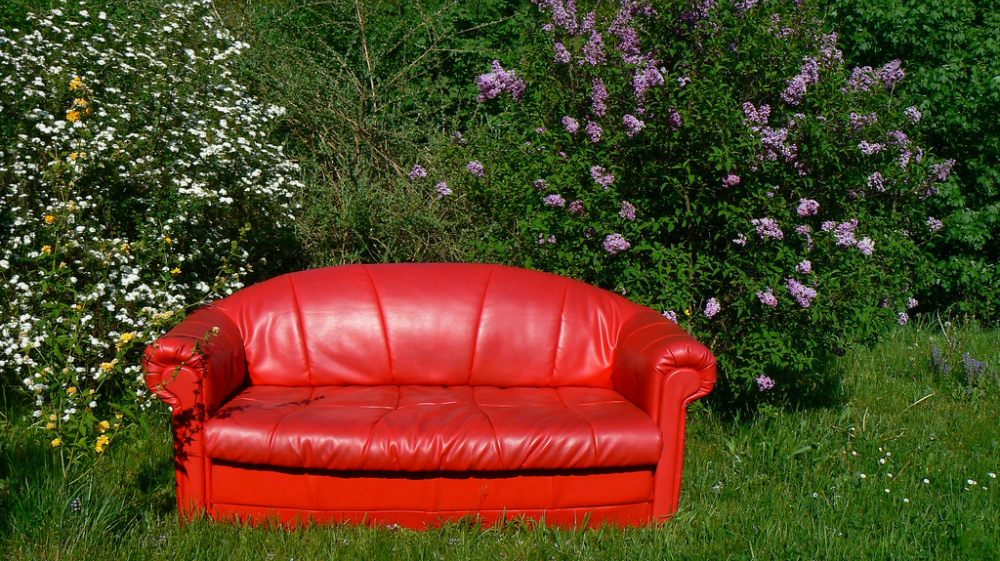 The sofa can be the epicenter of our lives. It is home base, North Star, study carrel, dining booth and royal throne rolled into one.

A tale of two couches: The first, pictured recently in the New York Daily News, is where NBA supernova Jeremy Lin reportedly spent nights — perhaps battling Linsomnia — before erupting into a game-changing beast and leading the New York Knicks to a euphoric win streak.

The other is from the much-examined life of Steve Jobs. When he and his wife, Laurene, moved into a two-story, red-brick home in Palo Alto, Calif., in the early 1990s, they engaged in endless discussion about furnishings. "We spoke about furniture in theory for eight years," Laurene tells Jobs biographer Walter Isaacson. "We spent a lot of time asking ourselves 'What is the purpose of a sofa?'"

Most of us do not have a pro basketball star crashing on our couch. And we don't take forever to scout out a sofa. But we do understand in a somewhat hazy way that during many periods of life the sofa is at the epicenter. It is home base, North Star, study carrel, dining booth and royal throne rolled into one.

What is the difference between a couch and a sofa, anyway?

"The couch is the thrash-able object at the center of a well-used living room, upon whose back toddlers straddle, whose cushions teenager become permanent fixtures, and which, at the end of the day, after the children are in bed, a couple might relax with a short glass of bourbon," explains Benjamin Parzybok, author of the novel Couch. "A sofa, on the other hand, sits under a trimly hung painting and lives in a house in which traffic passes it by. It would be white, of course, or another color begging for stain. And most people living at the house of a sofa would be forbidden to sit upon it at one time or another."

A sofa might have two seats; a couch might have three or more. But not always. The word sofa comes from an Arabic word for bench; the word couch is derived from an Old French word for recline. A sofa, as Parzybok points out, is more of a proper place to sit.

"A couch used to be a piece that you lie down on — like a day bed," says Ellen Lupton, curator of contemporary design at the Smithsonian Cooper-Hewitt Museum in New York.

These days the terms couch and sofa are used pretty much interchangeably — in life and in the accompanying story.

Couches are not always comfortable, of course. I am writing this while sitting on a sea-green sofa. We paid too much for it. It's terribly uncomfortable, yet we can't haul it away because it holds way too many memories.

Call it a couch or a sofa, the thing with cushions is arguably the most beloved — and most abused — piece of furniture we may ever own. And it's a good place to sit and contemplate the question: Just what is the purpose of the Great American Sofa?

Lugging It Up The Stairs

The Great American Sofa is where: Sweet-eyed relatives sit to gaze at us — just home from the hospital — for the first time. We first nuzzle into our parents' laps. We discover how to hold hands and how not to kiss. We learn the physics of cushions and ways to create — or eliminate — meaningful distance by shifting slightly here or there. We watch historic events on TV — and big games and dopey sitcoms. We eat overdone popcorn and underdone Pop-Tarts, and crumbs from everything snow down into the crevices. Along with pocket change and car keys and the loosely held litter of everydayness.

When we finally move out on our own — vowing to not get tied down, to roam far and wide — often the first piece of furniture we buy is a big old heavy lunking couch.

And it becomes our Sisyphean rock that we wrestle up and down the apartment-steps of our lives. Friends help us lug it in. They sleep on it during vacations and bad times and before they become NBA sensations. We sleep on it when we're tired or troubled or just too lazy to make it to the bed.

It's been that way for centuries.

These days, all sorts of sofas and couches are available. Furniture companies such as Bassett, The Sofa Company and Ikea offer a vast array of variations. On the Internet you can find sofas made of soda cans and couches composed of cacti and all sorts of material, including backpacks, grass, giant cables and FedEx boxes.

And, of course, there are sofas that unfurl into sofa beds. Not everyone is a fan. "The unfolding of a sofa bed is a display of pettiness, as in petit bourgeois," wrote Henry Allen in The Washington Post some 15 years ago. "Your house is too small, your relatives are too cheap to stay in a motel, and most of all, you are irredeemably middle class — always trying to turn squalid smallness into a combination of the tasteful and the grand and achieving only the nice. Rich people have spare bedrooms and ancient button-tufted things called daybeds. Poor people can't afford sofa beds. And so the sofa bed is the totem of the lumpen middle class."

For many Americans, however, hopping from sofa to sofa — couch-surfing — is the only way to travel. The practice has long been a frugal, and authentic, meanderer's mainstay. Now it's codified as a website and a lifestyle.

The best sofa you ever had was, um, which one? Was it light, dark, long, medium, foldout, deep-seated, leather, pleather, plaid, paisley, wine-stained, chili-stained or adorned with pet hair?

"Considering the meaning of my couch to my life — it's my workplace, my leisure spot and, during my worst bouts of insomnia, my place of overnight rest — you'd think I would've spent more than 15 minutes picking it out," says sportswriter Norman Chad whose comical Couch Slouch column appears in The Washington Post and elsewhere.

Sofastry: A Concise History Of Couches

The earliest known sofa, according to a brief history on the SofaSofa website, has been traced to Egypt, circa 2000 B.C. Majestic benches were fashioned for pharaohs. "As communities moved away from a nomadic existence where they often pack up and move at short notice," the site observes, "the sofa comes to represent a settled life of permanence, safety and comfort."

"American sofas begin to appear early in the 18th century," explains Oscar P. Fitzgerald, author of Three Centuries of American Furniture. "By the Victorian Period — around 1850 — they were part of seven-piece parlor sets which included also a man's chair, a lady's chair and four side chairs."

In the 20th century, Fitzgerald says, "the formal parlor began to disappear and entertaining became more informal. With the Depression, it became difficult to market parlor sets so furniture began to be marketed individually."

In the 1930s, the sectional sofa was developed by Donald Deskey and Gilbert Rohde, Fitzgerald says. In the '60s, sofas were made from chunks of foam covered with upholstery, which allowed for endless biomorphic and geometric shapes.

Eventually, sofas became more affordable. Today they can be bought in all kinds of stores. Certain companies let you build your own, mixing and matching size, style and upholstery. However, some assembly — and deciphering of instructions — may be required.

Chad remembers a friend helping him select his Ur couch in 2004. The couch was "shockingly red," he says, "which she insisted was the proper choice because it would bring color to my otherwise dreary home life." He was between marriages at the time.

"It's not as plush as I would like — for laying down purposes," Chad explains, "but it's mine. I watch way too much TV from there, I usually work on my laptop from there and I drink wine from there. Without a couch, I'd probably still be stuck on one of my old beanbag chairs."

Benjamin Parzybok, on the other hand, has a surfeit of sofas. Author of the novel Couch, the Portland resident says he is couch-sitting a whole cache of couches for other people. "At the moment there's a perfect storm of couch storage," he says. "There's our main couch in the living room, a behemoth of a green thing with elephantine legs that was purchased in a secondhand shop, already well-loved and destined to continue to be well-loved for some time. One floor below are a number of other couches, belonging to brothers and neighbors whose houses are getting remodeled."

One of his favorites is "a raggedy orange thing, falling apart just like the couch in the book, that I cannot bear to part with any more," Parzybok says. "It's here that the young kids do their gymnastics, experimentally vaulting across them or launching themselves at each other in fits of glee."

Couches are portals to our past, talismans of times — light and lonely — gone by. But what will sofas mean to us tomorrow? As we rely less on hardware and more on cloudware, will we even have sofas in the future?

Oh yes, says Oscar P. Fitzgerald, author of Three Centuries of American Furniture. We will be able to create our own sofas — the way we are designing our own T-shirts and credit cards. "The true wave of the future may be in stereolithography," Fitzgerald says, referring to a three-dimensional computer-modeling technique.

If you have enough money, say $50,000, Fitzgerald says, a company such as Materialise in Leuven, Belgium, may eventually be able take your model — crafted on a computer — and swiftly fashion a full-size prototype.

Hmm. 50 grand. No sweat. You probably have that much in change buried somewhere under the cushions.