Accessibility links
At Last, They See: E-Books 'Democratize' Publishing Not known as a hotbed of experimentation, the world of publishing has been slow to embrace the transition from print to digital. But in New York this past week, the publishers who gathered were more interested in exploring new ideas than arguing about the death of books. 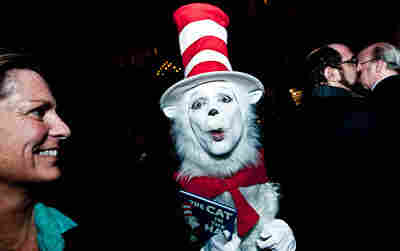 The Cat In The Hat makes an appearance at a party during the Tools of Change 2012 conference in New York last week. Pinar Ozger/O'Reilly Conferences/Flickr hide caption

Not known as a hotbed of experimentation, the world of publishing has been slow to embrace the transition from print to e-books. This past week in New York, however, the Tools of Change digital publishing conference attracted entrepreneurs and innovators who are more excited by, rather than afraid of, the future.

It was the kind of crowd where some were more inclined to say "Steal my book!" than to argue over what that e-book should cost. These are people who see digital publishing not as a threat, but as an opportunity.

Joe Wikert of O'Reilly Media, which hosted the conference, says digital publishing is in its infancy but the potential is endless.

"If you come up with something new and exciting, you can change the playing field overnight," Wikert says.

Mark Coker is the founder of Smashwords, an e-book publishing and distribution platform that he introduced for the first time at this same conference four years ago.

"We make it really easy for any writer anywhere in the world to instantly publish any book," Coker says.

In its first year, Smashwords published 400 books, but that quickly increased to more than 100,000. The company's biggest competitor is the behemoth Amazon. That doesn't scare Coker, because he distributes Smashwords' books to any other e-book retailer that wants them. A writer himself, Coker believes the power base in publishing is shifting.

"The power to create great books and the power to distribute great books is transferring to the author," he says. "Just a few years ago, publishers controlled the printing press and they controlled access to retail distribution. So if you couldn't get your book printed and you couldn't get it distributed, you'd never reach readers. But today, the printing press is completely democratized."

Smashwords doesn't edit or curate its books, and Coker says the readers should decide which books will rise to the top and which will fail. And in the brave new world of digital publishing, Coker says, a book is a constant work in progress.

"In the old days, in the print-book days, books were relatively static objects. The publisher would wrap up the book, ship it out and that book would rarely change," he says. "But with e-books, they're these dynamic creatures. Authors have the ability to change anything about the book at any time."

Why wait until a book is finished to find out what readers are thinking? Dominque Raccah, CEO and publisher of Sourcebooks, is experimenting with the "agile publishing" model — which allows authors and readers to interact as the book is still being written.

"You really are publishing into a community already," Raccah says. "So what you are going to be doing is developing that book in front of that community, having the community interact with the author to develop the book [and] provide feedback."

A lot of the digital publishing experiments that are getting under way today may not be here a few years from now, but Raccah says the experimentation is key to learning what will and won't work in the future.

Peter Meyers, author of Breaking the Page: Transforming Books and the Reading Experience, says when the dust settles, the book as we know it might be different. Digital enhancements may even make the book smarter, but the experience of reading will be fundamentally the same.

"Once we get through the next couple of years of mania, and that's where we are at ... people will take a deep breath and say, 'Ok, the book is not dying,'" Meyers says. "Is the print book diminishing in its presence? Of course, but the function of the book itself as a break and a refuge and a chance to spend immersive time with an author telling a story, I think is incredibly valuable."

Whatever the future may hold, Raccah says the present is a great time to be in the business of publishing.

"I really feel tremendously blessed that we all get to have this conversation about what the book can be in the future," she says. "What does it mean? How does it work? How do we expand the boundaries of the book? This is a conversation worth living for."

Raccah says when she first got involved in digital publishing she thought she would be developing products for her children's generation. She was wrong about that; the future, as it turns out, is now.