Accessibility links
Syrian Violence Choking Off Opposition's Supplies Activists say hundreds of Syrians, perhaps more than a thousand, have been killed in President Bashar al-Assad's brutal offensive. The situation may be about to get worse; food and medical supplies are growing short as the violence mounts. 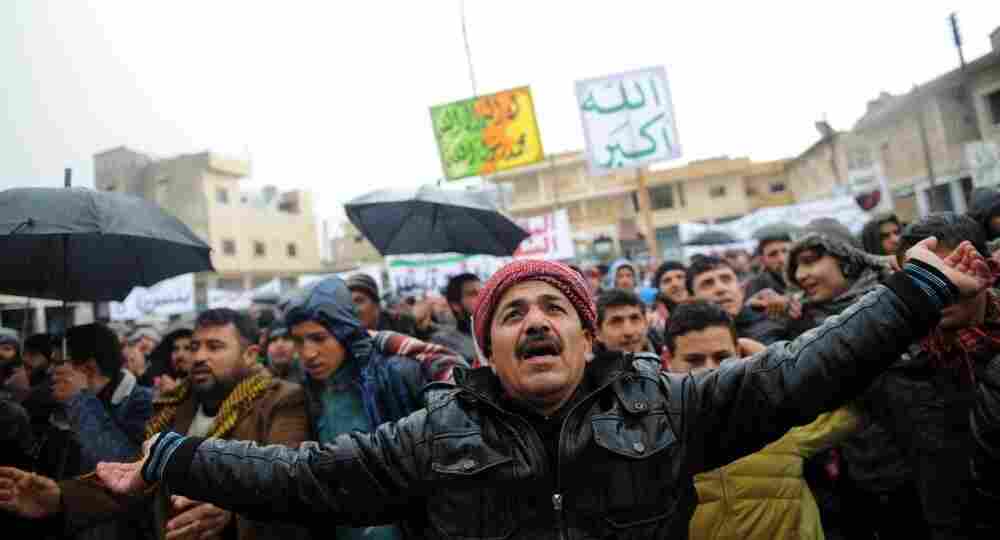 Syrians demonstrate against the regime after Friday prayers in the north Syrian city of Idlib on Friday. Thousands of Syrians rallied to demand Bashar al-Assad's ouster, as the embattled president's forces unleashed their heaviest pounding yet of Homs in a brutal bid to crush dissent, monitors said. Bulent Kilic /AFP/Getty Images hide caption 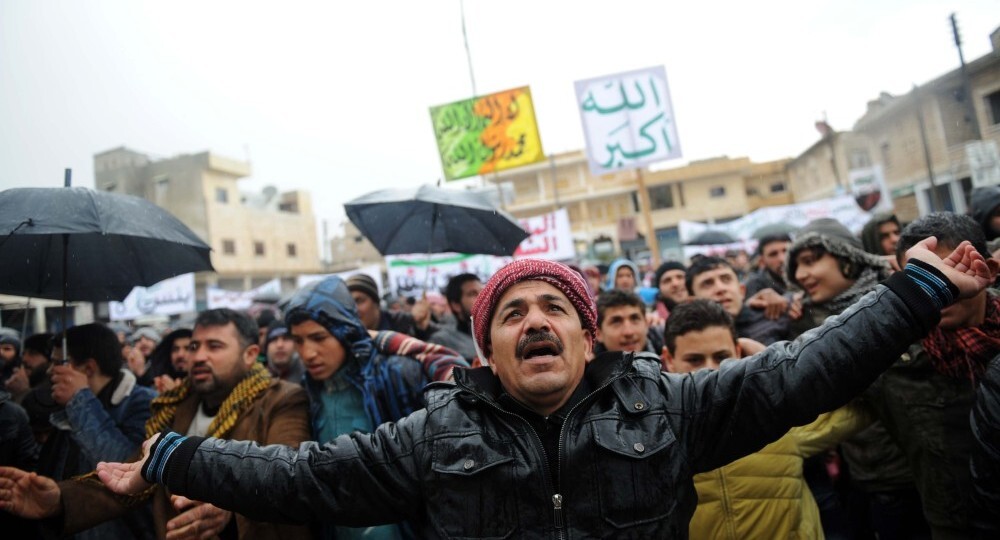 Syrians demonstrate against the regime after Friday prayers in the north Syrian city of Idlib on Friday. Thousands of Syrians rallied to demand Bashar al-Assad's ouster, as the embattled president's forces unleashed their heaviest pounding yet of Homs in a brutal bid to crush dissent, monitors said.

It's been two weeks since the United Nations Security Council failed to pass a resolution condemning the Syrian regime for its crackdown on protesters and calling for Syrian President Bashar al-Assad to step down. Since then, the Assad regime has intensified a brutal offensive on cities and neighborhoods that have most fiercely resisted the regime.

Activists say hundreds of people, perhaps more than a thousand — most of them civilians — have been killed. The situation may be about to get worse; the opposition's food and medical supplies are growing short as the violence mounts.

Assad's offensive started on the city of Homs, where neighborhoods that have seen some of the largest protests and armed resistance to the government are now under constant fire from tanks, rockets and mortars.

Homs is in central Syria, and it's thought that if the regime lost it to the opposition, that would cut the country in half. The offensive continued in the city of Zabadani, a mountain resort town just outside of Syria's capital of Damascus.

A Battle For Control Of A City

For a while, the citizens and defected soldiers who'd taken up arms were in control of Zabadani. Like in Homs, the group fights under the name the Free Syrian Army. The protests in Zabadani swelled into the thousands.

That all changed when the Syrian army began pounding the city with shells, mortars and rockets.

Shaking, smoking and clearly traumatized, a man who goes by the name Marcel says Zabadani is under a kind of Stalingrad siege. As in Homs, he says, electricity, phones and water have been cut off.

"We don't have food supplies, we don't have medical supplies. We don't have field hospitals left," Marcel says. "The whole infrastructure is damaged. I'm calling people to act."

Wissam Tarif is an Arab world campaigner with Avaaz, an organization trying to smuggle medical supplies into places like Zabadani. He says the army's objective is simple: to bring enough hurt on the civilians in these cities that they will stop protesting and stop supporting the Free Syrian Army.

"The army objective is to make residents and any militarized group — the Free Syrian Army — to surrender with white sheets," he says.

The thing is, Tarif says, the offensive by President al-Assad's army is accomplishing just the opposite.

"This regime has done everything; turned life into horror and people did not surrender," he says. "They will not, no matter what al-Assad does. This is going to continue. We should ask ourselves: What can we do to stand with these people?"

How Much Worse Will It Get?

While the horrors on the ground are amounting to a humanitarian crisis, Yezid Sayigh of the Carnegie Middle East Center says things could actually be much worse. Back in 1982, the Syrian regime put down an uprising by killing what some believe are tens of thousands of people in the city of Hama.

Sayigh, who is an expert in Arab militaries, says the regime could not get away with such violence now in the Internet age. But there's another reason the army is hesitant to launch a major ground or air offensive.

"By conducting massive operations on that scale, then this could tip the balance within the army and provoke the defection of large numbers of soldiers," he says. "And even of officers, and even the defection of entire battalions or brigades. And that would then trigger a cascade of defections which could destroy the armed force of the regime."

Still, Sayigh says it's possible the Syrian regime could escalate its offensive and enter an even more violent stage.

"Should it feel that its position is slipping, then I imagine that it will launch something far more aggressive," he says. "That, I think, will be a signal for us that the regime is, in fact, getting desperate."

In the city of Homs, activists in the hardest-hit neighborhood, Bab Amr, say that food is running out and supplies might not last through the coming week.