Accessibility links
Female Candidate Battles Machismo In Mexico On the campaign trail, Josefina Vazquez Mota avoids marketing herself as a presidential candidate specifically for women. One expert says the nomination shows change, but that's not Vazquez Mota's only challenge. 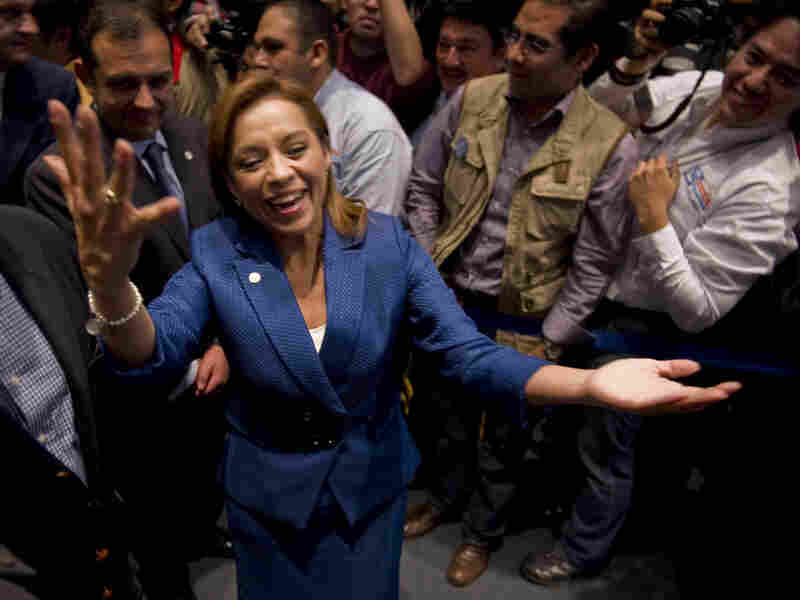 Josefina Vazquez Mota celebrates her selection as the presidential candidate of the National Action Party in Mexico City on Feb. 5. She's the first woman to run for president in Mexico on a major party ticket. Alfredo Estrella/AFP/Getty Images hide caption 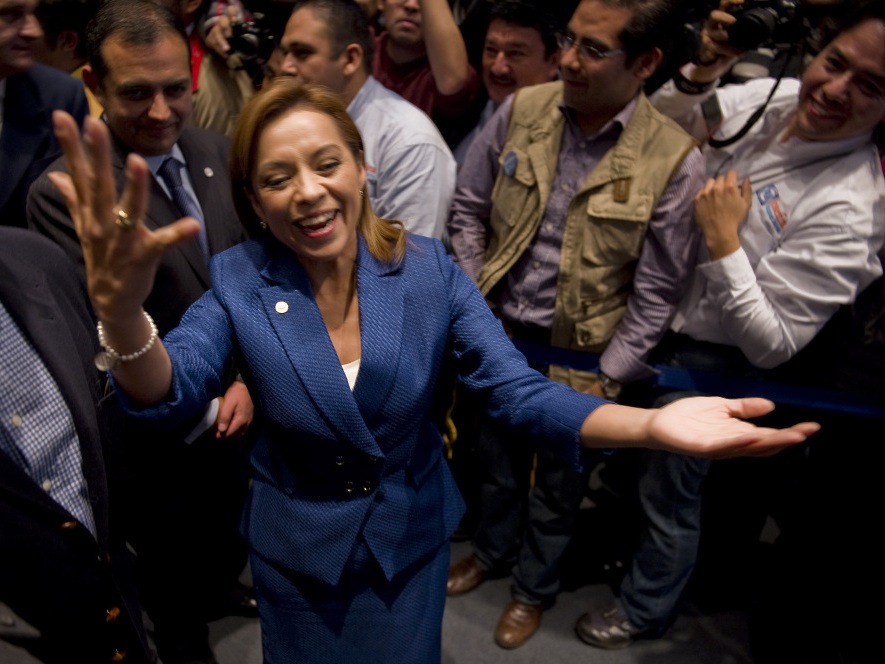 Josefina Vazquez Mota celebrates her selection as the presidential candidate of the National Action Party in Mexico City on Feb. 5. She's the first woman to run for president in Mexico on a major party ticket.

Earlier this month, the National Action Party of Mexico nominated the country's first ever female presidential candidate, economist Josefina Vazquez Mota. As Vazquez Mota accepted the nomination, she vowed to be the first woman to become the Mexican head of state.

The PAN, as the conservative party is known in Spanish, is Mexico's current ruling party. It has also put forth a woman, Isabel Miranda de Wallace, in Mexico City's mayoral race. Both elections take place on July 1.

The 51-year-old Vazquez Mota is a trained economist, devout Catholic and mother of three girls. She jumped onto the national stage in 2000 when then-President Vicente Fox appointed her as the first female secretary of social development. Later she served as education minister for President Felipe Calderon.

Current polls show Vazquez Mota in second place, behind the former governor of Mexico state, Enrique Pena Nieto. Pena Nieto is on the ballot for the center-left Institutional Revolutionary Party, or PRI. The PRI ruled Mexico for much of the 20th century — a reign called "the perfect dictatorship" — but lost its grip in the 2000 elections. On the left is Andres Manual Lopez Obrador, the 2006 runner-up to Calderon.

On the campaign trail, Vazquez Mota embraces that she's a woman and mother, though she avoids marketing herself as a candidate specifically for women. Earlier this month, her rival Pena Nieto said he didn't know the price of tortillas because he was not "the woman of the house." Vazquez Mota's response? She has raised children and kept the fridge stocked, she says — all while running the federal social services agency.

Jose Antonio Crespo, a political analyst in Mexico City, was surprised when the PAN elected a woman as its lead candidate. Because the PAN is a conservative party, he says, people thought it wouldn't nominate a woman. Machismo is still an issue in Mexico, and some polls show that there are some Mexicans who refuse to vote for a female leader. But it's a small part of the electorate, says Crespo, and Vazquez Mota's nomination clearly demonstrates willingness to embrace a woman.

Crespo says Vazquez Mota's biggest problem is that her policies are similar to those of the past two PAN presidents. She has pledged to continue Calderon's deadly offensive against Mexican drug cartels, and she also says uncovering corruption and government impunity would be top priorities for her administration.

That's a line the PAN has repeated as it has been in power for the past 12 years. But Crespo says there's a perception that the PAN governments haven't accomplished anything. Vazquez Mota's biggest challenge isn't getting Mexicans to vote for a woman, Crespo says. It's getting Mexicans to believe she can solve the huge problems facing the country.