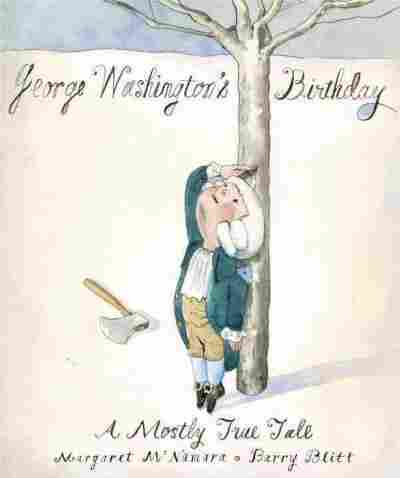 by Margaret McNamara and Barry Blitt

Through his many New Yorker covers, Barry Blitt has become one of the pre-eminent satirical cartoonists of America's recent presidents. He is probably best known for his controversial 2008 cover of Michelle and Barack Obama, dressed as a Muslim and a militant with an AK-47, fist-bumping in the Oval Office.

Other famous covers include his 2005 depiction of President George W. Bush and Cabinet partially submerged in Hurricane Katrina floodwaters and a 2010 illustration of President Obama trying unsuccessfully to walk on water.

Now Blitt has trained his eye and pen on the nation's first president in a new children's book, George Washington's Birthday. The book, written by Margaret McNamara and illustrated by Blitt, follows young George about his normal day: chopping down a cherry tree, fording a creek — and worrying that his family has forgotten his 7th birthday.

Why George Washington at 7?

"It's a nice age to look at George Washington. He bears no resemblance to the severe and great man that we know him as, and he's young and he wants people to recognize his birthday. ... And he learns some important lessons on dwelling on stuff like that."

"The genesis of the idea basically was that the art director was calling me at the last minute, asking me if I had any ideas — political ideas but also to keep in mind that it was Super Bowl week. And Gingrich and Romney were beating each other up then. Remember when it was a two-man race? It just seemed to make sense to put them on the screen. I think first the idea was just them on a football field tackling each other, beating the crap out of each other, and then it seemed like a funny idea to move and pull back and have Obama watching the game and smiling at his good fortune, at his team winning — or his team ahead, in any case." 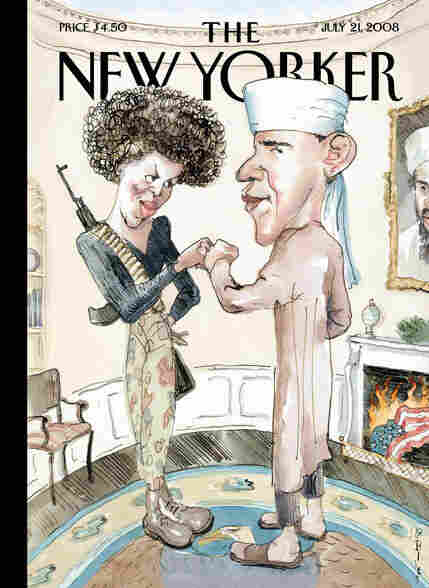 Barry Blitt's controversial "Politics of Fear" ran on the cover of The New Yorker in July 2008. "It was obviously taking a chance," Blitt says. Courtesy The New Yorker hide caption

On his controversial 2008 cover of the Obamas

"Anytime I produce a cover, I always regret it afterward. Sort of agreed with [the critics]. Even to this day, I'm not sure if that was the worst thing I have ever done — I know it wasn't the best thing I've ever done — but I am still ambivalent about it. It was obviously taking a chance — the intention going in was trying something different and something interesting. I mean, there was all this stuff in the ether. On the radio waves and on Fox and everywhere you went, you heard the descriptions of this guy — of the president being a 'secret terrorist Muslim.' It just seemed funny to draw it all out, to put it all on a piece of paper."

On the reactions to the 2008 cover of the Obamas

"The magazine comes out on a Monday, but it leaked to the press on Sunday evening. So Sunday evening, I immediately started to get a lot of emails ... from very, very angry people. And my reaction was to try to answer all of them. So I would answer each email personally, saying, 'I don't know. This is obviously satire. Look at the ridiculousness of it. This isn't how I feel, and no one can take this seriously.' And then there were thousands of emails and I couldn't answer all of them. My reaction was kind of horrified on Monday and Tuesday. My mom called me screaming, 'What did you do?' But the tide changed by the middle of that week, and I have been living a normal life since then."

On the editorial process of pitching covers to The New Yorker

"I think they are looking for good ideas. ... The art editor sends out a calendar to a regular stable of artists who contribute covers and illustrations. It'll have dates on it — it'll say Valentine's Day is still open, or Purim — and then people will send in ideas for those days, and they are always open to topical covers. Sometimes I will get a phone call — and I imagine other people get them, too, at the same time — saying, 'It would be great to do something about Santorum rising in the polls,' say, or something. And then you send stuff in.

"As it comes to press the week before, it comes down to doing it the Thursday of the week, and if [the cover is] decided on the Wednesday, you really have to scramble to put something down on paper. And that sort of thing does suit me because I'll just redraw things a million times — I'm never done. I'll draw it once and think I can do a better job of it and go back to the first one, and then start a third one. So it's nice to have someone come and take it away from me. Usually a courier is sent and waits outside the door, and they just pull it away from me."