Accessibility links
As Bear Population Grows, More States Look At Hunts Wildlife officials don't usually base hunting policy on the public's view about an animal. But the black bear seems to be different — it has bounced back from near-extinction to being a nuisance in some areas. Now the question is, would people rather live with bears, or keep their numbers in check? 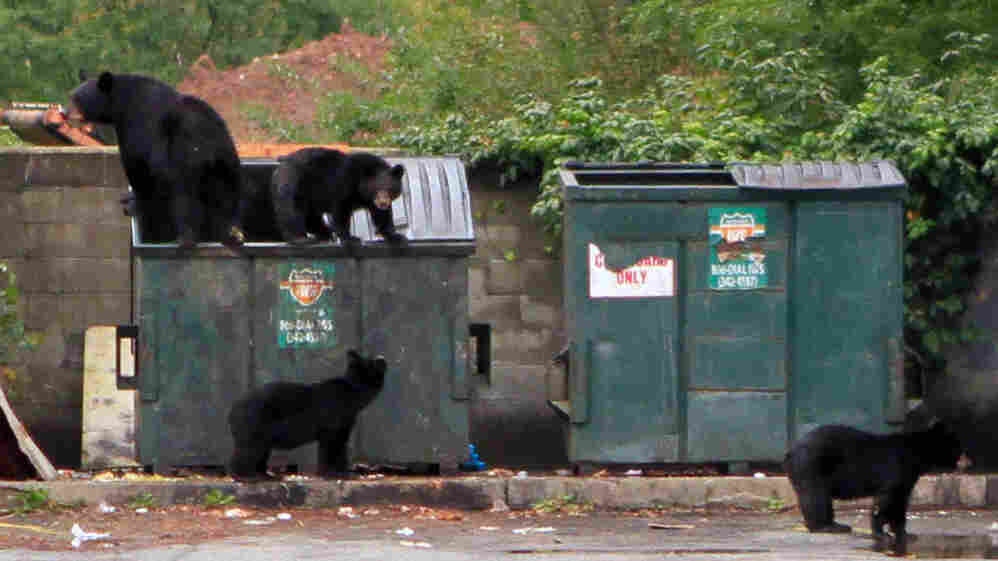 A family of bears investigates a Dumpster behind a diner in Pomona, N.Y., last fall. Black bears are becoming more common in populated areas around the United States. Eddy Philippe/AP hide caption

Wildlife officials don't usually base hunting policies on how the public feels about an animal. But the black bear seems to be different. The revered king of the forest has bounced back from near-extinction to being a nuisance in some areas. Some states are trying to figure out if residents can live in peace with bears, or if they'd rather have hunters keep numbers in check.

In places like the Smoky Mountains, black bears have always been part of the landscape.

These days, visitors like Elizabeth Bryant of Ohio shoot video of encounters with bears. In one video, a trio of truly adorable cubs explores the back porch of a mountainside cabin while the Bryant family watches through a sliding door. As you can hear someone say in her footage, "It's so awesome."

But national parks are no longer the only places humans are running into black bears. Numbers from the Eastern seaboard to California have shot up in recent decades.

Tennessee, for instance, now has an estimated population between 4,000 and 5,000, up from a few hundred in the 1970s. The relatively shy creatures have sauntered into areas where they are less welcome.

"We are receiving complaints from the public that say they don't want the bears there, that we need to do something to get rid of them," says Daryl Ratajczak, the chief of wildlife for the state agency that oversees hunting. "And we understand their feelings."

Ratajczak says that, being highly adaptable, bears will continue to spread if left unchecked.

"Given enough time, bears will soon be found all throughout the state of Tennessee," he says. "And we need to determine whether or not the general public wants that."

Other nearby states of Virginia, West Virginia and even Maryland also have been gauging public tolerance of the black bear.

Like Tennessee, they've used telephone surveys through a company called Responsive Management. Founder Mark Damian Duda says there is still enough habitat for bears to survive. But his survey-takers are seeing if states have hit what he calls a "cultural carrying capacity."

"There's really biological carrying capacity — the number of bears that the land can support — versus how many bears are acceptable to people," he says. "And sometimes those are different."

Duda says black bears, while smaller than other species, are still viewed as dangerous, perhaps for good reason. There have been fatal attacks. But he says society is also protective of bears.

"While the public supports hunting in general," he says, "hunting black bears is still supported but not as strong as maybe hunting for deer or other species."

Controversy has come to states that are expanding hunting of black bears. Animal rights activists tried using the courts to block a weeklong hunt in New Jersey. In December, they confronted sportsmen as they checked in their kills.

Part of the opposition is related to the method of bear hunting, which historically depends on a pack of dogs.

On a recent hunt in Polk County, Tenn., where some bear hunting is already allowed each year, a nervous-looking bear has been chased 30 feet into a tree. More could soon be running for their lives. And conservationists aren't necessarily standing in the way.

Black bears have begun showing up in Ron Castle's neck of the Tennessee woods, which he helped to preserve. But he recognizes how much habitat his new neighbors need to survive.

"Hunting would be more humane than allowing the bears to destroy their habitat and have their population collapse," he says.

At this point, though, the concern is more about the human population — and whether people will put up with black bears in their backyards.