Accessibility links
Russian Accuses Voice Of America Of Fake Interview Anti-corruption crusader Alexei Navalny has been the victim of many dirty tricks by pro-Kremlin media. But when Voice of America published an online interview that had him criticizing other Russian opposition figures, Navalny quickly tweeted that the interview was a fake. The VOA's response: "We may have been scammed." 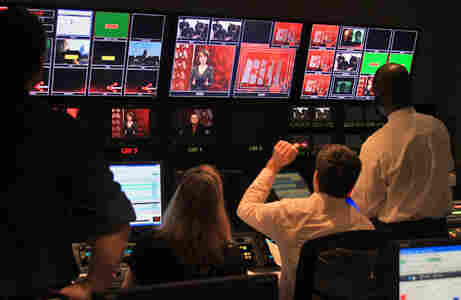 Voice of America was criticized after the veracity of its interview with a Russian anti-corruption activist was questioned. In this photo provided by the network, a control room is seen during a Russian-language Web show. Voice of America hide caption

NPR's Michele Kelemen is a former employee of Voice of America.

Russian anti-corruption crusader Alexei Navalny has been the victim of many dirty tricks by pro-Kremlin media.

But when the U.S. government-funded Voice of America published an online interview that had him criticizing other Russian opposition figures, Navalny quickly tweeted that the interview was a fake.

"It seems the VOA has gone nuts," he wrote to his Twitter followers.

VOA director David Ensor apologized for the incident and said the Russian service has tightened its procedures.

"But you know in the digital age, it is increasingly difficult sometimes to know who it is you are in contact with," he says. "And in Russia, there are a number of entities — including some connected with the Kremlin — that make a business of trying to confuse the image of people like Mr. Navalny, by impersonating him and doing various things. So we may have been scammed, but we may never know for sure."

Navalny wouldn't comment for this story. Ensor says VOA journalists have made their peace with him.

"One of our stringers reached Mr. Navalny at a demonstration and said, 'Look, we are really sorry if we got it wrong. Did we get it wrong?' " Ensor says. "And he said, 'Hey don't mention it; don't worry about it; there's a lot of stuff going on around here.' "

But others don't see this as an isolated incident. Former VOA employee Ted Lipien says the Russian service now relies on contractors, who aren't familiar with American journalistic values.

"And I'm not saying that one should not hire people with fresh knowledge of countries like Russia," Lipien says. "But if you are the Voice of America, you also need seasoned editors with other experience — American experience."

In one webcast, for instance, the VOA host hardly pushes back in a lengthy interview with a pro-Putin youth leader, who complains that the U.S. is trying to foment revolution in his country.

Ensor says journalists are just trying to be balanced and credible

Outside reviews of VOA's Russian service have raised concerns. A Senate staffer familiar with them says the reviews mostly call on VOA to provide more coverage of corruption and human rights. But the staffer says there is "no smoking gun" to indicate a deliberate pro-Putin bias.

There's another problem, says Lipien, who co-founded the Committee for U.S. International Broadcasting.

"Russian service has no radio or television programs, so their audience in Russia is minuscule because of that," he says.

VOA says it's getting more hits than ever on its website and has a growing Twitter following of 30,000. It's also starting an interactive social media show, despite its shrinking budget.