Accessibility links
Portugal Plays By The Rules, But Economy Slumps The eurozone crisis has focused attention on debt-burdened Greece. Meanwhile, Portugal is seen as the international creditors' poster-child for obediently slashing spending and welfare benefits. But Portugal's national debt continues to grow, and it's mired in recession and unemployment. 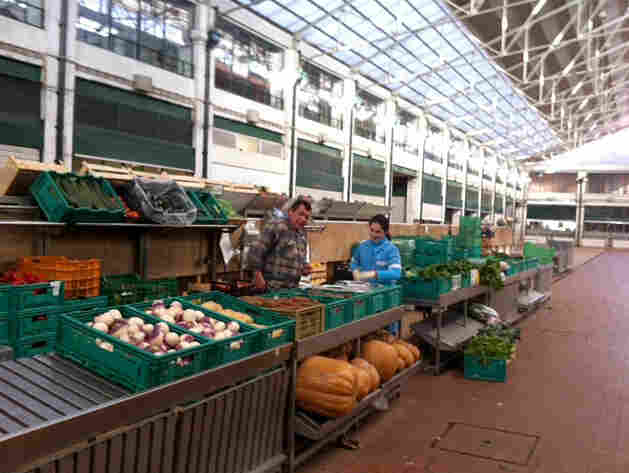 A once-bustling vegetable market in Lisbon is now beyond the reach of many Portuguese — a sign of their country's economic problems. Sylvia Poggioli/NPR hide caption 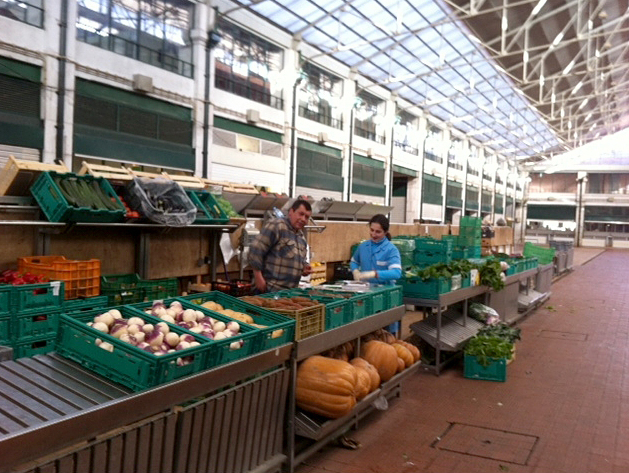 A once-bustling vegetable market in Lisbon is now beyond the reach of many Portuguese — a sign of their country's economic problems.

The eurozone crisis has focused attention on debt-burdened Greece spiraling into decline. Meanwhile, Portugal is seen as the international creditors' poster-child for obediently slashing spending and welfare benefits.

Nevertheless, the Portuguese national debt continues to grow, and the country is mired in recession and soaring unemployment.

The Portuguese national character has long been identified with Fado music. Raquel Freire, an activist with the local Occupy movement, says the melancholy style helps explain decades of resignation.

"Fado was saying, we have a destiny — we are poor and humble," she says. "It is our tragic destiny, we cannot do anything against it."

But after months of deep budget cuts and tax hikes, Portuguese are beginning to react. A protest rally was organized by the largest trade union on Feb. 11, and the slogans echoed its leftist ideology.

Analysts were surprised by the huge turnout, the biggest in 30 years. People of all ages and professions vented their anger and impatience.

Costume designer Tania Marques, 33, says that times are so bad that she's thinking of going back to live with her parents in northern Portugal

"This is hitting the bottom line, this is too much," she says. "I have to stop dreaming and readjust my life."

Antonio Nabarrete, a 56-year-old schoolteacher, says the government has slashed his salary by 28 percent.

"We lost our salaries and you have young without employment, and you have old people without money," he says. "And so there is no future for a country like that."

Last May, Portugal received a $104 billion bailout from the European Union and International Monetary Fund, in exchange for deep spending cuts and structural reforms. 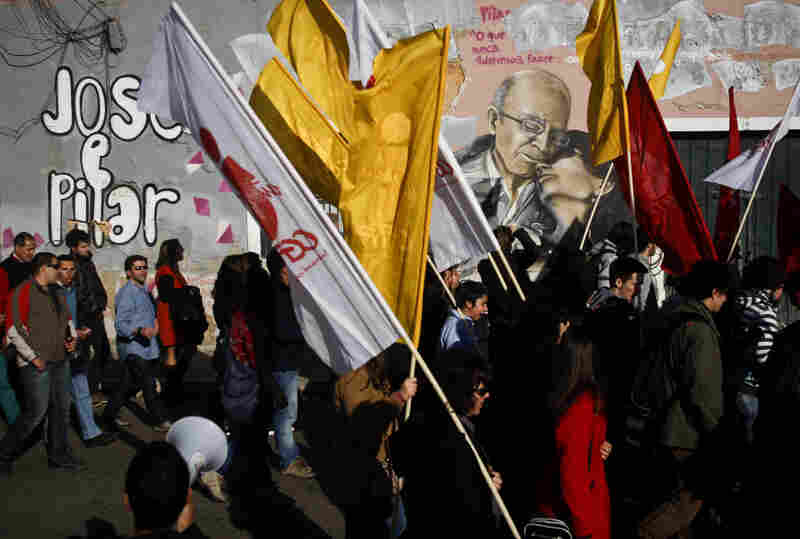 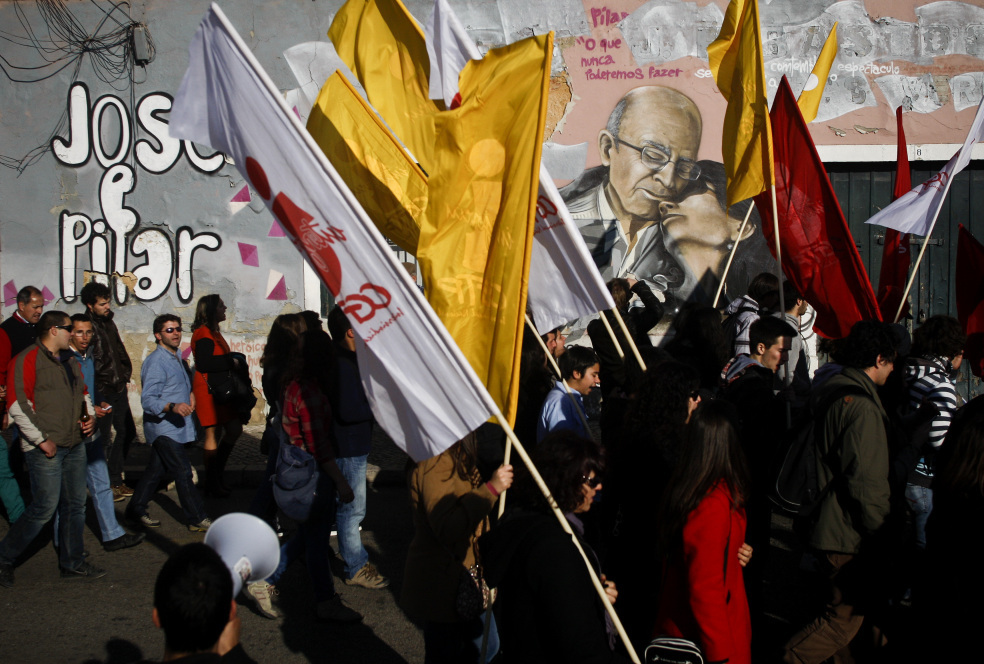 Workers wave flags and march in front of a Jose Saramago and Pilar del Rio graffiti tribute, in a recent protest against government austerity measures.

While the budget deficit was cut by more than a third, the economy is rapidly shrinking, consumption has plummeted, and unemployment has soared to 14 percent. Among the young, it reaches 30 percent.

On the streets of Lisbon, the signs of crisis are everywhere: shuttered shops; homeless people sleeping in doorways; and more and more people begging.

One of the most striking images is near-empty vegetable markets that have become out of reach for the average family. After a decade of easy credit, Portuguese are scrambling to make ends meet.

At one table, Anna Claudia, 42, displays dusty old objects she collects from friends. A single mother, she lost her job at a mobile phone company two years ago.

Unlike Greece, Portugal enjoys EU political support that Athens can only dream about. And yet, both countries' debt is rising. And this year, Portugal's economy will shrink as much as Greece's.

More and more Portuguese worry they're going to follow in Greece's footsteps.

Fears Of A Downward Spiral

"We have all reasons to fear that we may enter this debt cycle of Greece," says Guerreiro, "which is: Austerity brings more recession, which brings austerity that brings more austerity — and then you are eating your babies and your sons."

"You are suiciding the most studied, most capable, the most well-prepared generation that ever existed in our country," Freire says. "All my friends are working in supermarkets, and they studied law, economics.

Like neighboring Spain and Greece, Portugal came out of a dictatorship less than 40 years ago.

And, as in the other countries, the first generation to grow up and be educated in a fully democratic system is paying the highest price for the eurozone crisis.