Accessibility links
Bailout Talks Reopen Wounds In One Greek Village The protracted negotiations have brought up dark memories, especially between Greece and Germany. In the central town of Distomo, site of a Nazi massacre in 1944, the past is still painfully vivid but there's hope for a European future. 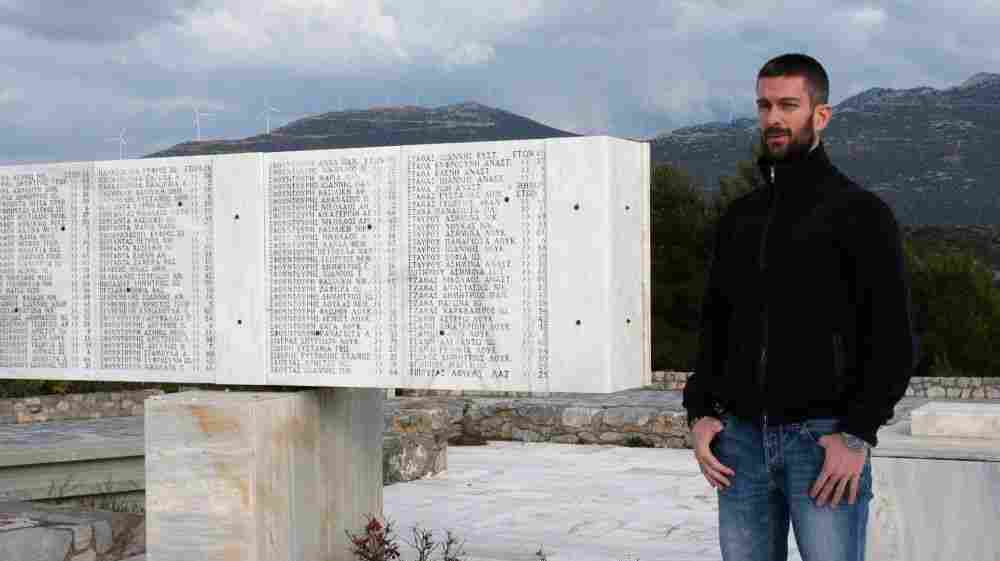 Nikos Bouras, 37, stands next to a monument for those massacred by the Nazis on June 10, 1944, that stands atop the highest hill in the Greek town of Distomo. Joanna Kakissis/NPR hide caption

Europe is still a continent that looks over its shoulder at a long and sometimes dark past. That extends even to the protracted Greek bailout negotiations, where Germany's dominant role has scratched at some historical wounds.

Panagiotis Sfountouris, 74, says he'll never forget that day. He was just 6 years old when he and his younger sister escaped death by hiding in a relative's basement. When they returned home, they found their parents shot dead and their 2-year-old brother gutted by a bayonet.

"I ran to the balcony and screamed, 'They've killed my father and my mother and our little Niko!' " Sfountouris recalls. "Nothing moved in Distomo, nothing at all. We saw dead people everywhere. When it started getting dark, we got scared all over again. My uncle came to get us, and we spent the night hiding in the mountains." 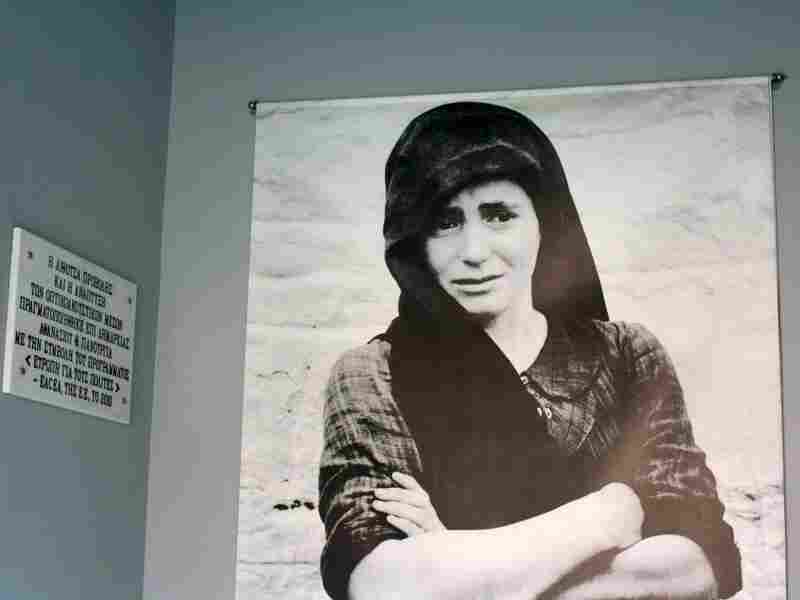 A giant photograph of a distraught young woman whose family was murdered by the Nazis in 1944 hangs in the entrance of a museum memorializing those who died in Distomo. Joanna Kakissis/NPR hide caption 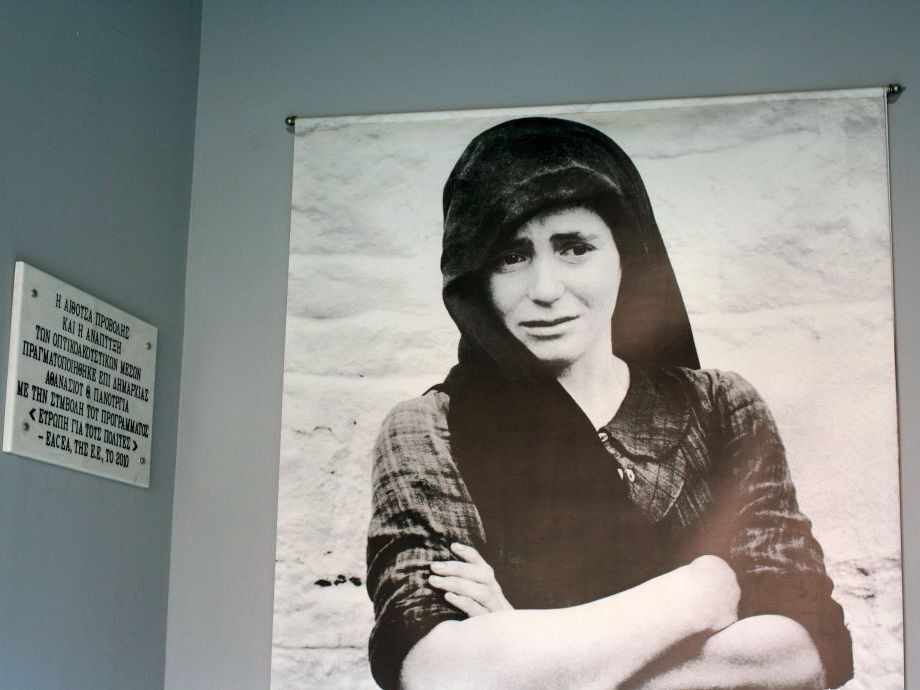 A giant photograph of a distraught young woman whose family was murdered by the Nazis in 1944 hangs in the entrance of a museum memorializing those who died in Distomo.

Sfountouris still cries when he talks about the family he lost. He now runs a gas station in Distomo and says he has to buy nearly all of his products from Germany. Many goods sold in Greece are imported from Germany, a fellow European Union country.

Sfountouris says he will never trust the Germans. "They're not going to change," he says. "I mean, can someone put on different clothes and pretend to be someone else? I just hope these people don't end up being worse."

Until the debt crisis, Greece and Germany actually had a happy relationship. Greeks studied and worked in Germany, and Germans spent summer holidays in Greece. But as austerity crippled the Greek economy and Germans wanted more belt-tightening, Greeks felt besieged.

Many residents of Distomo are open to Europe and even to Germany. But the town is mainly known for the Nazi massacre — it even took Germany to court over war reparations, though it lost. There's a monument for the dead atop its highest hill, and residents recently remodeled an old elementary school to house a new museum.

Nikos Bouras, who works at the town hall, often unlocks the museum for visitors. It's chilly inside because Distomo doesn't have money for heat, and voices echo. Near the entrance, there's a portrait of a distraught young woman whose family was murdered.

"It's a characteristic image of the time," Bouras says. "This picture was called the Distomo Mother. Her name was Maria Pandiska. This picture has gone all over the world and is part of our activism here."

Bouras, who is 37, is aware that this history molds his opinions of Germans today. He says he's concerned that the European Union, led by Germany, is robbing Greeks of their sovereignty in exchange for billions in bailout loans. 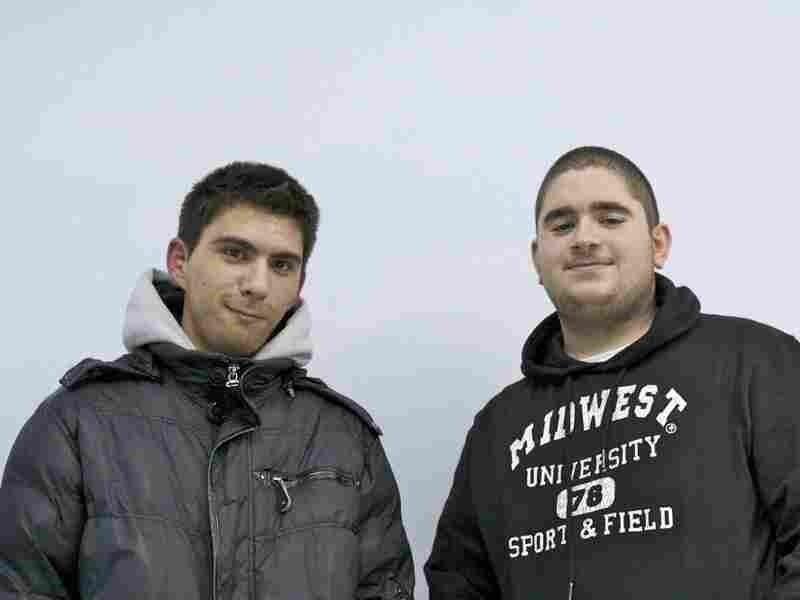 Andreas Kallermenos (left) and Vassilis Pandiskas, both 17, say they worry about their future in Greece. Joanna Kakissis/NPR hide caption 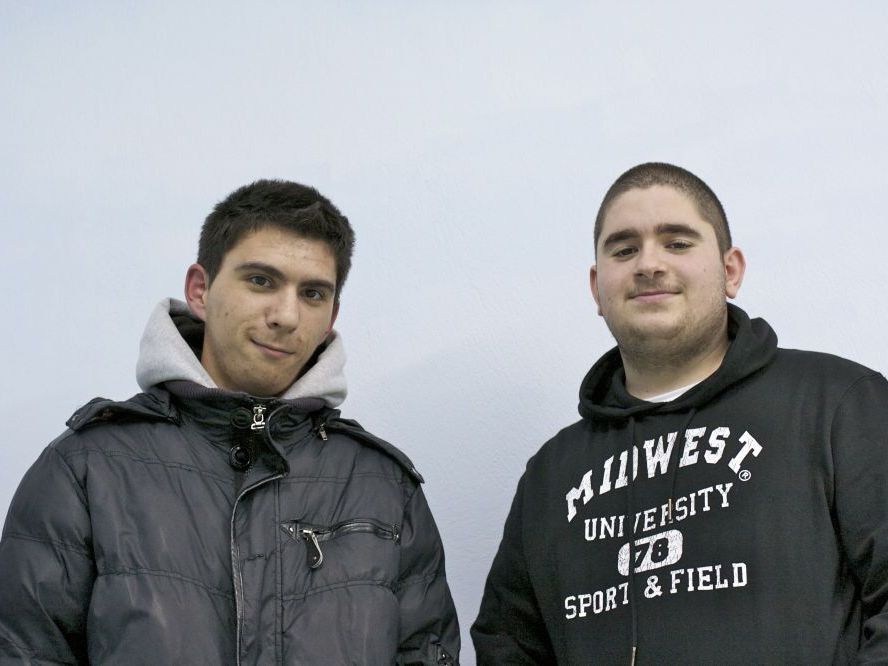 Andreas Kallermenos (left) and Vassilis Pandiskas, both 17, say they worry about their future in Greece.

This has caused him to lose faith in the euro, the EU's common currency.

"I personally don't think it would be such a disaster to go back to the drachma," he says. "I'm sure it's better than abdicating our national dignity."

Austerity measures in exchange for bailout loans have hit Distomo residents — like all Greeks — hard. Bouras' salary has been cut, and so has Sfountouris' pension.

With youth unemployment at almost 50 percent in Greece, the town's youngest residents are concerned, too.

Vassilis Pandiskas and Andreas Kallermenos, both 17, say they worry about their future in Greece because of the debt crisis and the harsh austerity measures that have stalled the economy.

"We won't have jobs, I'm sure of it," Kallermenos says.

They think Europeans look down on Greeks but that Greece nevertheless belongs in the European Union.

"The Europeans are difficult, but I don't accept that we don't belong with them," says Pandiskas, whose great aunt Maria is the woman pictured in the Distomo Mother. He says he grew up hearing gruesome stories of the Distomo massacre but that he doesn't hate Germans.

Ioanna Gamvrilli, who is also 17, wants to be a civil engineer though she fears she'll never get a job.

But she doesn't blame Germany for Greece's debt crisis. She says Greek politicians got the country into debt. She likes the Germans she has met, including a good friend named Sophie whom she met when a church group from Nuremberg came to honor the dead of Distomo a few years ago.

Gamvrilli says the past should not strangle Europe.

"We can forgive, of course," she says. "Everybody should be able to forgive. We can't forget because the past is engraved in our memory. But I want to believe that we're mature enough as Europeans to manage that past."

Doubts Linger After Late-Night Deal On Bailout For Greece Feb. 21, 2012