Accessibility links
Kitchen Window: The Secret Strength Of Beef Soup It takes a few leisurely hours to draw the magic out of meaty beef bones. Boiled at length, they produce a savory base for all sorts of soups, from borscht to pho.

The Secret Strength Of Beef Soup

The Secret Strength Of Beef Soup 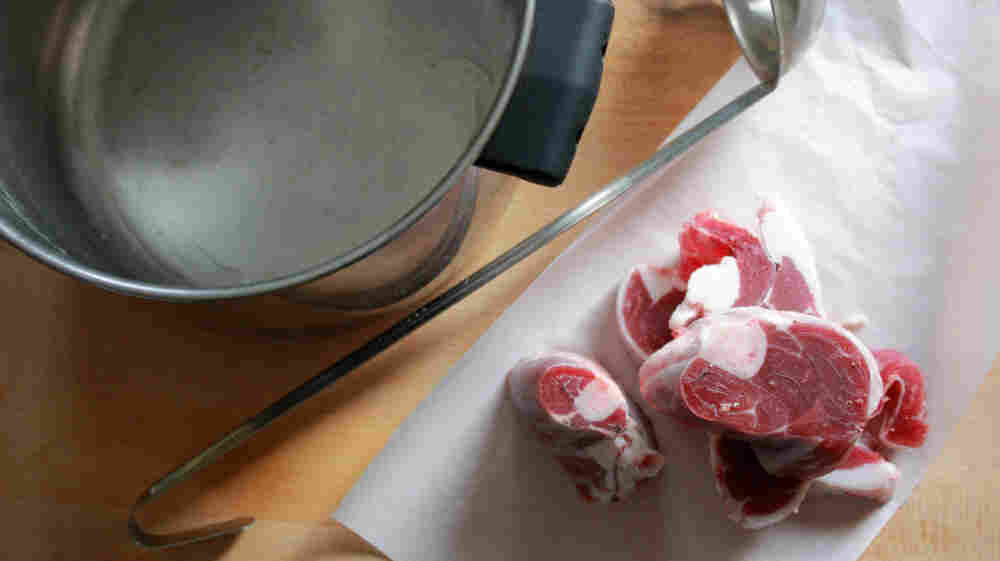 Get recipes for Midwinter Borscht, Beef And Barley Soup, and One-Day Pho.

On a dreary midwinter afternoon some years ago, I was standing in line at the supermarket checkout, my usual chaotic weekly haul heaped in tottering stacks on the belt. Behind me, a woman waited patiently, holding a small package of meat. I'm ashamed to admit it, but I am an incorrigible checkout-line spy, and I couldn't help peering a little more closely.

The package held two big, rosy chunks — thick, fresh-looking rings of meat surrounding a great pale cross-section of bone. Dog owner? Flintstones fan? After a moment, I traded the rudeness of staring for the friendlier intrusiveness of conversation, and asked her what cut of beef it was. "Shenk bun," she said, revealing an indeterminate Eastern European accent. "Ah, shank bone," I translated aloud, for my own benefit. "And what do you do with it?"

She explained that it was for soup — that you boiled it a long, long time, and put in vegetables and maybe some grains such as oats or barley. "Very, very good," she declared, hugging herself for emphasis. "Yes, I'm sure," I said, smiling, and indeed, in a flash I envisioned it — the glowing stove top, the little pot simmering away through a cold, rainy, afternoon, the aromatic steam rising up like a soft anthem of hope.

The woman with the shank bone went off to live her story, and I went off to live mine, but the idea stayed with me, returning each gray winter with its promise of comfort and sustenance. Like the world's slowest soup, it took three or four years of simmering before it was done.

T. Susan Chang regularly reviews cookbooks for The Boston Globe and NPR.org and the cookbook indexing website Eat Your Books. Her first book, A Spoonful of Promises: Recipes and Stories from a Well-Tempered Table
(Lyons Press), was just released. For more information, visit her blog, Cookbooks for Dinner.

Because we buy a beefer every fall, I enjoy a yearly bonanza of beef soup bones — frozen, meaty and bargain priced. Now, I don't have anything against chicken stock. Chicken stock is lovely. But the broth you make from a beef shank bone is a veritable elixir, rich in dissolved gelatin and calcium. Chicken soup may heal the soul, but beef soup makes it invincible.

I've learned to give myself at least a few leisurely hours to draw the magic out of those great bones. You can roast them for more browning and flavor, if you like. You can take them in a hearty peasant direction, like the woman in the checkout line. You can dedicate them to a hot, heady borscht, dolloped with cool sour cream. You can infuse them with roast ginger and onions and steer straight toward pho, the staggeringly delicious beef noodle soup of Hanoi.

The first time I made pho, the children came home from school and halted, quivering, transfixed, on the doormat. "What's that?" they asked. "Something smells good!" I explained, with a heavy emphasis on the noodles. The next time I made it, they opened the door, took a sniff and shouted in unison, "I smell pho!" In other words, the idea of pho claimed them for life, and I can't say I blame them.

You don't have to go farther than your local supermarket to find soup bones. They might be called cross-cut shin bones, beef shank or beef soup bones. Whatever they're called, once you find them and learn to draw out their fortifying power, you'll have forever in your repertoire a soup that sustains the body, strengthens the will and stimulates the imagination. And if in the checkout line you should meet someone directing a curious gaze at your beef bones, don't be shy about sharing.

This borscht is a mash-up of several different recipes in my collection. I love the brilliant color and vibrant flavors. The best part is the mashed garlic, stirred in just at the end so it's still barely tamed when it reaches your bowl and has to be quelled with abundant sour cream. 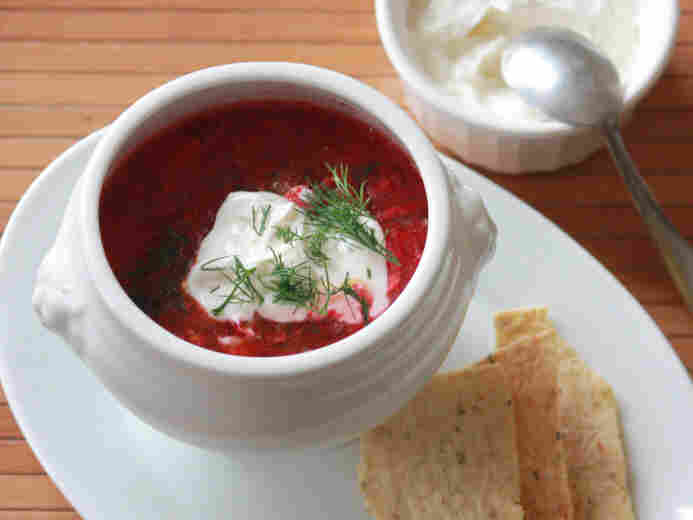 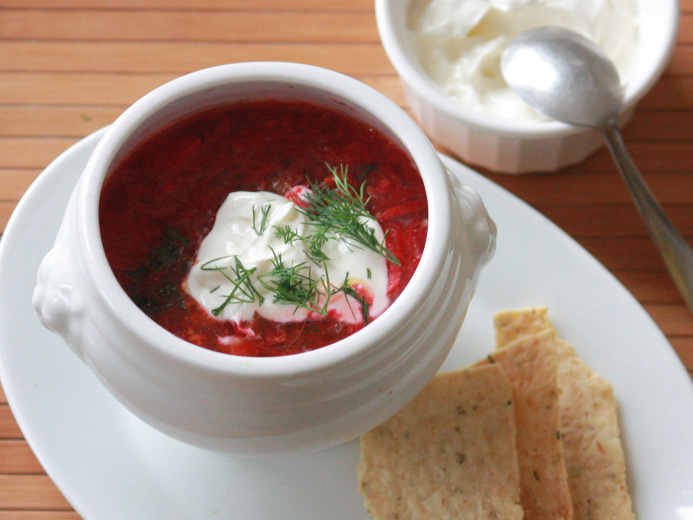 1 large onion, sliced across the equator

For the broth, place the beef, onion, cloves, carrot and celery in a stockpot with cold water to cover. Bring just to a simmer. Let it simmer for 1 1/2 to 2 hours, until the beef falls willingly off the bone. If the liquid level falls during the simmer and exposes the ingredients, top it off with a little water until it's just covered again. Strain the broth into a clean soup pot and keep it at a low simmer. Set the meat aside and discard the remaining solids. When the meat is cool enough to handle, shred into 1/2-inch pieces and add it back to the broth.

Meanwhile, in a medium skillet, melt the butter over medium heat. When the foam subsides, add the grated beets and cook, turning occasionally, until just softened, 5 to 10 minutes. Add the orange juice and bring to a simmer. Add the beet-orange mixture to the soup pot.

Rinse out the skillet and dry it with a paper towel. Heat the olive oil in the skillet until it shimmers and add the diced onion, carrot and celery root. Add a pinch of salt and sweat the mixture until the flavors just begin to mingle, about 5 minutes. Add the vegetables to the soup pot.

Add the grated cabbage and potato to the soup pot and cook 8 to 10 minutes, until potatoes are just tender. Add the mashed garlic (or press it right into the pot) and adjust the seasoning with lemon, sugar, salt and pepper.

Serve immediately, with generous dollops of sour cream and scatterings of dill.

This recipe is based on one in Betty Rosbottom's Sunday Soups (Chronicle 2008). I've streamlined it a bit by browning the meat under the broiler instead of in a pan, and using shank bones and water instead of boneless chuck and beef stock. I've also adjusted some of the other quantities for a brothier, but well-seasoned soup. 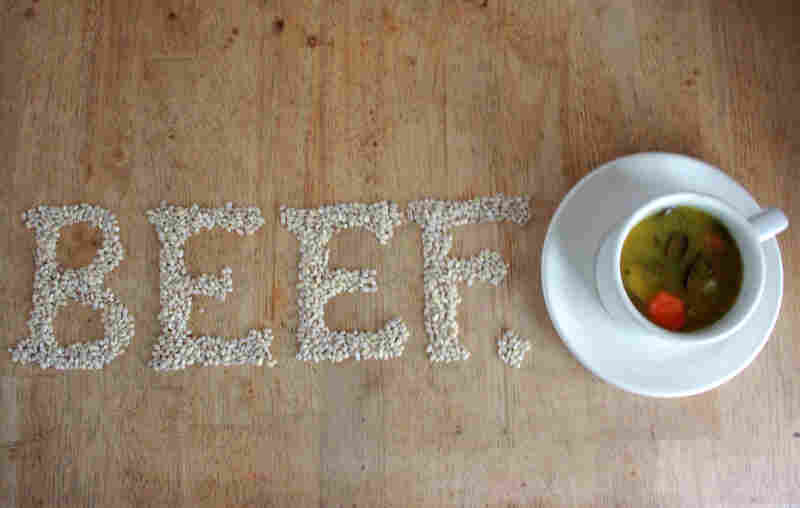 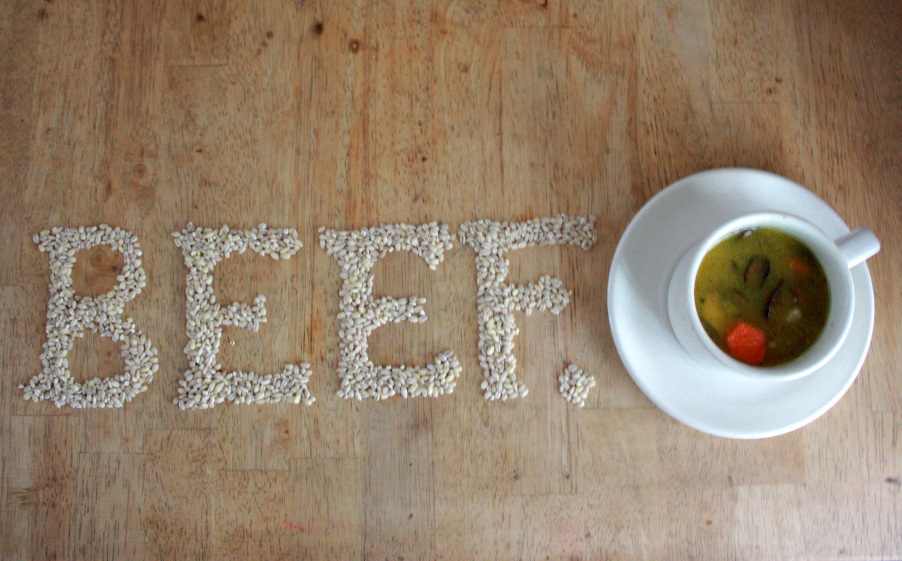 Preheat the broiler. Toss the beef and onion with 3 tablespoons of oil and arrange in a single layer on a foil-lined sheet pan. Set the pan about 4 inches beneath the broiler. Broil, turning partway through, until richly browned on both sides — 3 to 4 minutes per side.

Set the browned meat and onion in a stockpot or heavy soup pot. Add Worcestershire sauce, soy sauce, salt, pepper and water (at least 2 1/2 quarts) to cover. Bring just to the boil and reduce to a simmer. After about 10 minutes, skim off any foam that's collected at the top. Continue simmering over the lowest possible heat for 1 1/2 to 2 hours.

While the broth is simmering, heat 3 tablespoons olive oil in a large, heavy skillet. When hot, add the carrots, celery, parsnips and onion and saute until just slightly softened, about 5 minutes.

When the meat is falling-apart tender, lift it out with a slotted spoon and allow it to cool slightly on a cutting board. Strain the broth into a clean soup pot — you should have about 1 1/2 quarts --and add the sauteed vegetables. Add the potato, barley and thyme to the pot. Pull apart the reserved meat into small chunks with your fingers, including the gelatinous tendon if you wish, and add to the soup pot. Bring mixture to a simmer and cover until the barley and meat are tender, 45 to 60 minutes. Stir occasionally, adding more water if consistency becomes too thick.

Meanwhile, in the skillet you used for the vegetables, heat the remaining 2 tablespoons of olive oil over medium-high heat until it shimmers. Add the mushrooms and saute, turning, until lightly browned, 4 to 5 minutes.

When the barley and potatoes are tender, add the mushrooms and season with salt and pepper to taste. Garnish with chopped parsley, if desired.

The classic Vietnamese beef soup is all about the stock, which is traditionally a serious, all-day undertaking in itself and the subject of fetishistic secrecy and devotion. As much as I'd enjoy being that hardcore, I love and need pho too much for it to be a once-in-a-great-while ordeal. This version is relatively streamlined, although you will need at least 2 hours to simmer the beef, and more would not hurt. Pho, by the way, is perhaps not pronounced the way you think. I've been told it should be more like "Phuh" (rhymes with duh), but elongated and with an upward rise at the end, so it comes out sort of like "phu-uh?" 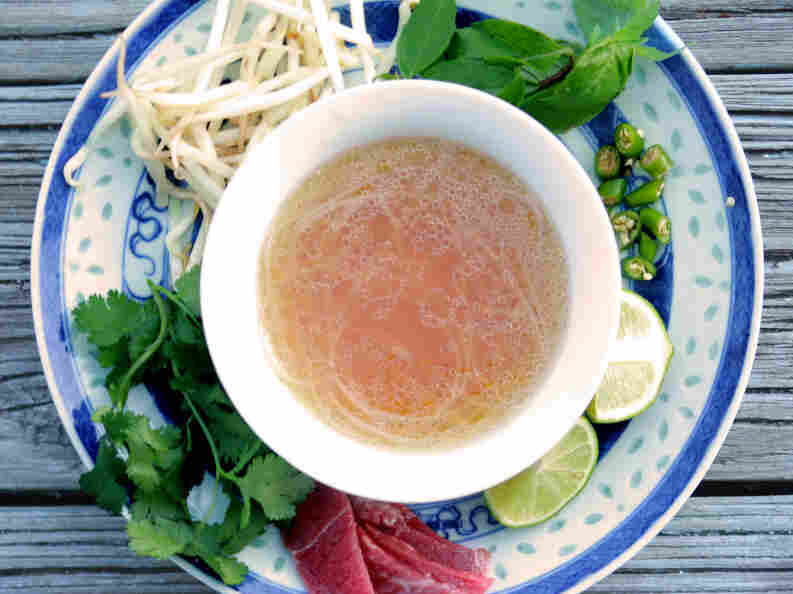 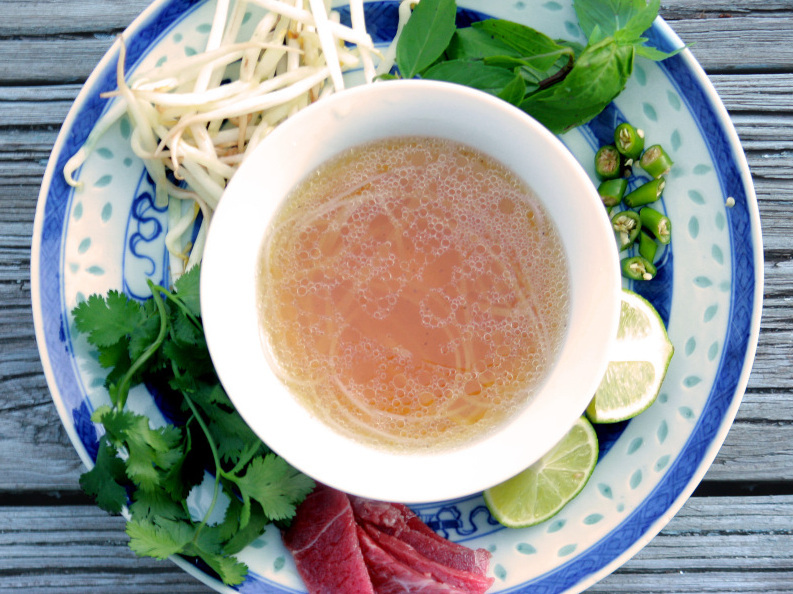 2 large chunks ginger, each about the size of a fingerling potato (3 inches or so)

1 large onion, halved across the equator

Half a 17 1/2-ounce package thin rice noodles (the ones labeled "banh pho," if you can get them)

In whatever quantities and combination you like, but not optional

Bean sprouts, as fresh as possible

Preheat the broiler. Gently rub the ginger and onion with the oil and place them on a foil-lined sheet pan. Set the pan 2 to 3 inches beneath the broiler. Broil, watching closely and turning halfway through, until slightly charred, 5 to 7 minutes. If you prefer, you can accomplish this by leaving out the oil and charring the ginger and onion over an open flame, with tongs. I find the onion tends to slip my grasp, crashing into the flames, when I try to do this.

Place the beef bones and the charred ginger and onions in a large stockpot and cover with at least 3 quarts of cool water. Add the star anise, cinnamon, cloves and peppercorns. Bring just to a simmer and cook, simmering at the very lowest possible heat, for at least 2 hours and up to 4. The meat should fall off the bones. The longer you simmer, the more water will evaporate. Try to top up periodically with enough water to keep the ingredients covered, but don't add any more water for the last half-hour. You should end up with close to 2 quarts of broth.

Lift the meat out of the pot with a slotted spoon, leaving behind the bones, and set aside to cool. Season the broth with fish sauce, sugar and lime juice to taste.

Soak the noodles in warm water until just softened, about 10 minutes.

When the meat has cooled, separate the ringlike tendon from the outside of the flesh (you can discard it, but it really is especially delicious in pho; if it's chewy rather than quiveringly soft, it just needs more time in the pot). Gently slice up the tender meat and tendon into approximately 1/2-inch pieces.

Strain the broth into a clean soup pot. Drain the noodles and add them to the pot, along with the meat. Simmer together until the noodles are cooked, about 7 minutes. Serve the noodles, meat and broth straight from the pot, allowing everyone to re-season to taste (with fish sauce, limes, hoisin sauce, chili sauce) and add their own garnishes.