Accessibility links
Yemen Election: One Person, One Vote, One Candidate Millions of Yemenis voted Tuesday in an unusual presidential election in which the only candidate was the vice president. That was the result of a power-transfer deal with President Ali Abdullah Saleh, who agreed to step down after 33 years. Boycotts and violence affected the polls in some places. 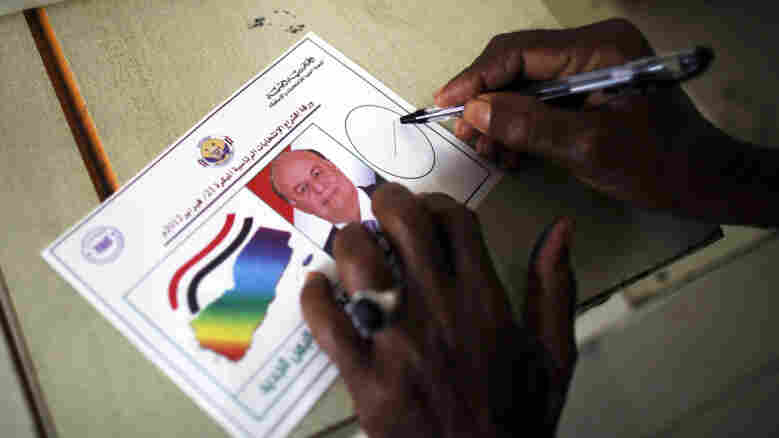 A man casts his vote during Yemen's presidential elections in the southern Yemeni port city of Aden on Tuesday. Only one person was on the ballot: Vice President Abdrabu Mansour Hadi. Khaled Abdullah/Reuters/Landov hide caption 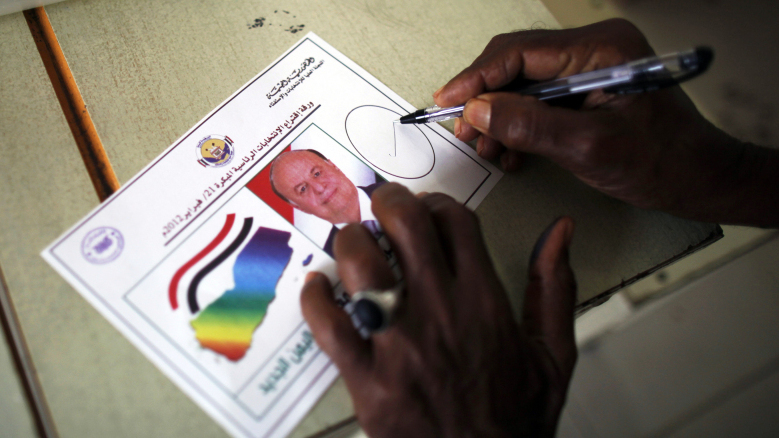 A man casts his vote during Yemen's presidential elections in the southern Yemeni port city of Aden on Tuesday. Only one person was on the ballot: Vice President Abdrabu Mansour Hadi.

Millions of people in Yemen turned out to vote Tuesday in an unusual presidential election. There was only one candidate and only one way to vote — yes.

That candidate, Abdrabu Mansour Hadi, was the vice president under Ali Abdullah Saleh, who ruled Yemen for more than three decades. Saleh finally agreed to step down and transfer power to his vice president after nearly a year of mass protests against his rule.

In the outgoing president's dusty hometown, about an hour's drive outside the capital, Sanaa, and inside a school that served as a polling station, several pictures of Saleh preside over the proceedings, as he has for 33 years in Yemen.

People say that they are voting for the new Yemen, the new start. But it seems as if they are doing it because it's what Saleh wants them to do. 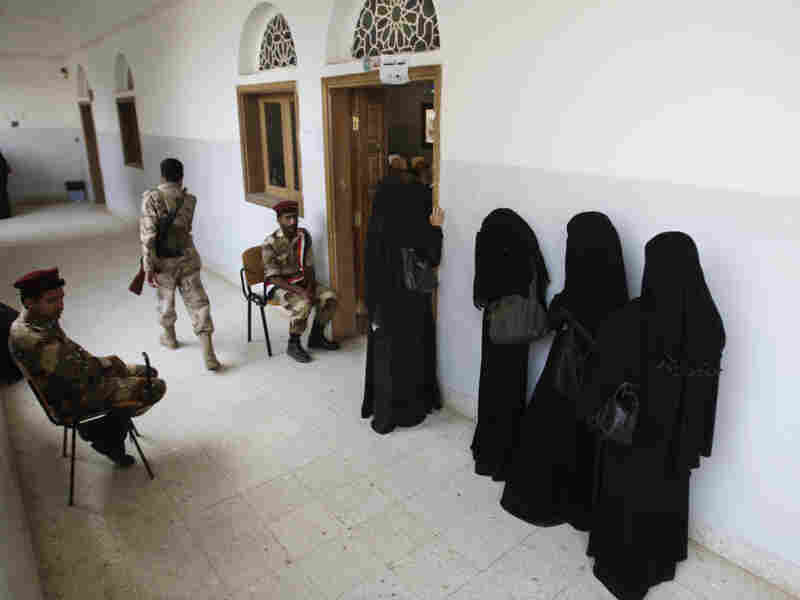 Yemeni women stand in line waiting to cast their votes at a polling station during presidential elections in Sanaa, Yemen, on Tuesday. Hani Mohammed/AP hide caption 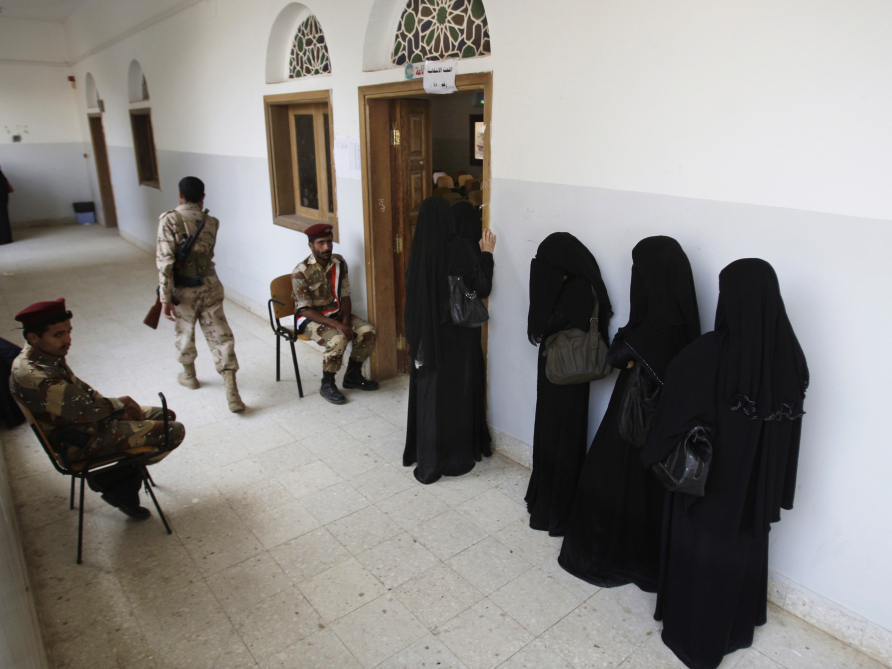 Yemeni women stand in line waiting to cast their votes at a polling station during presidential elections in Sanaa, Yemen, on Tuesday.

If a man marries into your family, she adds, you have to call him stepfather.

But in Shumaila, one of the Yemeni capital's poorest and most crowded neighborhoods, the people are half with Saleh, half against.

The stench of rot is powerful in Shumaila, where basic services such as trash collection and electricity have been hard to come by in recent months.

Resident Aziza Nasr says a new president represents a hope that Yemen might get back to normal again.

Elsewhere in Sanaa, the people in Change Square have yet another perspective. The warren of tents, which looks like something between a shantytown and a state fair, has been the center of protest against Saleh for more than a year.

One huge poster tells those who hated Saleh what to do: Throw him out with your vote.

Some Boycott The Poll

Though several million of Yemen's 25 million people went out to vote, many people boycotted the election.

Part of the agreement for Saleh to step down and his vice president to take over was a promise of immunity for Saleh. Many protesters boycotted the election because, they say, that condition is unacceptable, given that Saleh's forces killed hundreds of protesters.

What's more, an insurgent group in the north and separatists in the south of Yemen say the transfer of power did little to address their demands. In both places, those boycotting the poll blocked people from voting — sometimes with violence.

All of this raises the question of whether a power-transfer deal that's ratified by the people is the right way forward. U.S. Ambassador to Yemen Gerald Feierstein, who played a major role in forging the deal, says it's only the beginning.

Now, says Feierstein, Yemen's new president will need to oversee a two-year transitional period where major changes will be made in the constitution and the military — not to mention keeping the peace while finding a way to bring the north and the south back into the fold.

"I hope that at the end of the two years that we have created a foundation to move the country forward," Feierstein says. "But realistically, we're talking about a generational challenge."