Accessibility links
What's Driving The Backlash Against Traffic Cameras Red-light and speed cameras are now used in 24 states. But angry drivers are fighting back with lawsuits, vandalism and a raft of ballot initiatives. 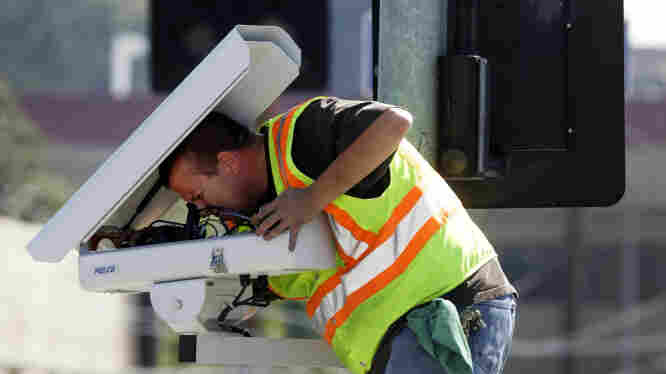 Across the country, fed up drivers are fighting back against traffic cameras that target motorists who speed or run red lights. In Los Angeles, technician Charles Riggings services a traffic camera in 2010. Damian Dovarganes/AP hide caption 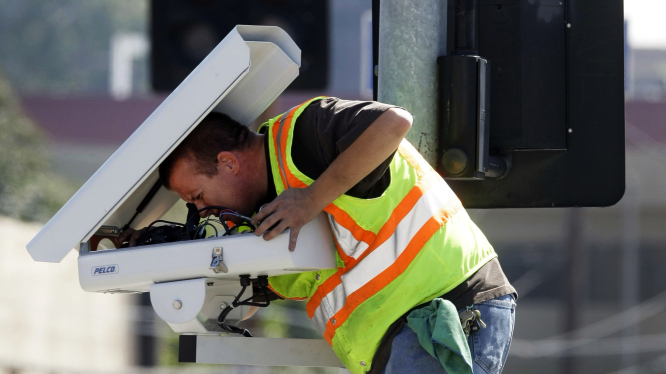 Across the country, fed up drivers are fighting back against traffic cameras that target motorists who speed or run red lights. In Los Angeles, technician Charles Riggings services a traffic camera in 2010.

Have you ever opened your mail and found a traffic ticket sticking you with a not-so-small fine? If so, your reaction might well have been, "What the [expletive]?"

Then maybe you looked carefully at the enclosed photo and realized the vehicle shown (allegedly) running a red light or speeding was, in fact, yours.

Join the outrage coming from hundreds of communities using red-light and speed cameras, which, to many an angry driver, seem to be lurking everywhere. Automated photo enforcement has gained wide support among local officials as a proven method of reducing collisions and enforcing traffic laws, freeing officers to respond to more serious crimes.

Since their broad introduction in the late 1990s, the devices are now used in 661 cities and towns across 24 states, according to the Insurance Institute for Highway Safety.

But if enforcement cameras are all the rage for roads, blowback from drivers is the new road rage.

Motorists bemoaning an intrusion of Big Brother have filed lawsuits claiming that photo enforcement is unconstitutional because it shifts the government's burden of proof to drivers who must prove they are innocent. They cite mechanical failures that produced erroneous tickets in San Francisco and elsewhere. And some hostility has boiled over and led to the vandalism of cameras in cities across the world.

According to thenewspaper.com, more than 700,000 voters in nine states have cast ballots on whether to allow photo enforcement in their communities. Here are cities that rejected traffic cameras in 2011:

By far, most drivers criticize the large sums of money generated by fines. Opponents say red-light cameras actually increase the number of accidents, making the devices little more than cash machines for camera manufacturers and financially strapped governments. And they question the motives of some pro-camera safety groups that receive funding from camera companies.

"Cameras aren't about safety; they are about revenue," says Michael Kubosh of Houston, whose decision to intentionally run a red light as a protest ignited opposition and led to a 2010 voter referendum dumping the city's camera program. After settling a lawsuit brought by the company that supplied the cameras, Houston finally shut off the cameras this year.

"We got really concerned that these cameras were going to be taking a picture of everything, even of me when I go home to see if I'm treating my wife right," Kubosh says. "I'm a person who believes in personal liberties."

As a rule, it doesn't take much to tick off drivers, but on this issue, the zeitgeist is producing results. In roughly 24 cities in nine states, voters have passed ballot initiatives rejecting cameras, with decisions passing in eight of the cities last year alone. Also last year, the Los Angeles police commission voted to end the city's program.

In Congress, the surface transportation bill drafted by House Republicans includes a ban on the local use of federal funds to pay for enforcement cameras.

Big Money Behind The Camera

But communities are raking in millions of dollars in ticketed fines, which can range from $100 to $300 and often double if not paid within 30 days. It's a godsend for governments searching for new revenue to plug budget holes.

In Chicago, the success of red-light cameras, which brought in $69 million in 2010, persuaded the city to recently expand to speed cameras — projected to ring up $150 million in revenue the first year, according to one estimate.

In Houston, city officials denied that their support of cameras was motivated by money. Yet one state lawmaker from Houston admitted in a local radio interview that he voted for a bill authorizing the camera program at the behest of city officials and despite believing "it's really a revenue source."

Where The Cameras Are

According to the Institute for Highway Safety, the devices are now used in 661 cities and towns across 24 states.

A study by the consumer advocacy group U.S. PIRG addressed the financial incentives behind camera programs. PIRG found that many contracts between local governments and camera companies require the parties to divide revenue from fines. Some contracts mandate the narrowest duration of yellow lights, preventing governments from lengthening the time — which could reduce the number of violators ticketed.

"In other words," the study states, "the more tickets a camera system issues, the more profit the vendor collects."

In addition, some groups that promote camera enforcement programs receive funding from the camera manufacturers. For instance, the National Coalition for Safer Roads draws some of its support from one of the nation's biggest vendors, Arizona-based American Traffic Solutions, which had supplied Houston's cameras.

Red-light cameras came years before speed cameras and are used in far greater numbers. They also have been the subject of volumes of research, with most results slicing data to both support and undermine the effectiveness of the devices.

Last year, the Insurance Institute for Highway Safety compared big cities with and without red-light cameras and determined that the devices reduced the rate of fatal crashes due to red-light violations by 24 percent. The study also found a 17 percent reduction in fatal accidents caused by other factors.

"The research is conclusive that they make intersections safer," says Jackie Gillan, president of the Advocates for Highway and Auto Safety, one of the strongest proponents of photo enforcement. "If you run a red light and put somebody in danger, I think a ticket is a small price to pay."

Gillan also discloses that "about 10 years ago, I was hit broadside by a guy who ran a red light. I had shoulder surgery and a year of therapy. So I have no sympathy."

Opponents note that the same two reports — in addition to others — also concluded that red-light cameras increase the number of rear-end accidents caused when people suddenly brake to avoid tickets.

The National Motorists Association, a leading group opposed to the cameras, advocates the use of alternatives it says would more effectively reduce both accidents and red-light violations, such as lengthening the duration of yellow lights.

The group has launched a campaign to urge communities to try its recommended "engineering solutions." If the alternatives don't reduce red-light violations by 50 percent, the motorists association has promised to give any community $10,000 for other traffic-safety programs.

Any takers so far?

"Not a one," says National Motorists Association spokesman John Bowman. "The next question to ask, then, is what does that really tell you about the motivations of cities that are running these programs?"