Accessibility links
Is A Lie Just Free Speech, Or Is It A Crime? The Supreme Court heard oral arguments Wednesday over the constitutionality of a law that makes it a crime to lie about having received a military medal. But the questions posed by the justices ranged far beyond that from deceptive advertising to lying on a date. 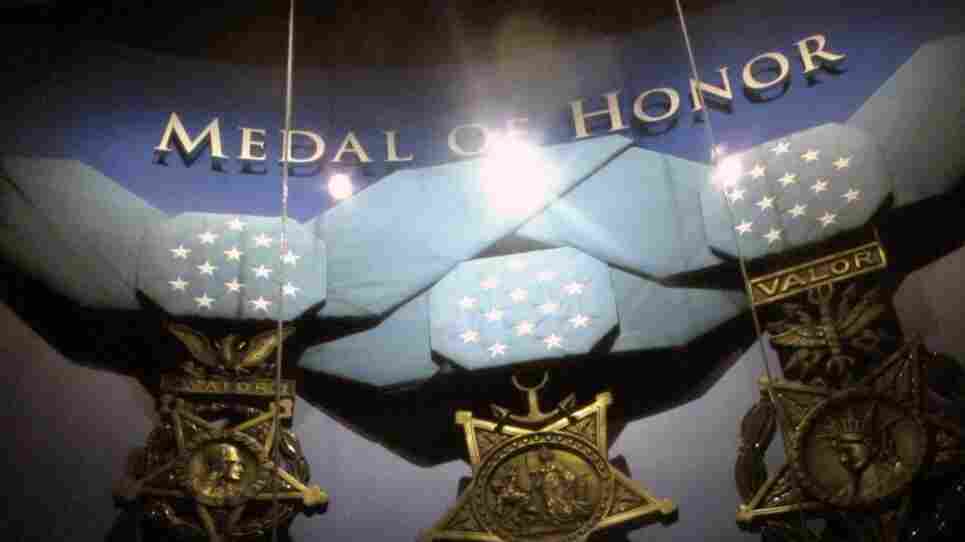 The Supreme Court heard arguments over whether it should be a crime to lie about receiving military medals. Here replicas of the medals hang at the Medal of Honor Museum. Bruce Smith/AP hide caption 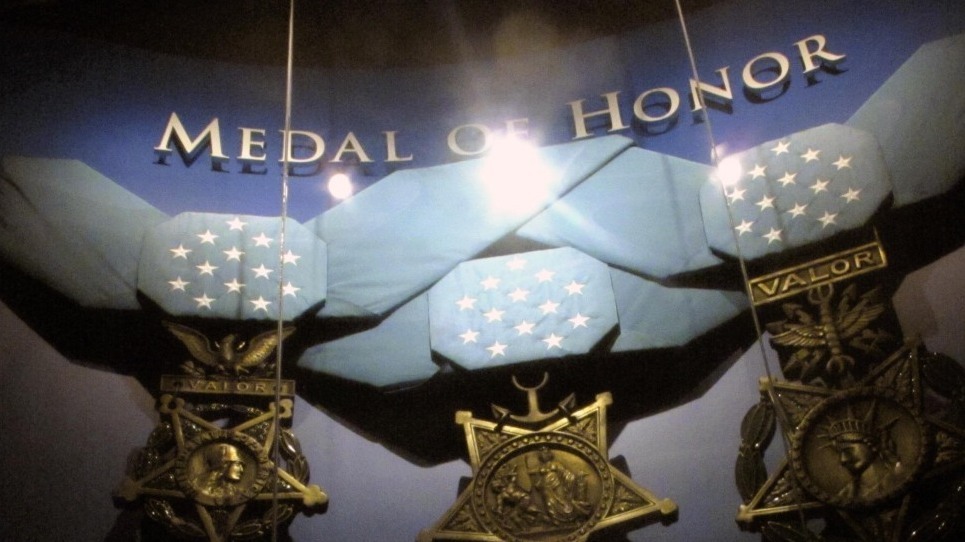 The Supreme Court heard arguments over whether it should be a crime to lie about receiving military medals. Here replicas of the medals hang at the Medal of Honor Museum.

The U.S. Supreme Court took up the subject of lying on Wednesday.

Specifically at issue was the constitutionality of a 2006 law that makes it a crime to lie about having received a military medal. But the questions posed by the justices ranged far beyond that — from advertising puffery to dating lies.

At the center of the case is Xavier Alvarez, a former California county water board member who is an undisputed liar. Among his lies is that he played professional hockey, served in the Marines and rescued the American ambassador during the Iranian hostage crisis. None of those lies was illegal.

But when he claimed to have won the "Congressional Medal of Honor," that lie was a violation of the Stolen Valor Act, which makes it a crime to make false claims about receiving military medals.

Alvarez appealed his conviction and won. A federal appeals court struck down the law as a violation of the First Amendment guarantee of free speech.

The government appealed to the Supreme Court, where Solicitor General Donald Verrilli on Wednesday told the justices that the law regulates only a narrowly drawn category of calculated falsehoods, and that the "pinpointed" pure lies targeted by the statute are not speech protected by the First Amendment.

But Verrilli soon faced a barrage of questions about when Congress can make it a crime to tell a lie that does not defraud or defame.

Justice Sonia Sotomayor began by asking whether, under this law, the government could have prosecuted a Vietnam War protester for holding up a sign that said, "I won a Purple Heart — for killing babies," when the protester had not won the medal.

Verrilli answered that "it would depend" whether that expression was "reasonably understood by the audience as a statement of fact or an exercise in political theater."

"That's somewhat dangerous, isn't it," responded Sotomayor, noting that she thought it was the government's position that there are no circumstances in which calculated and false factual speech has value.

Yes, Verrilli said, that is the government's position. It is also the Supreme Court's position, expressed repeatedly in its opinions, he maintained.

At that suggestion, Justice Anthony Kennedy almost levitated out of his chair.

"I simply can't find that in our cases," he said. "I think it's a sweeping proposition to say that there's no value to falsity."

Verrilli responded by trying to narrow the reach of the language in the Stolen Valor Act. The law, he argued, regulates "a very narrowly drawn and specific category of calculated factual falsehood, a verifiably false claim that an individual has won a military honor, and that's information that is ... uniquely within the knowledge of the individual speaker."

Still, Chief Justice John Roberts wondered, "Where do you stop?"

Could Congress make it a crime for a person to falsely claim that he graduated from high school?

Verrilli conceded that Congress, or more likely state governments, could make it a crime to lie about having graduated from high school.

Justice Kennedy, however, was clearly in search of some narrower category of false speech that could be outlawed. "You can argue that this is something like a trademark, a medal in which the government and armed forces have a particular interest, and we could carve out a narrow exception for that," he said. "But just to say that ... there is no value to false speech, I simply cannot agree."

Justice Samuel Alito asked whether the military medals law is limited to statements a person makes about himself.

Verrilli said it is, but then Alito asked why the government chose to draw the line there. "Suppose the statute also made it a crime to represent falsely that ... a spouse or a child was a medal recipient?"

Justice Ruth Bader Ginsburg broadened the question further. Could Congress criminalize other false statements, such as denying that the Holocaust occurred?

Verrilli replied that that kind of statement would be protected under the First Amendment because "it's so bound up with matters of ideological controversy." He said that the Holocaust example was different from this case, which involves, with "pinpoint accuracy, a specific verifiable claim about yourself having won a medal."

Justice Elena Kagan noted that quite a few states have laws on the books that make it a crime for political candidates to lie during a political campaign. But Verrilli said those laws too would likely be unconstitutional because they would risk chilling speech.

Justice Antonin Scalia noted that, "Even in the commercial context we allow a decent amount of lying, don't we? ... It's calling puffing."

"What about lying about extramarital affairs?" asked Kagan. After all, she observed, the government has a strong interest in the sanctity of the family.

"The trouble is," interjected Justice Stephen Breyer, that we "can think of 10,000 instances that meet your criteria" for laws that could criminalize everyday lies.

"[T]he core of the First Amendment," observed Justice Sotomayor, is to protect even offensive speech." In this case, she contended, "we don't think less of the medal ... we're offended" by the lie. "So outside of the emotional reaction, where's the harm?"

"I'm not minimizing it," Sotomayor added. "I take offense when someone I'm dating makes a claim that's not true."

At that, Solicitor General Verrilli piped up. "As the father of a 20-year-old daughter, so do I."

But this law involves weighty symbols of courage and valor, Verrilli said. These medals "are a big deal. You get one for doing something very important, after a lot of scrutiny. And for the government to ... stand idly by when one charlatan after another makes a false claim to have won the medal does debase the value of the medal in the eyes of the soldiers."

In that case, Justice Ruth Bader Ginsburg wondered, did the military ask Congress to enact the military medals law?

No, Verrilli replied. It did not.

Following Verrilli to the podium was the lawyer for Alvarez, public defender Jonathan Libby.

The first question came from Chief Justice Roberts: What is the First Amendment value in a pure lie?

Libby answered that people often make things up about themselves, such as when Samuel Clemens created Mark Twain, fabricating much material about his own biography.

Justice Alito persisted: "Do you really think that there is a ... First Amendment value in a bald-faced lie about a purely factual statement that a person makes about himself?"

When Libby floundered, Justice Breyer interjected by providing an example of a lie that had value: "Obvious example ... are you hiding Jews in the cellar? No." The example was a reference to people who hid Jews from German storm troopers during World War II.

But even some of the justices who voiced concerns about the government's argument still seemed reluctant to strike down the law outright.

Justice Kennedy opined, "It's a matter of common sense that ... [the false claim to a medal] demeans the medal."

Justice Kagan questioned whether the Stolen Valor Act could affect other forms of speech. "The reason we protect some false statements ... is to protect truthful speech," she observed. So, "how is it that this statute will chill any truthful speech?"

Defense lawyer Libby conceded that he could not think of a way the Stolen Valor Act would in fact chill speech.

How much harm, asked Justice Alito. Suppose the lie built up the liar so much that he got a date with a rich potential spouse. Would that be enough harm?

I certainly would not think that is a significant "thing of value," Libby responded.

Alito, with a wry smile: "Some people might have a different opinion."