Accessibility links
Movie Interview - Cutter Hodierne On 'Fishing Without Nets' Writer-director Cutter Hodierne, whose short feature film on Somali pirates recently won a jury prize at Sundance, talks with Melissa Block about shooting his film in East Africa and telling his story from the perspective of the pirates. 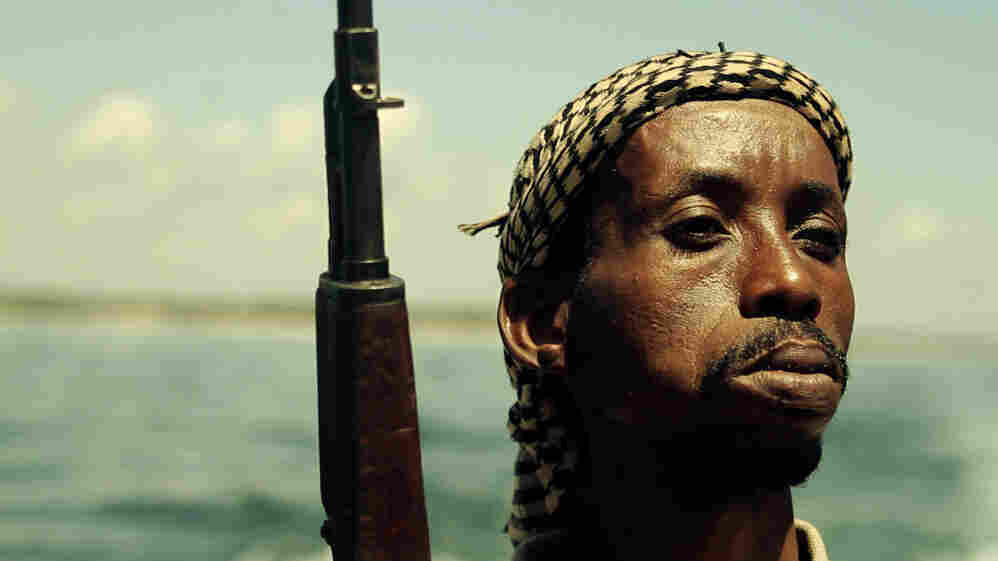 A still from Fishing Without Nets. Writer-director Cutter Hodierene cast Somali refugees and militia fighters in his short film about a fisherman who is drawn by need into piracy. Sundance Film Festival hide caption

A battered wooden skiff motors along the horn of East Africa. Onboard are a half-dozen men clutching AK-47s and debating whether they'll need to shoot. They are Somali pirates.

Or rather, they're actors playing Somali pirates in a short feature film titled Fishing Without Nets. It tells the story of piracy off the coast of Somalia — from the perspective of the pirates — and it won the jury prize for short filmmaking at this year's Sundance Film Festival.

Twenty-five-year-old writer and director Cutter Hodierne says when he heard about the Somali pirates in 2008, he was obsessed by the topic.

"There was something about these hapless criminals — who were in many cases 16- and 17-year-old guys — who had these big shipping companies by the throat and had the attention of all of the world," Hodierne tells NPR's Melissa Block. And what was interesting to Hodierne, he says, was "telling the story from the perspective of the Somalis."

"I sort of saw their angle as the side of the story that nobody could get in and try and tell," he says.

Hodierne traveled to Somalia for research but shot the film in adjacent Kenya.

"We chose Mombasa, Kenya, because geographically we thought we could make it look like Somalia, and there's a large Somali refugee population," Hodierne says.

There, Hodierne began working on the script. He cast Somalis he and his crew met on the street, along with actors from auditions set up at a local nightclub.

"It all went through this one guy named Abu Bakr," Hodierne says. "And Abu Bakr was like the William Morris Agency of East Africa. He linked us up with some very authentic guys who had just been in Somalia very recently, and who were militia fighters."

At the center of Fishing Without Nets is a young man named Abdi, a fisherman and father with a baby daughter. Although Abdi is struggling to get by with very little money, he initially refuses a pirate's offer of some quick cash, saying he wants to stay honest and teach that honesty to his children. But the lure of big money grows as Abdi's situation gets more desperate, and ultimately he's pulled in.

Hodierne explains that when he started his research, he had a romanticized view of pirates.

"I was going over there to portray a Robin Hood story and thought, 'These guys are fighting back against illegal fishing in their waters and the dumping of waste,' " Hodierne says. "When I arrived there, and I started living among these guys — and getting robbed and stolen from myself — I started to realize it wasn't this simple. There's a sliding scale of morality that exists in a place where people are very desperate, and I started to change my perspective on how I viewed the pirates."

By telling the story from the pirates' perspective, Hodierne admits, the film may ask its audience to empathize with a character who's doing wrong.

"You do run the risk of glorifying something that shouldn't be glorified," Hodierne says. "But on a human level, you could ... empathize with anybody who's in a desperate situation and is doing something they wouldn't otherwise do."

Hodierne says that he doesn't support Somali piracy but understands why someone would take to that life.

"I think it comes down to just not having your basic human needs met," Hodierne says. "I think the guys who are infantry in Somali piracy are not unlike low-level drug dealers in urban areas in America, who see [choosing crime] as not having many other options. It comes down to money and needing to survive. It's not the right thing to do, but it can be a means to become extremely rich in a short matter of time by doing something extremely, extremely risky."