Accessibility links
With Banks As Landlords, Some Tenants Neglected Big banks and other large investors are buying up tens of thousands of foreclosed rental properties across the country. According to tenants and regulators, they're not model landlords. Some fail to follow housing codes, leaving tenants to live without even a number to call in the most dire situations. 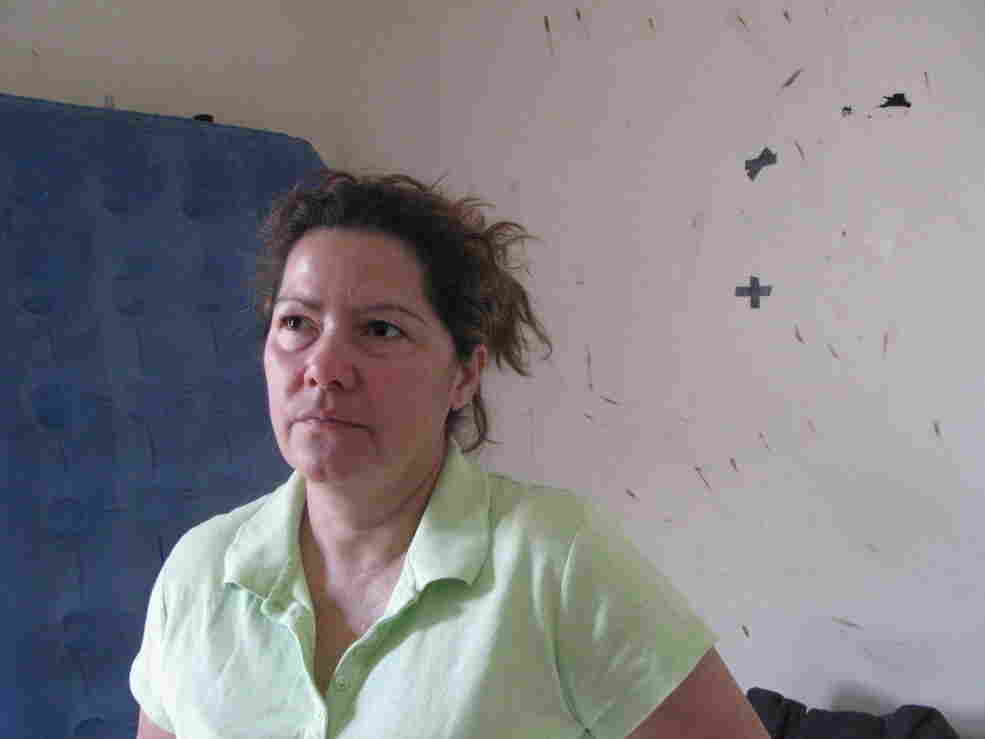 Luz Escamilla's bedroom walls are stained with the blood of bedbugs. She says she doesn't want to bleach them until reps from CW Capital, her landlord, pay an in-person visit to her Maryland home. Aarti Shahani/NPR hide caption

Across the country, big banks and other large investors are buying up tens of thousands of foreclosed rental properties. They're not always model landlords, according to tenants and regulators. Some banks are failing to follow local and state housing codes, leaving tenants to live in squalor — without even a number to call in the most dire situations. 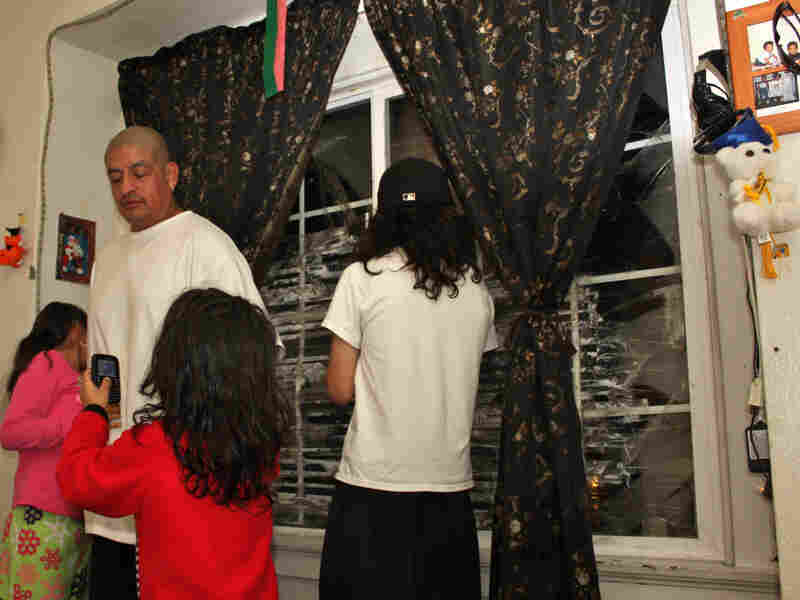 Pedro Jimenez and three of his kids, in the living room of their Oakland, Calif., apartment. JPMorgan Chase hasn't hired a management company to fix the shattered window panes or make other repairs. Mario Lugay hide caption 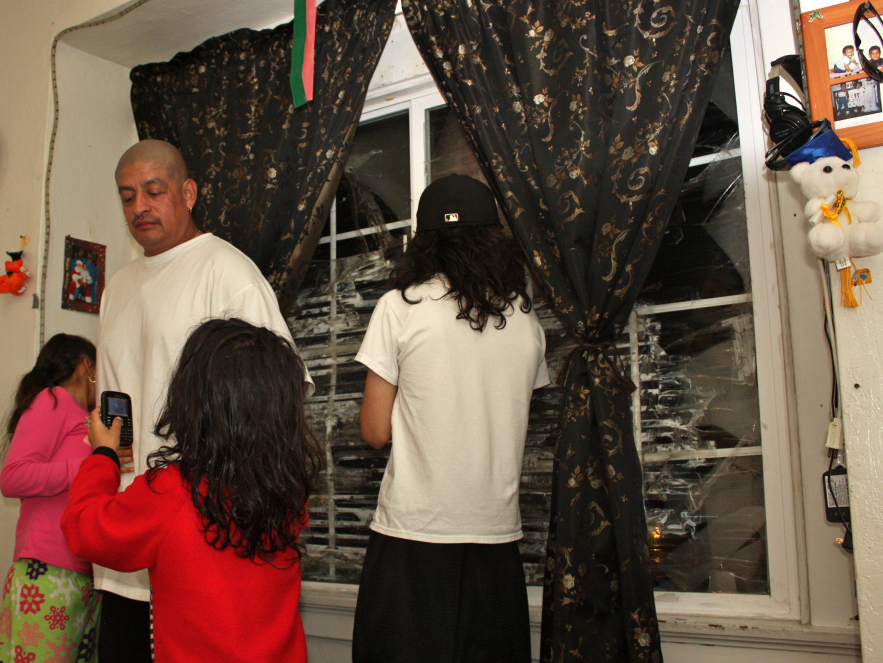 Pedro Jimenez and three of his kids, in the living room of their Oakland, Calif., apartment. JPMorgan Chase hasn't hired a management company to fix the shattered window panes or make other repairs.

Pedro Jimenez signed the lease for his second-floor apartment in Oakland, Calif., in 2006. Since then, he says, "Here was leaking water. Part of the ceiling [fell]. See all the windows crack." The panes are completely shattered; vandals broke them, he says.

East Oakland is a rough part of town. It's known for abandoned buildings and a high crime rate. Still, it's home for Jimenez, a single dad with four kids.

His 7-year-old son, David, plays handyman. While his father patches the walls with plywood, David covers holes with sticky notes. There are yellow squares in every room but one: a bathroom that has been nailed shut.

"It's dirty and it's nasty," David warns. That's code for "dangerous." It has broken plumbing, splintered wood and exposed electrical wires. The original landlord was renovating when he lost the place in foreclosure, back in 2007.

Jimenez recalls a real estate agent coming by one day to collect rent for the new owner, Deutsche Bank. Soon after, the water stopped running altogether because no one paid the bill. The utility company wouldn't let Jimenez pay just his part; it accepts only full payment for all units in a building.

Jimenez recalls not knowing whom to call for help. So he lifted a meter from a vacant home and reinstalled it in his. "It was the illegal way," Jimenez admits. "I'm not going to say I was doing it legally." 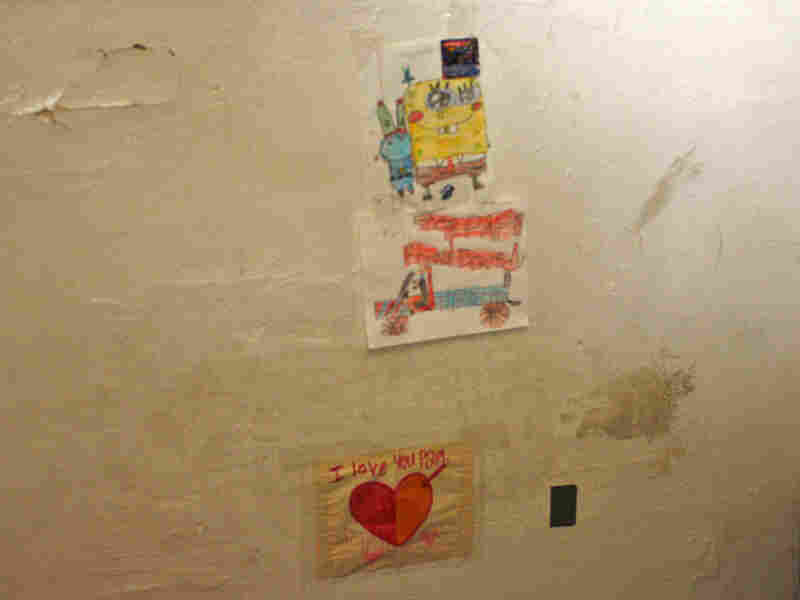 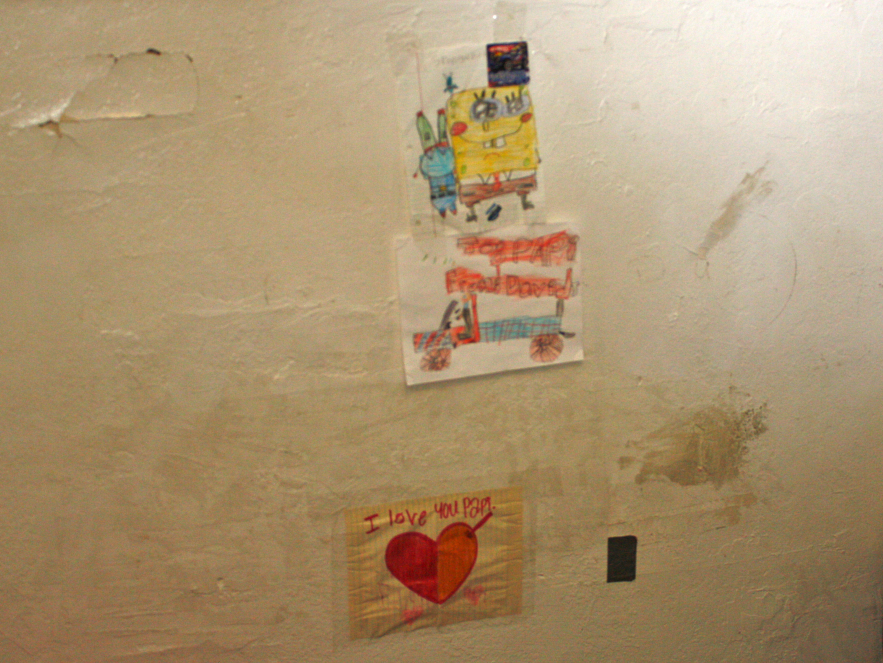 David Jimenez, 7, patches up holes in his East Oakland, Calif., apartment. The bottom sticky note says, "I love you Papi."

Jimenez doesn't know that Deutsche Bank actually isn't his landlord. It's the trustee representing a pool of investor-owners. JPMorgan Chase, the loan servicer, handles maintenance and tenants. Jimenez has never spoken with bank employees. He and JPMorgan Chase disagree about why repairs haven't happened, and why rent payments stopped last year.

According to Paul Leonard, banks are taking back homes that no one else can afford to buy. He's senior vice president of the Housing Policy Council, a trade group for the biggest housing market investors.

"Banks don't want to take your home and own it," Leonard says. They're stuck with plumbing and electrical maintenance that is well beyond their mission, he adds. "They have to hire a property manager to take care of the property."

Yet not all banks do so. "Some are better than others," Leonard says. "I think that what banks would like to do is, they would prefer a clean sale to someone that can handle it."

The challenge is just finding the new landlord, because in many cases it's difficult to find a real, live human being that's going to take responsibility for that property.

The sheer volume is overwhelming, Leonard says. The Oakland city attorney says foreclosed properties are being bought and sold so quickly, it's hard to know whom to hold responsible for what. The banks don't return calls made by the city, officials say.

The U.S. Treasury recently warned banks that they must fulfill their duties as landlords. It's a nationwide concern. In Maryland, bank regulator Anne Norton says that for tenants and local authorities, the challenge is just finding a new landlord.

"In many cases it's difficult to find a real, live human being that's going to take responsibility for that property," she says.

Try Taking A Bank To Court

That's difficult even when there is a property manager. Luz Escamilla in Hyattsville, Md., says she sleeps with the lights on, "waiting for the bugs to come up." Her place is infested. There are chocolate-colored blotches all over her walls; it's the blood of bedbugs she has killed.

Escamilla pays $1,200 a month in rent. When the management company wouldn't fumigate for bugs or fix broken stoves, she and other tenants set out to find the landlord. CASA de Maryland, a local nonprofit, helped track down CW Capital, the servicer.

CW Capital granted the group a meeting in its high-rise office building in Washington, D.C. Sitting across a conference table, tenants faced men in suits. When one started talking finance, organizer Lindolfo Carballo recalls, a tenant became indignant: "One of the tenants stood up and said, 'You know what, I don't want to hear that. I want to hear when are you going to put my cabinets back in my kitchen?' "

CW Capital declined NPR's request for an interview. But tenants say a company representative did end up visiting them and even repaired those cabinets. Bedbugs and other problems, though, remain untreated. So tenants sued in housing court.

Norton, the Maryland bank regulator, says it's often more challenging to take a bank to court than a mom-and-pop landlord.

"Due to disproportional bargaining rights between tenants and the parties that are the investors, tenants feel that they don't have a voice and also don't have rights," Norton says.

States are at a loss, too. They aren't sure how to make banks comply with their housing codes. Norton and nine other regulators are now drafting guidelines to help states crack down.

Pursuing The American Dream, By Renting March 27, 2011
Some Tenants Pay The Price For Mortgage Excesses Oct. 12, 2009