Accessibility links
Movie Review - 'The Forgiveness Of Blood' The Forgiveness of Blood follows a teenager who is forced into hiding when a land dispute between families turns violent. Critic Jeannette Catsoulis says the film is an immersive look at the power of archaic traditions to sabotage a transitioning culture.

In Albania, A Blood Feud Interrupts A Facebook Life

In Albania, A Blood Feud Interrupts A Facebook Life 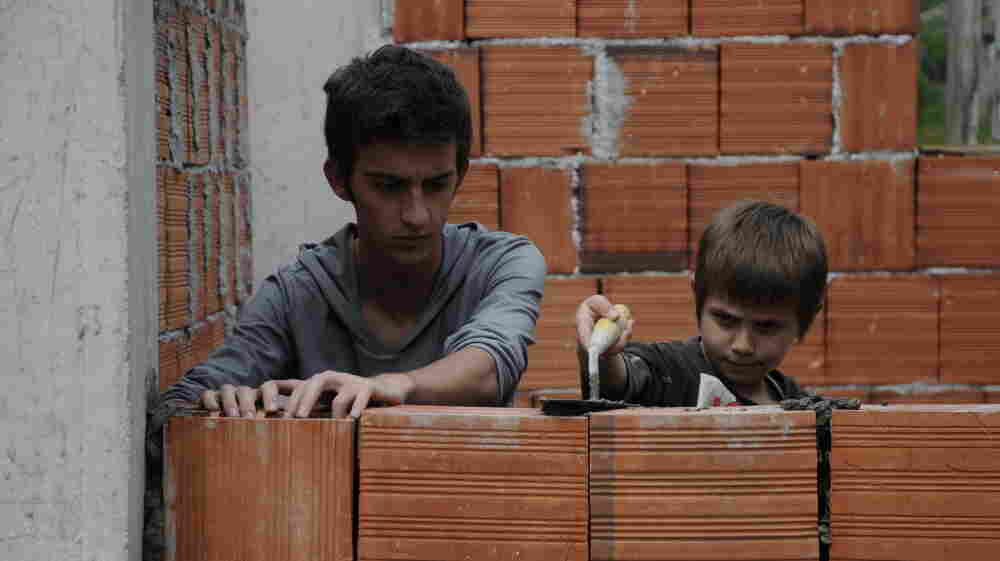 Nik (Tristan Halilaj, left) and his younger brother, Dren (Elsajed Tallalli), must both stay indoors to avoid violent retaliation after their father kills a member of another family. Anila Jaho/IFC Films hide caption

The Forgiveness
of Blood

In Albanian with subtitles

From 'The Forgiveness of Blood' - 'Untied'

From 'The Forgiveness of Blood' - 'Trade-offs'

From 'The Forgivenesss of Blood' - 'Turn Back'

He may have exchanged Colombian drug dealers for Albanian farmers, but director Joshua Marston hasn't strayed as far as it seems from his award-winning 2004 debut Maria, Full of Grace. In The Forgiveness of Blood, he focuses once again on young people caught in the backlash of adult misdeeds, trying to survive in an environment of minimal choices and maximal danger.

Told mostly through the eyes of Nik (Tristan Halilaj), a lively teenager whose carefree life is abruptly derailed through no fault of his own, the film is an immersive look at the power of archaic traditions to sabotage a transitioning culture.

When a land dispute between a hotheaded neighbor (Veton Osmani) and Nik's father (Refet Abazi) ends with the former dead and the latter in hiding, the dictates of custom supersede the law: In accordance with a 15th-century code known as the Kanun — still observed today — the bereaved clan may seek revenge by killing a male from the murderer's family. Within the space of a few hours, Nik's Facebook-and-motorcycles existence has been transformed by the perils of a blood feud.

Given the premise, Forgiveness is a remarkably peaceful film, one that keeps its music subtle and its violence on the margins. Shooting on location in northern Albania and using nonprofessional actors, Marston (who wrote the script with an Albanian colleague, Andamion Murataj) conjures an atmosphere of slowly swelling threat that is queasily effective.

A loophole in the Kanun guarantees Nik's safety if he remains indoors — for years, if necessary — and the psychological burden of this endless siege becomes increasingly oppressive. Forced to abandon his dreams of opening an Internet cafe and pursuing his classroom crush (Zana Hasaj), Nik fumes against the father who refuses to turn himself in to the police — an act that would at least offer hope for mediation with the victim's family.

Unavoidably claustrophobic — Nik's confinement is also our own — the film breathes more easily in the company of his resourceful 15-year-old sister, Rudina (a fine Sindi Lacej). Once a promising student with a bright future, Rudina must take over her father's bread-delivery route to support the family, and her evolution from laughing schoolgirl to wily earner lends the film texture and depth. The sins of the fathers may be visited upon the sons, but Rudina's plight reminds us that daughters pay, too.