Accessibility links
For Asians And Latinos, Stereotypes Persist In Sitcoms Critic Eric Deggans says in modern TV comedies, there are fewer stereotyped roles for African-Americans — but two CBS shows suggest that's not the case for Asians and Latinos. 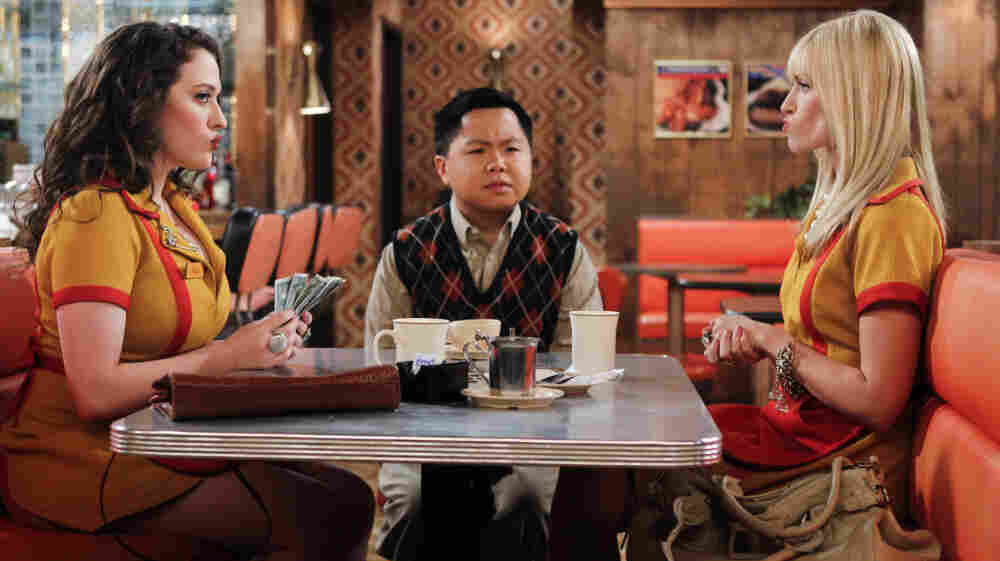 I was flipping around TV channels one evening, and I noticed something amazing. There was a glorious absence of black actors playing maids, sassy, streetwise pimps or bug-eyed buffoons.

And then I saw Han Lee.

On CBS' hit comedy 2 Broke Girls, he owns the diner in Brooklyn where the show's sassy heroines just happen to work. He's a walking bundle of stereotypes: Broken English. Socially awkward. Mostly asexual. His heavy accent is always good for a laugh or two.

And I'm left to wonder: Why are we still discussing this? TV producers got this memo years ago about black characters. But Asians like Han Lee — and Latinos — haven't been so lucky.

Consider this scene from ABC's quickly-canceled sitcom Work It — a comedy where one pal explains to his buddy that he's not sure the friend has what it takes to fit in at the pharmaceutical company where they're hoping to land a job.

"I'm not sure you'd be up for everything this job requires," says Guy A.

"What, I'm Puerto Rican — I'll be great at selling drugs," says Guy B.

And then there's Rob. Rob is a new CBS comedy starring ex-Saturday Night Live star Rob Schneider, based on his real-life marriage into a Latino family. But his character, also named Rob, doesn't do well in his first meeting with his new wife's relatives. First Schneider cracks that his new relatives looks like the audience at a Julio Iglesias concert. Then his undocumented uncle-in-law tries to borrow $7,200. There were gags about siestas, and how they lead to big families.

Lately, Rob just looks like a badly written show, told from the perspective of its white star, surrounded by thinly developed Latino supporting players. But still.

It's taken a long time to wean writers off the easy jokes provided by stereotypes of black people. It shouldn't take nearly as long to travel that road for Latino and Asian characters.

I say it's time for writers and producers to remember the lessons taught by The Cosby Show, Chappelle's Show and Treme — sometimes landmark success comes not from echoing stereotypes, but helping talented performers of color transcend them.

Eric Deggans is the TV and media critic for the Tampa Bay Times.