Accessibility links
Ranchers' Land In Nebraska Becomes Ground Zero In Energy Fight Landowners in Nebraska were offered large sums of money to allow the Keystone XL pipeline to cross their land on its way from Canada to the Gulf Coast. For some, the proposed pipeline symbolized new jobs and energy independence, but others saw it as environmentally dangerous. 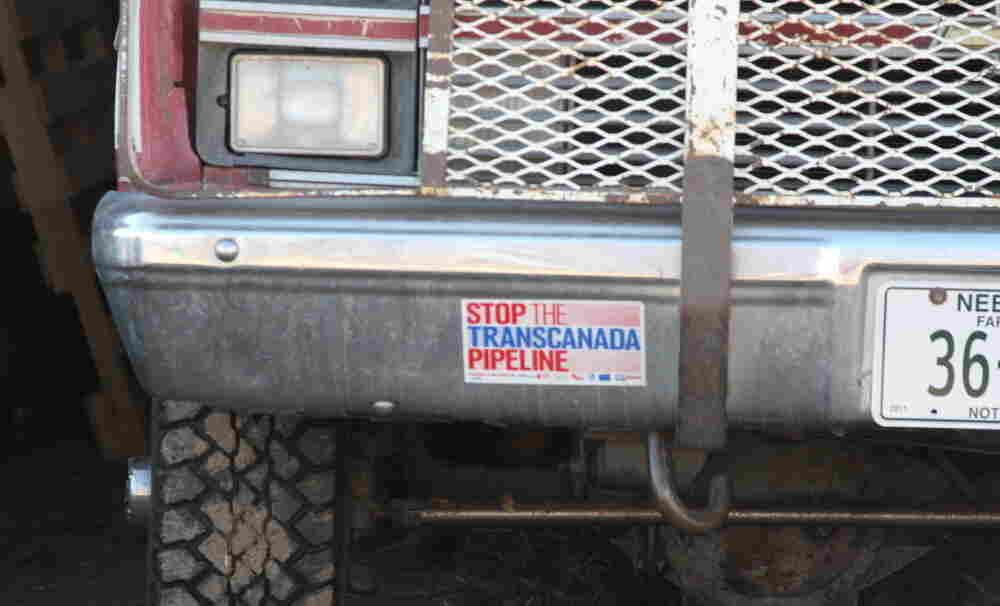 An anti-pipeline bumper sticker on rancher Sue Luebbe's pickup. Four years ago, she stood on the hood of the truck and pointed a rifle at a helicopter that was surveying her land for TransCanada. Guy Raz/NPR hide caption 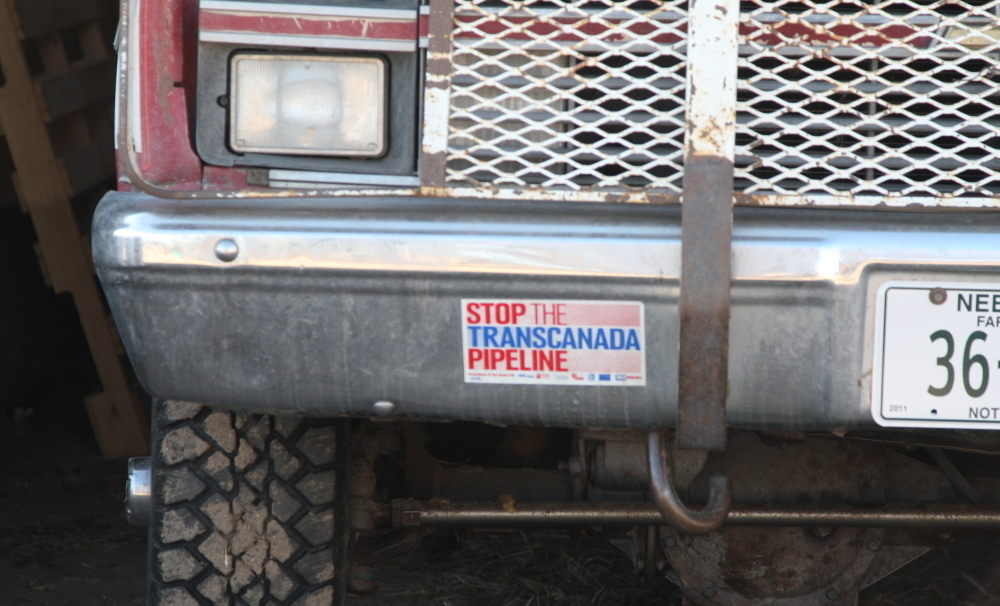 An anti-pipeline bumper sticker on rancher Sue Luebbe's pickup. Four years ago, she stood on the hood of the truck and pointed a rifle at a helicopter that was surveying her land for TransCanada.

Gas prices are spiking once again; the cost of a gallon of regular unleaded is about 12 percent higher than it was a year ago. But winter typically isn't the time for a rise in gas prices. Demand for gasoline is at a 14-year low and domestic oil production is at an eight-year high.

Some analysts link the increase in gas prices to the tensions in Iran and speculators on Wall Street. Others point to policy decisions limiting drilling in environmentally sensitive areas, as well as President Obama's decision to deny a permit for a massive oil pipeline called Keystone XL.

The proposed pipeline would travel 1,800 miles from Alberta, Canada, all the way down to the Gulf Coast. The controversy over its impact — environmentally, politically and economically — makes it prime election issue.

TransCanada, the company behind the proposal, already operates a massive pipeline that has been pumping crude oil from Canadian tar sands. The pipeline ends in the small town of Cushing, Okla., where the oil is stored in massive tanks scattered across the town.

When you've got an 8.3 percent unemployment rate in America and we're trying to have energy independence, to me this was a no-brainer.

Canada has the potential to produce more than six times the amount of oil it now makes. Because the existing pipeline ends in Oklahoma, however, Canada can't deliver the oil to refineries on the Gulf Coast and, from there, to the lucrative global oil market. The Keystone XL was supposed to help resolve that issue.

When TransCanada proposed running the XL pipeline through the Sandhills of Nebraska, a delicate ecosystem, it hit a snag. All pipelines — even the most advanced like TransCanada's — eventually leak, and a few years ago, cattle ranchers said they were concerned the new pipeline would destroy the Ogallala aquifer. The Ogallala is one of the largest aquifers in America, and a primary water source for farmers and ranchers in seven states who raise cattle, wheat and corn.

Nebraska's Republican governor initially sided with the ranchers. Last August, he wrote a letter to President Obama, asking him to deny TransCanada a permit to build Keystone XL.

"When I wrote that letter, we were trying to get their attention to say look, we don't want it to go through the Sandhills," Gov. Dave Heineman says. "Probably the only option at that time was to deny the permit."

Heineman says if the Keystone XL could bypass the Sandhills, it could be an opportunity for both his state and the country.

"When you've got an 8.3 percent unemployment rate in America and we're trying to have energy independence, to me this was a no-brainer. We should have moved forward with the project," he says.

Supporters of the pipeline argue more oil from Canada means the U.S. would rely less on oil from places like Venezuela and Saudi Arabia.

A Rancher Fights Back 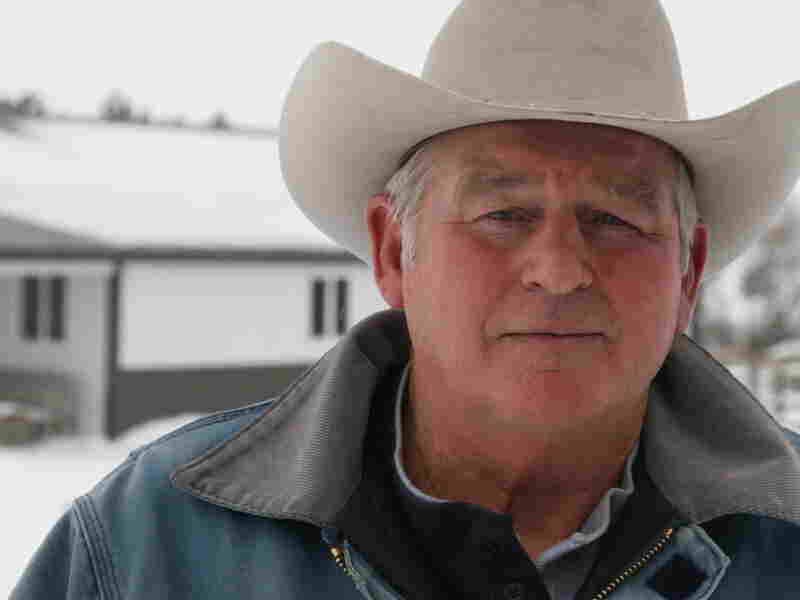 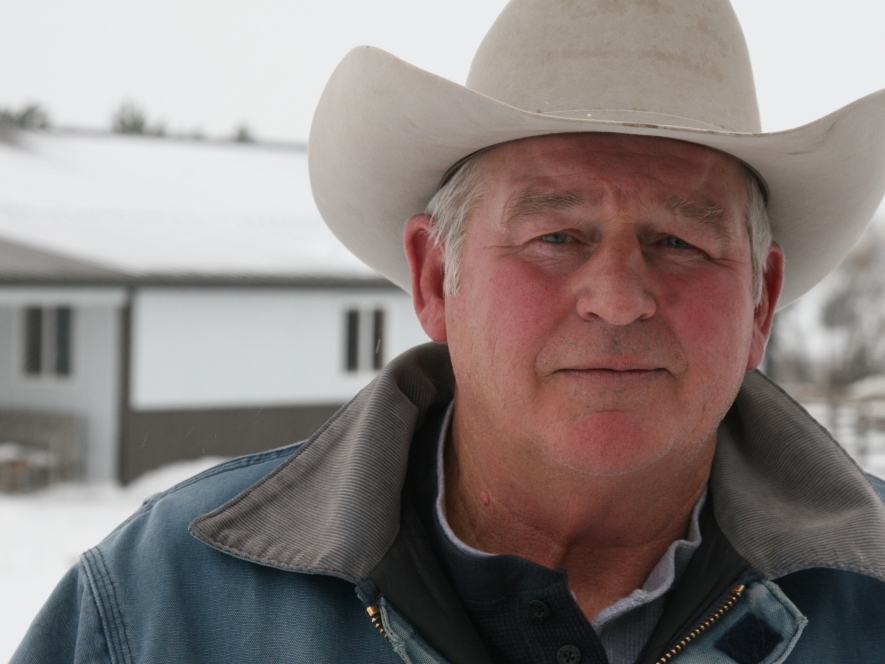 Rancher Randy Thompson is fighting to keep the Keystone XL pipeline from being built in Nebraska.

Because of his vocal opposition to the pipeline, Randy Thompson has become a symbol in the state. There are signs all across Nebraska that feature his face and read, "I Stand With Randy."

Four years ago, Thompson was contacted by an agency representing TransCanada that said the pipeline could cross his land.

"He just said ... we're wondering if we could have permission to come on and do some surveying," Thompson says.

TransCanada wanted Thompson and other affected landowners to sign over the rights to parts of their land in order to build the pipeline.

In 2010, TransCanada sent a letter to his 92-year-old mother, who co-owned the land with him. The gist of the letter was if they refused to cooperate, Keystone would use eminent domain to acquire an easement.

A letter from TransCanada sent to Randy Thompson's mother.

Thompson was stunned that a foreign company could potentially take over his land. But Robert Jones, TransCanada's vice president, says the company was following normal procedure.

"The Keystone pipeline system was under construction in 2010 and we were absolutely considering the precedent in the past, anticipating a presidential permit shortly," Jones sy.

Thompson and other ranchers thought the tone of the letters was unnecessarily aggressive, but the letters had the opposite effect on other landowners.

"I had a neighbor told me, said, these guys are way too big," Thompson says. "There's no need to fight them. Just as well sign and get it over with. So he signed the easement right away." 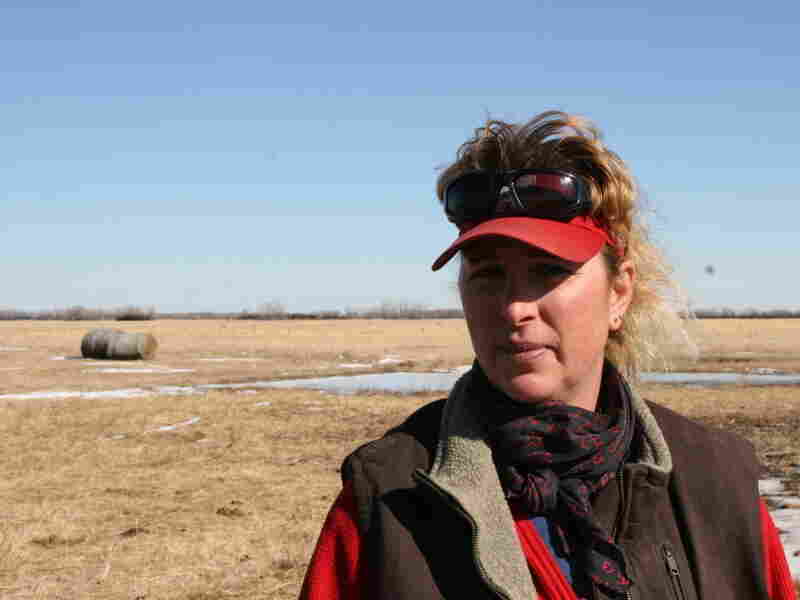 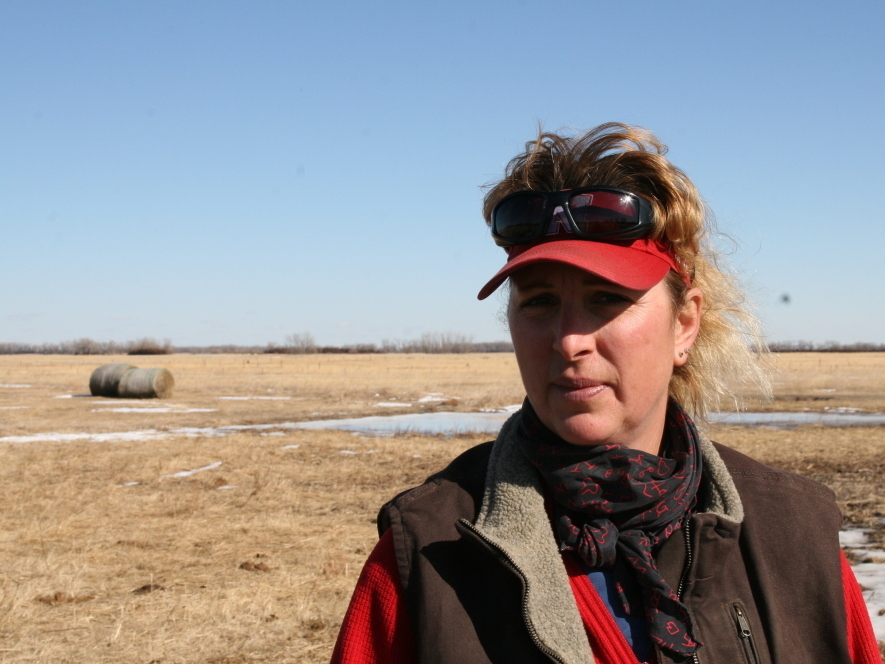 Luebbe says she worries the pipeline would ruin her land.

Another rancher, Sue Luebbe, lives right in the heart of the Sandhills. The water table on her land is so close to the surface, you need to dig down only two feet to hit the aquifer.

One afternoon four years ago, she noticed a helicopter hovering over her land. Inside the cockpit were two surveyors working on behalf of TransCanada.

The chopper terrified Luebbe's cattle, causing a stampede that sent them into a barbed-wire fence. Luebbe got on the hood of her pickup truck and pointed a rifle at the helicopter.

"I saw both of them and I also gave them some sign language. They kind of understood," she says. "So they took off as fast as they could."

She says she refused an $18,000 offer from TransCanada to build the pipeline on her land. Like Thompson, she's joined Bold Nebraska, a group that's made it its mission to stop the Keystone XL.

TransCanada says it will submit a new proposal to the U.S. government next year. The proposed route, the company says, won't go through the Sandhills.

But now, Thompson and other ranchers are convinced the whole enterprise is bad for the environment and a raw deal for Nebraska.

Thompson says remembering his parents' perseverance through the Great Depression and droughts drive him. If they were able to survive those hard times, he says, he can get through this.

"I know what my folks went through to get a piece of ground. And these sons of bitches come along and they tell me we're going to take this land away from you whether you want us to or not," he says, "and they got a fight on their hands."

Heineman says he's sympathetic, but only to a point.

"The fact of the matter is we're still going to be using coal and oil for a long period of time. Hey, I'm a supporter that we need to move to cleaner coal technology and those things," he says, "but it is not going to happen overnight."