Accessibility links
What Happens If The Keystone XL Pipeline Isn't Built? Arguments raised by supporters and critics of the proposed pipeline are based on different sets of facts: lots of jobs vs. few; lower gas prices vs. higher ones; an environmental catastrophe vs. the realities of human consumption. What is clear, though, is that both sides are determined to win. 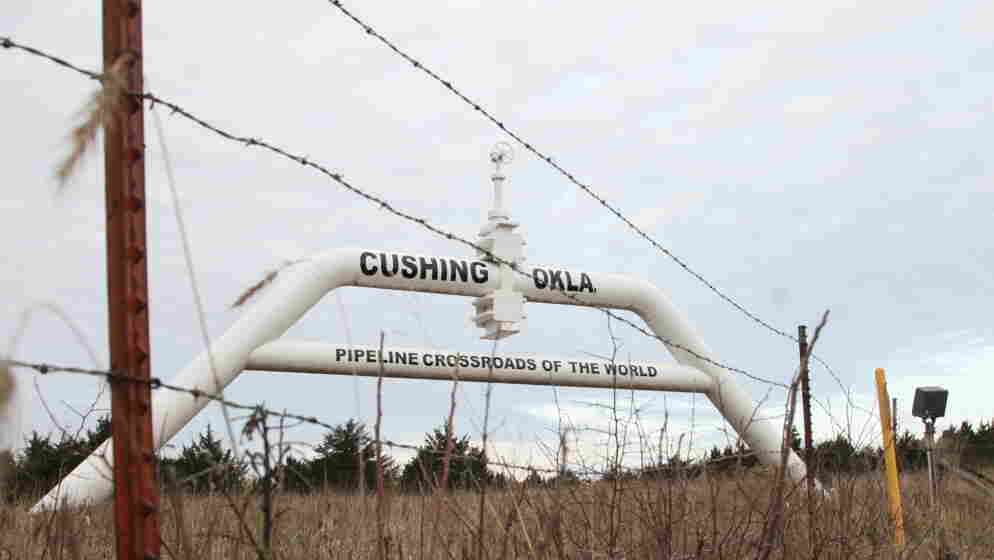 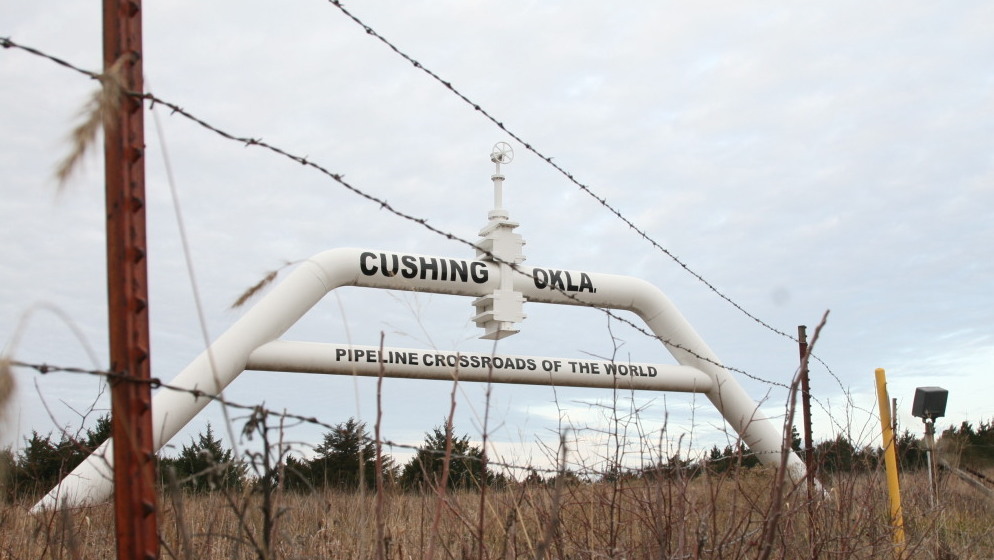 Gas isn't like a rare bottle of wine that fetches a high price just because it's rare. But at the same time, no one can agree what drives gas prices. Demand for gasoline in the U.S. is at its lowest point in more than a decade; domestic oil production is at an eight-year high.

There's no simple explanation for why most people are spending $3.60 for a gallon of regular, unleaded gas. But many critics of President Obama's energy policy point to one possible reason: The U.S. isn't fully tapping into the potential supply from Canada and, specifically, a place called the Athabasca Tar Sands in Alberta.

Some are looking to a controversial proposal as a solution: the Keystone XL pipeline.

There are consequences if the Keystone XL isn't built, but there are also issues if it never becomes a reality.

"If Canada can't produce this oil, we'll have higher oil prices than we otherwise would," says Michael Levi, senior fellow for energy at the Council on Foreign Relations.

Late last month, Obama rejected a plan by Calgary-based TransCanada to build a pipeline that would cross seven states and transport up to 700,000 barrels of Canadian oil a day to refineries on the Gulf Coast.

"The Keystone XL pipeline helps make sure that this resource can be developed if it's economically needed," Levy says. "And so that's good for the U.S. economy."

Obama doesn't necessarily oppose the pipeline, but he denied TransCanada the permit to build it because he argued there wasn't enough time to study its environmental impact. The company plans to file a new proposal next year.

At the center of the Keystone XL debate is Cushing, Okla, the pipeline crossroads of the world. There are miles of giant white oil tanks across the town. 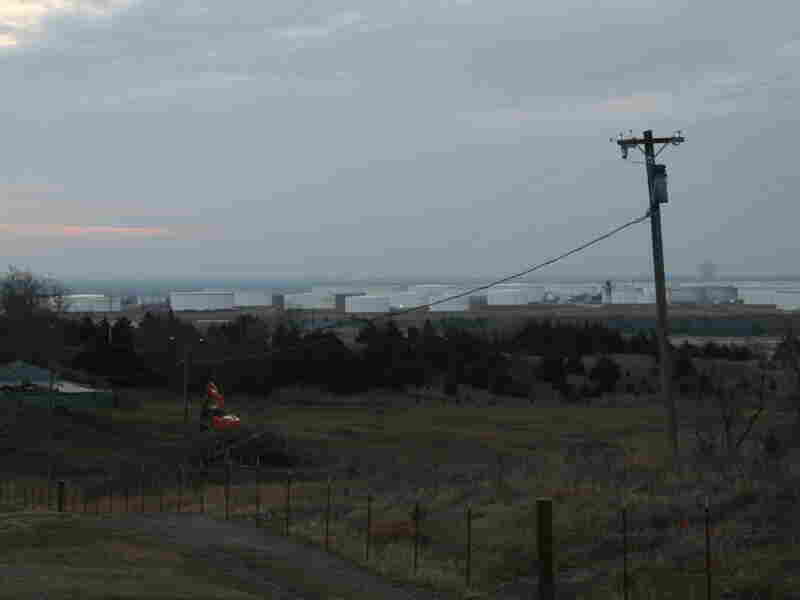 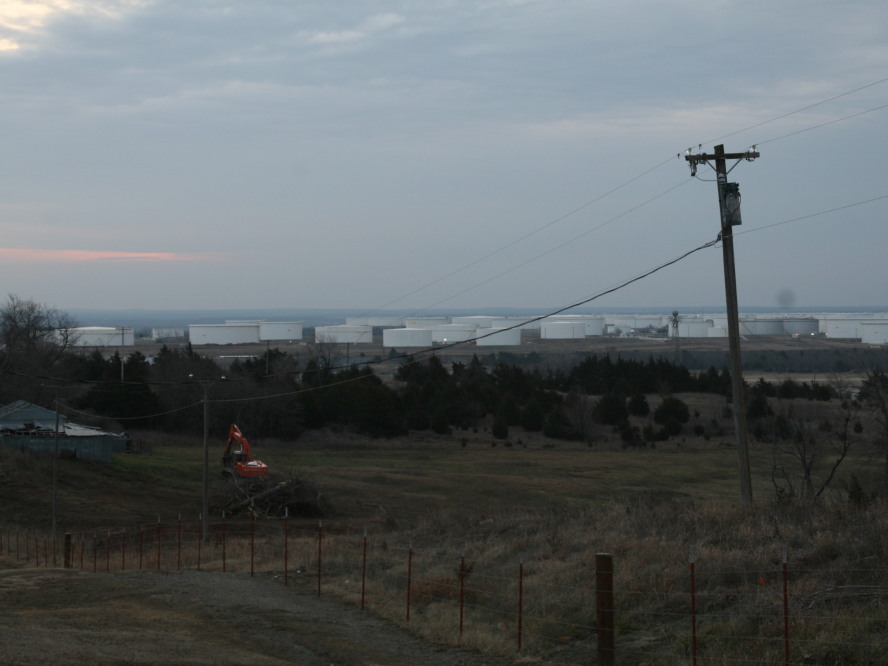 Giant oil tanks like these stretch for miles in Cushing.

Cushing might be one of those rare places in the U.S. where the economic recession seems to have passed. Business is booming. It's so good that Pete Schwiering, chief operating officer of an oil storage company called Rose Rock Midstream, is adding a few new tanks on his tank farm. Each tank is capable of storing 250,000 barrels of oil.

Soon, Schwiering's tank farm will be capable of storing 2 million barrels a day, about 10 percent of all the oil consumed in America in a single day.

"I've been in this business 42 years and I've never seen activity out there on the production side like what's happening right now," he says.

There is so much oil coming into Cushing that there's actually a glut, which translates into big business for the storage companies. But what might be good for people like Schwiering is bad for pipeline companies like TransCanada. There are lots of incoming pipelines, but not enough outgoing ones.

Some of the oil moves to refineries in the Midwest where it's turned into gasoline. But its not happening fast enough and now, there's a bottleneck in Cushing.

The Case for Jobs

The Keystone pipeline starts in Alberta, travels almost 2,000 miles and ends in Cushing. It was completed last year, but can only handle the flow of half a million barrels of oil a day from the Tar Sands in Alberta, which make up the second-largest proven oil reserve in the world.

Now, Canada wants to send more than twice that amount down to the Gulf Coast refineries where it can potentially be traded on the lucrative global oil market. In order to do that, TransCanada wants to build a second pipeline, known as Keystone XL, which Obama rejected last month. TransCanada's argument for building it is twofold, says Robert Jones, the company's vice president.

He says it'll create thousands of jobs, a figure disputed by other independent analysts. The second point, Jones says, is that it puts the U.S. in charge of its own energy production.

"When you look at the premise of the project and why the project was created—which is to serve the public and the public interest — it is solely that the U.S. is less dependent on foreign sources of oil from Venezuela or OPEC," says Jones, referring to the Organization of Petroleum Exporting Countries, a bloc of the world's top oil-producing nations.

It's a compelling argument. If only the U.S. could buy more oil from Canada, it wouldn't have to buy as much from potentially hostile countries in the Middle East, Africa and Latin America.

But TransCanada is a pipeline company, not an oil company. There's no guarantee that once refined on the Gulf Coast, that oil would stay in the U.S. If oil companies can make more money selling it overseas, then it just comes down to business.

Then there's the issue with Canadian crude oil. It's heavy. 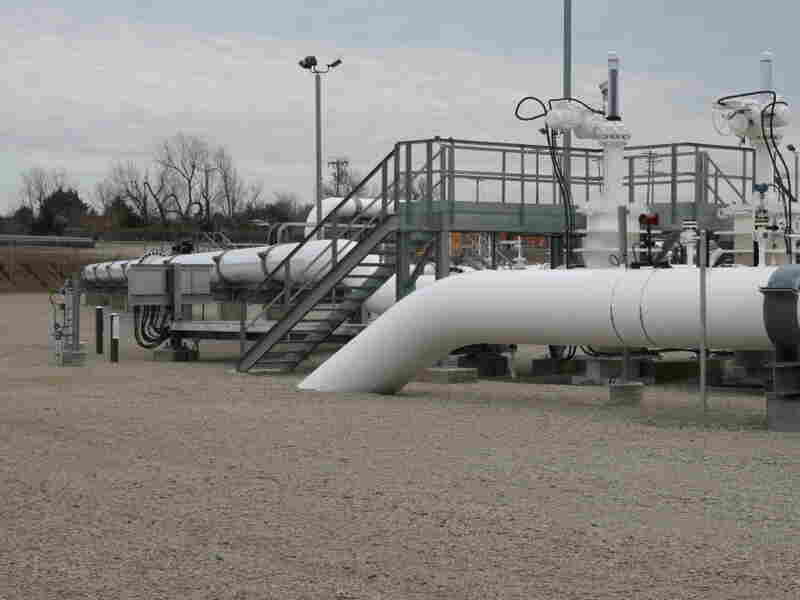 "They won't tell us what's in the oil to make it flow," says Randy Thompson, a Nebraskan cattle rancher who's opposed Keystone XL.

He's successfully spearheaded a campaign to halt the construction of Keystone XL through the ecologically sensitive Sandhills of Nebraska that lie atop one of America's largest underground aquifers.

TransCanada claims that its proposed Keystone XL line will be the safest of its kind ever built.

"I believe we can absolutely build pipelines with new technology that are getting closer and closer to being leak free," Jones says.

Just Beginning Of The Debate

But for many environmental activists, the heart of the debate isn't about the Keystone XL pipeline. It's about the source of the oil it would carry.

Last year, James Hansen, a NASA scientist, wrote that if the Alberta Tar Sands continue to be mined for oil, it's "game over for the climate."

"Keystone XL will be by far the biggest push in terms of plumbing those tar sands, building the infrastructure to fully exploit them," says McKibben, who led a demonstration of anti-Keystone XL protesters in front of the White House last November.

In order to get crude oil from the tar sands, it needs to be heated up. Scientists estimate that process produces up to 80 percent more atmospheric carbon than traditional drilling in places like Saudi Arabia and Oklahoma.

McKibben sees this progress as a sign to keep the oil in the ground.

"Sooner or later, hopefully sooner, we have to start getting off fossil fuel. And this is a very good place to start. We need to keep carbon out of the atmosphere," McKibben says. "That's the bottom line."

McKibben and other opponents of Keystone XL say they believe that if they can prevent its construction, it could dramatically slow down the mining at the Canadian Tar Sands.

The arguments raised by the two sides are based on different sets of facts: lots of jobs vs. a few; lower gas prices vs. higher ones; an environmental catastrophe vs. the realities of human consumption. What is clear, though, is that both sides are determined to win.