Accessibility links
U.S., Iran Eye Each Other Warily In Persian Gulf The U.S. and Iran sparred over oil shipments in the Persian Gulf in the 1980s, a confrontation known as the tanker war. The current tensions have some parallels, but there are concerns any hostilities could quickly escalate.

U.S., Iran Eye Each Other Warily In Persian Gulf

U.S., Iran Eye Each Other Warily In Persian Gulf 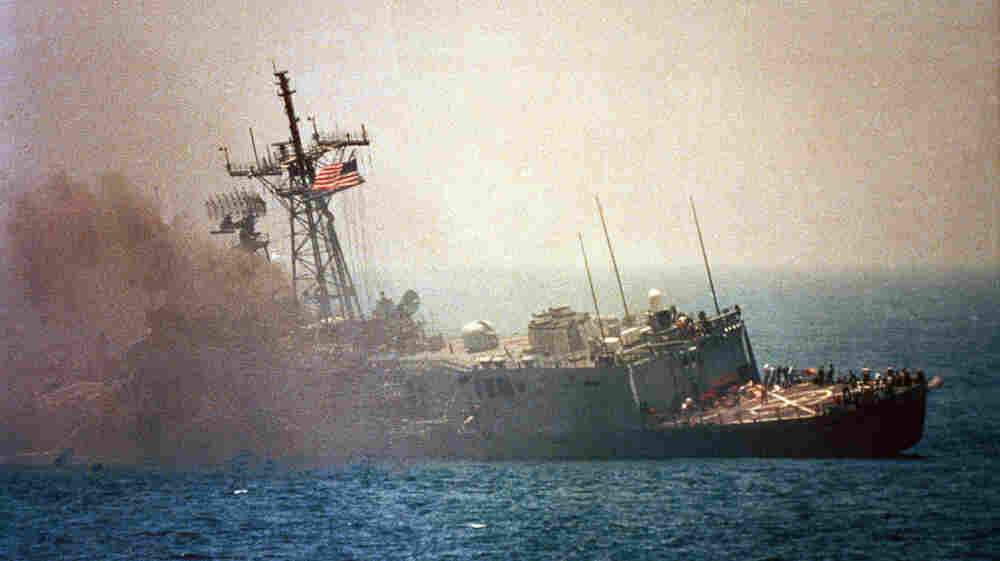 An Iraqi jet fired missiles that hit the USS Stark in the Persian Gulf in 1987, killing 37 U.S. sailors. Iraq and Iran were at war at the time, and the U.S. wanted to keep open the regiion's vital oil shipping lanes. The current friction between the U.S. and Iran has again raised tension in the Gulf. U.S Navy/AP hide caption 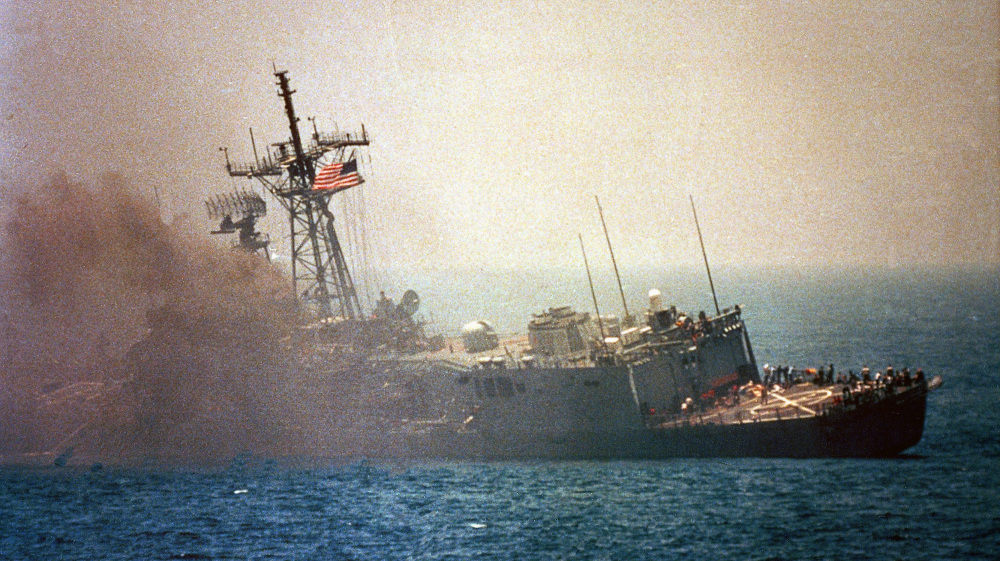 An Iraqi jet fired missiles that hit the USS Stark in the Persian Gulf in 1987, killing 37 U.S. sailors. Iraq and Iran were at war at the time, and the U.S. wanted to keep open the regiion's vital oil shipping lanes. The current friction between the U.S. and Iran has again raised tension in the Gulf.

History never repeats itself exactly. But the current escalation in tension and rhetoric between the United States and Iran has revived memories of the Persian Gulf tanker war of the 1980s.

As an offshoot of the war taking place back then between Iran and Iraq, the U.S. offered protection to Kuwaiti ships carrying oil through the Strait of Hormuz. This led to attacks on multiple military and civilian ships. In addition, the U.S. Navy in 1988 shot down an Iranian airliner that was mistaken for a jet fighter.

Despite the killing of 290 civilian passengers and crew members, the episode did not lead to any major escalation in hostilities between the U.S. and Iran.

"One of the lessons from it is that things don't have to spiral out of control," says Lawrence Korb, a former Defense Department official who is now a senior fellow at the Center for American Progress. "We did make a terrible mistake, but it did not lead to anything catastrophic."

Of course, the circumstances and the political actors have changed over the past quarter century. Today, Israel warns that it may take action against Iran's nuclear program, while Saudi Arabia and a number of other Arab states have tense relations with Iran.

Also, the global economy has become more integrated, meaning that potential disruptions in the flow of oil would have broader consequences, says Eric Davis, a political scientist at Rutgers University.

"One of the few ways Iran has to apply pressure on the United States is it could increase the tension to such an extent that the cost of shipping going through the strait would be so high that the price of oil would spike dramatically, affecting our national elections, our economy and Europe's economy," Davis says.

The Threat To Tanker Ships

Iran and Iraq were engaged in a ground war through most of the 1980s. That conflict spread into the Persian Gulf, with attacks on oil refineries and shipping. Kuwait, then an Iraqi ally, suffered the worst of the attacks from Iran, so the U.S. Navy agreed in 1987 to protect ships flying the U.S. flag.

But one of the lessons Iran took away from that engagement was that it could "conduct a war of attrition, rather than entering into a direct conflict," says Anthony Cordesman, a defense analyst at the Center for Strategic and International Studies.

For all its bluster about shutting down the Strait of Hormuz, Iran can focus its attacks across a much wider sphere, harassing ships not just in the Persian Gulf but the Gulf of Oman and the Arabian Sea as well, Cordesman says.

And Iran has learned several tactical lessons not just from the tanker war but from the subsequent American wars with Iraq, he says, regarding matters such as the use of floating mines and oil slicks.

"The Iranians clearly felt they learned from this, which we can see because of the buildup of the naval branch of the Revolutionary Guards," Iran's elite military force, Cordesman says. "Their acquisition of smart mines builds at least partly on that experience."

Iran has stepped up its efforts in recent months at "probing," or coming close enough to U.S. ships in the area to do surveillance.

There is heavy traffic in the area among small vessels, known as dhows, that engage in trade or smuggling. Many of them are taking advantage of the big blind spots in front of aircraft carriers to come close and conceivably be checking them out. 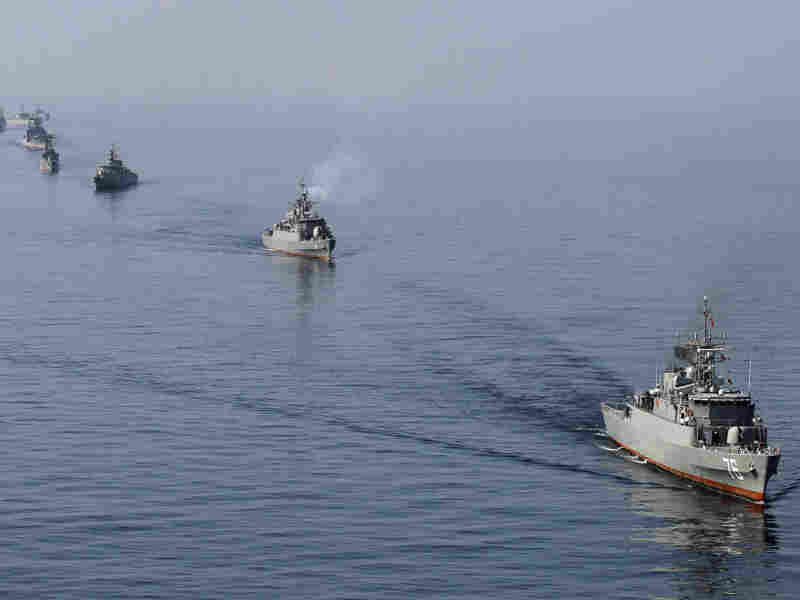 Iranian Navy boats take part in exercises in the Strait of Hormuz this past January. Amid the current tension with the West, Iran has threatened to close the strait, a major export route for oil coming from the Middle East. Ebrahim Noroozi/AFP/Getty Images hide caption 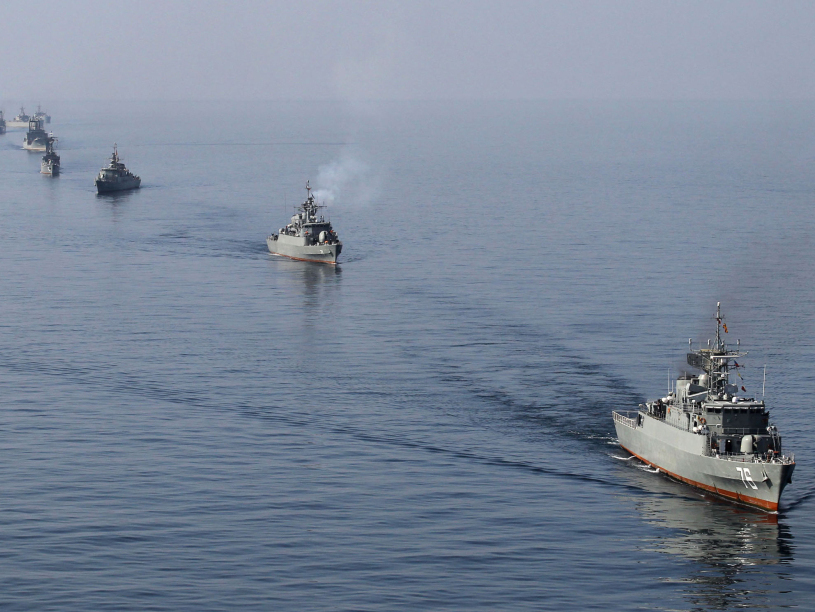 Iranian Navy boats take part in exercises in the Strait of Hormuz this past January. Amid the current tension with the West, Iran has threatened to close the strait, a major export route for oil coming from the Middle East.

"It's a form of conditioning, what they're doing," says James "Ace" Lyons, who was commander in chief of the Pacific Fleet during the 1980s tanker war. "Who's to say the next one won't be a suicide ship, with a loss of lives on our sides?"

Lyons and other retired admirals are calling for a "moving sanctuary" around U.S. ships, meaning other vessels could not come closer than a kilometer (0.6 miles) or so.

But that would raise questions about international law and how such exclusion zones could be enforced, says Michael Rubin, a resident scholar with the American Enterprise Institute and an instructor of senior officers as a lecturer with the Naval Postgraduate School.

Still, there's no question sailors and pilots aboard U.S. aircraft carriers and other vessels are increasingly concerned about becoming targets, Rubin says.

"What the Navy guys see is the Iranians getting more bold," he says. "They're worried that ultimately they're the ones who are going to pay the price."

Naval personnel, along with many others, are concerned that the U.S. will be pulled into conflict with Iran if Israel decides to launch an attack against that country.

That would create a very different scenario compared with the 1980s. Back then, U.S. involvement was an offshoot of Iran's war with Iraq. Today, Iraq is largely an ally of Iran.

One of the lessons from it is that things don't have to spiral out of control.

Lawrence Korb, former Defense Department official, talking about the tanker war between the U.S. and Iran in the 1980s

"They don't have Iraq as an opponent; they do see sanctions as crippling their economy," says Cordesman. But he cautions that trying to suss out Iranian intentions at this point is practically an exercise in "mind reading."

American calculations would be different if conflict opened up, as well. Back during the 1980s, one reason the U.S. took on the role of protecting civilian tankers was to keep the Soviet Union away from the job.

"With the end of the Cold War, we don't have to worry about the Soviets," Rubin says. "Arguably, there is less restraint on our end."

During the tanker wars, despite mishaps on all sides, lines were more clearly drawn than they are today, says Davis, the Rutgers political scientist.

"All the parties knew what was acceptable and not acceptable," he says. "Today, if there is some effort to influence the Strait of Hormuz by using mines or disrupting traffic, the whole Gulf is going to be affected."