Accessibility links
To Get Out The Vote, Evangelicals Try Data Mining The company United In Purpose is going through personal data — from magazine subscriptions to NASCAR ticket purchases — to identify unregistered Christian conservatives and sign them up. UIP hopes to sway the 2012 elections by signing up 5 million new voters. 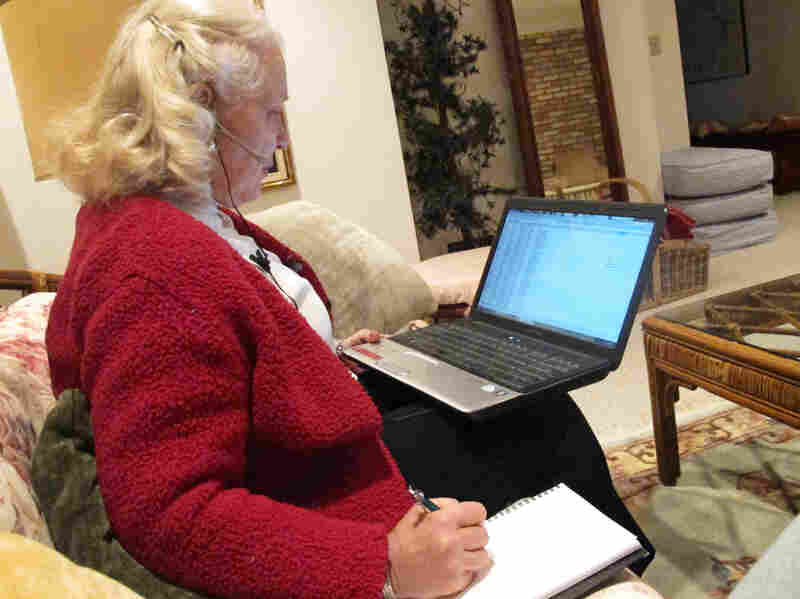 Kay Clymer spends hours each day urging fellow Christians to vote. She finds their phone numbers through a database created by the company United In Purpose. Steve Brown/WOSU hide caption 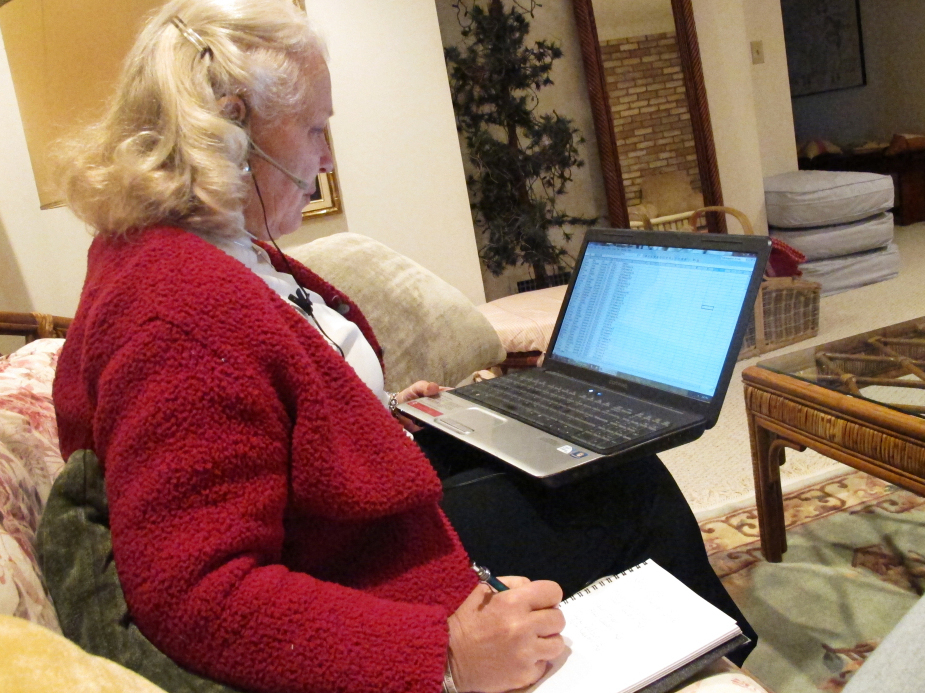 Kay Clymer spends hours each day urging fellow Christians to vote. She finds their phone numbers through a database created by the company United In Purpose.

When Bill Dallas first heard that 15 to 20 million Christians in the U.S. are not registered to vote, he couldn't believe it.

"Initially, it surprised me. And then I thought to myself, 'Wait a minute, I'm not registered,' Dallas says. "Why wasn't I registered? Well, because I didn't think my vote made a difference."

Dallas, an evangelical Christian, has since become a voter. He now runs United In Purpose, a nonprofit startup company that uses data mining to identify unregistered Christians.

The company persuaded wealthy Silicon Valley conservatives to help fund the creation of a database of as many adults in the U.S. as they can find. So far, UIP has added 180 million.

"If [your score] totaled over 600 points, then we realized you were very serious about your faith," Dallas says. "Then we run that person against the voter registration database. ... If they were not registered, that became one of the key people we were going to target to go after."

Dallas hopes UIP will register 5 million conservative Christians in the next year — a number he believes could help decide the 2012 presidential race. He points out that in 2008, key states such as Florida, North Carolina and Missouri were won by very small margins — much smaller than the number of unregistered Christians in those states.

To that end, United In Purpose is working with volunteers from organizations such as the Family Research Council to make calls and knock on doors.

The volunteers are called "champions," and Scott Spages, an evangelical Christian and political activist in Davie, Fla., was an early adopter. Electing moral leaders, he says, is a "biblical mandate." So when the Family Research Council came to his church to urge champions to use the new data mining technology, Spages promptly signed up. 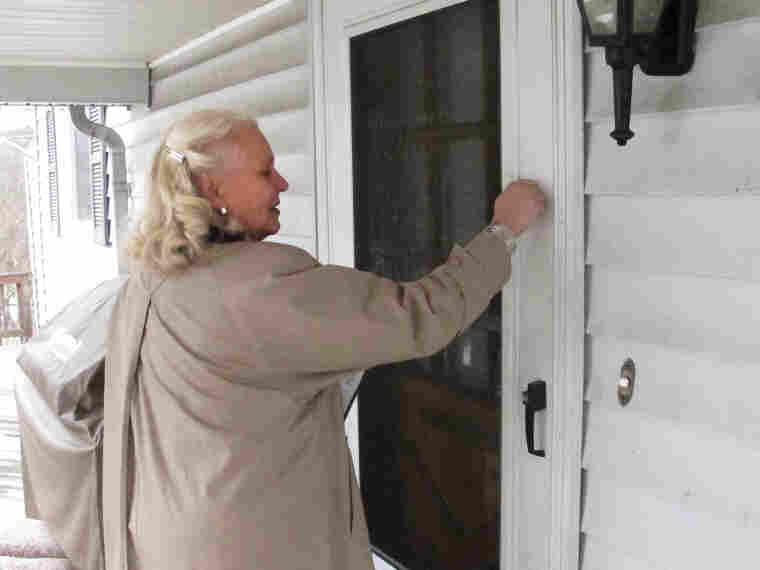 Clymer knocks on doors in Ohio in an attempt to encourage Christians to register to vote. Steve Brown/WOSU hide caption 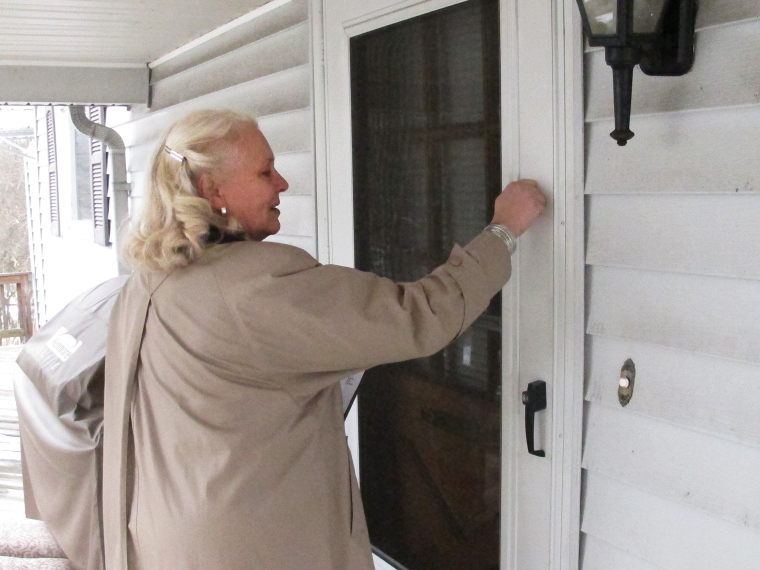 Clymer knocks on doors in Ohio in an attempt to encourage Christians to register to vote.

"God says that when the righteous rule, the people rejoice, and when the wicked rule, the people groan," Spages says. "So as Christian[s], we are specifically called upon by the Bible and by God to raise up our leaders."

Spages wants to bring that message to his Christian neighbors, so on a recent evening he went into his office, logged onto a website that uses the United In Purpose database and entered his address.

The database finds unregistered Christians who live near him — about 15 names within a couple of miles. The website gives him a script to read, along with several ways to reach his target audience: phone number, email and address. Spages prints out the addresses and heads off, Google maps in hand.

The first person on Spages' list lives in a gated community. The guard won't let him through, so he makes a phone call. He identifies himself and asks if he can speak to Orlando, who — according to UIP's database — is not registered to vote. Spages listens, then says, "Oh, OK. So, Orlando and everyone in the house is registered? OK."

Puzzled, Spages drives to the next house. There, too, everyone is registered. It happens again at the next house and the next, so when Spages reaches Brenda Jacobson to ask if she wants to register, he's not surprised by her answer.

"Well, I'm registered, so I'm not sure why my name showed up," she says.

"We found that a lot tonight," Spages responds, "so I'm going to have to double check that."

As it turns out, all of the names on the Florida list are registered voters — a mistake that United In Purpose discovered after NPR's reporting. In South Carolina and Iowa, the UIP lists also contained registered voters.

But in Ohio, the database worked perfectly. And Kay Clymer, a Tea Partier and evangelical Christian from Zanesville, was eager to use it. Clymer, 67, spends several hours each day on the phone urging people to register and vote. She says she can't remember a more critical election.

"I do strongly, strongly believe that the Lord's totally in control," she says. "I pray for a Red Sea experience like he did with the Egyptians — and then wash those people out that don't belong in office. And that's what keeps me going."

She knocks on the door of a neighbor who's been identified as an unregistered Christian. A woman answers, and Clymer makes her pitch.

More On Evangelicals And Politics

"Are you registered to vote?" she asks.

"I'm not, but my husband is," the woman responds.

"No. I wouldn't waste my time on any of them," the woman says.

At the next house, the reception is a bit more prickly.

"I'm sorry, they're all crooks and you'll never be able to blame me," the woman says, declining the registration form Clymer offers.

"I'm just trying to get Christians to go out and vote," Clymer protests.

"Well, I'm a Christian, but that's as far as this is going to go," she says, and closes the door.

"I wish at least one person would take it," she laments.

But no one takes a registration form that afternoon.

Dallas, the head of United In Purpose, was embarrassed to learn the organization had botched the list in Florida. And he's philosophical about voter apathy — even antipathy — in Ohio.

"When you look at all these factors," Dallas says, "you realize what a herculean effort this is — to try to bring in a large group of new voters into the voting population."

United In Purposes' experiment shows the promise and peril of having a bottomless well of data to draw upon: Accessing it is one thing — using it effectively is another thing entirely.