Accessibility links
In A New Setback, Syrian Opposition Splits With shells pound opposition fighters and civilians in Syria, the main opposition group has lost some of its most prominent members, who are forming a new organization. 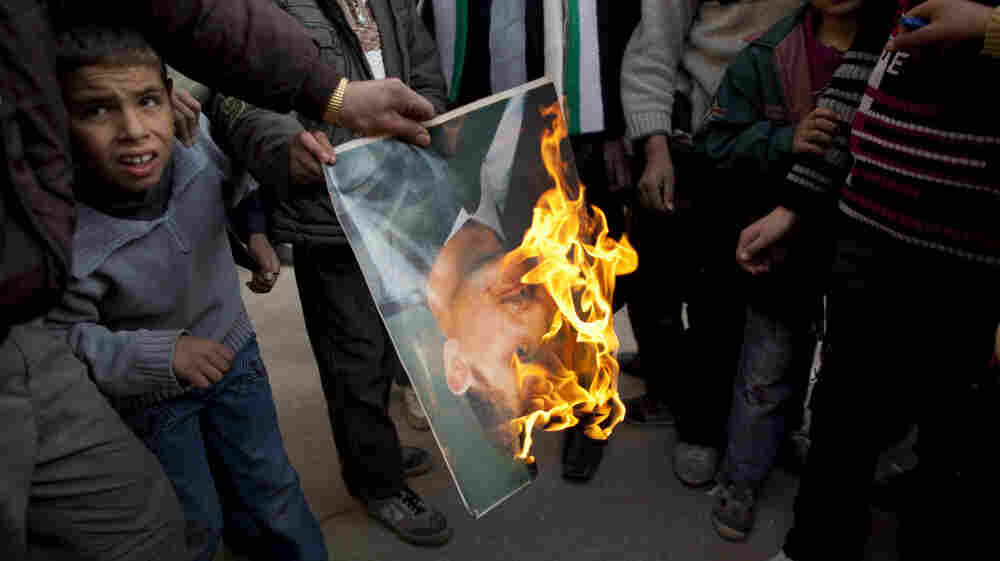 A man burns a portrait of Syrian President Bashar Assad during a Sunday demonstration on the outskirts of Idlib in northern Syria. Rodrigo Abd/AP hide caption 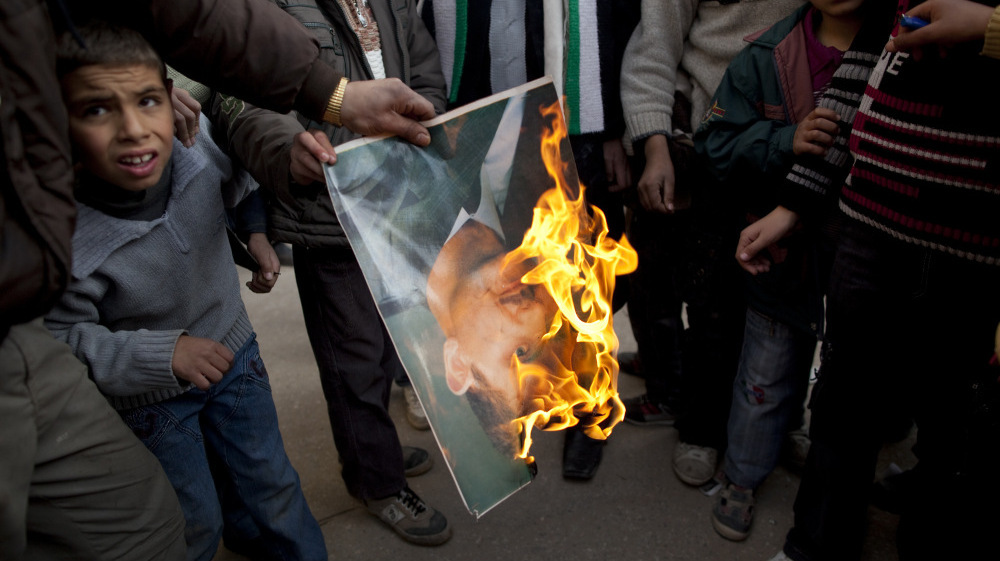 A man burns a portrait of Syrian President Bashar Assad during a Sunday demonstration on the outskirts of Idlib in northern Syria.

Monday was a rough day for the opposition in Syria. Senior officials in the main opposition group announced that they're forming a new organization. The development was the latest sign of the divisions within the Syrian opposition that's trying to oust the government of President Bashar Assad.

At the same time, Assad's government said that nearly 90 percent of voters endorsed constitutional reforms in a referendum a day earlier, even though the Syrian opposition and international critics called the balloting a farce.

The most urgent news from Syria continues to come from the central city of Homs. One video posted online appears to show an assault on the besieged neighborhood of Baba Amr.

With no progress reported on a humanitarian cease-fire, Syrian opposition fighters, wounded civilians and Western journalists remained trapped for another day. Another video showed a young boy apparently killed by deep shrapnel wounds.

Away from the battle zone, the news was of more disunion and frustration. A group of well-respected opposition figures announced a split from the main Syrian National Council to form a new organization called the Syrian Patriotic Group. 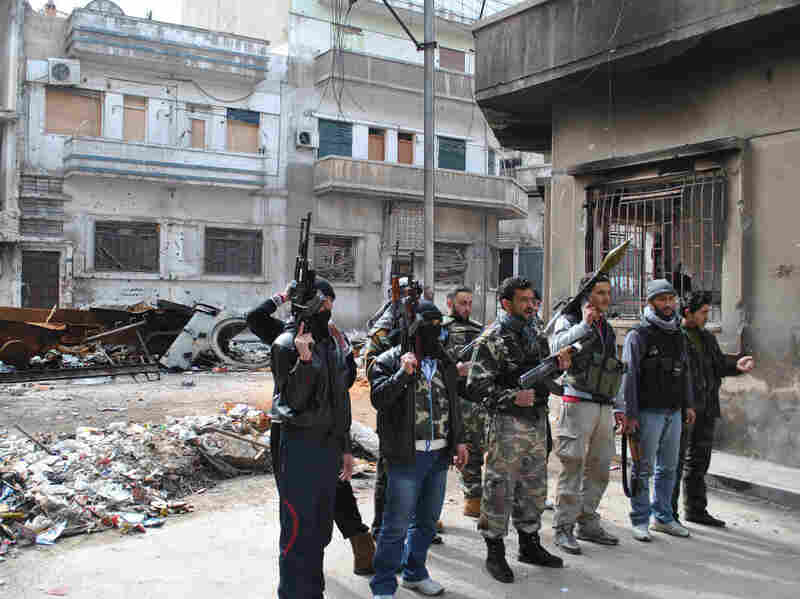 Syrian rebels gather in front of a Syrian government military vehicle that was destroyed during clashes in the central city of Homs on Feb. 23. The city has been the scene of the heaviest fighting in recent weeks. STR/AP hide caption 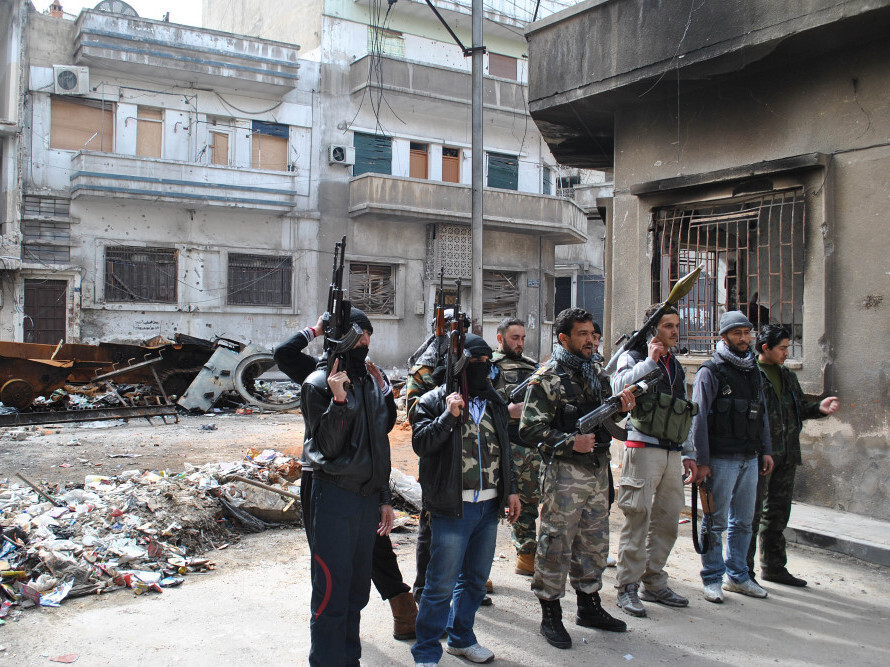 Syrian rebels gather in front of a Syrian government military vehicle that was destroyed during clashes in the central city of Homs on Feb. 23. The city has been the scene of the heaviest fighting in recent weeks.

Led by attorney Haitham al-Maleh, Kamal al-Labwani and others, they said the new group would try to help defend Syrians against what Labwani called "this killing regime."

Analyst and author Andrew Tabler, with the Washington Institute for Near East Policy, says the exiled opposition leaders in SNC have never felt the same pressure to unify as the activists inside Syria who are facing a daily artillery barrage.

Reached by phone in Jordan, Labwani told NPR that although the new group isn't necessarily opposing the SNC, the internal bickering has to stop. He also believes the Muslim Brotherhood has too strong a role within the council.

Also Monday, the Red Cross reported that for the first time in a month an aid mission got into the central city of Hama, delivering food and supplies for 12,000 people for a month. Geneva-based spokesman Hicham Hassan told NPR that talks on access to Homs are continuing.

In the Baba Amr neighborhood of that city, an activist using the name Abu Bakr said he hopes that the new opposition group forces everyone to get together before it's too late to save the revolution.

"This Syrian Patriotic Group was formed because the National Council is far from the pulse of the street," he says. "But we hope they will learn to work together to lead the revolution, not walk behind it the way they do now."

The government, meanwhile, announced an 89 percent approval for constitutional reforms put to a referendum Sunday. The interior minister was quoted as saying turnout was good, despite what he called "armed terrorist groups" in some areas.

Member of the opposition, however, dismissed the referendum as a sham.