Accessibility links
Human Rights Victims Seek Remedy At High Court On Tuesday, the U.S. Supreme Court hears two cases testing how American law intersects with international law. One case involves a lawsuit against Royal Dutch Shell Oil, which is accused of aiding and abetting the Nigerian government in committing atrocities in the 1990s. 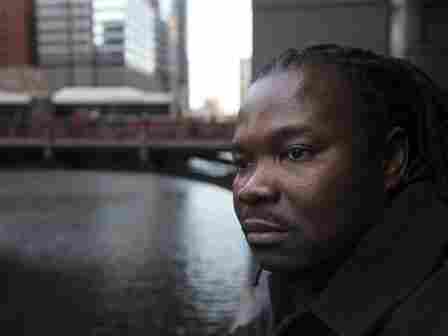 Charles Wiwa fled Nigeria in 1996 following a crackdown on protests against Shell's oil operations in the Niger Delta. Now a resident of Chicago, Wiwa and other natives of the oil-rich Ogoni region are suing Shell for human rights violations. Charles Rex Arbogast/AP hide caption

Human rights are front and center at the U.S. Supreme Court on Tuesday in two cases testing how American law intersects with international law. At issue in both cases is whether foreign nationals in the United States can sue corporations or other entities in U.S. courts for alleged violations of human rights.

The case that has corporate teeth chattering is a lawsuit against Royal Dutch Shell Oil, which is accused of aiding and abetting the Nigerian government in committing atrocities in the 1990s.

The suit was brought by 12 Nigerian citizens, all of whom have been granted political asylum in the United States. They are natives of the Ogoni region of Nigeria where Shell Oil has conducted oil exploration for decades.

In the mid-1990s, local religious, student and civic leaders began demonstrating peacefully against Shell, protesting that their farmland was being ruined by oil spills and that Shell contributed nothing to the local economy and did not pay for cleanup or environmental protection.

Soon, the protest leadership was being rounded up, tortured and even killed. Those who survived, fled, including Charles Wiwa, who says that after he led a rally in his home village, he was picked up and beaten by 18 soldiers before a crowd of thousands at an open-air market.

"They started beating me — horsewhipping me, clubbing me, [kicking me with their] boots for a really long time," Wiwa says. The beating lasted more than two hours.

There were more beatings, he says, and eventually he was charged with unlawful assembly. Released on bail, he says there were two attempts to abduct him.

"When it was obvious that my life was at risk, I fled Nigeria," Wiwa says.

For the past 16 years, Wiwa has lived in the United States. Now in Chicago, where he works as an export consultant, he is among the Ogoni refugees here who have doggedly pursued Shell, contending that the oil company worked hand-in-glove with the Nigerian military to brutally suppress any opposition to the way the company operates.

Among the others bringing charges is a Seventh-day Adventist bishop and a local leader's widow, who was raped and beaten after her husband was arrested and summarily executed.

They started beating me — horsewhipping me, clubbing me, [kicking me with their] boots for a really long time.

Their lawsuit against Shell is based on the Alien Tort Statute, a law enacted in 1789 by the first U.S. Congress and aimed mainly at pirates. The statute says U.S. trial courts can hear civil damage suits brought by a foreign national for wrongs "committed in violation of the law of nations or a treaty of the United States."

The statute remained largely unused until 1980, when victims of human rights abuses began using it against foreign individuals and corporations. In 2004 the Supreme Court, by a 6-3 vote, upheld the application of the law to human rights abuses, but only for a limited category of crimes — torture, genocide and crimes against humanity. The court said that in modern times the torturer has become like the pirate and the slave trader of earlier times, "an enemy of all mankind."

Unresolved, however, was who could be sued. The case the court ruled on involved a lawsuit against an individual. This case asks whether the victims of such crimes can sue corporations.

Lawyers representing the victims maintain that historically there is a quid pro quo for corporate status. In exchange for the many benefits of incorporation, including limited liability, corporations are responsible for the actions of their employees, known in legalese as their agents.

"All that we're saying in this case is that when a corporation contributes to genocide or crimes against humanity, that they should be held liable ... the same way they would be held liable if one of their agents is engaged in an automobile accident that injures somebody" on the job, says Paul Hoffman, who is representing the Nigerian victims.

Shell declined to comment for this story, but former U.S. State Department counsel John Bellinger, who filed a friend-of-the-court brief on behalf of a half-dozen multinational corporations, contends "that international law binds nations and individuals, but not corporations," and that neither this law nor international law allows American judges to adjudicate actions that have occurred in other countries and "that have absolutely nothing to do with the United States."

Backing Shell are more than two-dozen multinational corporations, business groups, and even several countries — Germany, the Netherlands and the United Kingdom. They say that if the Supreme Court rules that corporations can be sued under the Alien Tort Statute, it will exacerbate what they characterize as the existing flood of litigation.

Human rights lawyer Hoffman disputes that characterization, noting that the number of cases filed under the Alien Tort Statute against corporations has been only about a few a year. "There has never been a flood," he says. "At most, there's been a trickle."

The U.S. government, the United Nations High Commissioner for Human Rights and numerous human rights organizations have filed briefs supporting the victims' argument that the Alien Tort Statute does allow for corporate liability.

Azzam Rahim was born on the West Bank and immigrated to the United States in the 1970s, where he became a U.S. citizen. He owned various small businesses in Texas, got married and had six sons. In 1993, after the Oslo Accords established a Palestinian self-governing authority, Rahim often visited his home village.

He was with his 20-year-old son, Asid, at a cafe when an unmarked car with four men pulled up. They identified themselves as police and told Rahim that they needed him to come identify some stolen jewelry.

"That was the last time I saw my father alive," Asid says.

Two days later, an ambulance delivered Rahim's body to the family. His teenage son, Shahid, now a policeman in Texas, remembers the scene with horror.

"The first thing I saw was cigarette burns all over his body," Shahid says. "The bottom of his feet, his chest, his stomach, his hands." His face and body were badly bruised, and his ribs broken.

The ambulance driver told the family Rahim died of a heart attack, but the family says an autopsy showed no heart damage. And a U.S. State Department report classified the death as an extrajudicial killing and confirmed that Rahim died while in the custody of Palestinian Authority intelligence officers.

The family sued the Palestinian Authority and the PLO under the Torture Victim Protection Act, a law that was enacted in 1992 in response to a federal appeals court ruling that gave the PLO immunity from such suits. The family refers to the death as "a mafia-style" execution.

Decisions in both cases are expected by summer.