Accessibility links
Michigan Primary A Test Of Mitt Romney's Family Legacy There is much at stake for Mitt Romney in Tuesday's presidential primary in Michigan — and not just because he's in a close race with Rick Santorum. Romney has close personal ties to the state where his late father, George Romney, was a popular governor. The younger Romney will find out if that history can help his presidential bid.

Michigan and Arizona hold presidential primaries Tuesday, and in Michigan, where Mitt Romney was born, the race has been as hard-fought as anywhere in the country.

For Romney, the campaign there has been personal. He often evokes the Michigan of his youth, when his father, George, ran American Motors and went on to become a very popular three-term governor.

But does that family legacy mean anything today?

If you were to go to a Romney event in Detroit or Kalamazoo or Traverse City, you'd be almost guaranteed to hear some Romney family history.

"When Dad ran for governor in 1962, I went in a little Ford van and I was not 16 yet, so there was another guy with me that drove," Romney said at a recent event. "We went from county fair to county fair; I think we visited that year all 83 Michigan counties."

In modern Michigan politics, George Romney looms large. He was an innovative auto executive who helped lead a movement to rewrite the state constitution and modernize state government. Eventually, he became governor. 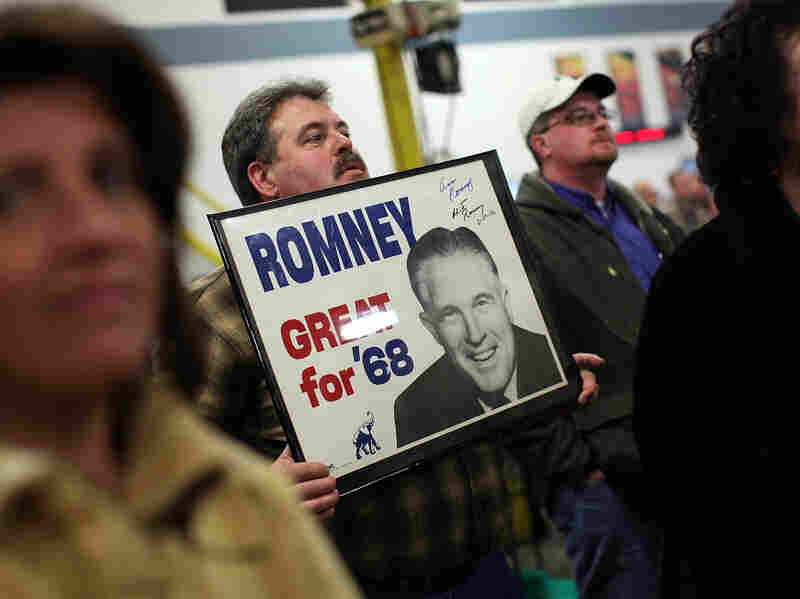 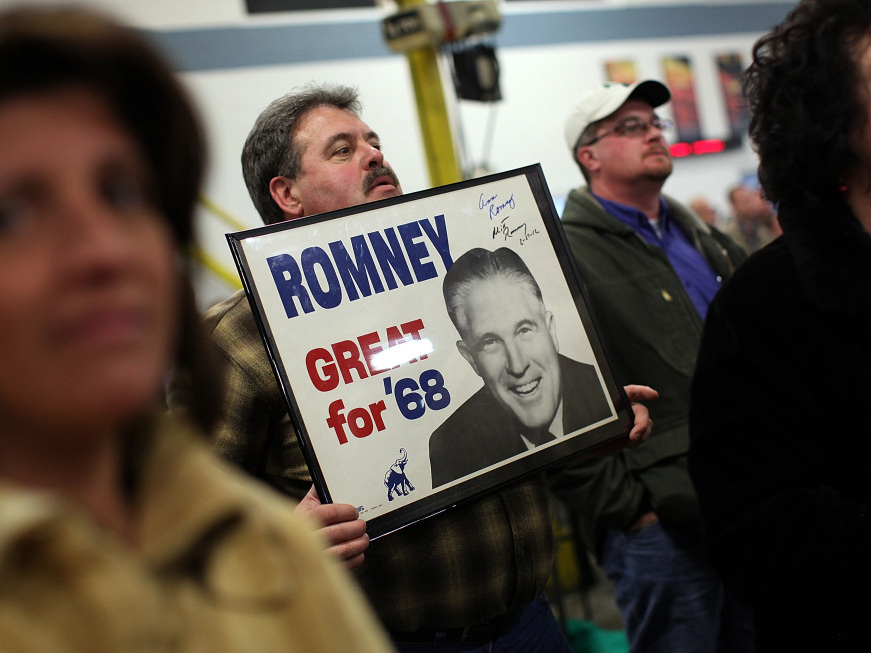 "If we are to succeed in our complex objectives, we will need such a bipartisan consensus and dedication — one born in modern terms, on the basis of modern current human and social needs," George Romney said in his second inaugural address.

It is not unusual to feel the presence of George Romney at Mitt Romney's events. In Shelby Township, a 95-year-old man stands and tells the candidate a story about his dad. Another, Tim Booth, holds up a vintage campaign poster that reads: "Romney — Great for '68."

"I was born and raised in Michigan [but] I don't have a lot of recollection of George Romney, to be honest with you," Booth says. "In 1968 I was 7, so it's just the history of the state."

Booth is a fan of the 2012 Romney as well. He says Mitt Romney is not just a hometown hero but can be one for all Americans.

But the younger you are, the less the name means. At a Rick Santorum speech at the Detroit Economic Club, David Smith, a 41-year-old financial planner, says he just doesn't have the "warm fuzzies" for Romney.

Polls show that is the more typical sentiment; after all, George Romney left office in 1969 and died in 1995. Bill Ballenger, who publishes the newsletter Inside Michigan Politics, cites a recent survey where just 26 percent knew that Mitt Romney is a Michigander.

"Otherwise they didn't even know he had a connection with Michigan," Ballenger says. "But guess what: 26 percent is a lot more than zero percent for Santorum and Gingrich and Paul; they have no connection to Michigan at all."

Last week in Lansing, three former aides to Gov. George Romney got together to talk about their old boss. Keith Molin sees one obvious difference between the father and son.

While Mitt Romney is working hard not to be called a moderate, in his day, George Romney refused to endorse 1964 GOP nominee Sen. Barry Goldwater. Some go so far as to say that if he were active in politics today, the elder Romney would be a Democrat.

"Frankly, if you were to bring George Romney forward to this day right now, and try to categorize him as liberal or moderate or conservative, I don't think you could do it," says former aide Bill Whitbeck, now a Michigan Court of Appeals judge.

On social issues, Whitbeck says he thinks Romney would be in line with social conservatives today. But on fiscal matters, he predicts Romney would not be one of those Republicans looking to starve the government.

Fred Grasman, who once lived with the Romney family, says the differences in politics and style between the Romneys are very real. Where Mitt seems cautious and reserved, George was bold and gregarious. But, Grasman says, there is a very strong connecting thread.

"They had their family to depend on, and I see that now in both senior and junior — the cohesiveness of the family and how they stick together," Grasman says.

Both men share that, and a legacy. Michigan voters will tell Mitt Romney Tuesday how much that matters.