A World Created By A Supergroup: 'Kingdoms of Amalur: Reckoning'

A World Created By A Supergroup: 'Kingdoms of Amalur: Reckoning' 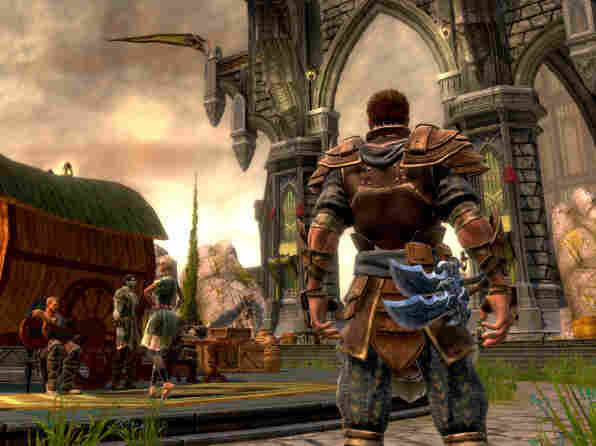 A screenshot from 'Kingdoms Of Amalur: Reckoning.' EA hide caption 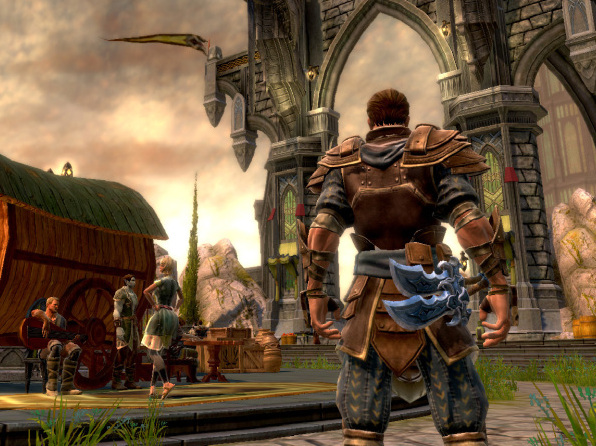 A screenshot from 'Kingdoms Of Amalur: Reckoning.'

If games were like pop music and Kingdoms of Amalur: Reckoning were an album, its makers would have been called a supergroup. Curt Schilling, the former Boston Red Sox pitcher and avid gamer, R.A. Salvatore, the best selling fantasy author, and Todd McFarlane, the comic book auteur, banded together to rock the gaming world. And then there is the team of 400 worker bees at 38 Studios and Big Huge Games, working hard for the past three years on a role playing game that was touted by Schilling to be as excellent as any ever made.

At first blush, however, I had a difficult time suspending my disbelief. Two small things took me out of this lurid world that initially looks as lush with a million shades of green as Avatar. In the opening sequence, your character dies. Like garbage, he is dropped into something called the Well of Souls. He finds himself near the top of a tall heap of expired, festering bodies and stuck under a few of them. As he pulls himself out from under the dead weight, it takes him far too much time to retch from the horrible stench of death. It's unbelievable.

And I could not figure out what the hell the Tolkien-like story was precisely about. What Salvatore and the other writers have created is something akin to a world of thousands of myths, a veritable Golden Bough in a videogame, all twelve volumes of it – plus the supplement published in 1937. I'm well over 20 hours into the game, and I'm still not quite sure what's going on.

Yet that's the point. Early on, your Lazarus-like character wakes from the dead in this strange, sprawling new world. He has no memory and no sense of self. On its face, it's the nadir of clichéd tropes. But through the eyes of this innocent, who is so curious to find out the truth about himself, the game gets better quickly.

The characters you meet in your various quests are not as realistic as those in Skyrim, one of last year's most popular role playing games. Yet there is something familiar about the individuals who populate the four races of fantasy beings you meet, especially those who make up the Fae, the mysterious fairy folk. Two of the Fae women reminded me of bartenders I know. Yes, their lips move badly to the voiceover actors' audio. But making characters that remind the player of real people can be a powerful stimulus to continue a very long and wide-ranging adventure such as this.

Playing through to completion can be a giant challenge for any gamer. Add the main story and side quests together, and you could spend 200 hours checking out Reckoning's nooks and crannies. Thankfully, the game makes the complex choices of leveling up easy and fun. Care to be a mighty brawler or a quieter magician? Want to be a master of persuasion or wielder of a powerful scepter, or both? Thoughtful game design makes it a breeze to choose.

Reckoning has been trashed by those who believe it's a banal and imitative. They say it is an alchemy that cribs from the many narrative-rich quests within World of Warcraft and the violent action of Sony's God of War series, in which bones crunch, blood sprays and eyes are gouged. But this is not a cheap replication. These gamemakers have been inspired by the work of others and have made a game that is often distinctly their own. In doing so, they have also made a role-playing experience that's friendlier to gamers who don't play for many hours each day.

Yet those mavens of gaming are in for a treat — if they allow themselves to be open enough to savor the small things that make this world come alive. For example, oval rocks called Lorestones talk to you in short monologues, and some rant with oddly charming invectives. You imagine the people inside the stones to be like the lovable freaks and dangerous urchins Weegee met in his midnight treks through the Bowery.

That said, Reckoning is not a perfect game. It could have benefited from another six months of work to polish the sprawling narrative, dialog and artwork. But when it works, it is an estimable and creditable first effort on which to build a series that may well become better and better with time.

Harold Goldberg is the author of All Your Base Are Belong to Us: How 50 Years of Videogames Conquered Pop Culture. He can be found crowdsourcing a movie about games at www.playingwithfirefilm.com.