Accessibility links
Found Time: How To Spend The 24 Hours Of Leap Day An extra day. How will you use it? Here are 24 ideas. None of them takes longer than an hour. And if you don't have time to get to everything on the list, don't worry. Maybe in 2016.

Found Time: How To Spend The 24 Hours Of Leap Day

Found Time: How To Spend The 24 Hours Of Leap Day 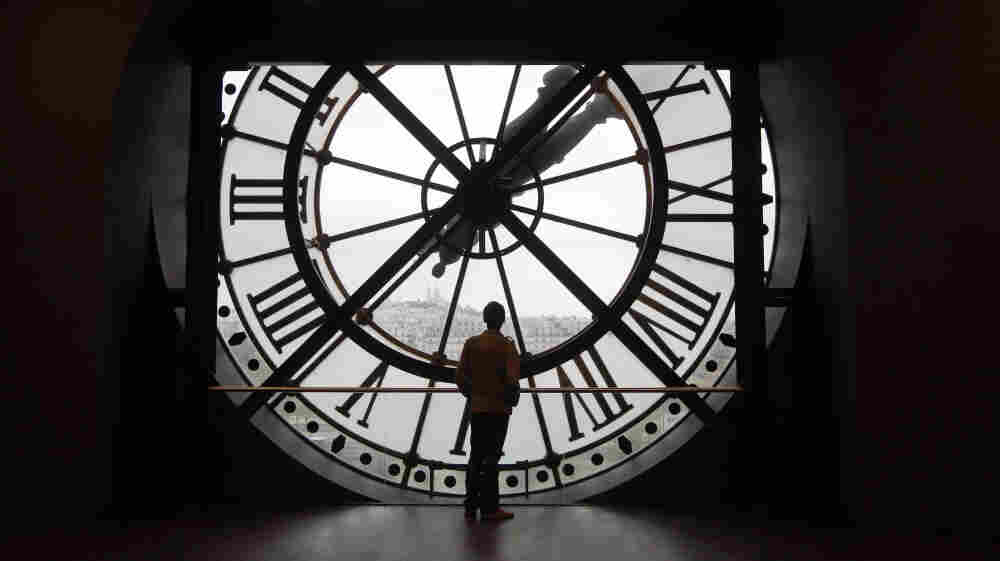 Leap day is the perfect moment to contemplate time. Here a man looks at the Seine river through the giant clock of the Orsay Museum in Paris. Pierre Verdy/AFP/Getty Images hide caption 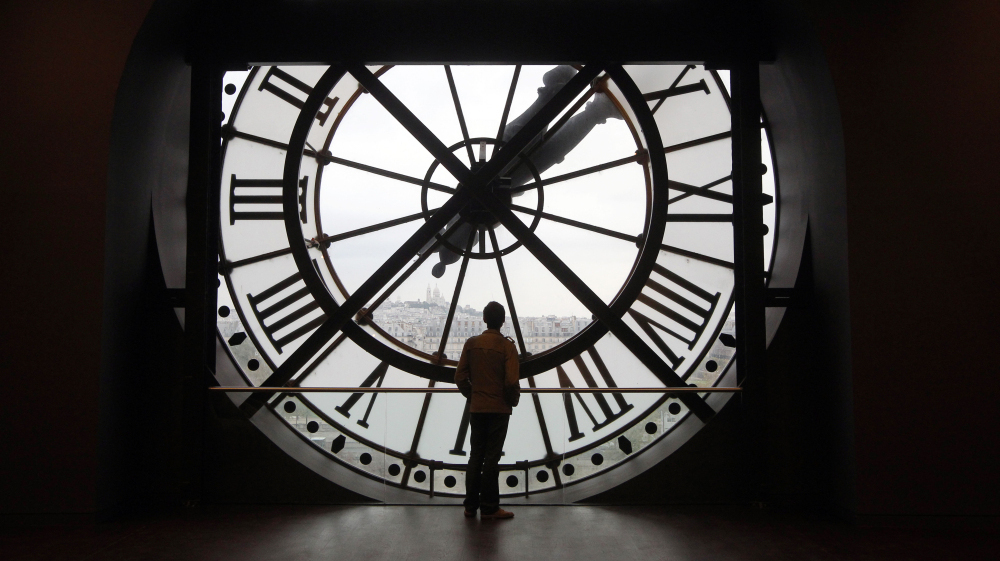 Leap day is the perfect moment to contemplate time. Here a man looks at the Seine river through the giant clock of the Orsay Museum in Paris.

Found time! An extra day. How will you use it? Here are 24 ideas. None of them takes longer than an hour. Because time is tight, time is of the essence, time is money. And if you don't have time to get to everything on the list, don't worry. Maybe in 2016.

Midnight. Too excited to sleep, you can click on the fascinating site of the Long Now Foundation, timekeepers of the 10,000 Year Clock. Computer wizard Danny Hillis first dreamed up the idea of a massive timepiece that "ticks once a year. The century hand advances once every 100 years and the cuckoo comes out on the millennium." Cultural explorer Stewart Brand helped organize the foundation — named by musician Brian Eno — that oversees the design and construction. Benefactors include Amazon founder Jeff Bezos, who has handed over $42 million to the project. The first clock is being built in West Texas.

2 a.m. Check the time on your many, many digital clocks against the Norwegian website Time and Date. "Our website is well-prepared for leap day," the site's Konstantin Bikos says. "All our calculators and calendars automatically take it into account — in most cases for all years between 1 and 3999." While you're at it, turn off the clocks you don't need, to reduce your "phantom load" — the power that is being used even though the gadget or appliance is off.

3 a.m. Pay your monthly bills. You have an extra day.

4 a.m. Think about taking the day off. According to the Huffington Post, about 17 percent of respondents to its poll say they are taking off a personal day on leap day. You can also read what other people are planning to do and see the Cheap Sally infographic that provides the skinny on leap years.

5 a.m. Check out alarm clocks on the Web. Type "weird alarm clocks" into Google Images and you will see photos of the glowing pillow alarm clock, the dumbbell alarm clock and the aromatherapeutic alarm clock. 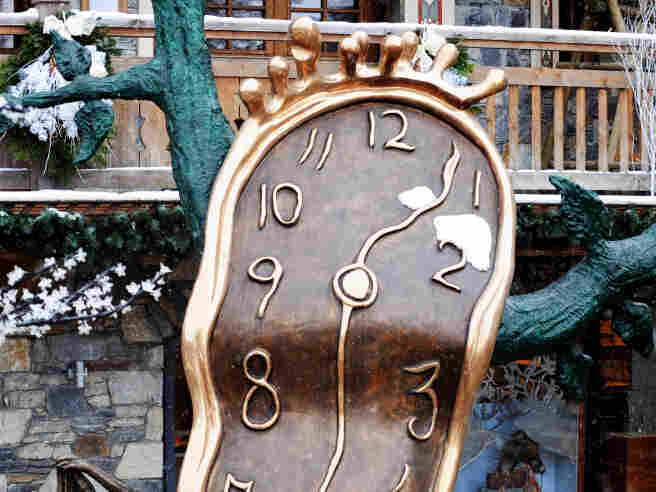 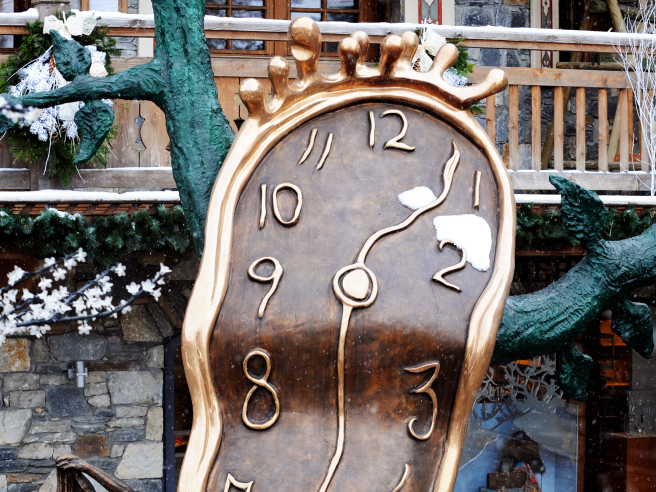 Spanish artist Salvador Dali's Persistence of Memory sculpture, displayed during an exhibition at the Courchevel ski resort in the French Savoie region, in 2010.

6 a.m. Listen to 11 Great Songs About Time, as recommended by NPR's own Bob Boilen: "Time Has Come Today" by the Chambers Brothers, "Time" by Pink Floyd, "Arc Of Time" by Bright Eyes, "One Day at a Time" by John Lennon, "Time Is On My Side" by the Rolling Stones, "Syncopated Clock" by Leroy Anderson, "Time of the Season" by the Zombies, "Time Won't Let Me" by the Outsiders, "Does Anybody Really Know What Time It Is?" by Chicago, "Time in a Bottle" by Jim Croce and "Rock Around the Clock" by Bill Haley and the Comets.

8 a.m. Fix a cup of Eight O'Clock coffee. For more than 150 years, Americans have been drinking this coffee — long before 7-Eleven, Starbucks and Dunkin' Donuts chimed in. According to the Eight O'Clock website, it was first made available as the house brand for the Great Atlantic & Pacific Tea Company — A&P — in 1859. In 1919, the name was changed to reflect the times of day when most people drank the coffee — 8 a.m. and 8 p.m.

9 a.m. Punch the time clock. You can thank Willard Bundy and his brother Harlow for the first time-recording clock for workers. In 1889 they opened a company in Binghamton, N.Y., that eventually morphed into IBM. Today Harlow's home is the Bundy Museum of History & Art.

10 a.m. Make time for a horologist. And watch out for clockmakers. You can find both on the website of the American Watchmaker-Clockmakers Institute in Ohio. "I have been repairing antique clocks for 30 years and love them," says Pulitzer Prize winning Washington Post writer, comic strip creator and amateur horologist Gene Weingarten. "It's about history; having your hands inside something that was last opened, maybe, in 1892."

11 a.m. Take in the trailer for Time Freak, a short film nominated for a 2012 Academy Award. The clever story is about a guy who invents a time machine — and no matter how often he goes back to the dry cleaners, his shirt is never ready.

12 p.m. At least, that is what it says on digital clocks. On his astronomy website, John Huggins points out that because the sun is directly overhead at noon, it is neither ante meridiem nor post meridiem. "It is simply 12 Noon," he writes. "It is unfortunate that modern electronic clocks choose to display the PM indicator just as it changes from 11:59AM to 12:00Noon. However, the fact they do does not mean they are right."

1 p.m. While out to lunch, take advantage of a February sales event — since the sale is lasting longer than usual. Like maybe a $5 footlong sandwich?

2 p.m. Back at your desk or easy chair, take a few moments to visit some time-sensitive sites, such as Timehop, a new service that reminds you what you were doing exactly a year ago, or The Time Hack, a chronicle of one man's exploration into the elasticity of time, or Time Razor, a new pre-launch site that promises to allay FOMO (the Fear Of Missing Out) on certain activities.

4 p.m. For those who enjoy the hustle and bustle of hot spots such as Times Square or Disneyland — which is staying open 24 hours on leap day — there is webcam action. For those who are not interested in the energy, there's a nap for that.

5 p.m. Enjoy, or eschew, happy hour. Outlawed in some locales, this advertised time for discounted drinks happens in many places. And when leap day falls on a weekday, there's an extra happy hour in the year. The term, according to the St. James Encyclopedia of Popular Culture, may come from a Navy tradition of end-of-day entertainment.

7 p.m. Before it gets too late, see if this BBC video helps explain the mind-bending — and time-bending — idea of the dilation of time, the theory that time runs at different rates depending on how fast you're moving.

10 p.m. Agree or disagree with Marty K's list on Yahoo of 5 of the Best Twilight Zone Episodes about Time Travel. He especially likes it when actor Gig Young becomes young again.

11 p.m. Get up and take a quick trip around the world with this recent collection of 10 time-lapse videos from Mashable. The Panama Canal (No. 6) in less than two minutes has always been a favorite.

Midnight. Set the alarm and leap into bed.