Accessibility links
Sebastian Seung: A Neuroscientist Reverse-Engineering The Brain Our brains are filled with billions of neurons. Neuroscientist Sebastian Seung explains how mapping out the connections between those neurons might be the key to understanding the basis of things like personality, memory, perception, ideas and mental illness. 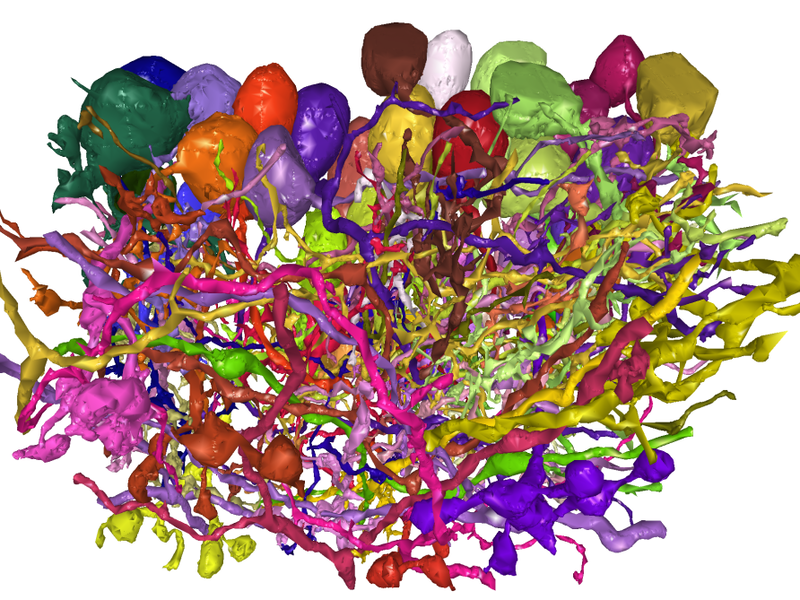 A map of neurons of the mouse retina, reconstructed automatically by artificial intelligence from electron microscopic images. A. Zlateski based on data from K. Briggman, M. Helmstaedter, and W. Denk/MIT/Seung hide caption

toggle caption
A. Zlateski based on data from K. Briggman, M. Helmstaedter, and W. Denk/MIT/Seung 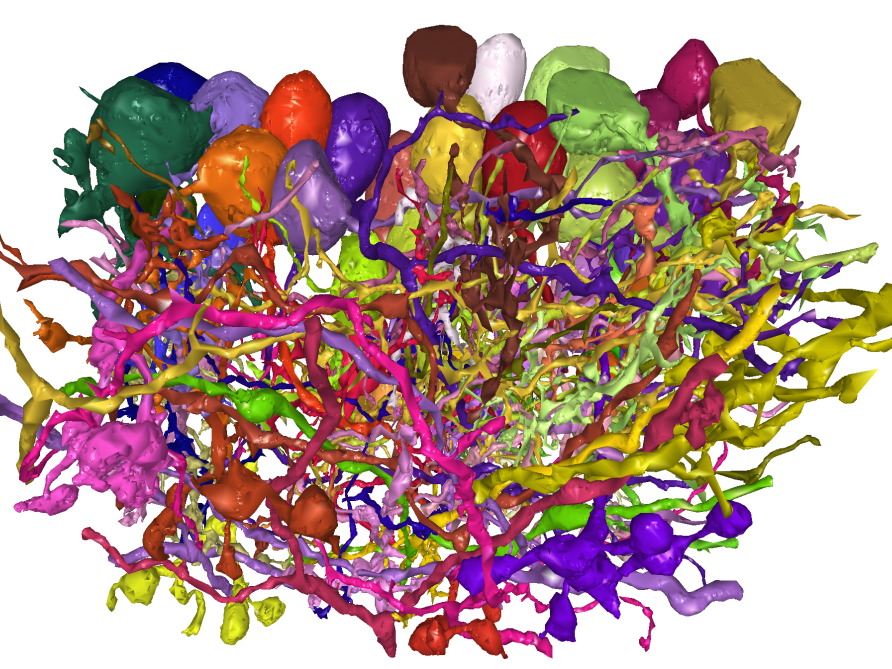 A map of neurons of the mouse retina, reconstructed automatically by artificial intelligence from electron microscopic images.

Our brains are filled with billions of neurons, entangled like a dense canopy of tropical forest branches. When we think of a concept or a memory — or have a perception or feeling — our brain's neurons quickly fire and talk to each other across connections called synapses.

How these neurons interact with each other — and what the wiring is like between them — is key to understanding our identity, says Sebastian Seung, a professor of computational neuroscience at MIT.

Seung's new book, Connectome: How the Brain's Wiring Makes Us Who We Are, explains how mapping out our neural connections in our brains might be the key to understanding the basis of things like personality, memory, perception and ideas, as well as illnesses that happen in the brain, like autism and schizophrenia.

"These kinds of disorders have been a puzzle for a long time," says Seung. "We can look at other brain diseases, like Alzheimer's disease and Parkinson's disease, and see clear evidence that there is something wrong in the brain." 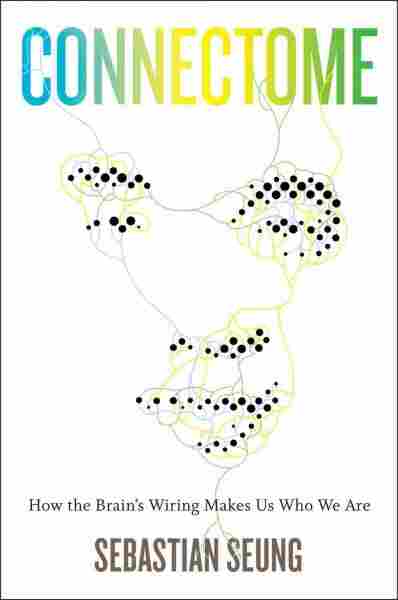 How the Brain's Wiring Makes Us Who We Are

But with schizophrenia and autism, there's no clear abnormality during autopsy dissections, says Seung.

"We believe these are brain disorders because of lots of indirect evidence, but we can't look at the brain directly and see something is wrong," he says. "So the hypothesis is that the neurons are healthy, but they are simply connected together or organized in an abnormal way."

One current theory, says Seung, is that there's a connection between the wiring that develops between neurons during early infancy and developmental disorders like schizophrenia and autism.

"In autism, the development of the brain is hypothesized to go awry sometime before age 2, maybe in the womb," he says. "In schizophrenia, no one knows for sure when the development is going off course. We know that schizophrenia tends to emerge in early adulthood, so many people believe that something abnormal is happening during adolescence. Or it could be that something is happening much earlier and it's not revealed until you become an adult."

What scientists do know, he says, is that the wiring of the brain in the first three years is critical for development. Infants born with cataracts in poor countries that don't have the resources to restore their eyesight remain blind even after surgery is performed on them later in life.

"No matter how much they practice seeing, they can never really see," says Seung. "They recover some visual function, but they are still blind by comparison to you and me. And one hypothesis is that the brain didn't wire up properly when they were babies, so by the time they become adults, there's no way for the brain to learn how to see properly."

At birth, he says, you are born with all of the neurons you will ever have in life, except for neurons that exist in two specific areas of the brain: the dentate gyrus of the hippocampus, which is thought to help new memories form, and the olfactory bulb, which is involved in your sense of smell.

"The obvious hypothesis [is] that these two areas need to be highly plastic and need to learn more than other regions, and that's why new neurons have to be created — to give these regions more potential for learning," says Seung. "But we don't really have any proof of that hypothesis."

But not everything is set in stone from birth. The complex synaptic connections that allow neurons to communicate with one another develop after babies have left the womb.

"As far as we know, this is happening throughout your life," he says. "Part of the reason that we are lifelong learners — that no matter how old you get, you can still learn something new — may be due to the fact that synapse creation and elimination are both continuing into adulthood."

Only one organism has had its full connectome — or neural map — mapped out by neuroscientists. It's a tiny worm no bigger than a millimeter, but it took scientists more than a dozen years to map out its 7,000 neural connections. They started out by using the world's most powerful knife and slicing the worm into slices a thousand times thinner than a human hair. They then put each slice in an electron microscope and created a 3-D image of the worm's nervous system. That's when the true labor started, says Seung.

"That's when [neuroscientists had to] go through all these images and trace out the paths taken by all of the branches of the neurons and find the synapses, and compile all that information to create the connectome," he says.

Each of the worm's 300 neurons had between 20 and 30 connections. In comparison, humans have 10,000 connections of neurons — and billions of neurons. And scientists still aren't sure what the various pathways in a worm's nervous system mean.

"We're still far away from understanding the worm," says Seung. He says that scientists would like to eventually map a 1-millimeter cube of a human brain or a mouse brain, which contains 100,000 neurons and a billion connections.

"The imaging of all of those slices of brain can be automated and made much more reliable," he says. "And now we have computers that are getting better at seeing."

So far, though, neuroscientists have only mapped the neural connections of a piece of a mouse retina, which is very thin.

"What we know in the retina is a catalog of the types of neurons," he says. "The next challenge is to figure out what are the rules of connection between these types of neurons. And that's where we still don't know a whole lot."

Mapping more of these connections, he says, will tell us a lot about brain function and possible pathways that can be treated.

"I don't want to promise too much, and my goal right now is simply to see what is wrong," he says. "That's not in itself a cure. But obviously it's a step toward finding better treatments. The analogy I make is the study of infectious diseases before the microscope. You could see the symptoms, but you couldn't see the microbes — the bacteria that caused disease. We're in an analogous stage with mental disorders. We see the symptoms, but we don't have a clear thing we can look at in the brain and say, 'This is what's wrong.' " 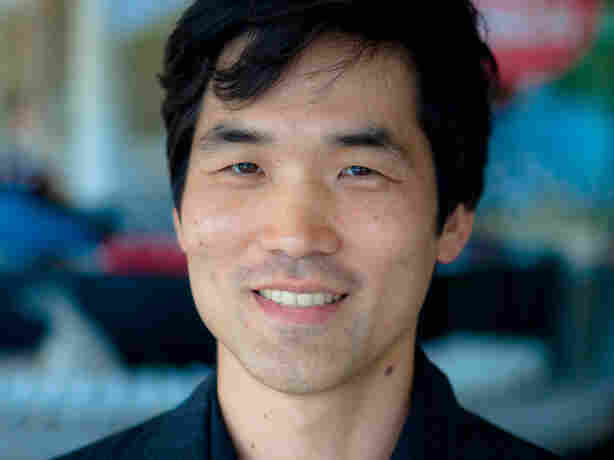 Sebastian Seung is a professor of computational neuroscience at MIT and an investigator at the Howard Hughes Medical Institute. Kris Krug/Poptech/Courtesy of the author hide caption 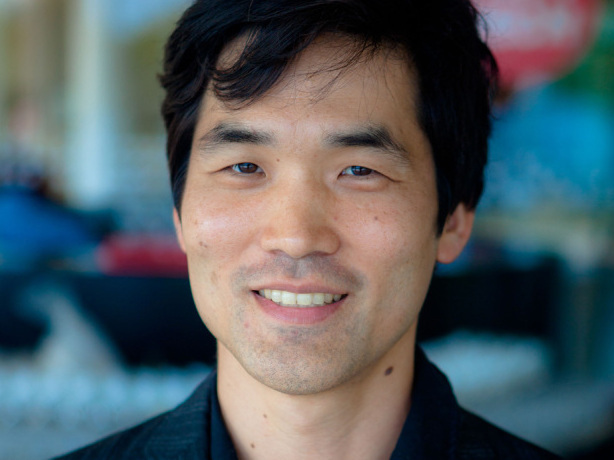 Sebastian Seung is a professor of computational neuroscience at MIT and an investigator at the Howard Hughes Medical Institute.

Kris Krug/Poptech/Courtesy of the author

"A connectome is a map between neurons inside a nervous system. You can imagine it as being like the map that you see in the back of the pages of in-flight magazines. Imagine that every city in that map is replaced by a neuron and every airline route between cities is replaced by a connection."

On the Jennifer Aniston neuron

"Sometimes people with seizures don't respond well to medications, and the only way for them to respond is for surgeons to remove the part of the brain from which the seizures originate. So [a computational neuroscientist] got permission to also record the signals of single neurons inside human subjects before doing the operating. So what the experimenters did was they showed the people pictures of celebrities and places and other kinds of objects, and they found that the neurons in the areas that they recorded from, which is in the medial temporal lobe ... responded highly selectively. They would respond to only a few pictures out of a large collection of many pictures. And in particular, there was one neuron in one person that responded only to pictures of Jennifer Aniston — not to Halle Berry, not to Julia Roberts, and one great finding said that this neuron did not respond to pictures of Jennifer Aniston with Brad Pitt. ... It would be overstating the case to say this neuron only responds to Jennifer Aniston because the experimenters didn't have time to show the person all possible celebrities. But it seems safe to say that this neuron responds to only a small fraction of celebrities." 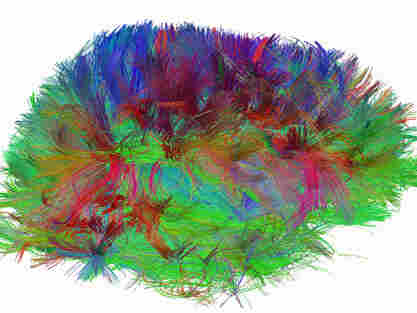 "Your brain is this vast network of neurons, communicating through signals. And as far as neuroscientists can tell, these signals that are passed around the network are reflecting the processing of all of our mental processes — your thoughts, your feelings, your perceptions and so on."

"If you have brain damage, and lots of neurons are killed, those neurons won't grow back except in [the dentate gyrus of the hippocampus, which is thought to help new memories form, and the olfactory bulb, which is involved in sense of smell]. So you could view it from a very pessimistic viewpoint. On the other hand, it's entirely possible that medical advances in the future will somehow activate regenerative powers in the brain. If these regenerative powers exist in [those] two areas, why not awaken them in other areas of the brain? So there's also an optimistic kind of spin on this."

Read an excerpt of Connectome