Accessibility links
The Fresh Air Interview: Nick Flynn Writer Nick Flynn was working in a homeless shelter in his 20s when his father — an alcoholic and self-proclaimed writer who left when Flynn was a baby — showed up as a client. His story is now a movie called Being Flynn, starring Paul Dano and Robert De Niro. 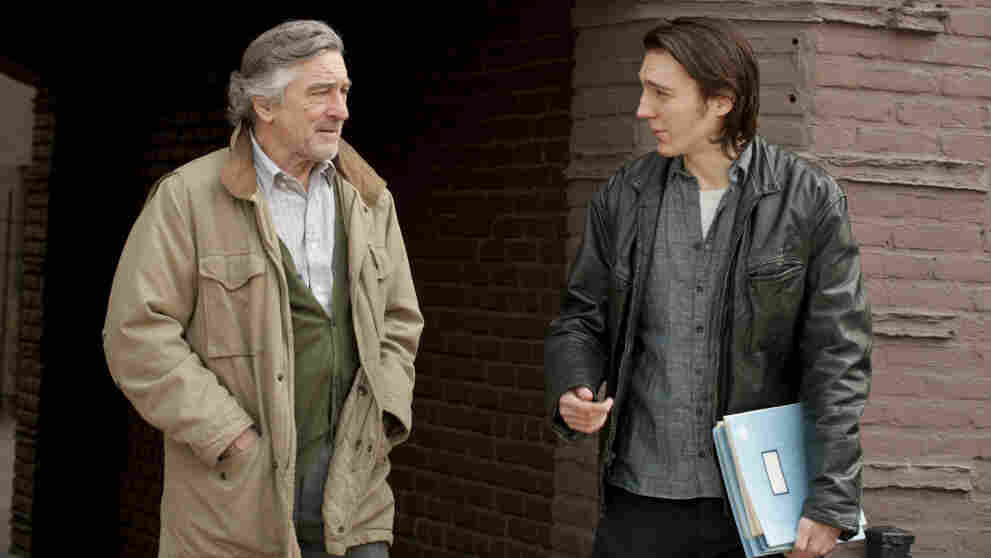 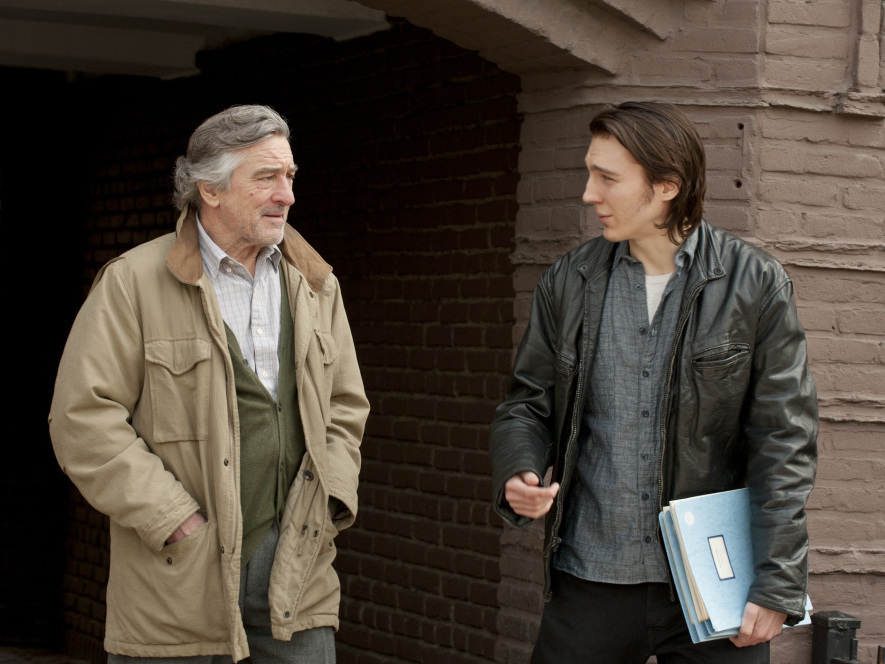 Writer Nick Flynn was working in a homeless shelter in his 20s when his father — an alcoholic and self-proclaimed writer who left when Flynn was a baby — showed up as a client. Flynn wrote about the experience in his 2004 memoir, Another Bulls- - - Night in Suck City.

That story is now a movie called Being Flynn, starring Paul Dano as the young Nick Flynn and Robert De Niro as his father, Jonathan. 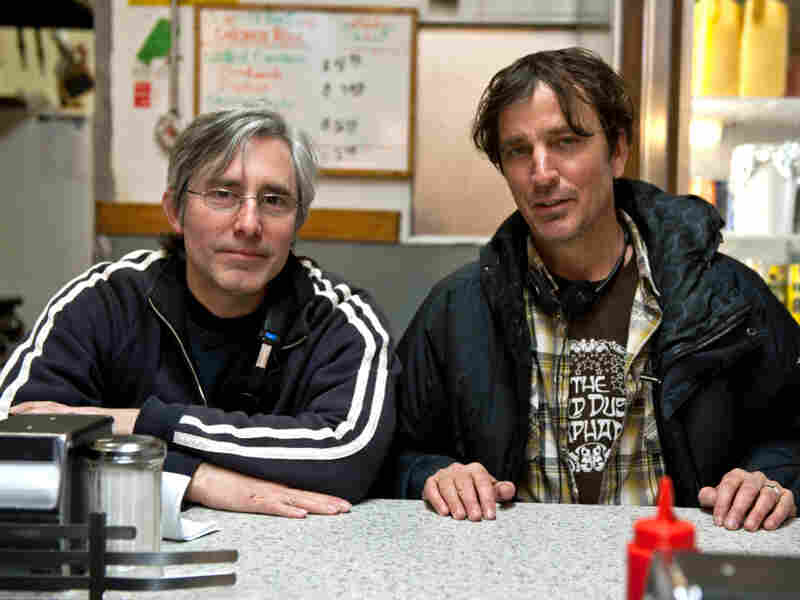 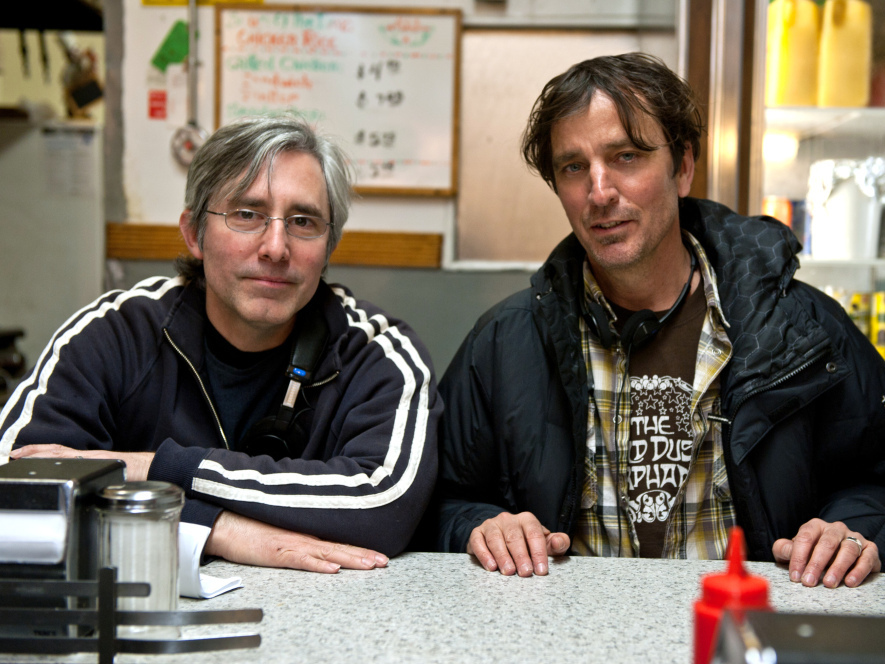 Flynn and Paul Weitz, the film's director, tell Fresh Air's Dave Davies that the film boils down to a few important themes.

"One of them was whether we're fated to become our parents," Weitz explains. "And eventually, how much of their flaws do we have to own in order to move on with our lives?"

Weitz says he also was interested in the intersection between creativity and ego.

"Nick's father, Jonathan Flynn, states in the beginning of the movie that he's one of three great writers that America has produced: Mark Twain, J.D. Salinger and Jonathan Flynn. And he had this vision of himself as a great artist. And while that ego consumed him in some way, it was also interesting that Nick said that [Jonathan's] sense of self probably is what helped him survive."

Jonathan Flynn spent most of his life working odd jobs, but also spent a fair amount of time in federal prison. He started writing letters filled with advice to his young son while he was locked away for robbing a bank.

"Occasionally they were profound and filled with insight — advice on how to be a writer, even though he knew nothing about me and didn't know I wanted to be a writer at that point," Flynn says. "But they were a little loopy, too. And they got crazier as they went on. ... Many of the letters did end with the phrase 'and soon I shall be known.' He really put all his chips into the idea of becoming famous.' "

Nick never wrote back to his father, out of respect for his mother, he says. Two years after she took her own life, Nick began working at a homeless shelter in Boston, near where his father moved after his release from jail. Nick was 24.

"I was young and quite lost and grieving," he says. "I'm not sure why working at a homeless shelter made sense to me, except that I needed to immerse myself in some sort of larger real-life situation to get me out of the cage of my mind, in some ways."

Three years later, his father showed up at the shelter. Nick says he knew his father was always living on the fringes of society, but he can't say if he expected him to show up.

"I had to steel myself against this psychic devastation to see your father on the street. It's hard enough to pick up somebody you don't know from the streets and then to actually have other people pick your father up – it was psychically devastating."

"I'm sure it was on the back of my mind, or on the forefront of my mind that he could walk through the door at any moment," he says. "I didn't go there on any conscious level to meet my father, so that's sort of the great cosmic joke. So even if I went to go find people to be around — men who were like my father — you never expect the real father to show up."

Nick says he felt a river of emotions when his father did show up, but then forced himself to shut down.

"I had to steel myself against this psychic devastation — to see your father on the street," Flynn says. "It's hard enough to pick up somebody you don't know from the streets, and then to actually have other people pick your father up — it was psychically devastating."

His father, he says, is now living in a long-term care facility and is "just who he is."

"Now I actually get to see him as a full human being," says Flynn. "He's still just as complicated, still just as strange, still just as filled with platitudes which seem, in retrospect, profound. One of the themes of the film that Paul picked up on ... is from a letter he wrote me from prison: We're put on this Earth to help other people. Which is actually a beautiful sentiment — it becomes ironic and twisted when he showed up at the shelter and said 'I'm the person you should help.' "

On his father's life at the shelter

"After he'd been in the shelter for a few days, then a week, then a few weeks, and I think initially there was this thing, [like], 'This has to end.' It just confused things for me. I didn't want to give him special treatment. And yet, he was getting special treatment because of who he was — because of his oversized ego and because he was my father. But it felt like he would take advantage of that."

On why he didn't bring his father in

"When I was a child, writing was the worst possible choice of a career in my family. My father had always identified himself as a writer to my mother when they met. When they met, he was writing this great novel, there was no doubt about it. Part of why she left him was this delusion of greatness and identifying it very directly with being an artist. We were not a family of artists. That was not a viable life choice. I became an electrician after high school. But I always had this thing in me to write. But it was always a little shameful. To say you were a poet was saying you were kind of crazy, and I carried that around for a long time. I still kind of carry that. And I think it might be true, actually."