Accessibility links
Movie Review - 'Project X' Three high school students throw an "epic" party that soon descends into chaos. Critic Andrew Lapin says there are movies about hard-partying teenagers that can charm while freestyling on the edge of decency. Ugly, hedonistic and aiming to appall, Project X isn't one of them. 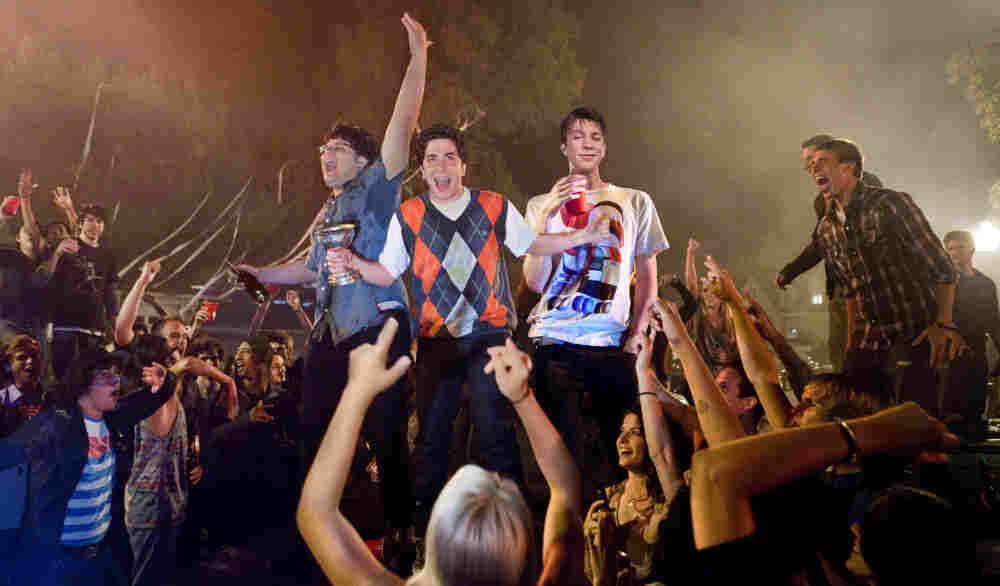 'Point Of The Party'

Self-delusion is the name of the game for the little rascals at the heart of Project X, a movie about teenagers who will destroy lives for a shot at being cool. These guys will refer to a thousand people in one house as a "party" long after the scales tip in favor of a riot; they'll keep ogling underthings as though the substance-addled women in them still possessed any mental clarity. They will throw away futures alongside inhibitions, and remain convinced it's the right thing to do.

If these details seem horrifying, it's by design. Project X strives to appall, and it would be similarly self-deluded to pretend this jumble of ecstasy and crotch shots is anything other than repulsive. The protagonists use a different word — to them, everything is "epic," a handy misdirection that implies events so big they're out of your jurisdiction.

Even the baseline is a queasy one: Project X is a found-footage film seen through digital camcorders and iPhones, so the characters come across primarily as blurs. The Birthday Blur is Thomas (Thomas Mann), who looks gawky and dazed when his face is in a position to be seen. His Best-Friend Blur is Costa (Oliver Cooper), one of the most obnoxious onscreen chatterers in many a moon. Costa bullies his friends to get what he wants, which in this case is a rockin' party while Thomas' parents are out of town. The third Blur, a doof from the McLovin' school (Jonathan Daniel Brown), exists primarily to be a punching bag for Costa's rampant homophobia.

Thomas' house, with its pool, moon bounce, DJ-friendly balcony and a backyard that appears to expand a little with every hundred new arrivals, is like something out of The Sims. The attendees launch a blitzkrieg through every room and motor vehicle, awash in a demonic camcorder glare. Girls said to be 17 years old sprawl on couches and beds in compromising positions.

There are parallels between Project X and real-life Australian party boy Corey Delaney, who in 2008 invited 500 people over to his house while his parents were out of town. There's one key difference: Delaney displayed more acerbic wit in a 3-minute television interview — "I'll say sorry, but I'm not taking off my sunglasses" — than any of the Blurs can manage in an 88-minute feature.

The movie is not really a comedy, though; it has its feet firmly planted in the lo-fi luridness of Girls Gone Wild and Backyard Wrestling, where the camera is only a primitive tool for capturing grainy, trashy spectacle. And what a spectacle: Director Nima Nourizadeh and screenwriters Matt Drake and Michael Bacall plumb the depths of hedonism by giving their teenagers free reign in their pursuit of happiness.

There's a gusto in the depths to which the party sinks that is ... well, certainly not admirable, but notable, almost John Waters-like. We get montage after montage of dancing, drinking, inhaling, sweating, lip-smacking, stripping, pill-popping, vomiting and testicle-punching. Eventually the neighborhood goes up in flames, though considering the jittery vantage point, perhaps "sideways in flames" would be more accurate.

It's not impossible to make a charming film about hard-partying teenagers — even while freestyling on the edge of decency in the way that producer Todd Phillips, he of multiple Hangovers, likes to operate. Superbad did it, as did Fast Times at Ridgemont High decades earlier.

But Project X is a nasty, nasty piece of work. From the way the Blurs treat a neighbor who asks for quiet to the fact that the only person who turns down a drink is a possible psychopath, the movie is ugly in both its look and outlook. It aims for the bottom and hits the bull's-eye.