Accessibility links
'Carrie' Creators Resurrect A Legendary Flop The musical adaptation of Stephen King's novel Carrie is one of Broadway's most famous disasters. Now the show's original writers are back — with a completely reworked version. 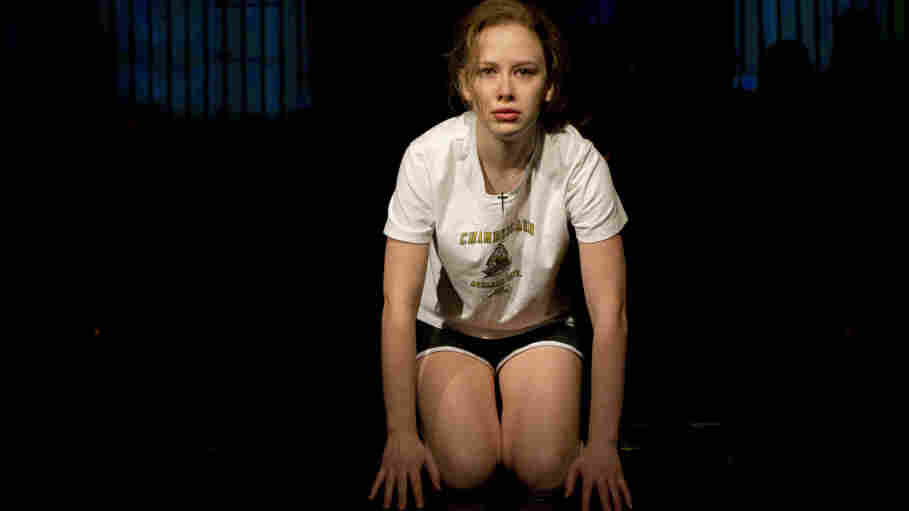 Molly Ranson plays the title role in the off-Broadway reworking of Carrie, directed by Stafford Arima and written by Lawrence D. Cohen, with lyrics by Dean Pitchford and music by Michael Gore. Joan Marcus/ hide caption

Broadway history is littered with flop musicals — but if some shows are bombs, then Carrie, based on Stephen King's best-selling 1974 novel, was kind of a nuclear bomb.

The story of a teenager with telekinetic powers who wreaks bloody havoc on her small Maine town had already been successfully adapted as a film starring Sissy Spacek in 1976. But as a musical?

Frank Rich was theater critic for The New York Times when the show opened in April 1988. He called it a musical wreck that "expires with fireworks like the Hindenburg."

'And Eve Was Weak'

"This thing was just ridiculously over-the-top and vulgar," Rich says. "It was really just a fiasco. ... It's hard to remember much about it. I do remember a pig-slaughtering number that was copious in blood, if not musicality."

After just five official performances, Carrie closed, losing its entire $8 million investment. But through the years it has developed a kind of legendary cult status. Dean Pitchford, the show's lyricist, says the creative team always felt Carrie could be salvaged.

A few years ago, Pitchford, script writer Lawrence Cohen, and composer Michael Gore returned to the show in earnest. Gore says the three writers always felt the high-gloss Broadway production 24 years ago mishandled the material and shredded much of what they wrote.

"I think, yes, it took a while to get over it," Gore says. "Had we seen a version of the show that we liked, and perhaps people didn't like it or the critics didn't like it, that's one thing. But, you know, the reason we went back to this was hopefully for us to sit through this show from beginning to end and go, 'This is what we had in mind.'" 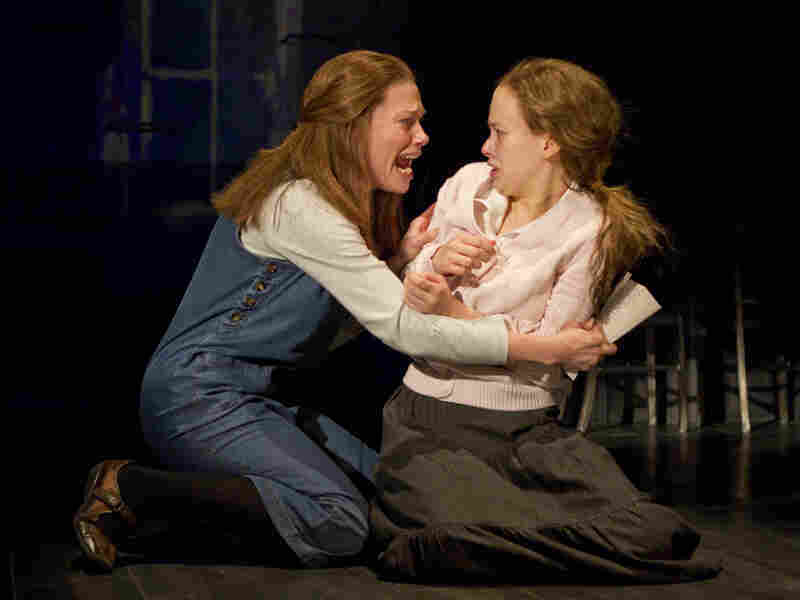 The writers hooked up with director Stafford Arima and the MCC Theatre, an off-Broadway company, to reinvestigate Carrie. They moved the story to the present — its themes of bullying are much in the news today — and, Pitchford says, they were forced to think small. On Broadway, they had a cast of 28; off-Broadway, it's half that number.

"We had a much-reduced cast, a different point of view, and all these new songs we wanted to try out," Pitchford says. "And so, we basically went through and I think we threw out, like, seven or eight songs. And we wrote six or seven songs ... and every other piece in the show has undergone change."

Carrie, of course, is still all about a teenage misfit who has the power to move objects with her mind and the suffocating relationship she has with her mother, a religious fanatic. Arima, who's set the show in a burned-out gymnasium, says the story doesn't need megabucks and mega-effects to work in a small theater.

"I think that at the core of Carrie is actually a very intimate story," Arima says. "The story about a young girl who is an outsider and how this young girl deals with the outside forces surrounding her."

But an off-Broadway budget does present real challenges. Where the Broadway version had Carrie singing a song while the objects on her make-up table levitated around her, the off-Broadway version makes do with just a few magic tricks — a tiny figurine of Jesus levitates between the girl's hands and a couple of chairs move, says actress Molly Ranson, who plays Carrie. 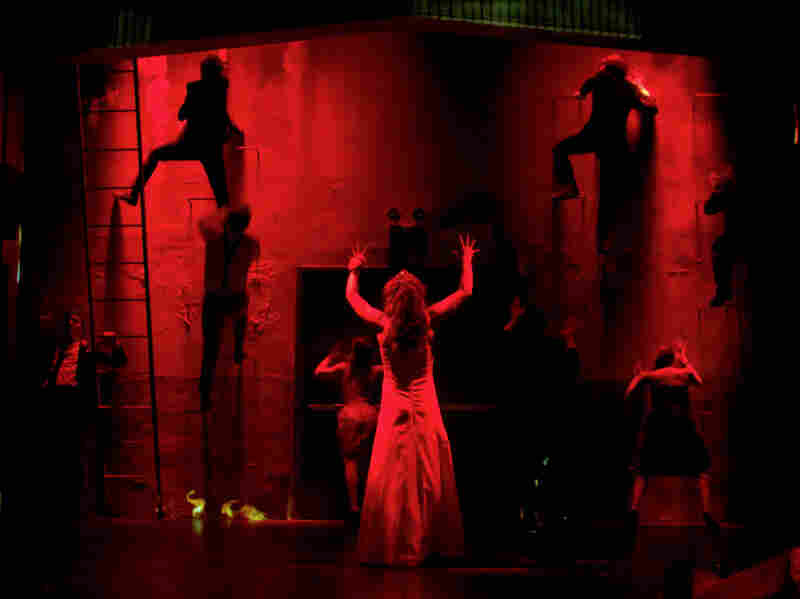 To get around some of the special effects-heavy aspects of Carrie's supernatural story, the production employs several more theater-specific strategies. Joan Marcus/O&M Co. hide caption

"That was one of the questions — of how to do the telekinesis onstage, without it being campy or without it using a lot of money for crazy special effects," Ranson says. "So, we're doing some old-fashioned magic."

And — spoiler alert — there's no stage blood spilled in the climactic scene at the prom, when Carrie violently erupts. The carnage is implied with red lights, projections and stylized movement. Director Arima says it's an artistic rather than a financial choice.

"The theatrical vocabulary becomes part of the storytelling that will keep an audience engaged in the emotional event," Arima says, "versus it purely being a special effect that might have cost, you know, thousands of dollars to rig, you know, a pail or whatever it might be."

For Marin Mazzie, the actress who plays Carrie's mother, Margaret, the appeal of the show is a lot more than special effects; it's about fleshing out the relationship between Carrie and her mother.

"She isn't just a one-note, evil, demonic, crazy religious zealot, you know?" Mazzie says. "She's a woman who has very strong beliefs and passions, and she loves her daughter and believes that she's doing the right thing. Truly, truly — even if the right thing is the most drastic thing that anyone could ever think of doing to their child."

(The most drastic thing being stabbing her child with a kitchen knife.)

So, smaller cast, smaller venue, less blood, more humanity. Is this the show composer Michael Gore says the writers had in mind?

"You know, we're all perfectionists, so I don't think we will ever go, 'That's it. You know, don't touch it,'" Gore says. "But we're really getting there. "